Overview - A vibrant beauty and celebrity of her time is trapped in an unhappy triangle with her husband and his live-in mistress. She falls passionately in love with an ambitious young politician, and the affair causes a bitter conflict with her husband and threatens to erupt into a scandal.
OVERALL
Worth a Look 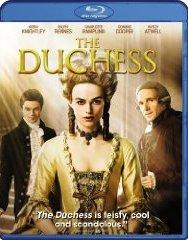 "Get me Keira Knightley." That's undoubtedly what director Saul Dibb said when it came time to cast 'The Duchess,' the sumptuous chronicle of the Duchess of Devonshire's troubled domestic existence in late 18th-century England. After all, why wouldn't the young queen of period pictures immediately spring to mind? With only a couple of exceptions, Knightley hasn't appeared in a contemporary tale since she began her tenure as plucky Elizabeth Swann in the first 'Pirates of the Caribbean' film way back in 2003. Though the actress may seem allergic to modern dress, you can't fault her for playing to her strengths. Her classic beauty, British heritage, and regal demeanor has made her a natural for such hoity-toity roles as Guinevere in 'King Arthur,' Elizabeth Bennet in 'Pride & Prejudice,' and, most memorably, Cecilia Tallis in 'Atonement.' Georgiana Spencer in 'The Duchess,' however, trumps them all; it's a part that's so much larger than life, the wispy Knightley has a bit of trouble bearing the weight of the character's elephantine wigs and notorious reputation. She gamely rises to the challenge, though, and with some terrific assistance from the always superb Ralph Fiennes, breathes life into this lavish historical drama.

In 1774, a teenage Georgiana (pronounced jor-JAY-na) is affianced to marry William Cavendish (Fiennes), the wealthy and powerful Duke of Devonshire, who lives on a sprawling, majestic estate in the English countryside. The arranged match initially excites the impressionable girl, and after her marriage, she revels in the attention her newfound stature brings. Much like Princess Diana (another Spencer, and one of Georgiana's descendants), she dazzles British society, sets fashion trends, and becomes an outspoken political activist. The public views her as a modern, evolved – if controversial – woman, yet her reactionary husband's only use for her (outside of satisfying his regimented sexual demands) is to provide him with a male heir. The task, however, proves difficult, and after two daughters, a couple of stillbirths (both boys), and countless miscarriages, relations between the duke and duchess break down. Over the years, Georgiana learns to tolerate her husband's frequent dalliances, yet when he beds her best friend, Bess (Hayley Atwell), she becomes enraged, and seeks comfort with old flame and aspiring politician Charles Grey (Dominic Cooper). The affair further strains her marriage, and multiple pressures lead her to immerse herself in frivolous pleasures, such as gambling, alcohol, and drugs, much to her detriment.

Alternately revered and reviled, Georgiana was an ahead-of-her-time figure trapped in a backward marriage and forced to make the best of her circumstances. (Parallels to Marie Antoinette, a contemporary of hers whom she casually knew, are difficult to deny.) Her elevated position was both a blessing and a curse; privileges were limitless, yet her fishbowl existence bred harsh scrutiny, and the film subtly shows how the frenzied, fickle culture of celebrity existed long before our current tabloid era. (It also makes us wonder whether happy marriages are an anomaly among British nobility.)

Dibb constructs a well-paced, eye-filling drama, and the story rarely seems stifled by its historical trappings. The novice director tries his best to steer clear of a 'Masterpiece Theater' feel, and thanks to the first-rate work of his actors, he largely succeeds. The Oscar-winning costumes, however, still steal the film, and much of the fun of this period piece lies in seeing what outlandish outfit Georgiana will don next. Knightley wears them all well, and though some of her facial expressions bug me, I can't deny she's a talented actress. She goes toe-to-toe with the riveting Fiennes (whose understated performance grounds the film) and more than holds her own. Though the ghost of Elizabeth Swann may still haunt Knightley's work, more portrayals like these will hasten the exorcism of that pesky demon.

Vagueness, however, is the movie's major fault. Much must be inferred about various relationships and behaviors, and after a while such fuzziness becomes frustrating. The Duchess of Devonshire did not lead a PG-13 life, and what seems like a concerted effort to protect that rating ultimately harms the film. Instead of feeling satisfied at its conclusion, the unanswered questions nagged at me.

On the whole, though, I enjoyed 'The Duchess.' While not as purposefully modern as Sofia Coppola's 'Marie Antoinette,' it still flaunts a contemporary feel even as it embraces the conventions of traditional historical films. The headstrong Georgiana is a memorable character, and though 'The Duchess' may not be a particularly memorable movie, it's an entertaining enough diversion for history lovers and fashionistas alike.

Historical costume dramas demand top quality video to capture all the period splendor, and though Paramount supplies a serviceable transfer that's easy on the eyes, the picture never excites the senses…and that's a shame. I can't gripe much about the 1080p/MPEG-4 AVC encode, but I can't rave about it either. Though the image remains well defined throughout with a pleasingly faint grain structure, and no dirt or debris mars the source material, the presentation never comes alive. Instead of drawing us into the film and the depicted era, the transfer keeps us detached.

The director, who seems to favor naturalism, is partly to blame, but a nagging flatness afflicts 'The Duchess' and robs it of that coveted high-def feel. Close-ups possess good detail, but lack dimensionality; contrast is fine, but there's little gradation; black levels are solid, but rarely achieve any inky depth. The muted color palette seems to be an intentional, if puzzling, choice, and while the lush greens of the English countryside enjoy lovely saturation, the costumes and makeup are ever-so-slightly shortchanged. Here we have sumptuous décor, elaborate gowns, and pageantry galore, but it all looks a hair dull. Vibrancy should be the name of the game, but instead comes at a premium.

If technical enhancements exist, they're well masked. There's no noise, even in dimly lit scenes, and I couldn't detect any banding or edge enhancement. Make no mistake, this is a perfectly good transfer; it's just not a great one. And for a film like 'The Duchess,' that's a disappointment. 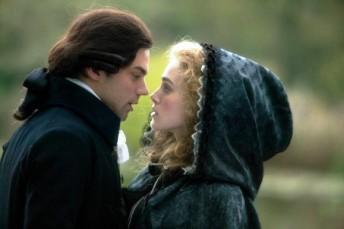 The audio is also frustratingly mundane. The Dolby TrueHD 5.1 track does what it needs to, but there's no sonic pizzazz. Dialogue drives the film, but because most lines are spoken in a dignified manner, the limits of dynamic range are only briefly tested. The mix also never takes advantage of crowd scenes, fancy balls, or atmospheric exteriors. Ambient effects are faint at best, and rarely feel at all immersive. The cavernous rooms of the Devonshire estate carry no acoustic weight and there's little noticeable stereo separation across the front channels. Though the music score benefits from good fidelity, it doesn't wrap around us like it should.

Once again, this is a fine soundtrack. No imperfections, no awkward hiccups. But there's nothing to distinguish it either. 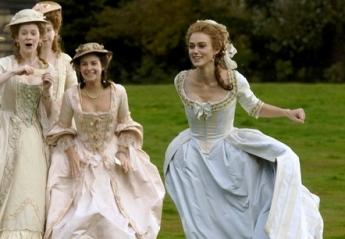 'The Duchess' isn't packed with extras, but the material that's included mirrors the quality of the main feature, and is presented in high definition.

'The Duchess' won't go down in history as one of the great biopics, but Saul Dibb's sumptuous take on the flamboyant life of Georgiana Spencer possesses enough impeccable production values, fine performances, and titillating plot points to make it worth one's time. Costume mavens will be dazzled, but history buffs might crave some supplemental reading to get a more complete picture of this controversial feminine figure. Though perfectly fine, the video and audio transfers never complement the film to the desired degree, but the extras are well produced and informative. 'The Duchess' is definitely worth a look.