The North Carolina mountains at the end of the 1920s - George and Serena Pemberton, love-struck newly-weds, begin to build a timber empire. Serena soon proves herself to be equal to any man: overseeing loggers, hunting rattle-snakes, even saving a man's life in the wilderness. With power and influence now in their hands, the Pembertons refuse to let anyone stand in the way of their inflated love and ambitions. However, once Serena discovers George's hidden past and faces an unchangeable fate of her own, the Pemberton's passionate marriage begins to unravel leading toward a dramatic reckoning.

At first glance, 'Serena' looks like a film producer's dream. A sweeping period drama about love, dishonor, and obsession set against the lush backdrop of 1929 North Carolina. The film stars Academy Award-winner Jennifer Lawrence and Academy Award-nominee Bradley Cooper, who both headlined David O. Russell's recent box office hits, 'Silver Linings Playbook' and 'American Hustle.' So with that many attributes, where could a film such as thing go wrong? How could something built to win like 'Serena' be delayed for so long, only to become a footnote in the annals of film history?

In this case, the answer lies somewhere in the production of the film, as the adaptation of author Ron Rash's 2008 novel first passed through the hands of Angelina Jolie and Darren Aronofsky, before landing Lawrence and Cooper, and getting Danish director Susanne Bier to helm the project. For whatever reason, despite the talent behind the film, and the richness of source material, the project failed to gel, and the result is a cliché-ridden, sometimes incoherent mess. But worse than the hackneyed devices and stale characters, the film, about George and Serena Pemberton, an ambitious couple looking to make a fortune in the timber industry, is tonally flat from start to finish.

There is a feeling of portent from the moment the film starts, and despite the lush visuals and production design, the story never manages to make the stunning scenery and sets amount to anything more than window dressing on an otherwise austere tale. The harshness of Bier's direction and storytelling – the feeling that anything that can go wrong will go wrong – permeates every frame of the film, leaving no room for the characters or their circumstances to breathe. And as the film's story gradually builds and becomes stuffier and stuffier, rather than crack the window and let some air in, Bier seals the portentousness in, rendering the whole thing as stale as week-old bread.

That's not for a lack of trying on the part of the cast. Lawrence is typically energetic and vivacious at times in her Lady Macbeth-esque role of the woman behind the man, directing his would-be empire, much to the chagrin of his business associate, Buchanan, played by David Dencik ('The Homesman'). Buchanan, a confirmed bachelor in the more compelling sense, is threatened by Serena's presence not only because of her firmness and rapport with the rough-and-tumble loggers – which the ascot-wearing businessman clearly lacks – but also because of the diminished role he plays in the life of his friend and business partner George. 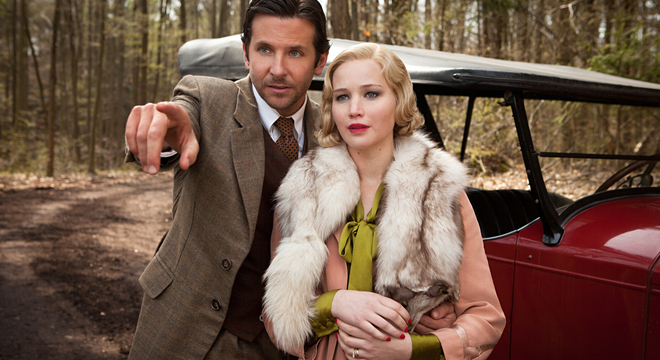 Cooper is in much the same boat as his co-star. There's richness and depth to the character the script alludes to, but only through expository dialogue about his past. Before being smitten with Serena, George was something of a good time Charlie, someone who enjoyed many a fleeting romance with women in and out of his employ. As such, a pregnant young woman, Rachel (Ana Ularu) becomes a part of the film's B-plot, with heavy suggestion that she is carrying George's child.

Naturally, this creates friction between George and Serena, who is haunted by her own past, in which her family died in a fire that started under mysterious circumstances. Through in a creepy foreman Galloway (Rhys Ifans), who swears an oath to Serena after she saves his life following a gruesome accident, and there's enough foreshadowing to choke a horse. Unfortunately, 'Serena' allows all of that foreshadowing to play out exactly as you might expect. There's no surprise whatsoever. In fact, there isn't a hint of nuance or even the slightest fluctuation in the story's tenor to suggest that anything would happen otherwise.

One of the key set pieces of the film is a locomotive that runs through the Pemberton camp and connects to the adjacent towns throughout the area. It's a gorgeous piece of set design that aptly conveys the period in which the film is set and even provides the location for many of the key story points to unfold. Unfortunately, the story is so attached to that locomotive and the tracks on which it runs that the narrative attempts to emulate it to the detriment of the entire production. The story barrels through every scene like a steam-powered engine, maintaining a straight path through which it can run into and over incident after horrible incident, never stopping to examine the meaning or deviating from the path to explore the subtleties of the characters involved. It's just one horrible thing after another, like Bier was running down a checklist, and couldn't be bothered to look up to steer, so she set the whole thing on rails to keep it going from point A to point B.

Sweeping romances – even tragic ones – carry with them a certain amount of expectation. As such they can get away with utilizing elements that would otherwise be considered cliché. But if the aim is to highlight the tragedy, to constantly beat the viewer about the head and shoulders with it, then after a while, they become desensitized, and they stop caring. 'Serena' has all the makings of a great film, but it's missing the nuance that makes stories great. It doesn't take long before the relentlessness of the film's bleak outlook renders the audience numb, and try as it might, it doesn't do anything to help them regain any sort of sensation. 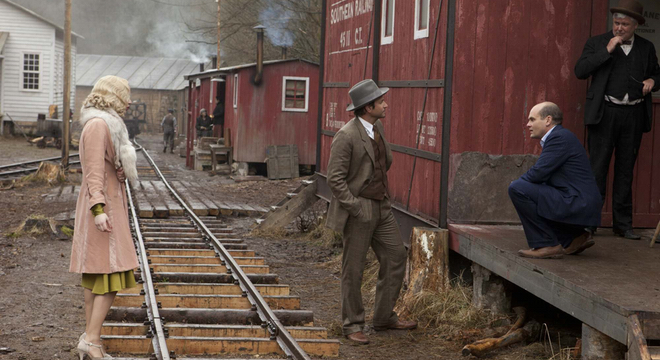 'Serena' comes from Magnolia Home Entertainment as a single 50GB Blu-ray disc in an eco-keepcase. There are a handful of previews ahead of the top menu, but they can all be skipped.

The cinematography and set design are the only reasons for anyone to watch this film. Thankfully, the 1080p AVC/MPEG-4 encoded transfer delivers a very nice image that is full of fine detail. Facial features are on full display, even though many shots seem deliberately hazy or overly golden at times. Clothing textures are also prominent, but the standout of the image would be the sweeping shots of what is supposed to be 1929 North Carolina. The lush forests and rolling hills look gorgeous and are often captured in some truly beautiful lighting.

Adding to that is the unique color scheme of the film that washes everything in golden hues with hints of brown and green, matching the environment nicely. The colors are vibrant, but never overdone, and the occasional blue or red really pops against the earthy tones that permeate the picture. Contrast is also high, producing inky blacks and whites that never look blown out. There is the slightest hint of banding once or twice, but overall this is a splendid image.

The DTS-HD Master Audio 5.1 mix favors the sweeping score by Johan Söderqvist, but manages to balance it quite well against the dialogue and occasional sound effect. Actors are all easily heard and their voices register cleanly from start to finish. There are times when the sound effects seem to become a little overbearing, finding it hard to strike the right balance between dialogue and music, but those moments are typically not filled with terribly important dialogue.

Although the mix favors the front channels, it makes good use of the rear channels to create an atmosphere that approximates the sounds of men laboring to cut down massive trees with what would be considered rudimentary devices. The locomotive is as powerful a presence in the audio as it is visually and thematically. The ambient noise of the train station creates an immersive environment that makes the film much more exciting than it really is.

Overall, this is a good mix that delivers solid, if not perfect sound.

The Making of Serena: The Story, Direction & Characters (HD, 19 min.) – This featurette is your typical behind-the-scenes adventure that includes interviews with the cast and crew – mostly the crew – as they talk about the minute details that went into creating the film.

Exploring the Production Design and Time Period (HD, 10 min.) – This short feature feels very much like a continuation of the conversation started in the special feature listed above. There are a few additional details, but the focus is primarily on how the location shooting recreated North Carolina and the time period.

Following the Screenwriting: Comparing the Film to the Novel (HD, 5 min.) – This is just a short special feature that examines how the book and the film are alike, and what major differences there are between them.

Breaking Down the Set: Kingsport Tanner, Train Station & Main Street (HD, 5 min.) – This is another pat on the back to the production design, as they discuss how they made the train station and the tannery that help make the film look more authentic.

'Serena' is a bland movie that relies too heavily on the star power to make up for the clear lack of a compelling story at its center. The thing is, there may have once been a wonderful, sweeping epic to tell, but the way this film was composed, the end product simply feels monotonous and thin. There are some nice extras for those who got caught up in the design and cinematography, but other than that, this one is worth a rental at best.

Sale Price 11.57
List Price 16.98
Buy Now
3rd Party 9.99
In Stock.
See what people are saying about this story or others
See Comments in Forum
Previous Next
Pre-Orders
Tomorrow's latest releases