Oliver Stone concludes his Vietnam Trilogy (also including Platoon and Born on the Fourth of July) with Heaven and Earth (1993), based on the memoirs of Le Ly Hayslip. Born in a small, peaceful village in French Colonial Vietnam, Le Ly (Hiep Thi Le), like her country, is thrown into chaos inflicted equally by the Viet Cong, the South Vietnamese government, and invading American forces. Brutalized in every imaginable way, this young woman looks for rescue to an American soldier (Tommy Lee Jones), only to find more trouble in store when she comes to America as his bride.

Given that 'Platoon' and 'Born on the Fourth of July' had been two of Oliver Stone's most successful movies and that he won Best Director Academy Awards for both, it came as no surprise to anyone that he'd eventually be driven to make a third film about the Vietnam War. After all, as someone who'd actually served in it, that conflict had been a huge part of his life and continued to weigh heavily on his mind even a couple of decades later. By the time it arrived in 1993, 'Heaven & Earth' was marketed relentlessly as the stunning finale to Stone's extraordinary Vietnam trilogy. That created an enormous burden of expectation that any film would have trouble living up to.

To his credit, Stone made an effort to tackle a different aspect of the Vietnam experience in each of his films on the subject. 'Platoon' was about the front lines of combat, and 'Born on the Fourth of July' was about the struggles that veterans faced when returning home to America. For 'Heaven & Earth', the director wanted to try something unexpected and rather unconventional for a Hollywood movie – to show the war from the perspective of the Vietnamese people rather than the Americans.

To do so, Stone worked from a pair of memoirs by Le Ly Hayslip, a woman who'd suffered a lifetime of hardships, first as a naïve young girl from a rural rice-farming village, later as a Viet Cong freedom fighter, and finally as the wife of an American marine. At each stage of her life, Le Ly found herself used and mistreated – by the government of her country, by the cause she believed in, and even by the man she thought was the answer to her prayers. Her story, Stone felt, offered a convenient analogy for the turmoil that her country itself had gone through during the time period.

It was perhaps too convenient an analogy. Although the material certainly provides a lot of fertile ground for drama, Stone's telling of it is a little too simplistic and melodramatic. Le Ly's village is of course an idyllic paradise until spoiled by the intrusion of warmongering Americans. During her time with the Viet Cong, Stone wallows in the harrowing nightmare of violence and rape. When she comes to the United States as a war bride, the director introduces heavy-handed satirical elements about her problems adjusting to the culture of consumerism and excess. By the time her American husband (Tommy Lee Jones, who doesn't show up until an hour into the picture) loses his shit in an explosive PTSD meltdown, the woman has borne more indignities than Job.

First-time actress Hiep Thi Le is put through an emotional wringer in the role and largely survives without exposing too much of her inexperience. As is a standard convention in Hollywood productions, almost all of the dialogue is performed in English, even when the characters are supposed to be speaking Vietnamese. That creates some awkward problems when scenes in which they speak clearly and fluently are contrasted against later scenes where they speak broken and mangled English to the Americans.

Upon its release, 'Heaven & Earth' was greeted to mixed reviews from critics and was a box office bomb. Nevertheless, the film contains some striking imagery and several intense and emotionally gripping sequences. It's a work of noble intentions as well as considerable craftsmanship and artistry. The movie may not measure up to Oliver Stone's best efforts (including 'Platoon' or 'Born on the Fourth of July', which it unavoidably begs comparison to), but is at least an interesting footnote in the director's career.

'Heaven & Earth' comes to the Blu-ray format from Twilight Time, under license from Warner Home Video. The disc is a limited edition with a pressing run of only 3,000 copies. Like most Twilight Time releases, the Blu-ray has a boring static menu.

I knew I was in trouble as soon as the opening prologue text appeared on screen and I saw that the letters were a nasty, jagged and pixelated mess. For a few seconds, I held out some hope that this might be an isolated problem that would clear up momentarily, or that perhaps the text itself was originally created as a low-res video overlay (unlikely, but possible). Unfortunately, no, the whole movie looks like that.

The Blu-ray is clearly sourced from a very old video master that Warner Bros. had sitting around. Although the disc is technically encoded at 1080p24 resolution, I assume that the transfer started as an interlaced 1080i scan that was deinterlaced after-the-fact by the studio. It suffers the same type of ugly aliasing artifacts as some early, notoriously poor Warner Blu-rays like 'The Fugitive', 'Lethal Weapon' and 'Enter the Dragon' – all of which Warner later remastered to better results. This film, sadly, has not been remastered, even though it desperately needed to be.

Just about every shot in the movie is plagued by ghastly jaggies along the edges of objects. This problem destroys fine object detail, as well as any sense of watching a smooth or textured film-like image. Expand the following screenshots to full resolution and look closely at the highlighted areas. As bad as these shots look on a computer monitor, the movie is virtually unwatchable on a large high-definition screen. 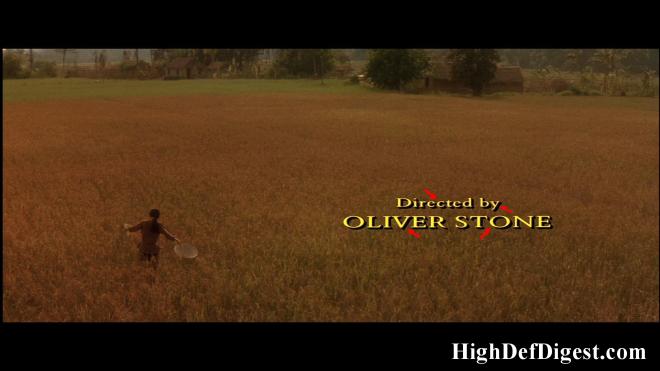 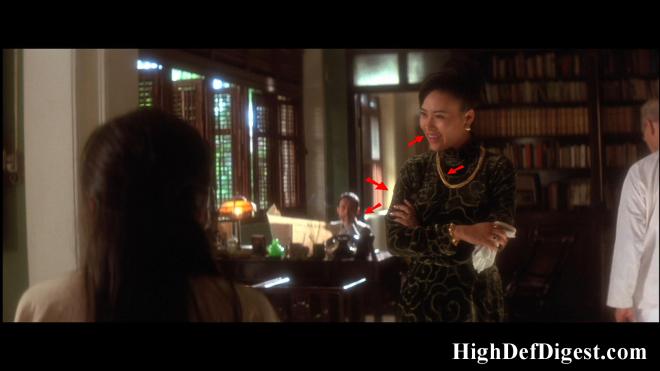 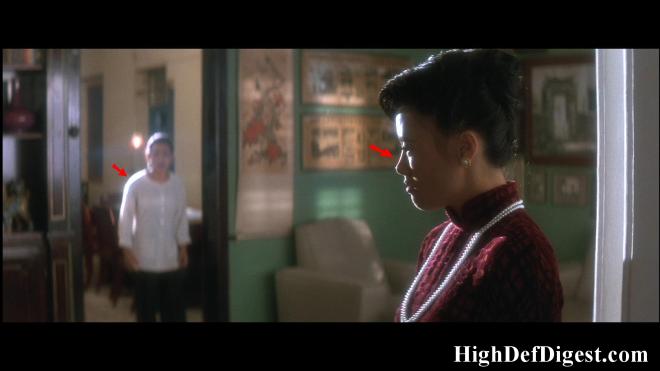 Even if not for that issue alone, the 2.40:1/AVC MPEG-4 transfer is rather soft, with frequent speckling over the film elements.

The blame for his mess rests squarely with Warner Bros., which supplied Twilight Time with the video master for the Blu-ray. With that said, Twilight Time should have taken a good look at it and rejected it. The Blu-ray should not have been released in this state. It does a terrible disservice to what was originally terrific photography by Oliver Stone's frequent collaborator Robert Richardson.

If there's any consolation or saving grace to be found here, the quality of the Blu-ray's audio is inversely proportional to the quality of its video. The DTS-HD Master Audio 5.1 soundtrack is consistently excellent, especially in the rich fidelity of the sweeping musical score by Japanese composer Kitaro.

The mix has a considerable amount of immersive surround activity, both from discrete directional effects and strong ambients in the rear channels. Although 'Heaven & Earth' isn't really a combat war movie, it has several sequences filled with exciting battle sounds (guns, bombs, jets and helicopters, etc.) and is satisfyingly bassy at times.

Viewers watching on home theater systems with more than 5.1 channels will also find that the track expands very well to 7.1 or more speakers, including height channels. The Dolby Surround Upmixer feature in my receiver did a very impressive job of pulling appropriate sounds such as wind, planes or helicopters to the top of the room.

The Twilight Time Blu-ray carries over all of the important bonus features from the old DVD released back in 2001, not that it had many of them.

The Blu-ray has no exclusive features on the disc, but does come packaged with a booklet essay by Twilight Time employee Julie Kirgo.

If you want to get picky about it, the old DVD included some cast filmography notes and a bio for Oliver Stone that weren't ported over here. I doubt anyone will miss them.

As well-intentioned as it may be, 'Heaven & Earth' is ultimately not one of Oliver Stone's best movies. Even so, it has enough merits to interest fans of the director. Sadly, the Blu-ray from Twilight Time is an ugly mess. Excellent audio quality cannot compensate for its hideous travesty of a video transfer. I can't recommend the disc to anyone but the most devoted of Oliver Stone completists.