The astonishing 'The Bridge,' by Bernhard Wicki, was the first major antiwar film to come out of Germany after World War II, as well as the nation's first postwar film to be widely shown internationally, even securing an Oscar nomination. Set near the end of the war, it follows a group of teenage boys in a small town as they contend with everyday matters like school, girls, and parents, before enlisting as soldiers and being forced to defend their home turf in a confused, terrifying battle. This expressively shot, emotionally bruising drama dared to humanize young German soldiers at a historically tender moment, and proved influential for the coming generation of New German Cinema auteurs.

War films don't typically depict the losing side of the battle, much less attempt to make members of that side seem sympathetic and human. And yet that is just what Bernhard Wicki's 1959 film 'The Bridge' attempted to do, with German soldiers from World War II and at a time when the emotional scars of the war were still very raw. It was a bold move that turned into a powerful film that portrayed the ease with which young men were captivated by national pride and an undeniable desire to take part in a conflict that would define a generation.

First and foremost, Wicki's film takes a human approach to war. By following the personal lives of a group of German teenage boys, 'The Bridge' explores how conflict appears differently when seen through the lens of burgeoning masculinity – the promise of manhood that awaits young men on the other side of battle. As the film progresses, it shows the war through a very different lens, one of harrowing firsthand experience.

The film begins near the end of the war, Germany is losing and the only ones who seem to know it are the soldiers. There is a cloud of defeat that hangs over the town from when the film's central characters live, even though fighting continues. Oblivious to what's coming, the primary group of small-town teenagers eagerly awaits their conscription notices, despite knowing that their relatively quiet lives will never again be the same.

It's here that Wicki establishes how the violence to come will impact the narrative's key players. By spending such a large amount of time with the young men, examining their home lives and evaluating the reasons each one has for eagerly joining the military, or to perhaps look at their involvement in the war with a modicum of trepidation, the filmmaker establishes an emotional throughline between the young men and the audience. Their lives seem relatively simple: they go to school, they are building a boat with their school teacher during their off time, and they sneak bottles of schnapps home from a cache of liquor one of them happened upon during some good-natured ribbing. Love plays a significant role for several of the boys, but rarely does it come in the traditional sense. At least two of the boys have their eyes on young women helping out in their households, and when it becomes apparent that the women are interested in either their fathers or older men, the impetus for joining the military becomes quite clear. 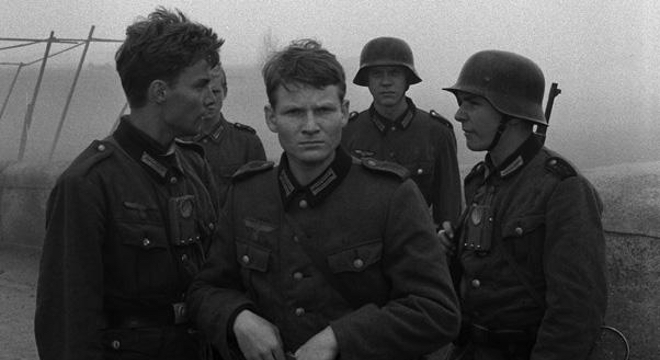 Wicki spends so much time investing in the young men and exploring their eagerness borne from naiveté that the transition from the relative carefree existence of their home life to the apathetic rigors of a 1945 German boot camp and eventually the battlefield is disquietingly effective. For some of the boys, the drills, exercises, and regimented lifestyle seem like a whole new lease on life. Two of the boys in particular had tumultuous relationships with their fathers, resulting from either jealousy or indignation over purported infidelity on the elder man's behalf. There's a subtle suggestion throughout the early part of the film that the older generation is morally compromised, complicit in the preservation of a way of life that is no longer tenable, and although they don't necessarily understand it completely, the boy's rejection of their father's behavior – either through covetousness or the tacit understanding of how a father should conduct himself – stands as an implicit rejection of the mores of the Nazi party.

These scenes also demonstrate a familiar sense of entitlement on behalf of the young men. They feel they are owed the affections of a young woman, and when that affection is not returned, they turn their back on everything but that which they feel wants them – i.e., the military. The entitlement extends into their budding military careers, as they eagerly embark on the next leg of their journey not out of a sense of national pride, but because of the sense of privilege and opportunity it will provide them. It's not until the young men are tested in battle that they begin to question whether or not they will emerge with their lives in tact.

It is that later battle that defines the film and ultimately the lives of these young men. Wicki first establishes a sense of portent, through seemingly innocuous scenes wherein German soldiers outwardly defy the authority of officers over trifling matters like cans of food. But the dangling thread of dissent soon proves to be an unspooling of the chain of command, as the young men are left to defend a small bridge from invading American forces. Following the death of their commanding officer, the boys are left to fend for themselves, choosing to engage with the enemy directly, rather than strategically utilize the destruction of the bridge to the benefit of the German forces.

What follows is a viscerally powerful illustration of the brutality of war; one filled with disorientation, panic, and fear that humanizes both sides of the conflict. Wicki wisely frames the battle through the first-time experience of the teenagers, and in doing so allows the skirmish to run the emotional gamut from victorious highs to bowel evacuating lows. Despite the violence, there is possibly no more harrowing moment than when an American serviceman recognizes the combatants as children and offers them a way out, only to have his words go misunderstood.

The result is a deeply affecting antiwar sentiment that attempts to understand the willingness to accept one place in war, even when the reason behind the war itself isn't fully comprehended. Because the film lacks the a sentiment of heroism or patriotism, it ends on a poignant note of futility, marking the true event as so unmemorable as to not even merit a place in the annals of history. And yet, because it lacks the typical jingoism of war films, this refusal of acknowledgment makes 'The Bridge' a far more relevant and prescient film. 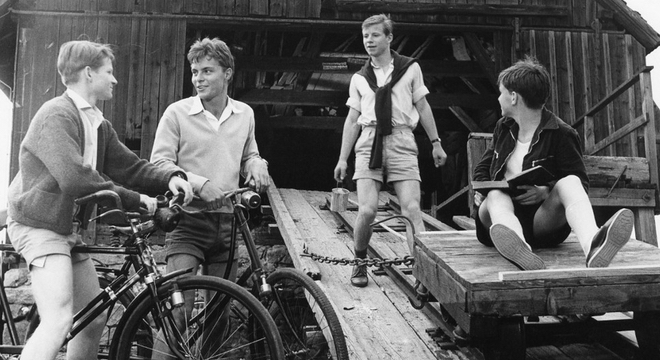 'The Bridge' comes from Criterion as a single 50GB Blu-ray disc in the standard Criterion keepcase. The spine is numbered 763, and a foldout insert containing an essay from film critic Terrence Rafferty accompanies the disc.

With its new 2K digital restoration, 'The Bridge' looks fantastic. The film's black-and-white cinematography is crisp and clear, with very little in the way of scratches or other artifacts. There are a few moments when the film wobbles slightly, almost as though the image is bulging from the center of the frame outwards, but this only happens occasionally and is a minor distraction at best.

Otherwise, the film presents a strong image that contains plenty of detail in both close-up and wider shots. Fine facial features aren't nearly as present as in today's films, but there are some details and textures available to appreciate. Mostly, though, the film makes incredible use of its high contrast to exude a tremendous sense of atmosphere, especially during nighttime sequences, when the full-bodied blacks are on display, providing further definition of the images in the foreground with surprisingly sharp edges and no trace of crush or banding anywhere.

Overall, this is a great image that does not at all look its age.

The uncompressed monaural soundtrack delivers a surprisingly layered listening experience that first delivers sharp dialogue oftentimes laid over some robust sound effects. Although the first half of the film is unassuming, devoting most of the audio to conversations and atmospheric elements, like hoofs on cobblestone streets, and the patter of background chitchat, the second half comes alive with a robust action sequence that elevates the visuals in truly cinematic fashion.

While the audio won’t truly cover the whole room, it does manage to fill it with a diverse set of sounds that are balanced against one another with great precision. Regardless of if tanks are firing at buildings, or the characters are overwhelmed with heavy gunfire, the track always makes room for dialogue to be heard clearly. This attention to balance requires certain aspects to drop away at times, and the monaural track handles this with aplomb.

This track isn't going to blow you away with its sound, but it will impress you nonetheless.

Gregor Dorfmeister (HD, 23 min.) – This is an interview with Greg or Dorfmeister who was the author of the novel that the bridge was adapted from. He recalls the events to pick up in the phone first hand.

Bernhard Wicki (SD, 15 min.) – This feature contains an excerpt from a 1989 German television show director Bernhard Wicki discusses the making of the film.

Volkner Schlödorff (HD, 10 min.) - The filmmaker focuses on the impact of the bridge on younger Germans and the generation of filmmakers collectively known as the new German cinema.

Against the Grain: The Film Legend of Bernhard Wicki (HD, 9 min.) – In this excerpt from a 2007 documentary film about Bernhard Wicki, his widow Elizabeth covers the bridge and features behind-the-scenes footage from the shoot

'The Bridge' is a unique piece of cinema history that stands out for the kind of story it told, almost as much as for the time in which it dared to tell it. This is a well-crafted film that delivers as much of an emotional punch as it does a visual one with exciting, character-driven scenes that are as strong and as compelling as the action that dominates the latter half of the film. With some intriguing extras and a truly beautiful new transfer, this is recommended.

Sale Price 20.73
List Price 39.95
Buy Now
3rd Party 16
In Stock.
See what people are saying about this story or others
See Comments in Forum
Previous Next
Pre-Orders
Tomorrow's latest releases