Twenty years after their brilliant cinema-theater experiment 'Vanya on 42nd Street,' Wallace Shawn and André Gregory reunited to produce another idiosyncratic big-screen version of a classic play, this time Henrik Ibsen’s Bygmester Solness ('Master Builder Solness'). Brought pristinely to the screen by Jonathan Demme, this is a compellingly abstract reimagining; it features Shawn (who also wrote the adaptation) as a visionary but tyrannical middle-aged architect haunted by figures from his past, most acutely an attractive, vivacious young woman (the breathtaking newcomer Lisa Joyce) who has appeared on his doorstep. Also featuring standout supporting performances from Julie Hagerty, Larry Pine, and Gregory, 'A Master Builder,' like 'Vanya,' is the result of many years of rehearsals, a living, breathing, constantly shifting work that unites theater, film, and dream.

Even though actor-writer Wallace Shawn adapted 'A Master Builder' from the Henrik Ibsen play 'Master Builder Solness' and the production was created for the stage (though never officially performed onstage) by Shawn's longtime collaborator André Gregory (My Dinner with André, Vanya on 42nd Street), the finished product by Academy Award-winning director Jonathan Demme doesn't look or move like a stage play at all. Yes, most scenes boil down to just two individuals talking with one another – usually about the past or some transcendental experience, like erecting beautiful spires and hanging wreaths from them as master builders are apparently wont to do – but the film doesn't have that sense of not knowing what to do with itself so many films based on stage plays have. You know the feeling: when you're standing listening to someone speak and you are suddenly aware you have no idea what to do with your arms. So, instead of just crossing them comfortably across your chest, putting your hands in your pockets, or just letting your limbs hang instinctively at your side, you fidget about; you try leaning this way or that, all in a futile effort to look natural. Of course, in doing this, you begin to look like the least natural person on the planet.

That is generally the case with a lot of films adapted from stage plays. But the same is simply not true with Demme's direction here. The story of a cruel but brilliant architect Halvard Solness (Shawn) and the fever dream reflection on his successes and failures is presented through the proficient use of handheld cameras, as every scene plays out within the confines of the same expansive house. It is both loose and claustrophobic at the same time. Demme's active lens oftentimes compresses his actors into a tight close-up, creating a sense of forced intimacy and an even greater sense of the need to escape. And thanks to Shawn's own clever addition to the story – that has the protagonist ostensibly at the end of his life – the need to escape is felt pervasively from the start.

And by the time the drama begins to turn the rusty, cobwebbed cranks of the old architect's corroded state of mind – thanks to the unexpected presence of twenty-two-year-old Hilde (Lisa Joyce) – that need to escape leaps from the screen, directly into the lap of the audience. 'A Master Builder' is about one man's possibly subconscious examination of his life in its final moments, and as such, the scrutiny under which Solness finds himself feels raw, inflated, and figurative as the conversation he enjoys with the enigmatic Hilde vacillates from introspective to worshipful to judgmental, often in the same scene.

In a sense, Hilde is haunting Solness. Proclaiming to have witnessed the architect place a wreath atop a great spire he once built, after he kissed the then-twelve-year-old girl and promised to return in ten years to make her a princess, she is both a figure from his past and a foreboding presence with regard to his future. And given the film and play's not-so-subtle subtext on the fear of being replaced by the younger generation, Hilde's presence as a moonfaced young woman with flowing blonde locks in a pair of short shorts is more than merely aesthetic. 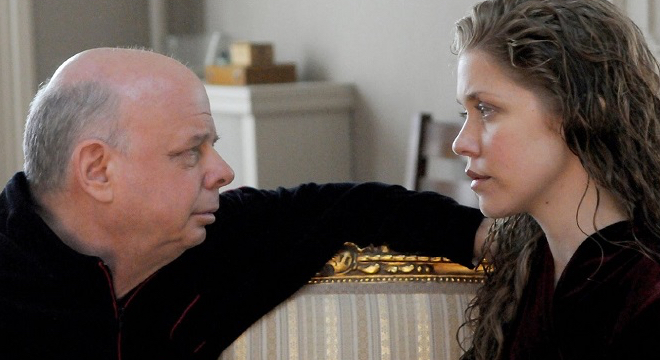 Joyce is a colossal presence onscreen and not only because Demme fills frame after frame with her wide-eyed visage. She has the kind of smile that seemingly cannot be produced reflexively; it, like everything Hilde (and Joyce) does, is calculated to such a precise degree that the very same smile suggests something else behind it. And that smile comes easily, perhaps because she has not lived around the increasingly selfish, spotlight-hungry Solness. Unlike Solness' former competitor-turned underling Knut Brovik (André Gregory) and Knut's son Ragnar (Jeff Biehl), or Solness' still-grieving wife Aline (Julie Hagerty), Hilde doesn't know what it means to live life under Master Builder Solness' enormous shadow.

Or maybe, as a potential figment of his dying brain, Hilde knows all too well. And that is where 'A Master Builder' becomes more fascinating than a simple stage-to-screen production. The entire film is as mercurial as the flaxen-haired stranger who comes to town. Demme, Shawn, and Gregory have combined to create an oddly unfixed film that even though it takes place in the confines of a single house, feels instead like a brightly-lit dreamscape, one in which sunlight streaks through gauzy windows, from which characters marvel at unseen houses and their magnificent spires. There is an entire world outside the rooms in which the narrative unfolds, but the physical confinement of the four walls of Solness' home becomes oppressive in the same way his selfish and demanding personality is. At a certain point, the only way out for anyone (Master Builder Solness included) is by following the old architect out the front door.

'A Master Builder' is slight in one sense and substantial in another. The performances are all turned up to eleven, making an otherwise quiet film about the fear of becoming useless, irrelevant, and impotent seem far louder and aggressive than it might otherwise be. It's an interesting approach, shaking someone rather than gently tapping them to get their attention, and it seems to work here, for the most part. Demme is adept at making the characters come alive onscreen, but in the end, the confinement of the setting unbalances the weight of the acting so that the mastery of the performances speaks more to the actor's craft than the narrative itself. 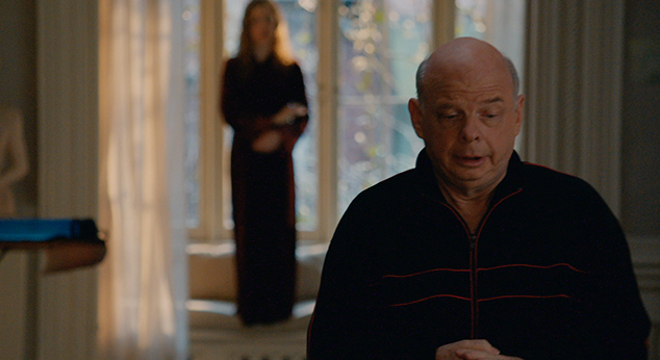 'A Master Builder' comes from Criterion with spine No. 762. It is a single 50GB Blu-ray Disc in the standard Criterion keepcase. There is also a foldout insert containing an essay from film critic Michael Sragow.

Given that the film was released in 2013, the image is unsurprisingly sharp, detailed, and warm. The color palate for the film is mostly soft white, yellow, and light brown, all of which lends an ethereal quality to the film and helps to underline the dreamlike nature to so much of the narrative. Contrast quality is apparent in nearly every frame, as although there are hardly any dark shots, the use of shadow is important, but not nearly as important as the way light cascades in from the massive windows of Master Builder Solness' house. This light is warm and inviting; it never looks blown out and therefore the image remains crystal clear from start to finish.

There is plenty of fine detail present in nearly every scene, and with the amount of close-ups the film has, this factor is quite important. Facial features and clothing textures are on full display, while background elements are visible when the otherwise shallow depth of field allows them to come into focus. Mostly, though, the image here is concerned with presenting a pristine version of the film and it certainly succeeds in doing so.

The DTS-HD Master Audio 5.1 mix is a full-bodied mix, even though it has very little to do. There is almost nothing in the film's soundtrack aside from the actor's voices. Thankfully, the mix does a great job of presenting them with the utmost clarity. Even when two actors are talking over one another (which rarely happens, actually) the sound does a good job of presenting the audio without two or more voices vying for control. Still, with this being almost all the mix has to offer, it had better be crystal clear.

There are some instances where directionality is used with some intent on making the mix into something more lively and immersive. As the camera shifts, so too does the location from which the voice is emanating. Rear channels are used subtly, typically to enforce a kind of echo in the master builder's large home.

In the end, this is a fine but unchallenging mix that suits the needs of the film very well.

Over Time (HD, 53 min.) Fran Lebowitz talks to André Gregory and Wallace Shawn about heir collaborations in theater and film.

'A Master Builder' will leave you feeling like you want more – not necessarily in the sense that you want to stay in this liminal state with these characters, but more like you only got part of a meal. That's not necessarily a bad thing, as too many films can often leave you overstuffed. There is plenty to satiate most people, from the sumptuous performances to Demme's deft directing. Still, there is airiness to the production that, despite its cleverness and fascinating dream logic might come across as underwhelming. Still, for those fascinated by Ibsen or simply love the theater, this one is definitely worth a look.

Sale Price 21.58
List Price 39.95
Buy Now
3rd Party 11.09
In Stock.
See what people are saying about this story or others
See Comments in Forum
Previous Next
Pre-Orders
Tomorrow's latest releases