The Outing / The Godsend

The Outing - An ancient genie is released from a lamp when thieves ransack an old woman's house. They are killed and the lamp is moved to a museum to be studied. The curator's daughter is soon possessed by the genie and invites her friends to spend the night at the museum, along with some uninvited guests. The genie kills them off in an attempt to fulfill her ultimate wish.

The Godsend - An English family of six takes in a pregnant woman who disappears shortly after giving birth. They raise the baby girl as their own, but over the years the strange deaths of their children make them consider whether the little girl is more than she appears.

Much like the teens boldly spending the night in the museum after hours, 'The Outing' blindly wonders about unsure of the direction it is headed. The so-called scares largely feel as if stumbled upon by accident — or the filmmakers simply decided on a scene at the last minute because the props were there and available. While the concept is somewhat ingenious and ripe with potential, the story by author and behavioral scientist Warren Chaney is a lumbering mess of laughable melodrama and hackneyed conversations. The confrontation between an African-American high school principal (Christopher Wycliff) and the blatantly racist school bully Mike (Red Mitchell) is so over-the-top awful that audiences are more likely to chuckle at its badness. Earlier, Eve (Deborah Winters), the plot's main protagonist, argues with her archeologist dad and museum curator (James Huston) over his single-parent skills, ridiculously introducing a dramatic element just so that she can thoughtlessly wish that he were dead.

Admittedly, that stupidly clichéd argument is actually evidence of clever planning because Eve happens to yell her wish with a recently discovered magical lamp nearby. So, guess what mythical wish-granting creature is overhearing this conversation and is more than ready to please a foolish teen that frees it from its supernatural prison. It's really not as silly and cheesy as it sounds because this genie is not the type commonly thought of in pop culture and cartoons. The only movie directed by first-timer Tom Daley, 'The Outing' is a more traditional understanding of the invisible spirit from Arabian and Islamic mythology, a smoke-like being that causes evil and mayhem while capable of influencing and possessing humans, which it does to the naïve Eve. The low-budget chiller was originally meant as a subtle satire on the "slasher" subgenre called 'The Lamp,' but it was unwisely cut by 18 minutes by studio heads as a routine horror flick, which explains the unintentional silliness. But sadly, the end result is a poorly executed feature, only worth watching when compared to its original cut. (Movie Rating: 2/5) 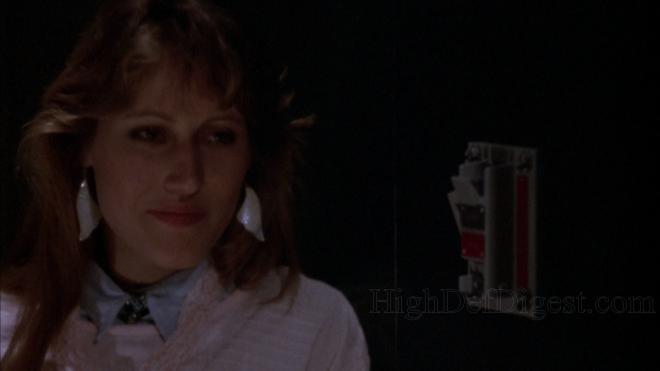 In the tradition of 'The Omen,' 'The Bad Seed,' the original 'Village of the Damned' and 'The Brood,' this British production features another innocent-looking child with homicidal tendencies and a devilish stare that will send chills down the spine. In 'The Godsend,' the child in question is the adorable Bonnie (Wilhelmina Green), a little tyke with angelic white hair and crystal-clear blue eyes. Her intensely creepy gaze was something she inherited from her scarily mysterious mother (Angela Pleasence), who abandon the kid with the welcoming Marlowe family the same night after giving birth. Pleasence, daughter of legendary actor Donald, gives one of the most memorable performances in an ultimately forgettable horror flick, and she only in it for less than a quarter of the runtime. Her fixed attention on people is disturbing, making the audience feel as uncomfortable of her devoted concentration as the characters. The talented little Green does an extraordinary job mimicking the same distressingly evil glare, adding to the creepy factor because we can almost imagine shiny daggers in her eyes.

Based on the novel by Bernard Taylor, the film adaptation, from director Gabrielle Beaumont, is a decent enough chiller with a few startling twisted moments, but it doesn't quite deliver the shock value it so clearly aims for. And this is in spite of scenes where other children are murdered by our little Bonnie lass. The plot's attraction, however, is in the mystery of the child's origins, leaving audiences to question if she might be the spawn of some malevolent spirit or the result of some devil worshiping cult, given her mother's weirdness. Right from the moment the Marlowe's youngest toddler is found dead in his crib, we're made to puzzle Bonnie's goodness. As she grows, we notice she feels particularly competitive for her adopted mother's affections, and in a family of five siblings, loving mommy Kate (Cyd Hayman) barely has enough to spare when also juggling a career and being a doting wife to Alan (Malcolm Stoddard). The film comes with a few chilling sequences and hearing dad compare Bonnie's motives to the cuckoo bird is a highlight, but the story arrives at a terribly unsatisfying conclusion that leaves us wondering the point. (Movie Rating: 3/5) 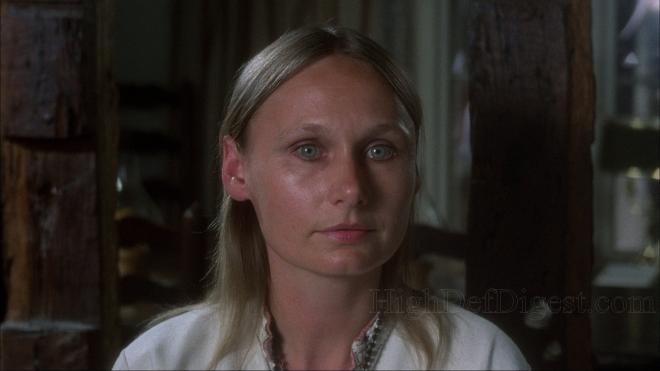 Shout! Factory brings 'The Outing/The Godsend' to Blu-ray as a double-feature single-disc release under the distributor's Scream Factory line. The Region A locked, BD50 disc containing both films is housed inside a regular blue case. At startup, the disc goes to an animated screen with music where viewers can choose between the two movies and then taken to the standard menu screen with full-motion clips.

No matter how much one rubs this lamp, no genie will suddenly pop out to wish this 1080p/AVC MPEG-4 encode to look any better than it actually does. Although the transfer offers fairly good definition and resolution, a noticeable improvement over VHS copies, much of the video is disappointingly soft and blurry. Contrast and brightness fall on the lower end of the grayscale, making for a pretty flat and dull presentation although blacks manage to be accurately rendered. The color palette is also lackluster and faded, and flesh tones appear flushed and sickly in most every scene. Along with the usual splatter of dirt and white specks, the picture also suffers from some mild telecine judder in a few spots while the photographic trick of panty-hose diffusion is distractingly visible on several occasions. (Video Rating: 2/5)

The blonde evil munchkin has aged amazingly well, and except for a very few age-related issues and a couple soft spots, the 35-year-old movie looks great on Blu-ray. The high-def transfer displays excellent, fairly sharp details and definition, revealing every individual hair atop of Bonnie's golden head and the stitching and fabric type of clothing. Facial complexions appear healthy with good, visible textures and fine lines in the faces of the cast. The 1.78:1 image comes with spot-on contrast and strong, deep blacks, making a very nice, rejuvenated presentation. Colors are clean and boldly rendered, especially primaries. (Video Rating: 4/5)

Like the video, no matter of wishing is going to improve this DTS-HD Master Audio stereo soundtrack. Despite it being generally clean and stable throughout, the presentation is actually quite boring and prosaic, not really ever doing anything noteworthy. Granted, imaging feels decently wide with a fair amount of background activity and the score spreading evenly across the entire soundstage, but it pathetically fails to ever deliver any clear distinction and separation between the frequencies, creating a noticeably uniform, shallow and largely monotonous mid-range. Things only grow worse with a tedious plain and insipid low-end that frankly adds nothing to the shows. Vocals are pretty lame and flat as if detached and withdrawn from the rest of the action, making for a very humdrum and toneless watch. (Audio Rating: 2/5)

The spooky supernatural tale also arrives with a satisfying DTS-HD mono soundtrack. Of course, like the video, the quality of the track is dependent on the condition of its source, which is actually quite good for its age, but there is the occasional pop and very mild hissing. Thankfully, it's nothing too distracting. Despite the design being limited to the center, imaging comes with a great sense of presence and clarity as it delivers lots of discrete effects to keep the listener engaged. The mid-range is extensive, making the loudest moments crystal clear without a hint of distortion, but bass is sadly lacking. Vocals can seem a bit detached in several areas, particularly the voices of the kids, but, for the most part, conversations are intelligible, making for a rather pleasing lossless mix. (Audio Rating: 3.5/5)

A pair of mostly forgotten horror flicks with a small following are given a second chance on Blu-ray. The first is the poorly edited but unintentionally funny 'The Outing' about an evil genie with a thirst for blood while the second, 'The Godsend,' is a mediocre take on the evil, murderous child plot we've seen done better in other productions. The first movie hasn't aged well and it sadly shows on Blu-ray, but the second feature arrives with a very good audio and video presentation. In the end, this bare-bones release will likely only call the attention of the most curious.

Sale Price 29.89
Buy Now
3rd Party 24.79
In Stock.
See what people are saying about this story or others
See Comments in Forum
Previous Next
Pre-Orders
Tomorrow's latest releases