Five people heist the Camp Pendleton payroll, kidnap a pilot and his daughter, who are forced to fly them to Mexico. Enroute a double cross has one of the thieves parachute with the loot into an abandoned graveyard surrounded by strange scarecrows. Two of the team jump after their loot and their former partner. Everything happens during the course of one very dark night...

Scarecrows, in themselves, can be pretty creepy, especially when the hay-stuffed mannequin in question is life-sized and wears a burlap sack that has contorted to the contours of a human face. Walking through a field of these hair-raising dummies in the pitch-black darkness of the night while they hang off large metallic crosses is a spine-chilling notion ripped from the nightmares of little children everywhere. All a good plot needs is a likeable group of characters of varying personalities and a convenient device that quickly explains why the bird decoys come alive. The concept practically writes itself, so how is it that first-time feature-length filmmaker William Wesley dropped the ball and couldn't quite deliver on the scares promised by 'Scarecrows'? Well, it's hard to say really given that Wesley does a respectable job at generating an eerie atmosphere and manages to keep audiences engaged, even at the story's silliest moments.

Continuing on these positives, the special effects for a micro-budgeted production such as this are quite impressive. Working for practically pennies and very limited resources, Norman Cabrera did a phenomenal job at bringing to life a bunch of dummies stuffed with straw and actually making them terrifying. At eighteen years of age, his dedication and attention to detail is evident in each coarsely woven cloth making the faces of the scarecrows, affording each of them with an individual personality based solely how the lightweight fabric of fibers have bonded with the rotting corpses underneath. It's understood in pure visual terms these creatures, zombies or whatever they are have been around for some time — perhaps decades, if we go by the pictures found inside a nearby house. That this comes across as clearly as it does speaks volumes of Cabrera, whose talents can still be seen in more recent projects like 'Drag Me to Hell,' 'This Is the End' and 'The Walking Dead.' 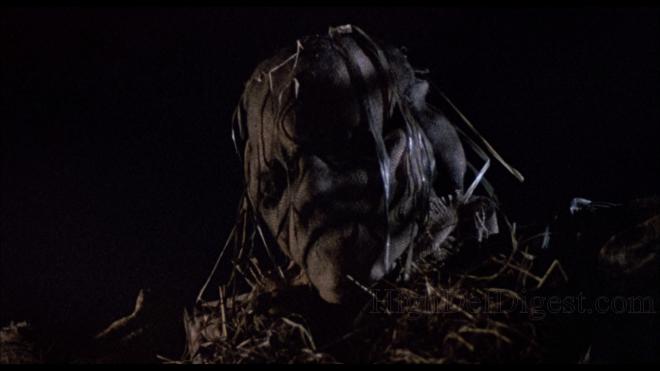 In spite of the excellent special effects and a generally strong atmospheric tone, the movie still leaves much to be desired, and that failure regrettably points back to its director, who was originally born Jose Rolando Rodriguez. Working from a script he co-wrote with four others, Wesley fails at giving audiences compelling characters worth caring for. Granted, the acting ranges from cringe-inducing to the amateur at best, none in the cast turning in Oscar-worthy performances, but in their defense, they weren't exactly given much to worth with either. The story follows a small band of mercenaries on the run after stealing three million dollars from Camp Pendleton and taking a pilot and his daughter hostage. Forced to land the hijacked plane because one member decides to backstab his team — no honor among thieves, right — the paramilitary bank robbers, including the only two innocent of any wrongdoing, not only scavenger hunt for their stolen and then stolen again loot but band together to survive the night.

Sounds simple enough, but sadly, 'Scarecrows' doesn't take full advantage of it mildly interesting premise, which often throughout its very brisk 83-minute runtime carries a strange 'Predator' vibe. The atrocious acting can be easily overlooked or ignored — or laughed at, depending on who's watching — but the characters themselves cannot. The dad isn't given enough screen time to be fully fleshed out while the daughter (Victoria Christian) possesses questionable principles — acting the uncaring hostage one minute, then seen making herself look good with a compact mirror and finally crying hysterically in the second half. The soldiers are interchangeable stereotypes smart enough to rob from a military base but too stupid to know when to run or fight. Only thing maintaining audience curiosity, which has made this direct-to-video feature into a cult favorite, is the way each of them is brutally slain and gruesomely altered into more scarecrows. The mystery of how, why and what precisely these monsters are is also a small level of enjoyment.

Shout! Factory brings 'Scarecrows' to Blu-ray under the distributor's Scream Factory line. The Region A locked, BD50 disc is housed inside the normal blue case with reversible cover art. At startup, the disc goes to a menu screen with full-motion clips while music plays in the background.

The mercenaries and the scarecrows duke it out on a great AVC-encoded transfer showing excellent definition throughout. Individual hairs and tufts of straws are detailed, the edges of leaves and blades of grass are distinct, and every tiny imperfection of the wooden house if plainly visible. Facial complexions can be revealing during mid and close-up shots, but it's not always consistent. In fact, there are several moments that seem a tad too soft and lack the expected fine layer of natural grain, suggesting the mild use of digital noise reduction though thankfully, it's nothing too egregious. Colors are very nicely saturated and cleanly rendered while contrast and brightness are terrifically well balanced with rich, deep blacks and crisp, clean whites. Although the source used appears to be in very good condition, the video still shows its age with the occasional white specks and dirt, but overall, the 1.85:1 image is sure to satisfy.

The guerilla outlaws bring guns to a supernatural knife fight with a pair of excellent DTS-HD Master Audio soundtracks: a stereo track and an updated surround sound version. The latter is surprisingly pretty good with a fair amount of discrete effects in the rears that don't fell forced, but generates a satisfying soundfield with the high-pitched chirps of crickets. And still, I found myself preferring the former listening option because it's closer to the original recording. In either case, dialogue reproduction is well prioritized and intelligible throughout while the mid-range remains clean and distinct during the few loud action sequences. Then again, there's nothing particularly impressive or noteworthy about the design either, and low bass is varied from low and faint to almost non-existent. But all things considered, the two lossless mixes get the job done.

In spite of its interesting premise, excellent special effects and a generally creepy atmosphere, 'Scarecrows' leaves much to be desired and fails to make a memorable and worthwhile movie from such a good concept. The Blu-ray from Shout! Factory arrives with a great audio and video presentation, but it's not one to really wow viewers with. Although there's not much going on in the bonus department, the overall package is sure to please many fans and makes a decent addition to the cult collection.