Overview -
The hunter becomes the hunted when Liam Neeson returns as former CIA operative Bryan Mills, who finds himself framed for the brutal murder of his ex-wife (Famke Janssen). Consumed with rage, and pursued by a savvy police inspector (Forest Whitaker), Mills must rely on his “particular set of skills” one last time to find the real killers, clear his name, and protect the only thing that matters to him now — his daughter (Maggie Grace).
OVERALL
Give it a Rent

By this time, it should be fairly clear to action audiences everywhere that the Mills family is the world's most ill-fated and luckless clan on Earth. After suffering not one but two international kidnappings where dear ole dad is tasked with using his particular skill set for the rescue, moviegoers are taken for a third and supposedly final thrill-ride in 'Taken 3.' Recycling familiar plot concepts attempting to play out like a "who-done-it" thriller, the movie goes through the usual motions only to arrive at the obvious conclusion, which anyone can easily figure out in the first ten minutes. Literally, the script, again from the minds of Luc Besson and Robert Mark Kamen, puts little to no effort into throwing our suspicions to any other culprit or possibility. The only crime worth solving in this spiritless, lackluster actioner is determining the motive, and even then, the realization is such a massive disappointment that we feel foolish for not seeing it earlier. It's not much of a surprise either, but it makes all the mayhem and destruction of the last 100 minutes all the worse.

To borrow from a surprisingly thoughtful YouTube video, 'Taken 3' is a prime example of what's wrong with the current slate of action films, especially those camouflaging a lack of originality and lazy writing with loud explosions and a hyperactive frenzy of incomprehensible stunts. The laziness in this third installment is apparent early on when our former covert operative Bryan Mills (Liam Neeson, looking pretty tired and sleepwalking his way through the entire production) is framed for murdering his ex-wife Lenore (Famke Janssen, who frankly doesn't seem all that interested or invested) and sets out to clear his name. Essentially, what is forcefully taken away from Bryan this time around is his innocence and the prospect of reuniting his family as hinted at in the beginning. In a strange cosmic irony that nears comical, the ex-wife and daughter, Kim (Maggie Grace), are once again abducted briefly for no other reason than to further piss off our somewhat likeable hero. Anyhow, it's all too evident that the plot is really a rehash of 1993's 'The Fugitive,' except that his poor man's Richard Kimble is a skilled government agent who eludes police without ever breaking a sweat, meaning he's never in any serious danger. 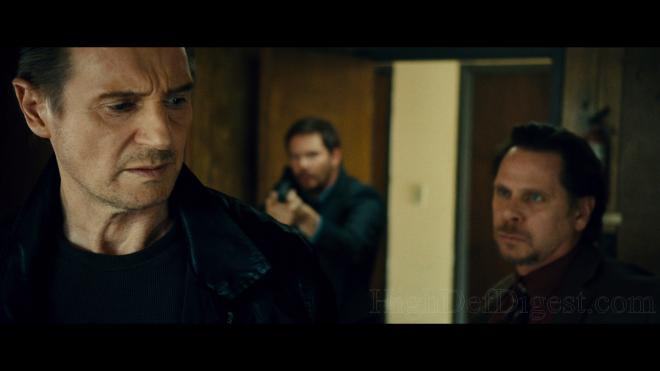 And this is where the first problem arises. Reprising the role that solidified him as the modern-day action hero by wreaking havoc upon those who endanger his family, Neeson looks slow and fatigued, as though his age is finally starting to catch up to him, yet he dishes out cans of whoop-ass like he's nonchalantly passing gas. He squints and makes pouty faces, showing a strained effort to force it out, but walks away from the scene as though he didn't deal it or it wasn't that big a deal. There's never a moment we fear Bryan in ever in jeopardy or that he will overcome those who stand in his way. Basically, he's smarter and better than anyone in the entire film, including the one possibly intelligent character, Detective Frank Dotzler (a good Forest Whitaker snapping away at a rubber band around his fingers). Although it could be argued his family is Bryan's one weak spot, the hero is practically invincible and always out of harm's way. There is never a single doubt, whether he's in handcuffs or rolling down the side of a mountain — from which he walks away unscathed, by the way! — that Bryan will succeed in his angered pursuit of vengeance.

Even the time we watched a top-secret covert operative on a furious personal quest to rescue his kidnapped daughter in 'Commando,' the muscle-bound, near Greek-god-like scope of Arnold Schwarzenegger's John Matrix revealed a vulnerable side, a small chance of failing in his action-packed hunt. In 'Taken 3,' we know from the very start Bryan will triumph, not only because he did so in two previous entries but because the villains fall miserably short of giving our hero a credible challenge or being a worthy adversary of our hero's efforts. As the late Roger Ebert once phrased it in his review of 'Star Trek II: The Wrath of Khan,' an action film is only as good as its villain, and here, the Russians are clichéd caricatures who turn out to be MacGuffins, devices that never pose any genuine threat. French filmmaker Olivier Megaton directs with pizzazz and energetic pace, but it's all to disguise the story's utter failure to provide engaging entertainment, band-aiding its awfulness with incomprehensible quick edits and the grossly overused shaky-cam. If for nothing else, 'Taken 3' is a study of how terrible action movies have become and that some aging operatives should perhaps stay retired before breaking a hip.

20th Century Fox Home Entertainment brings 'Taken 3' to Blu-ray on a Region locked, BD50 disc. The disc includes both the PG-13 theatrical cut running at 109 minutes and an unrated extended version at 115 minutes. The six-minute difference shows more action and violence, but nothing that otherwise improves upon the story. Housed inside a blue eco-cutout case with a glossy slipcover and a flyer for a Digital HD copy, the disc commences with several skippable trailers. Afterwards, viewers are taken to a screen with full-motion clips, music and generic menu options.

The third adventure following the family with the worst possible luck imaginable erupts on the screen with a stunning, reference-quality 1080p/AVC MPEG-4 encode. Whatever my thoughts on the film itself, the cinematography work of Eric Kress is simply gorgeousness and nicely preserved in this high-def presentation.

Straight from a 35mm source, the freshly-minted transfer shows an array of sumptuously rendered colors that make the Los Angeles landscape into a beautiful, scorching backdrop. Although the palette leans heavily on yellowish earth tones to reflect the City of Angels' summer heat, primaries are nonetheless pulsating with energy and gaudy intensity. Blacks are inky rich with dark, opulent shadows that penetrate deep into the screen, providing the 2.40:1 image with appreciable dimensionality and a lovely cinematic appeal. Contrast is comfortably bright and consistent with brilliant, clean whites throughout. Fine lines and objects are sharply defined. The tiniest item in the background and distance is as distinct as those in the foreground, every crevice and imperfection of the city streets plainly visible, and each lettering on posters, signs and buildings are intelligible. Skin tones appear healthy and appropriate to the climate with lifelike textures during close-ups.

While the picture is in great standing, matching the excellence of the last installment, the audio for second follow-up is somehow not quite as explosive or impressive as its predecessor. Don't get me wrong, the third, and hopefully final, entry to the franchise arrives with a great and fun DTS-HD Master Audio soundtrack. While still very good — enough to please fans, I'm sure — it's simply not as effective as the first two.

There's plenty going on in the rears, displaying a few discrete effects here and some subtle atmospherics there, but it's terribly immersive or memorable. It seems as though the design largely favors a front presentation, which thankfully isn't all that bad. Imaging feels wide and spacious with excellent channel separation and smooth, fluid movement, creating an engaging and highly enjoyable wall of sound. Dynamic range is extensive with distinct clarity between the highs and mids, and vocals remain precise and well-prioritized in the center. AlThe low-end is powerful with several well-responsive moments that give each punch some weight, every gunshot blast some oomph and several action sequences plenty of room-penetrating booms (bass chart). All in all, it's a highly-enjoyable lossless mix that definitely gets the job done.

The world's most ill-fated and luckless family on Earth is once again under threat in 'Taken 3' and only one man has the particular skill set to save them. Lacking any sense of suspense or an engaging story, the third and final entry in the franchise fails miserably — a forgettable and largely boring sequel that even fans with find difficult to defend. The Blu-ray arrives with a stunning video presentation and enjoyable lossless audio. A very small set of supplements make the overall package worth a rental at best.

Sale Price 11.85
List Price 14.99
Buy Now
3rd Party 6.99
In Stock.
See what people are saying about this story or others
See Comments in Forum
Previous Next
Pre-Orders
Tomorrow's latest releases