Tim Roth is Vincent and Paul Rhys is Theo, the brothers Van Gogh in Robert Altman’s masterful biographical film, Vincent & Theo. Filmed on location in the Netherlands and Paris where Vincent Van Gogh painted many of his works, Vincent and Theo delves inside the mind of the artist, who, while battling his inner demons created some of the greatest works of art the world has seen. Struggling in obscurity and debt, Vincent finds support from his brother Theo, an art gallery owner whose mission it becomes: to announce his brother’s genius to the world.

In 1990, Robert Altman tackled the story of one of the world's most celebrated artists in 'Vincent & Theo,' a story about Dutch painter Vincent Van Gogh. But rather than take the usual biopic route, Altman, ever the subversive filmmaker, explored the painter's career, and his battle with obscurity and mental illness, by turning his film into a story about two men (the titular brothers) and their struggle to achieve what they want for themselves and for one another.

In essence, 'Vincent & Theo' strives to tell one of the greatest "my brother's keeper" stories ever. Written by Julian Mitchell ('Arabesque,' 'Wilde'), the film eschews the usual trappings of a biographical film by creating individual conflict not only for Tim Roth's Vincent, and Paul Rhys' Theo, as they both scrap to find relevance and success in their lives, but also through the confluence of the brothers' storylines, which converge when both their ambitions are to make Vincent Van Gogh one of the greatest painters the world has ever seen.

The film begins with a depiction of the art world's most notorious irony: Most great painters don't achieve any sort of demonstrable fame until after they have died. Altman incorporates footage from a Christie's of London auction into the opening sequence, in which bidding for Van Gogh's Sunflowers begins at just under $10 million, and as scene unfolds, fading to Vincent and Theo arguing over money in a squalid apartment, that irony becomes the text of the scene. In Altman-like fashion, the audio of the auction plays underneath the brothers' increasingly heated discussion about finances, during which Theo explains that his meager earnings as an art dealer grant Vincent's equally meager allowance to him. All the while, the price for a single Van Gogh painting climbs above the $20 million mark.

There is no evidence that Theo's sacrifice pressures Vincent in any way. In fact, Roth's terrific performance, depicting the artist's extreme solipsism, is aided by Mitchell's script, so that every encounter between the siblings turns into a question of: What can Theo do to make Vincent's life better? From the depiction of Theo's responsibilities: paying for his brother's subsistence, promoting his artwork, and handling his own affairs – which include managing an art gallery, wedding the sister of his close friend, eventually having a child, and battling syphilis – a parallel begins to emerge. It is one that suggests ambition does not have to be entirely about one's self; it can also be the desire for the success of another. 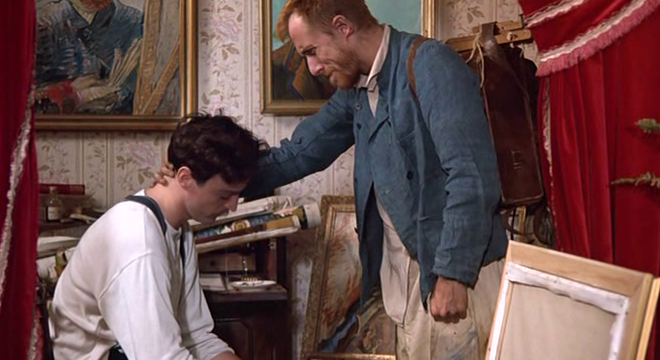 Through Altman's direction, the film's narrative unfolds as a series of moments – periods in the brothers' lives that depict the evolution of their struggle. Though linear for the most part, the story (mercifully) does not give the audience clear markers as to the time and the place of each setting, allowing the large jumps in time to bleed into one another, rather than start and stop with the announcement of a new locale and time period. That indistinct demarcation allows the film to depict moments as though they were being remembered, rather than reenacted, once more giving 'Vincent & Theo' its distinct tone.

That tone is one of endless downward spirals. Both brothers are clearly marked for a tragic end from the very beginning, as the ego-driven Vincent harangues his somewhat feckless brother for money and success, believing Theo to be his gateway to both. And while it is Vincent who has historically been more romantically linked to mental illness – thanks to his famous self-mutilation and eventual demise by his own hands – it is Theo who appears to suffer the most from a malady of the mind.

As such, Vincent is depicted as a man haunted more by his frustrations with obscurity, than by any ill health. The film does eventually delve into Vincent's psychological troubles by depicting the fraught weeks he spent with fellow painter Paul Gauguin (Wladimir Yordanoff) in Arles. This time is depicted as a mutually beneficial time that devolves into bitter conflict and contempt (possibly fueled by jealousy) that ends with Vincent cutting off a portion of his left ear and being hospitalized.

More so than any other segment in the film, the portion at Arles is both dreamlike and wrought with incredible anxiety. Altman achieves this by blending artistic competition, envy, adulation, and a dose of sexual tension to the mix. The result is a well-crafted examination of Vincent's deterioration that is free from the usual trappings of sentimentality and the romanticizing of mental illness so often depicted in other biopics.

Here, the tragedy is one that the protagonist can relate to: The time spent convalescing and de-stressing is time lost to the production of art. It is time lost to wallowing in obscurity. And for Theo, it is time lost to concerns over his brother's health that creates the schism between him and his wife, as their lives are stalled, while the younger Van Gogh becomes increasingly focused on his brother's wellbeing. At the same time, Theo's own physical and mental deterioration (as a result of syphilis), continues the brothers' parallel storylines.

Ultimately, Altman creates a powerful, sometimes harrowing film about the struggles with genius and the weight many sometimes feel in their quest to express and share that genius with the world. Where the film succeeds, then, is in depicting Theo as the protagonist of his own story, one that runs alongside his more famous older brother's. That distinction keeps the film from falling into the usual trappings of the subgenre, while at the same time allowing Altman to create a series of beautifully framed scenes – such as the last that Roth and Rhys share – depicting the disparity of familial legacy at its ostensible starting point.

The film's initial ironic focus on art's value is less important than Altman's exploration of the very personal and incomprehensible (for some) drive to commit one's life to the creation of it. 'Vincent & Theo' makes for a compelling story about artistic genius and how the internal expression of one's art is as paramount as the external reception of it. 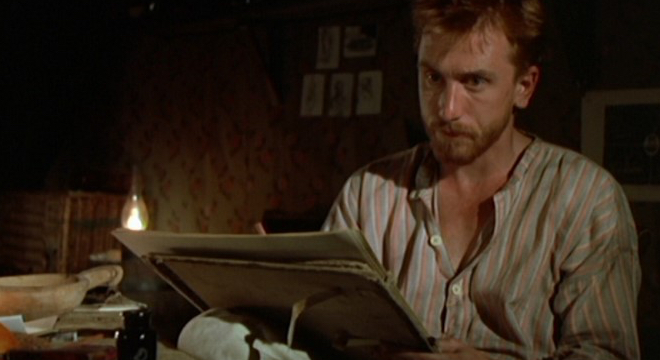 'Vincent & Theo' comes from Olive Films as a 25GB Blu-ray disc in the standard keepcase. As with all Olive films, there are no previews ahead of the top menu. The only supplement included here is the original theatrical trailer.

The 1080p AVC/MPEG-4 transfer is a hit or miss affair that occasionally offers bright scenes filled with plenty of detail and bright colors, while also bringing scenes that darken inexplicably and are further marred by the presence of screen flicker.

Brighter scenes are filled with fine detail during close-ups, which help bring things like facial features and clothing textures into focus. Wider shots do see a significant decline in the appearance of such details, but the image remains mostly solid. Edges are generally well defined, and the image rarely exhibits any problems with soft focus or grain. Colors are often bright and vivid without overwhelming the image. The palette toward the end of the film is filled with bright yellows and tans – which play up the use of Van Gogh's Yellow House.

Still many scenes are distracting because of their darkened image that is further afflicted by the presence of screen flicker. This negatively impacts many major scenes and harms the overall effectiveness of the film's otherwise gorgeous cinematography.

Although stamped with a DTS-HD Master Audio 2.0 mix, 'Vincent & Theo' is disappointing when it comes to sound. Dialogue is muddled from the very beginning, as the range in voices makes it difficult to understand what one character is saying, while the other sounds as though the pitch is off. This is most noticeable when Roth and Rhys are speaking with one another, as Roth's voice is so low it registers almost inaudible, while Rhys's dialogue often sounds off balance in comparison. The mix's inability to reconcile the two tenors is a significant problem throughout.

Still, the mix does offer some compelling music, which is balance far more evenly throughout the film. It is even well balanced with the dialogue, as it does not interfere the scenes at hand, instead it acts as it should: as an enhancement to the emotional tenor of the scene in question.

Overall, this is not a great sounding disc, but it does have certain attributes that keep it from being a complete disaster.

'Vincent & Theo' handles the biopic in a way that only a filmmaker of Robert Altman's magnitude could. Despite the temptation of both mental illness and self-mutilation, the film eschews cheap sentimentality in favor of a more poignant and powerful look into what drives a person to commit such acts of destruction, while simultaneously creating powerful works of art that will ensure their immortality. Thankfully, the picture rises above the things most people associate with Vincent Van Gogh, by focusing as much attention on the famed post-impressionist painter as it does on his lesser-known brother, without whom he might still be mired in obscurity. Although the image and sound disappoint occasionally, they are both solid enough to make this one worth a look.

Sale Price 21.94
List Price 29.95
Buy Now
3rd Party 19.98
In Stock.
See what people are saying about this story or others
See Comments in Forum
Previous Next
Pre-Orders
Tomorrow's latest releases