Cake takes us into the darkly funny world of Claire Bennett (Jennifer Aniston) who initiates a dubious relationship with a widower (Sam Worthington) while confronting fantastical hallucinations of his dead wife (Anna Kendrick). With her feisty housekeeper-cum-caretaker (Adriana Barraza) ever at her side, Claire searches for human connection and self-forgiveness in this tale of personal redemption.

While tackling deeply emotional and challenging subject matter in 'Cake,' director Daniel Barnz ('Phoebe in Wonderland,' 'Beastly'), working from a script by first-timer Patrick Tobin, does admirably behind the camera, negotiating between difficult feelings about loss and grief without spiraling into mawkish sensationalism. That much is, at least, worth commending in a movie that could have easily fallen victim to forced sentimentalism or manipulative schmaltziness on numerous occasions. Instead, Barnz remains intent on one woman's battle with bereavement, feelings of helplessness, and an uninvited sense of dependency. The somewhat restrained focus on the character simply going through her daily activities while wrestling with suicidal thoughts is what gives the production depth and gravitas. However, the final product doesn't quite deliver the emotional impact or lasting effect that it was clearly designed to. By the time the end credits roll, we are left as vacant and detached as the central character rather than hopeful as implied by the final image.

Nevertheless, the film maintains an engaging but somber pace with small bouts of humor scattered throughout, much of this thanks to a startlingly good performance by Jennifer Aniston. Arguably, not since 2002's 'The Good Girl' has the easily-recognizable A-list starlet demonstrated her acting chomps with such harrowing nuance and pathos. In fact, Aniston is a major, if not the entire reason for watching a frankly familiar plot, captivating viewers with a genuine sense of pain and a hurt that's completely internal. In the first few minutes during a support group meeting weeping the loss of one of its members, Nina Collins (Anna Kendrick), Aniston's Claire Bennett is instantly defined and understood when she unabashedly shares her loathing of Nina committing suicide from a freeway overpass. As if permanently stuck in the anger period of the five stages of grief, this is a woman writhing in hostility as if slowly learning to find comfort in her apathetic animosity towards the world. And Aniston portrays this with convincing effectiveness, snapping at others with a snarling tongue and a fierce, murderous glare. 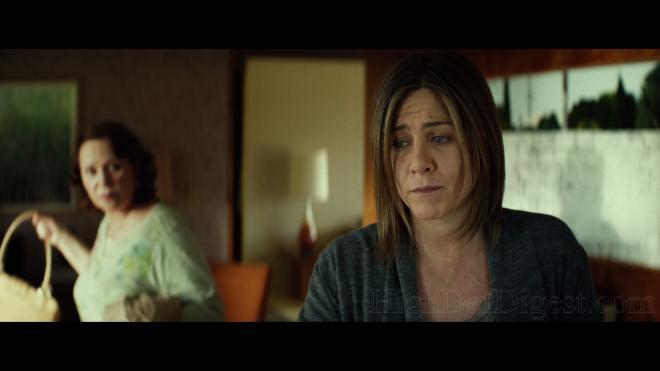 The only person ironically spared of Claire's fury is her loyal and attentive housemaid Silvana (Adriana Barraza). On the other hand, she is also made to bear witness to her employer's self-destructiveness as she continues to isolate herself from the world and slowly becomes a pill-popping addict. In some ways, Silvana is moreover Claire's enabler, driving her to new clinics in order to have different doctors write prescriptions and even going so far as to take Claire to Tijuana where laws are not as restrictive. On the bright side, while eating lunch together, the trip reveals the two women are closer than initially expected, a very small but brief glimpse of what could be seen as a friendship. There is an unspoken understanding between them, something we are not privy to because we have yet to be told of Claire's accident, of what specifically left her physically scarred and stiff, unable to turn her head well. It's these little touches and fleeting moments which really keep our interests, learning more about Claire and the still very raw tragedy that changed her life.

And again, Aniston delivers a remarkable and unforgettable performance, very subtle and refined while also plain and open. This can be seen best during her conversation with Nina's grieving widower, Roy (Sam Worthington). Earlier, Claire visited their home and met the husband for the first time after having delusions of Nina haunting her, likely from feelings of remorse because the two actually didn't care for one another. When Roy admits his own anger towards the world, Aniston's face brightens slightly with a very faint smirk, just enough to let viewers know Claire is not a complete loss. The simple scene, we thankfully come to find out by the end, doesn't hint at the two characters falling for each other. Rather, it's the moment Claire realizes someone else is coming from the same dark place, igniting, however small and possibly trivial, the need to rebuild. While Aniston exhibits a wealth of talent, the narrative patiently stumbles from one small step to the next, never rushing to a conclusion but leaving us wondering about Claire, which is to the film's benefit and amusement, making 'Cake' an underrated and touching gem.

20th Century Fox Home Entertainment brings 'Cake (2014)' to Blu-ray on a Region locked, BD50 disc. Housed inside a blue eco-cutout case with a glossy slipcover and a flyer for a Digital HD copy, the disc commences with several skippable trailers. Afterwards, viewers are taken to a screen with full-motion clips, music and generic menu options.

The drama debuts on Blu-ray with a highly-detailed, reference-quality 1080p/AVC MPEG-4 encode. Shot entirely on HD cameras, the digital-to-digital transfer shows lush, true-to-life colors and vibrant, energetic primaries, adding a bit of life to an otherwise somber story. Rachel Morrison's beautiful photography is faithfully depicted here, full of rich, opulent blacks throughout with inky, penetrating shadows that never ruin the finer details in the darkest portions and give the 2.35:1 image an appreciable cinematic three-dimensional feel. Contrast is comfortably bright and very well-balanced with crisp, brilliant whites, providing the video with exceptional visibility of the tiniest objects in the distance. Facial complexions are revealing with lifelike textures, exposing every pore, blemish and scar on Jennifer Aniston's face. Stitching and fabric of clothing are is terrifically well-defined, and the fine lines of buildings, cars and foliage are distinct, making this a splendid high-def presentation.

For a low-budget, poignant drama such as this, 'Cake' arrives with a great and impressive DTS-HD Master Audio soundtrack. Imaging feels broad and surprisingly spacious with clear, convincing off-screen effects, creating a terrifically welcoming and engaging soundstage. Channel separation is superbly well-balanced, showing lots of fluid panning and movement across the entire screen. Dialogue reproduction is outstanding with excellent intonation in each voice of the actors, making every nuanced performance splendidly touching. Dynamic range is extensive with distinct clarity and differentiation between the mids and highs, keeping the presentation lively and pleasing. Bass is more than adequate with several satisfying, highly responsive moments that nicely dig deep to give certain scenes an effectively heartbreaking intensity. Despite being a front-heavy presentation, the rears are occasionally employed to enhance the soundfield with discrete activity and some lifelike ambience, making the lossless mix a real joy to hear.

Tackling a deeply emotional and challenging subject matter in 'Cake,' director Daniel Barnz navigates between difficult feelings about loss and grief without spiraling into mawkish sensationalism. Showcasing a remarkable and memorable performance from Jennifer Aniston, the film sadly doesn't quite deliver the emotional impact or lasting effect that it was clearly designed to. The Blu-ray arrives with stunning, reference video and an excellent audio presentation. Bonus features are, unfortunately, light and disappointing, but the overall package is nonetheless worth a look.

Sale Price 11.98
List Price 16.99
Buy Now
3rd Party 7.94
In Stock.
See what people are saying about this story or others
See Comments in Forum
Previous Next
Pre-Orders
Tomorrow's latest releases