I was reminded of Deputy Chief Hardy (Nick Offerman) of '22 Jump Street' while suffering through 'Hot Tub Time Machine 2,' the tedious, uninspired follow-up to the superiorly funny 2010 comedy though frankly, that comedy was not nearly good enough to warrant a sequel. Admittedly, the opening here was mildly amusing and somewhat promising, deserving of a few faint chuckles, as the gang — sans John Cusack, the glue that held the first movie together — continues taking advantage of their knowledge of the future. The best laugh comes from Craig Robinson's Nick Webber highjackin' successful pop singles such as "Stay (I Missed You)," and while shooting the music video where he forgets the exact lyrics, he bumps into Lisa Loeb now working as the shoot's cat wrangler. The Grammy-award-winning singer's reaction to her own song is barely, just barely, worth the price of admission. However, the moment, along with the distant likelihood of being remotely funny, quickly fades after that.

How the voice of Chief Hardy plays in all this is his short speech to bumbling undercover cops Schmidt and Jenko telling the two to do the same thing they did the first time, to repeat the formula that made them a success. The filmmakers apparently took the satirical advice to heart, because that's pretty much what happens, down to different versions of the same raunchy idiotic gags. Yes, the plot written by Josh Heald, who also co-wrote the first film, is now a murder mystery set in the future, but at its core, it is essentially the same movie with Rob Corddry's obnoxiously selfish, self-depraved Lou Dorchen as the carelessly stupid cause for everyone traveling through time. Despite all the wealth and fame, he remains the self-centered loudmouth who acts the boor to disguise his self-hatred and emptiness. It's easy to predict how this adventure will end, but his relentless anger and crassness is not the least bit amusing. It's just sad and pathetic, leaving behind an icky gross feeling. 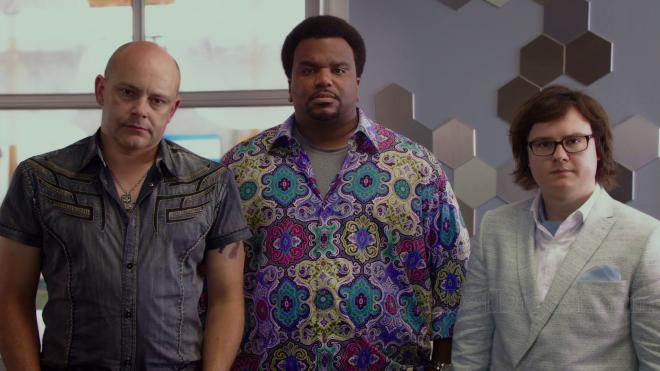 As for the others, they too go through the same motions as before where seeing their future — instead of re-experiencing their past — provides a fresh perspective on their present. Robinsons' Nick is again having marital problems, putting his music career ahead of his wife (Kellee Stewart). Ten years down the road, he is an aging pop-star embarrassingly clinging to his fame by inventing a dance that looks like he's milking a cow while swaying his hips. Lou, on the other hand, is a forgotten has-been. Clark Duke has the prospect of saving this painfully dull fiasco as Lou's son, Jacob, injecting a bit of drama when slowly learning his once-promising future actually hides his fear of becoming like his father, but it's not enough. Replacing Cusack's unfilled, withdrawn sad sack is his son Adam (Adam Scott), who basically replaces Jacob's fatherless son role, a happy-go-lucky innocent who on the eve of his wedding joins the trio to discover that he, like his father, hasn't lived life to his full potential.

Director Steve Pink, the once-promising genius behind the scripts for 'Gross Pointe Blank' and 'High Fidelity,' cashes an easy paycheck to helm 'Hot Tub Time Machine 2,' an awfully unfunny and miserable sequel more likely to cause bouts of depression than fits of laughter. As with the first movie, Pink shows a great deal of love and fondness for 80s comedies when Chevy Chase makes another appearance and says "na-na-na-na-na" — a memorable bit of wisdom from 'Caddyshack.' While Robinson compares the friends' time-traveling dilemma to the 'Terminator 2' movies, Duke's Jacob explains the split in the time continuum like a bad CliffNotes reading of 'Back to the Future 2,' which in truth is the underlying humor of both films. But sadly, this is ultimately ruined by several yawning-inducing gags about penises, dumb physical pratfalls and juvenile sex jokes that border on the homophobic. There are attempts to relive the spirit of the first movie, but it only leaves audiences wishing there was a time machine to travel back and stop this dreadful mess from being made.

Paramount and MGM Home Entertainment brings 'Hot Tub Time Machine 2' to Blu-ray as an extended, unrated two-disc combo pack with an UltraViolet Digital Copy, dubbed "Hotter & Wetter Unrated Cut." The theatrical cut is 93 minutes long and the unrated version is 99 minutes, and the six minute difference is a few extra, raunchier jokes and a surprise cameo appearance by John Cusack dressed in black at the end of the movie. The Region Free, BD50 disc sits opposite a DVD-9 copy of the movie inside a blue, eco-cutout case. At startup, viewers are taken directly to a static menu picture of the silly foursome with music playing.

The man-child gang travels back to the future with a generally pleasing but still underwhelming 1080p/AVC MPEG-4 encode. Shot digitally, the freshly-minted transfer displays excellent detailing, revealing the tiny, fine lines and wrinkles on the faces of the cast. Objects in the background are as distinct as those in the foreground while lettering on signs, cars and the many holograms seen throughout are clear and intelligible. Primaries are vibrant and full-bodied while secondary hues are cleanly rendered and energy, adding the movie's comedic tone. However, contrast largely feels uninspired and muted, making for a noticeably flat and lackluster picture, though whites remain bright and sparkling. Even more detrimental are the weak, drab black levels with murky shadows ruining many of the finer details, further adding to the overall video's drabness. Although there is still much to appreciate, the presentation is somewhat boring.

On a more positive note, the sequel shocks and engages with a surprisingly excellent DTS-HD MA soundtrack. Almost immediately from the start, the rears are employed with very subtle atmospherics that terrifically enhance and generate a satisfyingly immersive soundfield. Although many indoor sequences focus more on conversations and the many, many raunchy jokes, the listener can still hear the faint sounds of other people in the room or fancy, futuristic gadgets in the distance. During exterior scenes, the noise of traffic, the bustling clatter of a busy city and the chirping of birds overhead can be faintly heard in the surrounds. Meanwhile, the front soundstage is as equally active with several convincing off-screen effects, superb well-balanced channel separation and an extensive, room-penetrating mid-range. Dialogue is crystal clear and precise throughout, but most impressive is a powerful and highly-responsive low-end that delivers a palpable punch and depth to action sequences and the many song selections, hitting the lower octaves with gleeful intensity (Bass graph).

As if taking advice from Deputy Chief Hardy, 'Hot Tub Time Machine 2' is a tedious, uninspired follow-up to the superior 2010 comedy that frankly was not nearly good enough to warrant a sequel. Nevertheless, director Steve Pink and writer Josh Heald essentially repeat the formula of the first, except three of the four friends travel into the future to solve a murder mystery. The Blu-ray arrives with very good picture quality but a more impressive audio presentation. A small assortment of supplements round out the package, one which fans will enjoy but others will want to rent first.

Sale Price 10.98
Buy Now
3rd Party 10.98
In Stock.
See what people are saying about this story or others
See Comments in Forum
Previous Next
Pre-Orders
Tomorrow's latest releases