Jacques Rivette's 'Le Pont du Nord' takes the story of a chance encounter between two ferocious personalities and sets them loose against a surreal backdrop of Paris in the early '80s, turning an unlikely adventure across the city into a shifting, puzzle-like game, complete with its own mysterious game board.

Rivette crafts a readily recognizable world and fills it with distorted characters; namely, Marie (Bulle Ogier) and Baptiste (Pascale Ogier). The pair serve as the film's protagonists, whose literal collision in the film's opening moments sets them on a course to an even greater, and increasingly oblique collision with a mysterious group of men (all of whom Baptiste calls "Max") and Marie's former lover Julien (Pierre Clementi), as a briefcase in his possession becomes the door through which Marie and Baptiste's labyrinthine quest through Paris begins and begins to take on meaning.

The women are a unique pair. Marie, a recently paroled ex-con can't stand to be in confined spaces – she won't even enter a bakery, and instead opts to order a croissant from the front door – makes a strange companion for the paranoid Baptiste, who has a penchant for slashing the eyes of advertisements plastered around the city, and takes it upon herself to become Marie's protector. The pair quickly form a bond, after three chance encounters seemingly seal their connection and, try as she might, there's no way for Marie to shake the blissfully loyal and steadfast Baptiste. 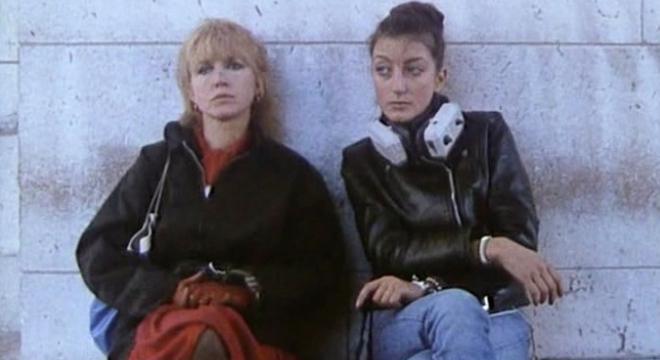 With the tour through Paris explained – or created – by their discovery of a map (that looks suspiciously like a game board) in Julien's briefcase, the women busy themselves with moving from location to location through what seems to be a combination of hazy memories and their own unreliable assumptions of the truth. They name squares on the board with a level of precision and conviction that underlines the increasingly surreal nature of it all, calling their destinations by vague, sometimes menacing names like: the inn, the bridge, the pit, the maze, and the tomb. Every square seems to be a place the two women are familiar with, and while the sites themselves look like nothing to the audience, the arrival of the Maxes at each location seems to substantiate Marie and Baptiste's theory.

The women's journey spans several days, and Rivette bounces between moments of drama and humor that soon begin to blur, as the stakes of their quest soon take on a more sinister connotation. Marie's past is unwilling to let her go and she sees a connection with it in everything she does. Her movements are based primarily on the promise of rekindling a romance with Julien, but a lingering issue he has yet to deal with stops their reunion short.

Meanwhile, Baptiste's quest becomes increasingly quixotic, striking a balance between comedy and tragedy, especially when a run in with a pair of Maxes leaves her locked in an unusual prison, and again when an amusement park ride becomes a figurative dragon for her to slay.

Rivette, shooting on a small budget and in 16mm, crafts a Paris that is unlike the city usually seen in film. Marie and Baptiste weave their way through dingy alleyways and walk across fields strewn with garbage. They enter buildings that look either half-built or half-demolished (something about the way the film seems to be relentlessly marching towards some sense of finality heavily implies the latter), and sleep on park benches or inside parked cars whose owners foolishly left them unlocked. It's only on their second night together that Marie and Baptiste find sanctuary indoors, choosing a theater showing old movies, heavily implying the escapist nature of film, both from the confinement of the theater and the viewer's own mind. And yet Rivette's camera, like Baptiste, remains steadfastly aware of Marie's proclivities and refuses to follow the pair inside.

That is the only sense of separation between the duo and the director's lens, and it is telling that they are left alone to enter into the world of another film. Otherwise, Rivette matches Marie and Baptiste's long, physical journey across the city with their equally circuitous discussions along the way. The women (operating from a script they co-wrote, along with Rivette and Suzanne Schiffman) engage in a dialogues about the nature of humankind, good and evil, and, in the case of Marie, the importance of the past shaping ones future.

While the topics are broad and certainly grand, the film puts no pressure on its protagonists or itself to arrive at any distinct conclusion. Instead, the film and its characters are carried by their shared sense of fluidity and unwillingness to be restricted by form or formula. Marie and Baptiste may be searching for answers to their quest within the confines of the swirling squares drawn onto the map in their possession, but as they journey through the maze, to the inn and the pit, only to discover the tomb, one thing becomes increasingly clear: there is a fine line between the game they are playing and the sense of definiteness indicated by its final location.

Ultimately, that game board takes on a grander implication, one that suggests an unintentional schism between the two women as shown in film's denouement. It is a separation generated by their perspectives on the game they find themselves playing, a game that gives direction and meaning to an otherwise meandering existence. For one that means reaching the end, while for the other there is a hint of a new beginning. It's up to the viewer to decide which is better. 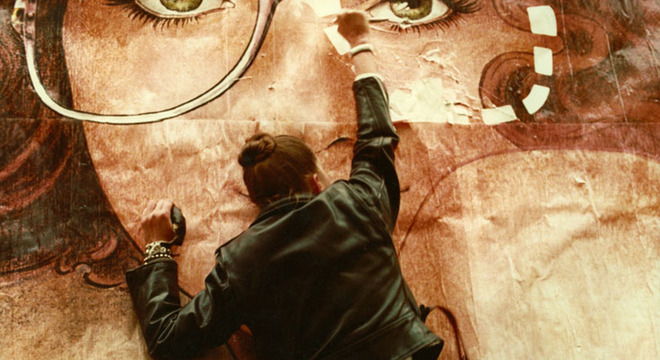 'Le Pont du Nord' comes from Kino Lorber as a single 50GB Blu-ray disc in the standard keepcase. The disc does not contain any previews ahead of the top menu, so the user is free to choose from one of the supplemental features contained on the disc or watching the film. Included is a booklet that includes original press notes for Jacques Rivette and an essay by Dennis Lim.

The film was shot on 16mm by famed cinematographer William Lubtchansky. The transfer makes great use of Lubtchanksy's work, highlighting both the city of Paris and the characters inhabiting the city. Because the film used and the fact that it was shot using natural light, there is a strong presence of grain in the image that admittedly does less the appearance of fine detail. Color is also somewhat muted as a result of the film stock being used. But these actually contribute to the overall quality of the film's look, rather than act as detriments to the transfer.

Instead, the transfer is actually quite good. Although the grain has a strong presence throughout there are few instances where it actually makes the film look bad. Additionally, the image is almost completely free from artifacts, and white noise. There are a few scratches that are noticeable at times, but they don't impact the image too negatively.

Contrast is very high throughout, as black levels produce full-bodied shadows and inky darkness that is free from banding or crush. There is an increase in the amount of grain that is detectible during the darker segments, but it only adds to the overall feel of the film. While color is somewhat muted, and the film takes on a golden hue, primary colors, like red and blue still manage to stand out and look vivid.

This is an interesting case of the transfer doing a good job of making the original image look better than it has in ages, while at the same time highlighting some of the limitations of the 16mm format. Either way, this is a nice looking disc that will certainly please fans.

The DTS-HD Master Audio 2.0 mix is fairly standard. The audio is primarily focused on making sure the dialogue between Marie and Pascale is heard clearly, and it succeeds. Voices are crisp and clear throughout, with only a hint of pitch or scratching here and there.

There is also a nice amount of ambient noise present throughout the film, which convincingly conveys the idea that these characters are exposed to the usual noises one would hear while wandering around a city the size of Paris. While the ambient noise does create a level of immersion that is unexpectedly pleasant, it does occasionally sound as though it is competing with the dialogue. Questions of balance are not an issue with the music, however, which manages to rise and fall imperceptibly when sharing the same space as the other elements of the film.

Overall, the audio here is better than average, delivering a sense of atmosphere than also generates a strong impression of place.

Composites (SD, 14 min.) – This feature is a video essay by Gina Telaroli, in which she and another woman venture through the sights of 'Le Pont du Nord,' while the actual film plays underneath. It is a visual journey that's as surreal as the film itself.

Mapping Le Pont du Nord (SD, 12 min.) – This feature is an image essay by Roland-François Lack from Thecinetourist.com. It takes viewers around the various locales of the film, showing what they look like years removed from when the film was initially shot.

'Le Pont du Nord' may not reach the heights of Rivette's 'Celine and Julie,' but the surreal fantasy he creates from filming in Paris on a shoestring budget makes a strong case for this late-career film to be revisited. The fact that his two leads are a mother-daughter pair adds additional intrigue to the complex relationship between Marie and Baptiste – a fact that is augmented by Pascale's drug-related death just three years later. This is a fascinating example of the French New Wave, as it transitions into a new decade. With a great transfer, very good audio, and some interesting supplements, this one comes recommended.

Sale Price 22.99
List Price 29.95
Buy Now
3rd Party 21.93
In Stock.
See what people are saying about this story or others
See Comments in Forum
Previous Next
Pre-Orders
Tomorrow's latest releases