The master of the political thriller, Costa-Gavras, became an instant phenomenon after the mammoth success of Z, and he quickly followed it with the perhaps even more riveting 'The Confession.' Based on a harrowing true story, the film stars Yves Montand as an influential Czechoslovak dignitary who, in the early fifties, was abducted, imprisoned, and interrogated by fellow members of his country’s Communist ruling party—their intentions vague, their methods terrifying. Also starring Simone Signoret and Gabriele Ferzetti, Costa-Gavras’s film is an unflinching depiction of a troubled historical period and the miasma of twentieth-century politics.

Based on the 1968 book by Artur and Lise London, Costa-Gavras' 'The Confession' takes viewers inside the Prague show trials of 1952, which saw a number of Communist Party officials kidnapped and interrogated by Stalinists, spurred on by Stalin's own paranoia. Eleven of the fourteen men who were detained were eventually executed. Artur London was one of three who survived, serving time in prison, rather than being hanged.

As the title would suggest, the film focuses on the actual horrific process of the Stalinists in not only obtaining a confession, but an act of self-implication. It is a nightmare of sorts, a descent into confusion and obfuscation, wherein the accused – in this case Artur (Yves Montand) a communist party official – is detained and held captive without formal charges ever being brought up by his accusers. What's worse, Gérard is never fully told what his captors want from him other than his confession. This mental gamesmanship conducted by shadowy members of the same political affiliation demonstrates how deeply distrustful Stalin's regime was of its own people, and it details a particularly dark and damning period for the Communist Party.

Rather than get into the details of asking why, Costa-Gavras looks instead at the question of how. How did these show trials obtain the confessions and self-implications of the accused that led to so many executions? 'The Confession' takes a seemingly impenetrable question of indeterminate scope, and successfully boils it down to the harrowing experience of one man. The implication being, there is some universality in his experience, in his suffering.

That man, Artur, is put in an impossible position. Not only is he in the dark about his situation – both literally and figuratively, as he spends a considerable amount of the lengthy interrogation process under a blindfold, or wearing blacked-out goggles – but as it becomes clear the party he was devoted to has now turned on him, he is forced to choose between his personal wellbeing and the ideology that ostensibly led him to this predicament. And yet, the film doesn't position Artur as a staunch idealist in the sense you might expect. He is, instead, stubborn and obstinate about one thing: the truth. And it is that to which he clings for the first few months of his lengthy ordeal. 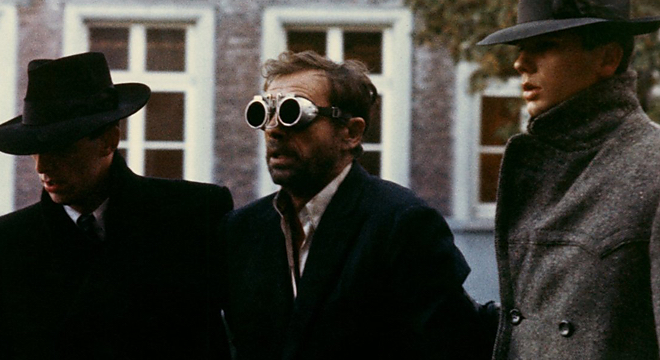 As a character, Artur is forced to react to those around him; he has no real agency in this story other than to refuse the confession his often-brutal interrogators demand of him. The character exists in a vacuum in a sense, and yet, because the director paints around Artur's situation with some deep, layered digressions that focus mainly on his wife, Lise (Simone Signoret), and her attempts to skirt politics in order to secure her husband's safe return, it works to the advantage of story, by placing the emphasis on Artur's claustrophobic situation.

In a sense, both characters feel as though they are drawn deliberately thin, they are meant to be seen as pieces in a game played by men who never appear onscreen. Montand's performance is one of endless consternation and exhaustion, and after a while it will leave you wanting more. Still, it is impressive the way Artur's agony is depicted onscreen; with little for his character to do but react, Montand's performance relies heavily on the actor's physicality. We see first hand the deterioration that London experienced by the actor's willingness to adopting a gaunt, emaciated look that sets his eyes deep in his skull, and makes his chest look as though it is about to cave in on itself.

'The Confession' is a film that relies on the audience experiencing what the protagonist does. Here, Costa-Gavras excels at depicting a sense of disorientation and dispossession, all of which underline the lengths to which his interrogators go in order to break him. As such, Artur's journey breaks down into short moments of isolation, physical exhaustion, sleep deprivation, and time spent under the aforementioned blindfolds. The film achieves a suffocating quality that seeks to leave each encounter between Artur and the men behind his abduction as breathless as possible.

But just because the scenes maintain a suffocating quality, doesn't mean the director is unable to let some air in by contrasting the men who take on the role of Artur's interrogators. Case in point, the dichotomy of the man initially charged with obtaining the confession, and Kohoutek (Gabriele Ferzetti), the man who, 21 months later, secures Artur's act of self-incrimination. In the early part of the film, the interrogators men are largely unprofessional loutish individuals, men who seem to take a perverse pleasure in their actions, without having a true goal in mind. One scene in particular depicts Artur and his oafish interrogator falling asleep, after the officer consumes a sausage sandwich and a pint of beer.

This comparison makes for a demonstrable introduction to Kohoutek's method of interrogation. The man works as a craftsman, an artist almost, who uses the misery, confusion, and exhaustion as the medium with which he works. Kohoutek is a superlative interrogator, a man seemingly without a moral code, someone capable of extracting incredibly small bits of information, and turning them into damning confessions, which become an avalanche of self recrimination that inevitably bury the person being interrogated.

In retrospect, 'The Confession' is an impressive film. Powerful and effective at boiling down the historical circumstances that create a throughline with Costa-Gavras' other films from the period; namely 'Z' and 'State of Siege'. The film expertly attacks the notion of utter devotion to abstract constructs and dogmas. And by showing the absurdity of the method of these trials, 'The Confession' demonstrates itself to be a sharp critique on the dangers of extreme political ideology. 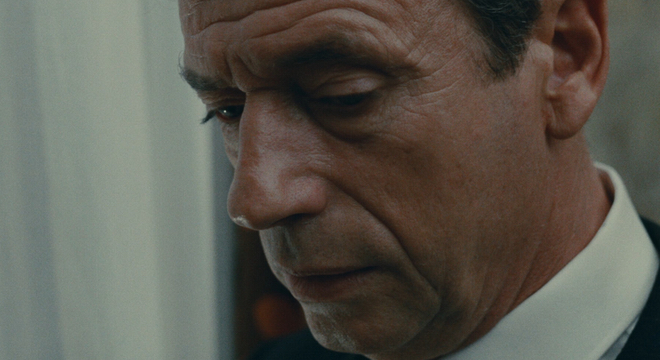 'The Confession' comes from Criterion as a single 50GB Blu-ray disc in the standard Criterion keepcase. The spine is marked No. 759, and in addition to the many supplements available on the disc there is an essay by scholar Dina Iordanova.

'The Confession' has been given a 2K digital restoration that has removed all traces of dirt, scratches, or other artifacts that would otherwise mar the image. The picture is bright, colorful, and filled with plenty of fine detail – though mostly in close-ups. During those moments, facial features are on full display, showing fine lines in the characters faces, and making Montand's gaunt, bearded face a startlingly effective example of what the film is depicting. Textures are also present during these moments, but they tend to become less prevalent in wider shots.

Contrast is very high throughout. The image has a wide gray scale, producing light shadows all the way down to deep, inky blacks that create defined edges rather than swallow the image in front of them. The image is also free from any sign of banding or crush. Although the palate is primarily grays and browns, the occasional burst of color is sharp and vibrant, without being too saturated.

Overall, this is an expectedly strong image that is likely one of the best examples of the film you're likely to see.

The DTS-HD French 1.0 track doesn't have a whole lot to do, but it manages to demonstrate some impressive depth at times. The track is primarily focused on the dialogue, which is always clear and precise, but it sometimes must share space with sound effects and the film's score. The track handles all three elements quite well, balancing them out in a way that nothing overpowers the other – while preference is generally given to the dialogue.

It's not the most dynamic of audio tracks, but it's the kind of film that relies on the power of the spoken word more than anything else. In that sense, this is a rather strong audio track that delivers what it needs to and nothing more.

You Speak of Prague: The Second Trial of Artur London (SD, 31 min.) - A 31-minute documentary about the production of the confession by set photographer Chris marker. The documentary includes footage of the actors, directors, and the writers. It originally aired on French television in 1970.

Portrait London (SD, 12 min.) - In a series of interviews that aired on French television in 1981, Artur and Lise London discuss their experience as political prisoners,, While also touching on how their life has changed since, and what their current political views are like.

Yves Montand (SD, 7 min.) - Montand touches specifically on the making of the confession and how he prepared for the role.

Francoise Bonnot (HD, 13 min.) – This is an interview conducted in 2015 by Criterion that takes a look at the editor of the confession Z and state of siege she describes her working process with the director

John Michalczyk (HD, 7 min.) - The seven-minute interview with filmmaker an author John who wrote Costa-Gavras: the political fiction film the interview was conducted in Boston in 2014

'The Confession' is a thin film with remarkably thin characters, and yet it still manages to create a compelling, and rich cinematic experience, simply because of its ability to place the viewer in the shoes of the protagonist. Montand delivers a startling physical performance that could have overshadowed his character work, but instead makes for a stronger depiction of Artur London's travails. With great picture, good sound, and some terrific supplements, this one is recommended.

Sale Price 179.99
Buy Now
3rd Party 299.99
In Stock.
See what people are saying about this story or others
See Comments in Forum
Previous Next
Pre-Orders
Tomorrow's latest releases