Charlie Chaplin’s masterful drama about the twilight of a former vaudeville star is among the writer-director’s most touching films. Chaplin plays Calvero, a once beloved musical-comedy performer, now a washed-up alcoholic who lives in a small London flat. A glimmer of hope arrives when he meets a beautiful but melancholy ballerina (Claire Bloom) who lives downstairs. An elegant mix of the comic and the tragic, this poignant film also features Buster Keaton in an extended cameo, marking the only time the two silent comedy icons appeared together on-screen. Made at a time when Chaplin was under attack by the American press and far right, Limelight was barely distributed in the United States upon its initial release, but it is now considered one of his essential and most personal works.

Regarded as the last great film by one of the cinema's early pioneers, 'Limelight' showcases the multi-faceted talents and boundless sensitivity of its iconic craftsman, Charlie Chaplin. Touching upon events and themes in his own life and family history, this understated, humorous, and deeply moving tale of a down-on-his-luck music hall performer and his May-December romance with a fragile, insecure ballerina allows Chaplin to bid a bittersweet adieu to a persona that defined him for decades and captivated moviegoers worldwide. The farewell, however, would not be quite as fond as the acclaimed actor, director, producer, writer, and composer originally envisioned. Though Chaplin would make two more motion pictures, 'Limelight' would prove to be his final American film. Swept up in the furor of the anti-Communist climate sweeping the U.S., The Little Tramp would be unceremoniously exiled from his adopted homeland for alleged Communist sympathies, and 'Limelight,' released in 1952, would not be widely seen in America for 20 more years.

When it finally premiered in Los Angeles in 1972, 'Limelight' at last became eligible for Academy Award consideration, and its lyrical music, which included a memorable theme that became a popular song, earned Chaplin his only competitive Oscar for Best Dramatic Score. (He previously received two honorary Academy Awards for his artistic contributions to motion pictures.) Though the recognition was long overdue and a thinly veiled mea culpa for the shoddy treatment afforded him by the industry he helped create and refine, it brought 'Limelight' back into the limelight, helping it achieve the visibility and respect it so richly deserved.

Aside from its insightful character studies, 'Limelight' salutes a milieu and style of performing that was highly familiar to Chaplin. The British Music Hall, a unique, time-honored venue that showcased eclectic acts in a number of disciplines and spawned an American spinoff called Vaudeville, was one of the primary forms of British entertainment from the mid-19th century to the mid-20th century. Chaplin's father was a famed music hall artist who later hit the skids, and Calvero, the proud, debonair character Chaplin portrays, strongly resembles him. A former legend undone by alcoholism who now boards in a modest rooming house and can't secure steady employment, Calvero continues to drink to excess, and in a series of dream sequences he recalls his glory days and fantasizes about making a comeback. One summer morning in 1914, upon returning home from a bender, he smells gas emanating from a neighboring flat. He breaks down the door and discovers the listless body of Thereza Ambrose (Claire Bloom), a very young, disillusioned ballerina afflicted by a bizarre paralysis that has sapped her will to live. Calvero helps Terry find a cure for her condition, nurses her back to health, and tries to bolster her spirits, even as his own situation continues to deteriorate.

Her gratitude and deep admiration for Calvero blossom into love, despite the multi-decade age difference between them, and together they each try to resuscitate their careers. Shades of 'A Star Is Born,' she is more successful than he, and when sparks fly between Terry and Neville (Sydney Chaplin), a dashing composer closer to her age, Calvero must reconcile his feelings for the delicate dancer with what he believes is best for both her personal and professional future.

"Desire is the theme of all life," Calvero says at one point, and the comment strikes a chord, sounding strangely similar to Woody Allen's future "the heart wants what it wants" pronouncement. Such a comparison is relevant, because 'Limelight' often resembles an Allen film, with its emphasis on character, bits of subtle humor with a decidedly human slant, and older man-younger woman romantic relationship. As a filmmaker, Allen often credits Ingmar Bergman as a mentor, but he also must have been influenced on some level by Chaplin, who impeccably weaves together comedy, sentiment, and a poetic lyricism in much the same manner as Allen.

And just as Allen's films often play better and exude more meaning on subsequent viewings, so too does 'Limelight.' Comprised of isolated moments that resonate with warmth and truth, the movie is difficult to digest the first time around, due to its somewhat rambling presentation and excessive length. (Two hours and 17 minutes is just too long for such a simple story.) Yet when examined in smaller doses, the impact of the mood, interplay, character beats, and Chaplin's peerless pantomimes and effortless routines become more palpable. Chaplin is the consummate performer and impresses throughout, but his schtick with fellow silent legend Buster Keaton at the end of the film - the only time these two comic icons shared the screen - remains the movie's high point. In a perfectly synchronized routine, these two classic clowns strut their stuff for eight memorable minutes. Neither utters a word, but their actions speak volumes about their talent, agility, versatility, and timing.

Bloom, at the tender age of 20, is both radiant and natural, filing a warm and intuitive portrayal. The story of Calvero and Thereza reportedly mirrors the true-life romance of Chaplin and his fourth wife, Oona, daughter of playwright Eugene O'Neill, who was only 18 (and 36 years Chaplin's junior) when they married in 1943. Bloom slightly resembles Oona, who actually appears in a long shot in 'Limelight' at the 23:55 mark, standing in for Bloom in a sequence that was reshot after principal photography was completed. Three of Chaplin's children with Oona, including their eldest, Geraldine (who would one day enjoy film success herself, most notably in David Lean's 'Doctor Zhivago') appear in the picture's opening scene, and Chaplin's son Sydney, from his marriage to Lita Grey, portrays Neville, his dad's romantic rival. Though Sydney would go on to achieve tremendous success on Broadway, originating the role of Nick Arnstein opposite Barbra Streisand's Fanny Brice in 'Funny Girl,' he's rather stiff and bland here, and his self-conscious acting makes it seem as if he's purposely trying to blend into the woodwork so he won't upstage his famous father.

After the triumphant British premiere of 'Limelight,' Chaplin set sail for New York to unveil the film in the U.S., but en route he was notified the American government cancelled his visa, making it impossible for him to enter the country. (Born in the United Kingdom, Chaplin never sought U.S. citizenship despite living in America for almost all of his adult life, a fact that fueled the Communist rumors circulating around him.) As a result, 'Limelight' only played briefly in New York City, robbing widespread audiences of the chance to see this very personal cinematic statement by a once beloved artist who had fallen hard and fast from grace. 'Limelight' isn't perfect - Chaplin's routines, though executed with aplomb and delightfully entertaining, break up the film's narrative flow and needlessly elongate it - but its deep sense of humanity and themes of hope and the revitalizing power of love and devotion make this gentle, melancholy drama one of Chaplin's best works and a revealing look at both the man himself and the soul of a performer. 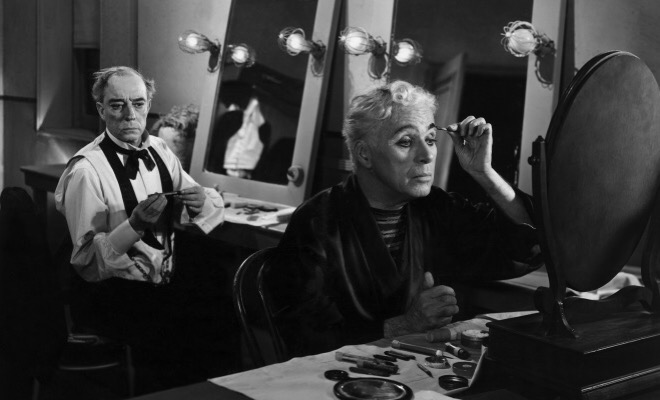 'Limelight' arrives on Blu-ray packaged in a standard Criterion case. A hefty 40-page booklet, featuring a critical essay by Peter Von Bagh, a vintage profile of Chaplin by Henry Gris, cast and credit listings, transfer notes, and numerous black-and-white scene stills and production shots, is tucked inside the front cover. Video codec is 1080p/AVC MPEG-4 and audio LPCM mono. Once the disc is inserted into the player, the static menu with music immediately pops up; no previews or promos precede it.

Newly restored in 4K from the 35 mm original negative, 'Limelight' shines in high definition, boasting terrific clarity and contrast and a beautifully varied gray scale that honors the cinematography of Karl Struss. Grain levels fluctuate a bit, but most of the time the image sports a silky smooth appearance while maintaining the look and feel of film. Only a couple of errant marks and faint vertical lines dot the pristine source material, which is distinguished by strong, rich black levels, delicate whites, and enough shades of gray to heighten details and provide a palpable sense of depth. Shadow delineation is quite good, and revealing close-ups expose all the careworn wrinkles on Chaplin's face while spotlighting Bloom's fresh-faced beauty. No crush or noise creep into the picture, and any digital enhancements have been judiciously applied and escape notice. This 1080p/AVC MPEG-4 transfer from Criterion does 'Limelight' proud and will delight fans of this warm, funny, and emotional film.

According to the liner notes, "the original monaural soundtrack was digitized at 24-bit...from the 35 mm sound negative," and the results are quite good. The LPCM mono track possesses plenty of presence and a good deal of tonal depth, and only a few errant pops and crackles intrude from time to time. No surface noise is present and no distortion creeps into the mix. Chaplin's melodic, haunting theme music, which won an Academy Award more than 20 years after the film was released, envelopes with ease, and all the dialogue is clear and easy to comprehend. Like the story, the audio track is subtle, but it supplies solid sound that suits the material well.

As usual, Criterion includes a fascinating spate of supplements that enhances our appreciation for both the film and Chaplin himself. The only thing missing is an audio commentary, but with so much other material to peruse, it's easy to forgive the omission.

Charlie Chaplin's final American film is arguably the writer-director-actor's most personal production. Like the best comedies, 'Limelight' mixes humor with pathos, yet does so with seamless ease and a light touch that heightens its human quotient. The story of an aging music hall performer on the skids who helps rehabilitate an insecure, self-destructive ballet dancer borrows heavily from Chaplin's own life, and as a result, captures his essence better than any of his previous works. Criterion's Blu-ray presentation features superior video and audio transfers and a marvelous array of supplemental material that salutes both the film and the insanely talented creative force behind it. Though a bit long and somewhat meandering, the heart of 'Limelight' beats so strongly it's impossible to ignore, which makes this subtle yet affecting comedy-drama easy to recommend.

Sale Price 21.34
List Price 39.95
Buy Now
3rd Party 16.75
In Stock.
See what people are saying about this story or others
See Comments in Forum
Previous Next
Pre-Orders
Tomorrow's latest releases