Leo McCarey's 'Make Way for Tomorrow' is one of the great unsung Hollywood masterpieces, an enormously moving Depression-era depiction of the frustrations of family, aging, and the generation gap. Beulah Bondi and Victor Moore headline a cast of incomparable character actors, starring as an elderly couple who must move in with their grown children after the bank takes their home, yet end up separated and subject to their offspring’s selfish whims. An inspiration for Yasujiro Ozu's 'Tokyo Story,' this is among American cinema’s purest tearjerkers, all the way to its unflinching ending, which McCarey refused to change despite studio pressure.

Oftentimes, a director's favorite film isn't the production that scored the biggest popular success or garnered him or her a coveted Oscar; it's a little-known gem that was a labor of love, filled with deep personal meaning, and mounted without much support from studio executives who failed to see the project's artistic and sociological merit. Leo McCarey helmed more than 100 movies (most of them silents) during his distinguished career and won two Best Director Academy Awards (for 'The Awful Truth' and 'Going My Way'), but his most cherished picture is not a sophisticated screwball comedy, passionate romance, or inspirational drama. Rather, it's a simply told, insightful, and heart-wrenching examination of the plight of elderly people that's just as relevant and moving today as it was when it bombed at the box office more than 75 years ago. 'Make Way for Tomorrow' looks at issues almost all of us face at some point in our lives with brutal honesty, uncanny perception, and a mixture of humor and pathos that makes it both identifiable and thought-provoking.

Simple yet heartfelt, and peppered with understated, finely etched portrayals, 'Make Way for Tomorrow' tackles an uncomfortable subject with honesty, warmth, and surprising wisdom. Few Depression-era directors would dare subject downtrodden audiences to a downbeat story about the trials and tribulations facing older Americans, but McCarey felt passionately about the subject. Influenced by the recent death of his own father, McCarey flung himself into this adaptation of Josephine Lawrence's novel, toiling for almost a year on the film and beseeching Paramount studio chief Adolph Zukor not to compromise the picture's message. Though the film was well respected at the time of its release, 'Make Way for Tomorrow' was a miserable commercial failure, but has since gained recognition as one of the most emotional and relevant films of the 1930s. Whether you're young, old, or middle-aged, it's easy to relate to the problems confronting the aged characters and their grown progeny, which makes the story immediate, disturbing, and so, so sad.

Parents don't want to burden their children, and children want what's best for their parents...as long as their own lives can continue to progress and flourish. That was true in 1937, and it still holds true today. Issues of duty, guilt, empathy, dependence, infirmity, and isolation swirl about this tale, and the result is an array of gut-wrenching problems that can't be easily addressed or solved. "What to do with Mom and Dad?" will be a tough question many of us will have to face at some point in our lives, and no one can prepare us how to answer it. 'Make Way for Tomorrow' depicts how one family deals with this dilemma, and allows us to debate their decisions.

When Lucy and Barkley Cooper (Beulah Bondi and Victor Moore), who have been married 50 years and are beginning to feel frail, notify their children the bank is repossessing their house and they'll soon be homeless, four of their five grown children begin to squabble about how they will shelter and protect their parents. Though all of them love their parents dearly, none of them really want them living under their respective roofs, cramping their style and becoming an emotional and physical burden. Space is also a concern. None of the children have enough room for both parents, so they split them up in the short term until more suitable accommodations can be found. Lucy will live with her son George (Thomas Mitchell), his wife Anita (Fay Bainter), and their college-age daughter Rhoda (Barbara Read) in a nice New York City apartment, while Barkley will board with daughter Cora (Elisabeth Risdon) and her husband Bill (Ralph Remley) in the country a few hours away.

Neither situation is ideal, to say the least. Barkley’s health begins to fail, which puts added strain on the already sour Cora, and Lucy’s good-natured meddling and judgmental attitude increases tension between George, Anita, and Rhoda. The stress of separation also exacts a toll on Lucy and Barkley, who feel increasingly ignored and marginalized by their offspring, and long for the comfortable companionship each has afforded the other over the years. Without much to look forward to, and realizing they must yield to the generation of tomorrow and beyond, Lucy and Barkley try to make the best of their remaining days and salvage their relationships with their well-intentioned yet selfish sons and daughters.

Bondi, one of the most natural and talented character actresses of Hollywood’s Golden Age (she’s probably best known for portraying George Bailey’s mother in ‘It’s a Wonderful Life’), was only 48 when she stepped into the shoes of Lucy Cooper, yet she’s utterly believable in the role, imbuing it with an abundance of sincerity and realism. Excellent makeup helps, but Bondi inhabits every inch of the character, making it impossible to believe she’s not 75 or older. She’s also not afraid to make Lucy an occasional pain in the butt, which lends the story proper balance by allowing the audience to empathize with the children’s predicament as well.

Moore is also quite good in a change of pace role, and together the two create a marvelous chemistry. One of the film’s most memorable sequences depicts the couple’s afternoon odyssey in New York City during a brief, touching reunion. They reminisce about their past and recall memorable moments, all while interacting in such a delicate, relaxed, and oh-so-sweet manner we can’t imagine they haven’t been married for half a century.

McCarey's simple direction strikes just the right tone, and his concentration on the characters, their reactions, and the difficult choices everyone must make heightens the sense of intimacy that permeates the picture. What's so wonderful about 'Make Way for Tomorrow' is that we're watching a family that could be our own family, and their recognizable merits and foibles strike deep chords within us. The problems of the elderly have evolved over the years, but basic elements concerning health, welfare, and relationships have not, which makes 'Make Way for Tomorrow' a meaningful, often heartbreaking, and altogether timeless film. 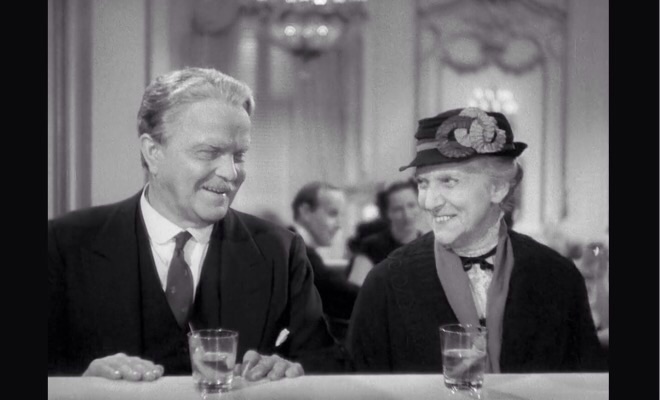 'Make Way for Tomorrow' arrives on Blu-ray packaged in a standard Criterion case. A 32-page booklet that includes three essays on the film, numerous scene stills, cast and crew listings, and transfer notes is tucked inside the front cover. Video codec is 1080p/AVC MPEG-4 and audio is LPCM mono. Once the disc is inserted into the player, the static menu with music immediately pops up; no previews or promos precede it.

'Make Way for Tomorrow' is a vintage antique, but because it didn't gain much renown until a few decades after its initial release, the film hasn't been particularly well cared for over the years. This Criterion release spruces up the image considerably, but it can't erase all the ravages of time. According to the liner notes, the 1080p/AVC MPEG-4 transfer was struck from a 35 mm fine-grain master positive, although "thousands of instances of dirt, debris, scratches, splices, warps, jitter and flicker were manually removed," the picture still looks a bit ragged. Heavier than normal grain is visible, though the levels do flucuate, and plenty of faint white vertical lines continually crop up over the course of the film. Contrast and clarity are decent at best, and the black-and-white photography by acclaimed cameraman by William C. Mellor appears rather flat and monochromatic. Background elements are a little fuzzy, but close-ups, though far from sharp, exhibit pleasing amounts of detail. Black levels are a tad anemic, but no crush creeps into the picture, and the natural presentation is devoid of any noticeable digital enhancements and artifacts. Fans of the films will be pleased with this transfer, but the inferior source material often makes the movie look as old as its main characters.

The LPCM mono track, "remastered at 24-bit from a 35 mm optical soundtrack print," supplies clear, well-modulated sound that's surprisingly nuanced. Subtle details, like the squeaking of a wooden rocking chair, add immeasurable atmosphere to the story, but a bit of hiss and surface noise remind us of the track's vintage nature. Even though much of the dialogue is softly spoken, all conversations are easy to comprehend, and Victor Young's music score exhibits a fair amount of presence and tonal depth. Dynamic range is limited, but no distortion creeps into the mix. Of course, the sound here is merely functional, but the track does its job and remains, for the most part, unobtrusive.

This release lacks the customary bounty of supplements that's the Criterion norm, but the two extras that are included are well worth watching.

Decades before 'On Golden Pond,' director Leo McCarey's 'Make Way for Tomorrow' examined the plight of the elderly with keen perception and heartbreaking sensitivity, and though it didn't capture the fancy of contemporary audiences back in 1937, it's rightly considered a timeless classic today. Circumstances may have changed over the years, but attitudes and the harsh realities of life have not, and 'Make Way for Tomorrow' depicts a universal experience with thoughtfulness, wisdom, and grace. Criterion's Blu-ray presentation skimps a bit on supplements, but the video and audio transfers nicely revive a forgotten film that hadn't been properly preserved over the years. Though this touching drama occasionally shows its age, its identifiable themes and nuanced performances make it forever relevant and easy to recommend.

Sale Price 19.9
List Price 39.95
Buy Now
3rd Party 15.9
In Stock.
See what people are saying about this story or others
See Comments in Forum
Previous Next
Pre-Orders
Tomorrow's latest releases