Gothic nightmares collide with gritty realism in this "stylish horror thriller [that] pulls you in and makes you pay attention" (Los Angeles Times)! Laced with sly humor, this "imaginative, scary" gem packs "a wow of an ending" (Leonard Maltin)! After a spine-tingling paperback catches the imagination of bookstore clerk Virginia (Jenny Wright), she seeks out the author's second book, I, Madman. But once she opens the cover, its eerie tale of obsessive love comes to life, catapulting a disfigured, scalpel-wielding killer from the world of fiction onto the streets of Hollywood with one demented goal: to win Virginia's love, one murder at a time!

Taking obvious inspiration from horror classics like 'Phantom of the Opera' and 'Frankenstein,' Tibor Takács takes the genre back to its lurid, pulp origins in 'I, Madman' where cheap thrills and overcharged sensationalism were enough to shake up audiences. At the time of its release, the "slasher" subgenre was finally starting to wane, but it was replaced with the franchise sequels, and established icons like Jason Voorhees, Michael Myers and Freddy Kruger were making a killing. However, the late 80s and early 90s were an interesting boom for the genre. While the unstoppable monster terrorizing wayward teens dominated theaters at the time, several filmmakers were a bit more daring with original ideas that borrowed from the past but also pushed for something new and fresh. Takács does precisely that with this cleverly entertaining thriller where imagination sometimes proves to be deadlier than the reality, but he also shows his love for the genre when it had more style and atmosphere.

For Virginia Clayton (Jenny Wright), her love of reading books is taken new fanatical heights when the characters of cheap pulp thrillers start taking a life of their own. She's the sort of passionate reader who can't put a book down once she starts, but she's also easily scared only a few passages in, quickly running to the phone and asking her boyfriend over for a beer in the middle of the night. And even when he's not available, still scared beyond her wits and sitting alone in her darkened apartment, Virginia can't stay away from reading about the deranged Dr. Alan Kessler (Randall William Cook), a maniac in 1950s Hollywood obsessed with starlet Anna Templar, who coincidentally looks a lot like Virginia. She shares her love of books working as a clerk at a second-hand bookstore where she discovered the first book about the unhinged doctor by little-known, mysterious author Malcolm Brand. Now, she wants Brand's second and final book where Kessler really goes off the deep end.

Part of what makes Takács' movie such a fun watch is the leveled, patient approach he takes to the tale, immersing Virginia's world with a tone drenched in an ominous, creepy feel, as if someone was constantly watching her. Bryan England's ('Sometimes They Come Back,' 'Friday the 13th Part VIII: Jason Takes Manhattan') photography adds to this unforgiving mood with deeply grim shadows that intentionally obscure a good portion of the picture, reminiscent of classic noir to effectively build suspense. This is most striking when Virginia finally begins reading from Brand's I, Madman, which mysteriously appears at her front door one night. The same style continues every time the disfigured Kessler appears in the real world from behind the darkness, now focusing his obsession upon Virginia. The warped madman kills and collects body parts from those closest to her, sowing each piece onto his own face in the hopes she might fall in love with his new looks. It's true love at first sight! 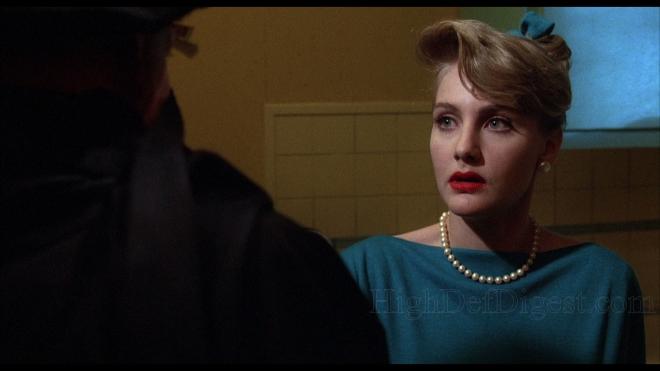 It's a bizarre, twisted tale that frankly doesn't make much sense; Kessler for no apparent reason other than Virginia's own fixation suddenly appears in the physical world and reenacts the murders from the book. And the filmmakers don't really try to import logic into the mix outside our heroine's overactive imagination. However, this lack of explanation is actually to the film's benefit because it leaves the audience to question Virginia's sanity. Could she be the one doing the killing but blaming it on a fictional character? The police department has every reason to suspect her since she's always conveniently witnessing each murder, and her LAPD detective boyfriend, Richard (Clayton Rohner of 'April Fool's Day' and 'Just One of the Guys' fame), is slowly starting to have his doubts. His gruffly, dog-tired presence is a nice addition to the film's noir sensibilities, and we really feel for the guy because she's continually embarrassing him. But like the good guy he is, he believes her up until the end when it's most crucial.

Leaving audiences to constantly question between reality and imagination and the sanity of the protagonist, 'I, Madman' is a stylishly fun and creative chiller that sadly wasn't granted the same level of attention as the director's previous, mores successful feature. Two years earlier, Tibor Takács surprised genre fans with the darkly entertaining 'The Gate,' which starred a very young Stephen Dorff. Today, he's probably better known for his work on the TV sitcom 'Sabrina the Teenage Witch' and most recently 'Spiders 3D,' but these two movies are what he should be remembered for. They came with excellent special visual effects by future Oscar-winner Randall William Cook ('Lord of the Rings' trilogy, 'Ghostbusters,' 'Fright Night'), who also plays Dr. Kessler, and gruesomely shocking makeup effects which Cook worked on with Bill Myer ('The Hunger Games' series, 'X-Men: First Class,' 'Powers'). There is much to appreciate and enjoy in this low-budget horror thriller and hopefully, it'll find some love on Blu-ray.

Shout! Factory brings 'I, Madman' to Blu-ray under the distributor's Scream Factory line. The Region A locked, BD50 disc is housed inside the normal blue case with reversible cover art. At startup, the disc goes to an animated menu with full-motion clips and music playing in the background.

The demented Dr. Kessler leaps from the pages to frighten your imagination with a great-looking 1080p/AVC MPEG-4 encode. As per usual, producers use the best available elements, which appear to be in excellent condition. And while it shows a fair amount of white specks throughout, the video is nonetheless quite attractive with stable, thin layer of natural grain, giving the presentation an appreciable cinematic quality.

Fine lines and objects are detailed, except for the few poorly resolved moments which are noticeably blurrier and softer than others. Facial complexions appear healthy with good textural definition and visible pores during close-ups. Contrast and brightness, for the most part, are well balanced, providing excellent clarity and strong shadow delineation, but highlights tend to bloom in several sequences, exposing some mild posterization and negligible mosquito noise. Blacks can come off a tad strong in a few areas, but they're deep and penetrating, giving the 1.85:1 image good dimensionality. Primaries benefit the most, looking bold and vibrant, and secondary hues are accurate and well-rendered.

Following in the footsteps of many other Scream releases, the cult gem sends chills down the spine with a great pair of lossless audio options. Fans can choose between a DTS-HD Master Audio 5.1 upmix or a 2.0 stereo track, which more die-hard traditionalists are likely to enjoy. And as seems to be the usual case, I found myself really loving the latter option over the former because it's closer to the original sound design.

The surround soundtrack isn't all that terrible and I'm sure some will be content with the results, but much of it feels flat and uniform across the entire soundstage, failing to offer clear distinction between the frequencies. Many of the effects in the rear speakers seem stretched and somewhat forced, never truly creating an enveloping soundfield, even during the few action sequences. Vocals are about the same in both tracks, but the lossless stereo mix wins hands down with a bit more clarity and fidelity in the dialogue. The mid-range is noticeably more extensive with better detailing and separation between the highs and mids, creating a broad image with good movement between the channels and a discernible sense of presence. Off-screen activity is also more believable and convincing, and the low-end is definitely more appreciable and palpable in stereo, making the clear choice for hardened fans.

Taking inspiration from horror classics, full of cheap thrills and overcharged sensationalism, Tibor Takács takes the genre back to its lurid, pulp origins in 'I, Madman'. Making the audience question reality and imagination and the sanity of the protagonist, the movie is a stylishly fun and creative chiller that should please horror hounds. The Blu-ray arrives with a strong audio and video presentation and a nice collection of supplements, making the overall package worth checking out.

Sale Price 89.99
Buy Now
3rd Party 84.95
In Stock.
See what people are saying about this story or others
See Comments in Forum
Previous Next
Pre-Orders
Tomorrow's latest releases