With new evidence and recent talks over the last few months about erratic weather patterns and clear data confirming a significant rise in sea level, it continues to astound me that people willingly remain ignorant or flat-out refuse to believe our actions as a species have an obvious impact on the health of the planet and on the over 8 million other species sharing it with us. As much as politicians and the petroleum industry would love for the public to believe, climate change and the new dangers we incessantly introduce to the natural environment IS real, a serious threat every nation around the world should take action against. Aside from the senseless bickering about pinpointing the direct cause, only talked about by the aforementioned legislators and industrialists, there isn't a controversy among scientists; there is unanimous consensus it is happening and human action is at the heart of it. We are responsible for Earth's current health crisis and the many animal species are suffering because of it.

And before I'm accused of going off tangent, jabbering on from a soapbox about things that may have nothing to do with the latest 40-minute nature documentary from the folks at IMAX, let me correct that line of thought by pointing out that it's only half true. 'Island of Lemurs: Madagascar' doesn't directly make a point to discuss issues over climate change and extinction, but it does so nonetheless in an indirect and effective manner. Like any good argument should, the film focuses on one specific area of the overall conversation, letting it serve as a crucial example of the larger debate and controversy. This is in large part what makes this production highly enjoyable and effective, spotlighting distant primate cousins exclusively inhabiting the island of Madagascar. Biologists and experts in biodiversity agree our planet appears to be on the verge of its sixth mass extinction, but the discussion and alarm here is narrowed down to concentrate on the lemur. Its home and the survival of the species is under constant threat of human encroachment and the consumption of natural resources. 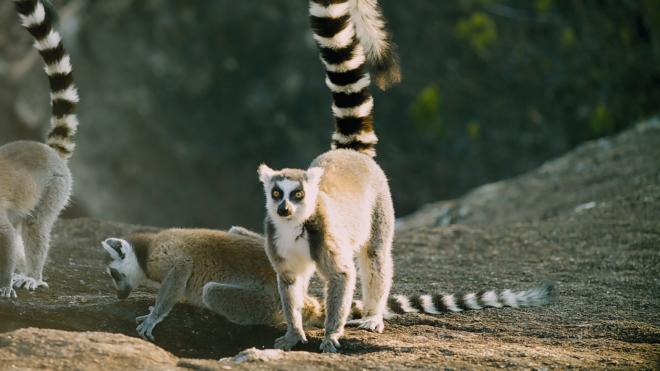 The short doc's central concern is, of course, primarily on education, teaching the audience of their uniqueness, beauty and intelligence, winning our sympathies before demonstrating human carelessness as the hazard to their existence. With soothing, reasoned narration by the incomparable Morgan Freeman, we learn of Dr. Patricia C. Wright's lifelong mission and tireless efforts to help these adorable creatures survive the modern world. One particular critter is a pair of greater bamboo lemurs, named after their favorite food and considered the largest of its class. The cute, lovable anthropoid primates are on the critically endangered list, and Wright is in a fight to repopulate the island with their sprightly, friendly personalities although she only has a father and daughter in captivity. Their forest homes are destroyed and shrunk by slash-and-burn farming, mining and logging, which in turn becomes a major contributor to our climate change crisis. Ironically, another family of greater bamboo lemurs were discovered because of a nearby forest fire.

Reuniting the same team that also brought us 'Born to Be Wild,' filmmakers David Douglas (director and cinematographer), Drew Fellman (writer and producer) and Diane Roberts (producer) also touch on the efforts of other scientists working to preserve the lives of the entire lemur population living in Madagascar. Such adorable creatures include the better known ring-tailed lemur, the incredibly cute and sociable aye-aye and the lesser understood mouse lemurs, which has the distinction of being the world's smallest known primate. Although there are approximately 100 species of lemurs, all endemic to the island country off the coast of Southeast Africa, filmmakers smartly keep the discussion on the aforementioned because they are the same critters featured in the 'Madagascar' movies. It's a great way of attracting kids to watch — though the creatures' adorableness will likely suffice in attracting attention. It's a fantastically well-made nature documentary that indirectly points to important environmental concerns without also piling on the guilt trip.

Warner Home Video brings 'Island of Lemurs: Madagascar' to 3D Blu-ray as a two-disc combo pack with a plain slipcover. The first is a Region Free, BD50 disc which contains both a 2D and 3D version of the movie, selectable when highlighting the play button while the second is a DVD-5 copy. They both come inside the standard blue keepcase and accompanied with instructions for an UltraViolet Digital Copy. After a brief promo for other 3D products available through Warner Bros, viewers are greeted by a 3D still with generic menu options and music.

The cuddly, adorable primates of Madagascar delight and charm the screen with a captivating, near-reference 1080p/MVC MPEG-4 encode. At the start, the 2D animation doesn't impress much, looking like paper cutouts, which is probably a deliberate stylistic choice, but depth remains evident. Once we switch to live-action with a raft-like object bobbing in the open ocean, the image suddenly feels immense and spacious with the sky and clouds far in the distance. On the island, whether the camera is still or moves amid the trees, separation of background information from the foreground is extraordinary with the furthest objects piercing through the screen. The faces and bodies of the cute critters show a nice roundness in their snouts and head to create a great sense of realism. Though lacking in pop-out gimmick effects, the presentation is beautiful, generating an amazing sense of three-dimensional space that's consistent.

Presented in a 1.78:1 aspect ratio, the rest of the 40-minute nature documentary displays stunning, razor-sharp details throughout. The individual hairs on the furry lemurs are distinct and incredibly well-defined, and we can make out the finest line and wrinkle in their faces and around their eyes. Each pebble on the ground and the smallest mark or scar on trees is distinctive and plainly visible. The high-def transfer comes with brilliant but comfortably bright contrast and black levels are true and accurate, adding to the presentation's already astounding amount of depth. Primaries are extravagant with vivid saturation while secondary hues are cleanly-rendered and bold, providing a great deal of energy.

With amusing music by Devo's Mark Mothersbaugh, our primate cousins are a lively, spirited bunch in this wonderfully enjoyable DTS-HD Master Audio soundtrack.

While Motherbaugh's score fills the front soundstage with quirky, upbeat tunes, exhibiting distinct separation in the orchestration and lightly bleeding into the surrounds with cheerful energy, the lemurs' duets and calls resonate throughout and spread into the rears with pleasing effectiveness. The entire soundfield comes alive with the sounds of local wildlife as birds sing their songs in the distance and trees move with the wind all around. Critters are heard jumping from one tree to the next and rustling the leaves overhead on numerous occasions, a fluid panning effect that's convincing and satisfying. Low-bass isn't impressive but adequate while dynamic range remains distinct and detailed throughout, and vocals are very well-prioritized in the center.

Though not taking direct issue with concerns on climate change and the human impact on the natural environment, 'Island of Lemurs: Madagascar' nonetheless indirectly touches on those important subjects while educating audiences on our distant primate cousins and the ever-shrinking safety of their homes. The 3D Blu-ray comes with spectacular photography and a great lossless audio presentation. Although supplements are light and honestly a bit weak, the overall package makes for a fun night for the whole family.

Sale Price 4.15
List Price 10.3
Buy Now
3rd Party 9.87
In Stock.
See what people are saying about this story or others
See Comments in Forum
Previous Next
Pre-Orders
Tomorrow's latest releases