Blu-ray: Proceed With Caution
2 Stars out of 5 Oh, Sharon, Sharon, Sharon! Just what are you thinkin' these days? After years of toiling in the trenches of B-movie oblivion and over a decade since your breakout performance in 'Basic Instinct,' you've amassed a perfectly respectable, often impressive resume. You've worked with some of Hollywood's biggest A-list directors, appeared in numerous hits and even silenced the critics with your bravura, Oscar-nominated turn in Martin Scorsese's 'Casino.' Sure, you've found yourself in plenty of clunkers, too, but even if you never work again you will forever be known to the history books as a true movie star. Honey, you really don't have anything left to prove.

So, dear Sharon, as a genuine fan, I have to ask -- why did you even bother with 'Basic Instinct 2?' Are your credit card bills really that bad? Do you love your new fake breasts so much that you just had to show them off to the world again (and again, and again)? Or did you simply have nothing better to do than collect that free trip to London and shoot a movie in between spa visits? Sincerely -- I ask this not to be cynical, or to mock, but only out of genuine curiosity. I've always believed our greatest screen sirens eventually become true icons by resisting the temptation to repeat past triumphs, instead growing old gracefully by transitioning into parts that better befit their ages. Look at Jane Fonda, Annette Benning, Kathleen Turner -- that should be you, Sharon. Instead, with 'Basic Instinct 2,' you're coming dangerously close to becoming Hollywood's big-screen answer to Shannon Tweed.

Coming 14 years after its blockbuster predecessor, 'Basic Instinct 2' (one-time subtitle "Risk Addiction" now dropped, as if that would make it any classier) is a film almost completely misguided and misconceived in every respect. As a sequel, it comes so far past the sell-by date that mainstream audiences could care less about the further adventures of seductress Catherine Tramell (Stone). As a steamy, erotic thriller, it boasts far less graphic and shocking sex than anything you can see for free on Showtime After Dark. And even as a piece of high camp, it fails miserably, as ludicrous and unbelievable as the first 'Basic Instinct' but not even half as much fun.

Which is a shame, because Sharon Stone is the only person involved in 'Basic Instinct 2' that seems to realize that the film, though technically a sequel, is really a remake of the first. Only this time Trammel has been transplanted to England, and with a wise Michael Douglas nowhere to be seen, she's left to sink her manipulative claws into schlumpy British psychoanalyst Dr. Michael Glass (David Morrissey). After the hilarious set-up (Trammel jacks off a famous sports figure as he drives his car off the side of a bridge to his death, giving new meaning to the term "auto-erotica"), she's put under Glass' care as she awaits to stand trial. What follows is basically a recreation of 'Instinct,' even down to specific scenes and plot twists. Trammel again proves she is not only a master manipulator but has read the script in advance, anticipating the next moves of every character as she goes about systematically destroying Glass and murdering a half dozen people with only a double entendre as a murder weapon.

Yes, Trammel/Stone is still a grand bitch of the cinema (bless her soul), but sadly she's the only one getting off. Everything else in 'Basic Instinct 2' is so pretentious, sullen and infatuated with its own self-imagined shockingness that it forgets to be trashy. Say what you want about the first 'Basic Instinct,' or its director Paul Verhoeven's shameless misogyny, but at least it was completely and continuously entertaining. Nothing more than high-gloss, big budget exploitation smut, 'Basic Instinct' was lurid and ludicrous, and more fun than a barrelful of buttered popcorn. 'Basic Instinct 2' is only bizarre, treating the first film like some hallowed cinematic masterpiece whose original script is some sort of template to be worshipped. Aside from Stone, vamping it up as if she's having the time of her life spreading her legs, I've never seen so many people having so little fun getting screwed.

Presented in 2.40:1 widescreen and encoded at 1080p, 'Basic Instinct 2' is one of the better-looking transfers I've yet seen on Blu-ray. Of course, it is also a brand-new film, so I wouldn't expect anything less than a terrific image. Luckily, for the most part, this one doesn't disappoint.

As expected for a recent release, the source material is in excellent shape. 'Basic Instinct 2' is a glossy, polished production, and some post-production trickery has been employed to give the image extra oomph. Most noticeable is the slightly pumped up contrast, which gives the transfer a more harsh, edgy look with blown out whites. However, it also detracts a bit from overall detail. Of course, this is the intended visual look of the film, but it does keep the transfer from being a bit less three-dimensional than the best Blu-ray and HD DVD have to offer. Colors are also nice and solid, if somewhat desaturated -- the film uses steel blues and greens effectively, with the odd splash of red or orange for pop. Overall the film feels almost monochromatic, which is interesting and nicely rendered here. Granted, some may complain the film doesn't look as vivid as other recent films, but it does give 'Basic Instinct 2' a professional look, and the movie's cinematography is certainly the classiest part of the whole enterprise.

When assessing the transfer of any Blu-ray or HD DVD disc title, we here at High Def Digest always compare the HDMI versus component output on every disc to detect any depreciable differences in image quality, as well as to confirm whether or not the Image Constraint Token (ICT) has been activated on a particular disc title or not (which would down-convert the component output's resolution to standard DVD quality).

The audio quality of 'Basic Instinct 2' is also good, though the film's sound design isn't as aggressive as I had hoped. Presented in uncompressed PCM 5.1 surround like all of Sony's Blu-ray releases, overall dynamic range and fidelity is excellent, but the mix is lacking in terms of a consistent level of envelopment. I liked how smooth and warm the score sounds (however derivative it is of the original film), especially the spacious midrange and very clean and clear highs. Low-end, though never incredibly forceful, is tight and again delivers most impressively with the score. Unfortunately, surround use is sporadic, and often in odd ways. The action/chase scenes boast some nice bleed of the score to the rears, and noticeable directional effects, yet other intense moments are too front heavy. Conversely, subtle atmospheric effects are well done, such as in the early therapy scenes between Catherine Trammel and her shrink, yet later some scenes that should have been more lively instead fall flat. Still, all told this is a perfectly fine soundtrack if a bit inconsistent.

Alas, Sony has decided to only present 'Basic Instinct 2' in its R-rated theatrical version, even though the studio is also releasing the film in an unrated form on standard DVD. Granted, the extra steamy footage only adds up to a little more than two minutes, but a weak film like this needs all the smut it can get. Also missing on this Blu-ray edition is some even more steamy bonus unrated footage, as well as ten additional deleted scenes. 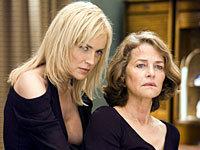 The extras we do get include a pretty useless 11-minute "Between the Sheets: A Look Inside Basic Instinct 2" featurette which is your typical fluff piece in which the cast and filmmakers tell us how great the movie is going to be.(oops!), and an audio commentary with director Michael Canton-Jones. Now, I think Canton-Jones is a good filmmaker and enjoyed many of his other movies (particularly 'Scandal' and 'This Boy's Life'), but here he seems a bit unaware of the deficiencies of 'Basic Instinct 2.' Granted, the film was probably a lot more fun to make than to watch, but I continue to remain surprised at how many major directors seem completely clueless that they've made a stinker (the gushing Frank Oz commentary for 'The Stepford Wives' remake also comes to mind). Still, Canton-Jones is a smart, personable guy and imparts a good deal of production info which is genuinely interesting. But you're really going to have to be a diehard 'Basic Instinct' or Sharon Stone fan to get all the way through this one.

Rounding out the extras are some previews for other Sony titles, though no actual theatrical trailer for 'Basic Instinct 2.'

It is hard to imagine who the audience for 'Basic Instinct 2' was supposed to be. Coming so long after its predecessor, mainstream audiences could only yawn, and anyone looking for high-gloss smut can just go rent a porno instead. So what we are left with is a star looking for a comeback vehicle and finding only a broken-down jalopy with nothing under the hood. As a Blu-ray release, 'Basic Instinct 2' looks and sounds very nice, and boasts a decent filmmaker's commentary. Unfortunately, Sony has inexplicably included only the R-rated cut here and not the uncensored version, which makes it almost besides the point. Had they given us all the full frontal Catherine Tramell fans really want in a 'Basic Instinct' flick, this would have been easier to recommend.