Empire of the Ants / Jaws of Satan

Gigantic mutant ants ruin a beach-front property excursion in 'Empire of the Ants' from Bert I. Gordon, celebrated B-movie maestro of such sci-fi horror favorites as 'Village of the Giants' and 'The Amazing Colossal Man.' Using some creative trick photography, editing, various miniatures and rear projection, Gordon lavishes the screen with footage of the six-legged freaks running wild on a seemingly deserted island. By today's standards, the special effects are more quaint and whimsical than frightening, more likely to produce laughter than wince in terror. Nonetheless, the antiquated visuals remain a genuine delight, sure to please the most imaginative in the audience, those appreciating the work and effort it took for accomplishing the end result. Though not one of the better known creature-features touching on the "nature run amok" theme, affectionately called natural horror, but it adheres to the formula effectively, serving as a great model during the short period when the subgenre was popular.

Only in the cinematic universe of cheap, straight to the point low-budget productions do people foolishly dump barrels of toxic waste into the ocean, not far from land, without considering that it might actually wash ashore at some point. Yet, this is precisely how the movie opens, showing one such container rotting on the beach unnoticed while a swarm of ants appear to delight in the mercury-like liquid. Apparently, the radioactive matter is of such potency that the insects rapidly grow into monstrosities of various sizes. Of course, in the third act, we discover otherwise, but until then, viewers are lead to believe it all happened relatively quickly. Some have even grown patches of hair on their exoskeleton bodies — a possible hint the mutations will eventually evolve to other hideous malformations? Thoughts of a possible sequel run rampant as the twelve passengers who originally set sail for a friendly three-hour tour of free booze shriek, race and scramble for their lives, only to become hilarious fodder for the ants. 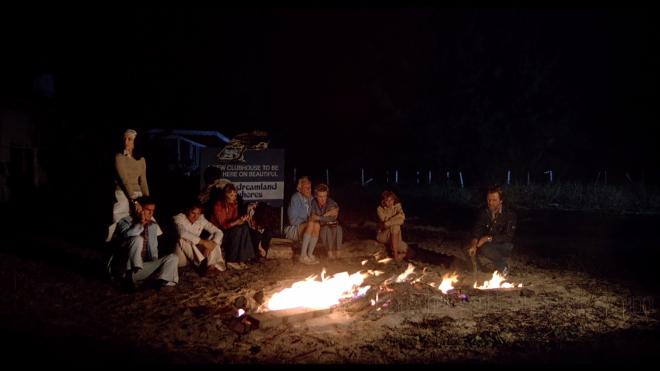 Very loosely based on the H.G. Wells short story of the same name — truth be told, it has zero relation outside the concept and title — the script, which Gordon co-wrote with television scribe Jack Turley, takes a more environmental concern stance than its source. But whatever political misgivings may be present are soon lost when the cast of characters slowly reveal themselves to be some unpleasant folks. Noteworthy is the real-estate agent Marilyn Fryser (Joan Collins), a shady, domineering and ungrateful business woman, and the churlish, neglectful husband Larry Graham (Robert Pine of 'CHiPs' fame), a total jerk who later abandons his wife to save his own skin. The rest take advantage of the free meal and boat ride, including the old couple who evidently make it a habit. Interestingly, our introduction to the group cleverly makes room for the ship's skipper (Robert Lansing) and down on his luck Joe Morrison (John David Carson) to demonstrate their heroics, especially when the second half surprises with a bizarrely, wickedly dark twist. (Movie Rating: 3/5)

Throw natural horror and the supernatural with a heavy dose of melodrama into the blender and the results are 'Jaws of Satan,' a prosaic concoction that's as bitter to the taste and hard to swallow as one would expect. Producer and director of many favorite, now classic television sitcoms Bob Claver made the giant leap to the big screen with this misguided and disastrously dull low-budget creature-feature. Despite his history and experience, his camerawork is far too mechanical for building any sense of suspense with several amateurish segments — not including the comically-bad special effects — that ultimately ruin the many attempts at seriousness. Writers James Callaway and Gerry Holland also made their debut with this tale about a sleepy town under attack by an infestation of rattlesnakes. But an admittedly intriguing concept mingled with the occult and religious themes ultimately falls flat when other aspects such as local politics, corruption and a crisis of faith are introduced. 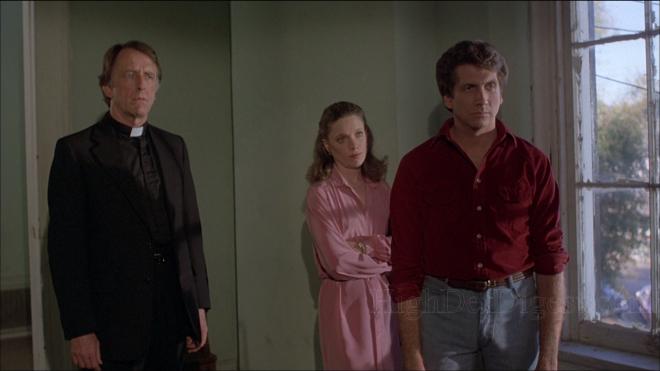 The poisonous venom of silliness and boredom is almost immediately injected from the start when a pair of male chauvinist carnies are slayed by a snake in a box. But, as is made apparent right away, the scaly serpent is far from ordinary, a limbless slithering creature with mind-control powers and the ability to also possess others of its ilk, making it the center of the infestation. To Claver's credit, however, these opening moments, as preposterous as the idea may be, are impressively effective, only showing stock footage of a real king cobra when necessary — a clever technique the TV director carries throughout the rest of the movie. Other snake attacks are left to the imagination while the cobra's influential presence is implied through amusing Hitchcockian shadows. Much of this is soon forgotten when several scenes of puppets are evidently employed, especially in the final showdown, or when characters freeze in lieu of running, such as the terrified town doctor sitting motionless on her bed.

Also known as 'King Cobra,' the toxic venom of the opening act quickly spreads and delivers a more fatal bite when a subplot of a battle of wits between various characters forcefully injects itself into the storyline. Implying a similar theme as the above movie, a concerned Dr. Maggie Sheridan (Gretchen Corbett) is a headstrong woman continuously met with resistance by grumpy old farts, especially wealthy land developer Matt Perry (Bob Hannah), who has a personal investment of not seeing locals go into paranoid hysterics. (Perceptive moviegoers will note Hannah plays doting father to a very young Christina Applegate, just a few years shy of her 'Married … With Children' fame.) Snake experiment Dr. Paul Hendricks (Jon Korkes) aiding in Sheridan's investigation makes matters worse, and his talents are funnily put to little use when a crucifix proves more effective. Speaking of which, things turn more comical when Father Tom Farrow's (Fritz Weaver) crisis of faith is revealed as the reason behind the infestation, yet his importance goes unexplained, making for a rather disappointing finish. (Movie Rating: 2/5)

Shout! Factory brings 'Empire of the Ants/Jaws of Satan' to Blu-ray as a double-feature single-disc release under the distributor's Scream Factory line. The Region A locked, BD50 disc containing both films is housed inside a regular blue case. At startup, the disc goes to an animated screen with music where viewers can choose between the two movies, and then taken to the standard menu screen with full-motion clips.

The giant ants run amok on Blu-ray with a great-looking 1080p/AVC MPEG-4 encode (1.85:1), showing that the elements used are in excellent condition. Despite showing its age in a few soft spots and a couple less than satisfying instances of poor resolution, most of which is related to the trick photography and not a fault of the encode, the video is detailed with sharp, fine lines in the foliage and clothing. Skin tones are healthy and revealing thanks to a well-saturated and boldly rendered color palette that makes the movie younger than it actually is. Contrast and brightness are very well-balanced with outstanding clarity and visibility in the distance while blacks appear deep and true. Overall, it's a great high-def transfer. (Video Rating: 3.5/5)

The possessed snakes deliver a venomous bite with a shockingly good AVC-encoded transfer that shows excellent detailing in the leaves of trees and the individual blades of grass. Every wrinkle and stitch in the costumes is plainly visible and distinct while facial complexions appear natural and revealing. As would be expected, however, the source occasionally shows its age with a couple poorly resolved moments and a few white specks here and there. Thankfully, they don't distract or ruin the presentation. On the positive side, colors are vivid and energetic, contrast is comfortably bright with crisp whites, and black levels are accurate, providing the 1.85:1 image with excellent dimension. (Video Rating: 3.5/5)

The creature-feature also causes a whole heap of trouble with a great DTS-HD Master Audio mono soundtrack. Admittedly, several of the high-pitched screams and the ants' ear-piercing screeches tend to come off a tad bright with mild, negligible distortion, but overall, dynamic range is distinct with strong clarity in the higher frequencies. Although restricted to the center, the lossless mix comes with an excellent sense of presence that often feels broad. Vocals can sometimes be a bit difficult to make out clearly, but for the most part, dialogue is generally understood and easy to follow. There isn't any bass to speak of, which can be somewhat disappointing but doesn't take away from the movie's enjoyment. (Audio Rating: 3/5)

King Cobra strikes again with a generally pleasing DTS-HD MA mono track that doesn't offer anything truly noteworthy but gets the job done with little complaint. The issue comes from a somewhat limited mid-range, making the action sequences come off too bright and piercingly loud, distorting several of the higher frequencies. That bit of criticism is more than likely due to the production and age of the source, but it's there nonetheless and can be a tad distracting. Otherwise, imaging feels accurate and wide with a satisfying sense of presence. Some mild hissing in the vocals takes away from a couple scenes, but dialogue reproduction, for the most part, is consistent and intelligible. Although bass is noticeably missing, the lossless mix is none too terrible and remains fairly strong. (Audio Rating: 3/5)

Thanks to some creative trick photography, editing, various miniatures and rear projection, gigantic mutant ants ruin a beach-front property excursion in 'Empire of the Ants' from celebrated B-movie maestro Bert I. Gordon. Producer and director of many now classic television sitcoms Bob Claver made feature-length debut in 'Jaws of Satan,' a prosaic concoction of natural horror and the supernatural with a heavy dose of melodrama. The Blu-ray arrives with great picture quality of both films, but the audio is not quite as impressive. Although missing some worthwhile supplements, fans of bad low-budget creature-features with will be pleased with the package.

Sale Price 99.99
Buy Now
3rd Party 58
In Stock.
See what people are saying about this story or others
See Comments in Forum
Previous Next
Pre-Orders
Tomorrow's latest releases