Like the special-effects sequence where a 200-year-old corpse slowly regains its flesh, traditional Hollywood horror imagery merges with the visual creativity of modern filmmakers in Mario Bava's 'Black Sunday.' Released during the early period of what's commonly considered the golden era of Italian gothic horror, Bava's first solo directorial effort was a particularly gruesome and graphic motion picture for the time, and it stirred quite the controversy. Nevertheless, the director, who had been working as a cinematographer for over two decades prior, immerses his audience in a hauntingly exquisite Baroque atmosphere that's as beautifully hypnotic and romantic as it is overtly spooky and eerily fantastical.

Permeating the screen with rolling fogs through dilapidated cemeteries and the cobweb-infested cathedral ruins of ancient castles, Bava unabashedly takes inspiration from Hollywood classics, such as Browning's 'Dracula' and Whale's 'The Bride of Frankenstein.' Pushing in and out, slowly moving side to side, dolly shots quickly become a notable favorite within the film. Bava makes several long takes using this technique to stunning effectiveness, lingering in one area for long periods of time, allowing the frame to appreciate the magnificent set design of Giorgio Giovannini. He's paying homage to those benchmark models while also desiring to humbly surpass them with his own expressive style.

And a graceful and masterful one it is. Working from a screenplay by Ennio de Concini and Mario Serandrei, the director blurs the line between fact and fiction, science and myth. The one night they try to rest before continuing on their trip to a medical conference, Dr. Thomas Kruvajan (Andrea Checchi) and Dr. Andre Gorobec (John Richardson) are confronted by the unexplainable supernatural happenings of a small Moldavian village. Believing a two-hundred-year-old curse from a witch nothing more than a fairytale, it's not long until Kruvajan falls under her vampiric spell and Gorobec is left to fight her alone. Bava, again, shows this struggle in elaborately mesmerizing sequences that are surprisingly spine-chilling while also genuinely captivating and evocative. 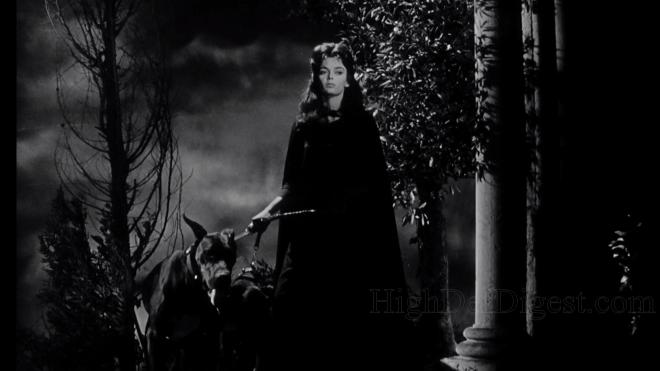 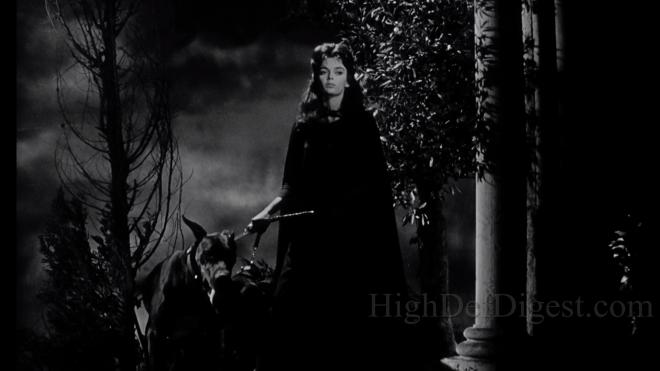 Loosely inspired by a short story from Russian realist Nikolai Gogol, the film also uses two typical staples of the gothic genre: family curses and romance. Amid this battle to stop the resurrection of the witch Asa Vajda (Barbara Steele in her breakthrough role), Gorobec falls hopelessly (and overdramatically) in love with the beautiful Princess Katia (Steele). In having her be a descendent of the witch, the plot falls victim to a few clichéd moments and becomes quite the predictable melodrama. Yet, Bava's elaborate and sometimes gory visuals keep the whole affair steady and wonderfully entertaining. After all these years, this gorgeous atmospheric gem still manages to amaze and delight.

Besides, the opening sequence is usually more than enough to shock viewers into watching further, wanting to see where Bava could take it next. It's a memorable, ghastly scene showing Asa sentenced to die by her own brother and a black-hooded executioner hammers a metallic mask with spikes in the inside onto her face, thereby imprecating the family lineage. In fact, the film's original title, 'The Mask of Satan,' is derived from this particular scene. Showcasing a wealth of stylistic and energetic camera angles with hauntingly Baroque atmospherics, 'Black Sunday' is Bava at his finest, and the film is a true classic of Italian gothic horror which astonishes with a mix of evocative visuals and gore.

Kino Classics reissues Mario Bava's 'Black Sunday' on a Region A locked, BD25 disc inside a standard blue keepcase. At startup, viewers are taken straight to a static menu with a still photo of the cover art. 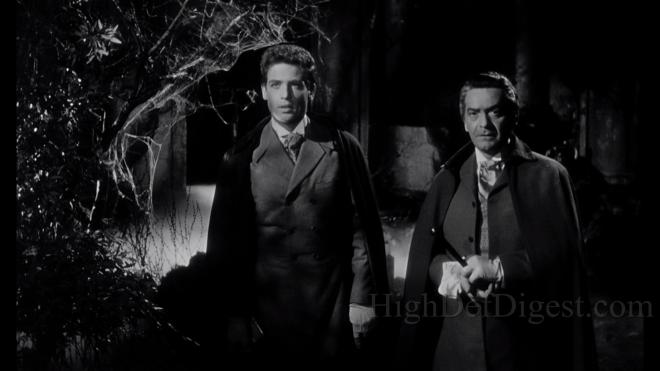 Despite the claim that this reissue was mastered from the original 35mm elements, the Mario Bava horror favorite doesn't look all that much different than its 2012 counterpart, comparatively speaking. On the other hand, this 1080p/AVC MPEG-4 encode does offer slightly better definition and resolution but remains the same clean, great-looking transfer as before.

Presented in its original 1.66:1 aspect ratio, the black-and-white image shows lots of sharp details in the costumes and architecture of the old village. Despite many beautifully photographed scenes of rolling fogs and mist, we can clearly make out the fine lines in and around various objects. There are several moments of softness and blurriness; however, they likely stem from the original cinematography. Black levels are rich and penetrating with excellent gradations between the darker and lighter portions of the image. Contrast is generally crisp and well-balanced, but highlights tend to appear hotter than normal, which can take away some from the finer details. White specks and dirt also pop-up sporadically, which means little effort was made to restore the film to its former glory, yet it's the best it has ever looked. 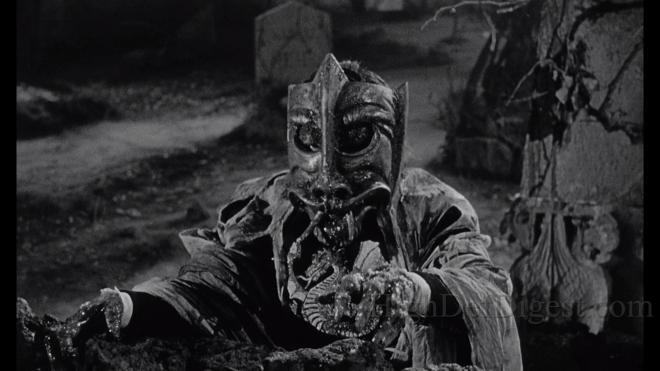 Although the video may not have benefitted much from the remaster, the classic of Italian gothic horror shows improvement in the audio department compared to its predecessor. The atmospheric supernatural flick comes with a new and slightly stronger DTS-HD MA mono soundtrack.

There remains noticeable clipping and distortion in the upper ranges, but the musical score and overall imaging offers a better sense of presence and spaciousness, in spite of the lossless mix feeling largely constrained in the center. For the most part, dynamic range still seems limited and uniform with small pops and light hissing in the background, but separation and clarity between the frequencies is much improved with good distinction in the acoustical details. Ignoring the obvious, sometimes distracting ADR work, dialogue reproduction is clean, intelligible, making this new high-rez track a better listen than before. 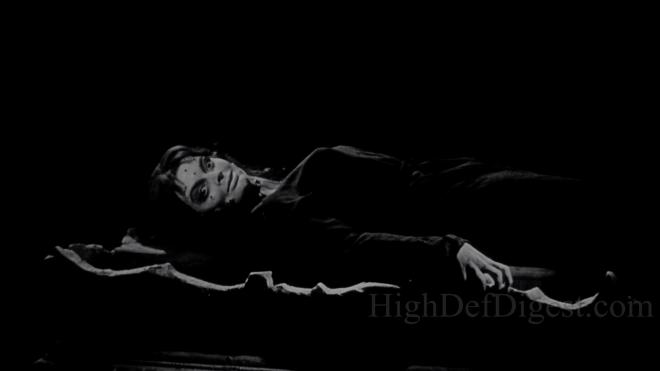 Aside from a trailer, this rerelease is a bare-boned package. 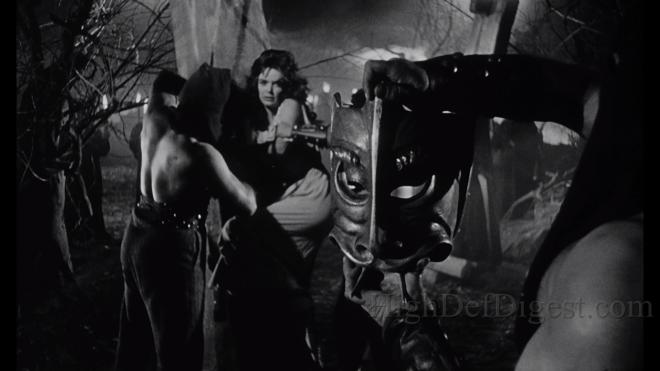 Mario Bava made his first solo directorial effort with 'Black Sunday,' a macabre supernatural fable about witches, family curses and overcoming the forces of evil. Demonstrating his visual skills and creative genius, the film is the quintessential Bava and a true classic of Italian gothic horror. The newest reissue arrives with a similar picture quality but a slightly improved audio presentation. With a lack of bonus material, the overall package is worth a look for the curious and a good buy for loyal fans.

Sale Price 29.31
Buy Now
3rd Party 27.6
In stock. Usually ships within 3 to 4 days.
See what people are saying about this story or others
See Comments in Forum
Previous Next
Pre-Orders
Tomorrow's latest releases