Alice Howland, happily married with three grown children, is a renowned linguistics professor who starts to forget words. When she receives a devastating diagnosis, Alice and her family find their bonds tested.

Ask anyone what their most precious possession might be, and many might answer their memory. That stockpile of experiences and sensations in our brain enriches our existence and forms a patchwork fabric that ultimately defines who we are. Without memory, we're a perennial blank page, an empty shell, a void that needs to be filled. Alzheimer's Disease robs us of that essential core, disconnecting us from rich, satisfying lives and isolating us into a cocoon where we retreat inward and lose our sense of self. 'Still Alice' takes a probing look at this private hell by putting a face on Alzheimer's Disease, but it's not the wrinkled, aged, careworn face we expect. On the contrary, this visage is vibrant, smooth, beautiful, and most importantly, young. Early onset Alzheimer's hadn't received much publicity before 'Still Alice,' but Richard Glatzer and Wash Westmoreland's adaptation of Lisa Genova's novel shines a beacon on the frightening affliction that seems to be affecting more and more people in their prime every year.

Intimate, informative, and - like the disease - somewhat distant, 'Still Alice' chronicles the rapid decline of 50-year-old linguistics professor Alice Howland (Julianne Moore), whose seemingly innocuous forgetfulness becomes ever more disturbing and begins to severely disrupt her ordered and idyllic life. After she receives her devastating diagnosis, we witness how the disease begins to slowly chip away at her self-esteem, alter her outlook, sap her energy, and transform her familial relationships. (At a particularly low moment, she ruefully states, "I wish I had cancer.") Her devoted husband John (Alec Baldwin) copes well at first, but caring for Alice soon becomes a full-time job, and he enlists the aid of their youngest daughter Lydia (Kristen Stewart), an aspiring actress, to help look after her. As Alice's disease evolves, so too does her relationship with Lydia, but like grains of sand slipping through an hourglass, Alice's lucid moments become ever fewer and her grip on herself becomes more tenuous.

Julianne Moore has won every award imaginable, including the Best Actress Oscar, for her terrific portrayal, and she single-handedly puts this film on the map. With sensitivity, grace, and just the right emotional pitch, Moore crafts a realistic performance, beautifully expressing the harrowing fear, disbelief, confusion, and despair that define Alzheimer's. Unlike other actresses who might feel the need to overplay the emotional scenes, Moore is wonderfully natural, and her openness draws us into the movie. Her relaxed rapport with Baldwin makes their on-screen marriage believable, but unfortunately her scenes with the sullen Stewart never quite ring true. Kate Bosworth and Hunter Parrish come off far better as Alice's other children, despite their limited screen time.

Though 'Still Alice' can be emotionally affecting at times, it's too preciously constructed and agenda driven to exert much visceral power. There's no real plot to capture our imagination, and since the narrative's time structure is rather vague, Alice's deterioration seems incredibly swift, even by cinematic standards. Glatzer and Westmoreland are competent directors, but the film lacks style, and its straightforward, workmanlike presentation calls to mind too many disease-of-the-week TV movies that flooded the airwaves back in the 1980s and 1990s. (One of them, 'Do You Remember Love?', starring Joanne Woodward, also dealt with early onset Alzheimer's in much the same manner as 'Still Alice.') At times, it seems like the pair is trying to cram too many symptoms and typical Alzheimer's episodes into the picture, as if they were filming a public service announcement instead of a character portrait.

I have a personal connection with Alzheimer's Disease (these days, who doesn't?), so I was especially anxious to see 'Still Alice' and relate it to my experience. I expected to be both enlightened and devastated, but strangely I was neither. While I recognize the film's importance and value, and appreciate Moore's bravura performance, I can't help but feel the movie played it too safe. Instead of going deep inside these characters, the screenplay merely scratches the surface, just as it scratches the surface of the disease it depicts. Where's the frustration of family members whose patience has worn thin? Where are the mood swings and outbursts that Alzheimer's patients regularly experience? What about financial irresponsibility and lack of personal hygiene? Alzheimer's isn't pretty, and 'Still Alice,' for all its admirable perception, ultimately presents a rather glossy view of the illness. Though it's a good film, it could have been a great one had it more fully embraced the underbelly of its topic.

As time passes, I believe Alice will continue to be regarded as a career-defining role for Moore, but the film, like so many disease-related productions, will soon lose its topicality and, consequently, its luster. 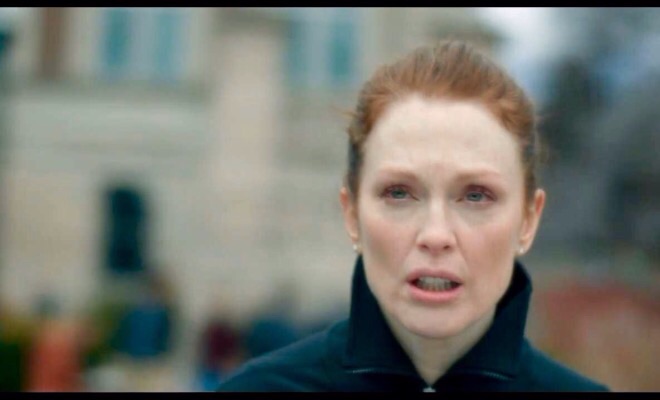 'Still Alice' arrives on Blu-ray packaged in a standard case inside a slip-on sleeve. A leaflet describing how to access the Digital HD with Ultraviolet copy is tucked inside the front cover. Video codec is 1080p/AVC MPEG-4 and default audio is DTS-HD Master Audio 5.1. Once the disc is inserted into the player, previews for 'Whiplash,' 'Foxcatcher,' 'Mr. Turner,' 'Leviathan,' 'Red Army,' and 'Wild Tales' precede the static menu with music.

Clear and vibrant, yet with a distinct natural appearance, 'Still Alice' looks quite good on Blu-ray. The 1080p/AVC MPEG-4 transfer from Sony is distinguished by excellent contrast, almost no film grain, and a warm color palette. No specks, marks, or scratches dot the pristine source material, and strong black levels, life-like flesh tones, and detailed close-ups heighten the intimate nature of the material. Background elements are easy to discern and a palpable sense of depth enhances the effectiveness of location scenes. A few shots err on the dull side, but the overall image is solid and free of any digital issues, such as banding, pixelation, or noise. 'Still Alice' is a straightforward, no-nonsense film, and its transfer totally reflects and respects that perspective.

There's not much aural flash on display in 'Still Alice,' but the DTS-HD Master Audio 5.1 track supplies clear, well-modulated sound that serves this intimate drama well. Surround effects are faint, but a few atmospheric bleeds lend a bit of expansion to this somewhat constricted track. Dialogue is always well prioritized and easy to comprehend, and the simple, understated music score by Ilan Eshkeri flaunts a surprising amount of presence and tonal depth. A wide enough dynamic scale handles all the highs and lows without even a hint of distortion, and no hiss, pops, or crackles intrude. All in all, this track is pretty basic, but that's all it needs to be.

The bulk of the extras are high-def exclusives (see below), but a couple of supplements are shared between the Blu-ray and DVD releases.

A luminous performance by Julianne Moore that’s both incisive and heartbreaking distinguishes ‘Still Alice,’ but this rather clinical look at early onset Alzheimer’s Disease can’t muster a strong enough narrative to set it apart from other movies dealing with debilitating conditions. If raising awareness is its raison d’être, then ‘Still Alice’ is an unqualified success, but as a drama it lacks bite. Sony’s Blu-ray presentation features good quality video and audio transfers, as well as several supplements, a few of which are exclusive to this release. Though the film might not live up to expectations, Moore’s portrayal certainly does. Her sensitive and intuitive work was justly rewarded on Oscar night, and it sheds essential light on a growing affliction that needs a larger forum. ‘Still Alice’ just misses earning a recommendation, but it's definitely worth a look.

Sale Price 9.99
List Price 19.99
Buy Now
3rd Party 2.47
In Stock.
See what people are saying about this story or others
See Comments in Forum
Previous Next
Pre-Orders
Tomorrow's latest releases