The Man with the Iron Fists 2

On the hunt for a fabled treasure of gold, a band of warriors, assassins, and a rogue British soldier descend upon a village in feudal China, where a humble blacksmith (RZA) looks to defend himself and his fellow villagers.

For those expecting or hoping  for a fully developed story based on the bizarrely dressed bird clan from the end credits sequence of the first movie will be sorely disappointed with 'The Man with the Iron Fists 2.' It was an off-the-wall, zany conclusion to an otherwise diverting love-letter to classic martial-arts films. RZA demonstrated his adoration for exploitation cinema and kung-fu actioners in particular with feverish verve and hyperbolic enthusiasm, book-ending the magnified blood-spray mayhem with one final jab at the imaginative zeal of the wuxia style of filmmaking. To some small extent, I anticipated the Wu-Tang Clan founder to pick up where that wild idea left off, if not at least follow-up the first movie with the same level of gusto and kinetic energy, in spite of its relatively small faults. Instead, RZA passes the reins over to Dutch filmmaker Roel Reiné, whose only notable credits include direct-to-video sequels for 'Death Race,' 'Scorpion King' and the dead on arrival awful 'Dead in Tombstone.'

While other expectations fail to satisfy, Reiné's approach to the material surely lives up to presumptions. The common thread between the aforementioned flicks is an abundance of banality and mind-numbing boredom in light of wild, over-the-top action. Mark the sheer mundaneness and lack of engaging interest of this follow-up under his belt, demonstrating he has a talent for turning a well-choreographed fight scene into a sleep-aid. In the final battle sequence between the plot's hero The Blacksmith and a certain someone who will remain nameless for the sake of spoilers, the actors glide through the air, swinging swords, kicks and fists while hollering at the top of their lungs yet seem incredibly bored. And what should be a laugh-out-loud moment because the harnesses pulling the men into the air are plainly visible have little effect after nearly 75-minutes of absurd camera movements, extreme close-ups done in post-production editing and endless debating on pacifism versus fighting. 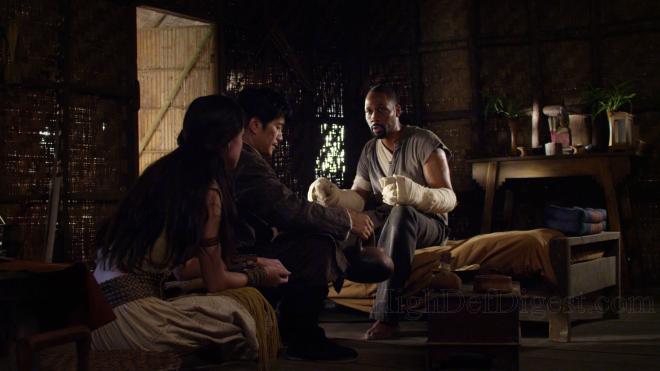 The only connection this movie makes to its predecessor is during a very brief confrontation at the start between RZA and Silver's brother, who, of course, is seeking revenge. The fight leaves Blacksmith unconscious and floating downstream until he is found in a small town coincidentally near where he wanted to be in the first place. From a script RZA co-wrote with John Jarrell, the protagonist is soon transformed into the proverbial Moses, a man wanting to live in peace but ultimately pressured to help villagers free themselves of a violent, slave-driving clan forcing them to mine a nearby mountain. The theme is far from subtle and also does nothing to make the film any more interesting, except perhaps to see Cary-Hiroyuki Tagawa's angry, snarling stares at the rest of the cast. His glaring eyes from a wooden wheelchair is about as close as we come to comedy, and that's guessing the filmmakers were attempting to even be funny during certain moments. Otherwise, audiences will watch with the same angry, snarling stares for wasting 90 minutes of their lives.

If there is one bit of surprise in 'The Man with the Iron Fists 2,' it is seeing Dustin Nguyen, better known as Sergeant H.T. Ioki of the '21 Jump Street' television series, starring alongside RZA. As Li Kung, the unofficial leader of the villagers looking out to protect his family, his presence brings some much-needed gravitas after the death of his brother and his backstory makes the movie somewhat bearable. Then again, his rise to liberator is predictable fare and overcomes his aggressors with surprisingly little challenge, making everything else before it almost frustratingly pointless since he apparently could have taken out the entire clan single-handedly. Wouldn't witnessing the abuse, exploitation and murder of his people for years then make him an accomplice rather than a hero? But such logic is ignored in favor of Kung Fu action that, unfortunately, is sometimes indecipherable thanks to Reiné's annoying camerawork, who also served as discount cinematographer. Perhaps, RZA should have taken those iron fists of his, pummeled this story beyond recognition and let it be forgotten.

Universal Studios Home Entertainment brings 'The Man with the Iron Fists 2' to Blu-ray as a two-disc combo pack with an UltraViolet Digital Copy code. A DVD-9 copy sits comfortably opposite a Region Free, BD50 disc. Both are housed inside a blue, eco-elite case with a lightly embossed and glossy slipcover. The unrated version, which only runs 1 minute longer, is also made available and shows a couple extra frames of blood and graphic action. At startup, viewers can skip through a few internet-based trailers and arrive at Universal's standard menu selection while full-motion clips and music play in the background.

The sequel to the decently fun martial arts love-letter from 2012 debuts on Blu-ray with a mostly satisfying but far from perfect 1080p/AVC MPEG-4 encode. It's apparent the movie was shot on HD cameras, showing many of the same tall tell signs of a much too clean, sterilized photography that lacks a distinctive style. Then again, Roel Reiné's cinematography is pretty plain and average to begin with, like a made-for-television movie concerned more with budget than creativity.

Details from a certain distance are razor-sharp with plenty of visible definition in the wooden structure, costumes and surrounding foliage. Facial complexions are revealing with lifelike textures, but there are several noticeably soft moments, especially during the extreme zoom close-ups which were oddly done in post-production during the editing. Contrast tends to run hot but remains comfortably bright without ruining the rest of the 1.78:1 image. Blacks are, for the most part, accurate and occasionally penetrating, but brightness levels are not consistent with shadows sometimes looking a bit faded and murky. The palette is richly saturated with bold primaries, providing lots of energy, but it's not enough to really impress, giving fans an overall nice presentation.

Compared to its predecessor, these iron fists sadly lack the same seismic, room-shaking punch, which is not to say the overall quality of the DTS-HD Master Audio soundtrack is bad or noticeably disappointing. In fact, its most impressive aspect is the imaging, delivering clean distinction between the mids and highs, coming in loud and sharply clear when action erupts on the screen. The soundstage feels spacious from beginning to end, engaging the viewer in effective off-screen activity and excellently balanced channel separation. The dialogue is clean and precise in the center, never drowned out by the movie's loudest, craziest moments.

Sadly, none of the positives seem to extend to the rears, making this a very front-heavy presentation. Occasionally, a few discrete effects bleed into the surrounds, but they fail to generate any sense of immersion or a satisfying soundfield. Somewhat disappointing is the fairly strong yet only serviceable low-end, especially after the shockingly good ultra-low depths the first movie reached (Bass chart). Bass exists, to be sure, providing hearty, palpable weight to the action, but it's nowhere near as earth-shattering and wall-rattling as part one, making the lossless mix passable but also forgettable.

Lacking the same off-the-wall zaniness and enthusiasm of the first movie, 'The Man with the Iron Fists 2' arrives with a rather mediocre follow-up on the hero's Moses-like adventure. Continuing its love for classic Kung Fu action films, RZA returns to the role but looks just as bored as the movie actually feels. The Blu-ray arrives with very good video and a strong audio presentation, but the small collection of supplements make the overall package barely worth a rental, and only fans of the first film are likely to give it a watch out of curiosity.

Sale Price 8.97
List Price 9.98
Buy Now
3rd Party 4.98
In Stock.
See what people are saying about this story or others
See Comments in Forum
Previous Next
Pre-Orders
Tomorrow's latest releases