Nowadays, when people think of Fanny Brice, they invariably envision Barbra Streisand. That may not be fair to Brice, the legendary Ziegfeld Follies comedienne who also introduced one of Tin Pan Alley's most famous torch songs ('My Man'), but it proves just how indelibly Streisand has etched her portrayal of the gawky Yiddish clown into our collective consciousness. Not much footage exists of the real Brice, and as her memory fades, Streisand's impersonation looms ever larger — and with good reason. Few, if any, actresses could nail the slapstick humor, handle the vocals, and exude the proper degree of Jewishness to do Brice justice, but Streisand effortlessly inhabits the role in not one, but two motion pictures. The richly entertaining 'Funny Girl,' which earned Streisand a well-deserved Best Actress Oscar in her very first film, charts Brice's rise from awkward saloon singer to Ziegfeld stardom, and details her romance with and troubled marriage to suave gambler Nick Arnstein (Omar Sharif). 'Funny Lady,' made seven years later, chronicles Brice's post-Follies career and her troubled second marriage to songwriter-producer Billy Rose (James Caan). Though both films present a highly fictionalized version of Brice's life, Streisand's performance rings true, and makes us believe she is indeed Fanny Brice.

Okay, so we never really forget she's also Barbra Streisand (how could we?), but she masterfully merges the two personas. Sure, Brice wasn't as glamorous as Streisand, sang only half as well, and never married anyone who remotely resembled Sharif or Caan, but who ever said biopics were accurate? The musical formats of 'Funny Girl' and 'Funny Lady' make it somehow easier for us to buy into the romanticized biography, and though the former film markedly outshines the latter, both movies succeed as fine entertainment — which, of course, is their ultimate raison d'être.

'Funny Lady' begins at the dawn of Depression, and finds Fanny out of a job and contemplating her future after Ziegfeld goes bankrupt and her divorce from Arnstein is finalized. Enter Billy Rose, a brash, down-to-earth showman and Arnstein's antithesis. He needs Fanny's name on a marquee to make a name for himself, and she needs a show to sustain her career, so the two join forces professionally, which first leads to a tepid romance, then to a hasty marriage of convenience. Trouble brews, however, as their sizable egos clash and Fanny refuses to cut her ties to the no-good Arnstein, who keeps turning up like a bad penny.

While 'Funny Girl' remains one of the great musicals of the 1960s and a spectacular showcase for Streisand's formidable talent, 'Funny Lady' finds Streisand in full diva mode, exquisitely singing both old standards and a sparkling collection of new tunes by John Kander and Fred Ebb - all as she models a jaw-dropping array of outlandish, overtly sexy gowns in which Fanny Brice wouldn't be caught dead. The dress Streisand wears while ripping through the showstopper 'How Lucky Can You Get' - a powerhouse display of attitude, independence, defiance, and impeccable musicality that builds to a thrilling climax - features a neckline that plunges to her navel and a backline that ventures even further south. Both director Herbert Ross and Streisand herself often lose sight of Brice in this bloated, occasionally dull sequel that sacrifices story for big production numbers during the sluggish first hour, then races through the nine-year Brice-Rose marriage (reduced to four years in the film) in about 45 minutes. That's far too little time to depict the couple's differences, let alone resolve the complications posed by the return of Arnstein (again played by the debonair Sharif) and Fanny's ambivalent feelings toward him.

In 'Funny Girl,' Streisand believably performs Brice's on-stage musical numbers in the comedienne's goofy, self-deprecating fashion — leaving the more complex, Barbra-esque vocalizing for private, off-stage moments. 'Funny Lady,' however, blurs those lines, as it all but excises Brice's lunacy and instead tries to pass off the star as a serious singer á la Streisand. Although it's easy to revel in Barbra's glorious vocals, it's impossible to imagine Brice tackling such complicated arrangements or producing such pure, polished tones. ('Great Day' and 'If I Love Again' are Streisand tour de forces, but light years away from anything Brice would have attempted.) To her credit, Streisand nicely transitions Fanny into middle age, adopting a cynical coarseness that adds some spice to her relationship with Rose and welcome dimension to her character. Of course, just as Sharif is far more handsome than the real Arnstein, Caan in no way looks like the short, pudgy Rose. Still, Caan files a feisty, often sensitive portrayal, and more than holds his own with La Streisand.

'Funny Lady' possesses plenty of merits — good performances, a first-rate score, opulent production values, and a visual lushness that's "like buttah" — but when evaluated side by side with 'Funny Girl,' it can't help but come up short. Like many sequels, it tries too hard to compete with and outdo its beloved predecessor, both in length and style, and ends up a pale imitation. Even the exhilarating 'Let's Hear It for Me' loses some oomph by too closely mirroring 'Don't Rain on My Parade.' Instead of Babs on a tugboat, we get Babs on a biplane, soaring into the clouds as Brice races to tell Billy she's successfully flushed Arnstein from her system — a plot device eerily reminiscent of Scarlett rushing to Rhett at the climax of 'Gone With the Wind.' Oh, how the real Fanny would have gotten a kick out of that!

Brice once quipped, "With Nick Arnstein, I was miserably happy. With Billy Rose, I was happily miserable." Now, at last, we can witness both rocky relationships, as well as the spectacular singing and unique magnetism of Barbra Streisand, in high definition. The one and only Babs honors Brice with a heartfelt portrayal worthy of all the accolades it received — and one that hopefully will keep the comedienne's memory burning bright for generations to come. 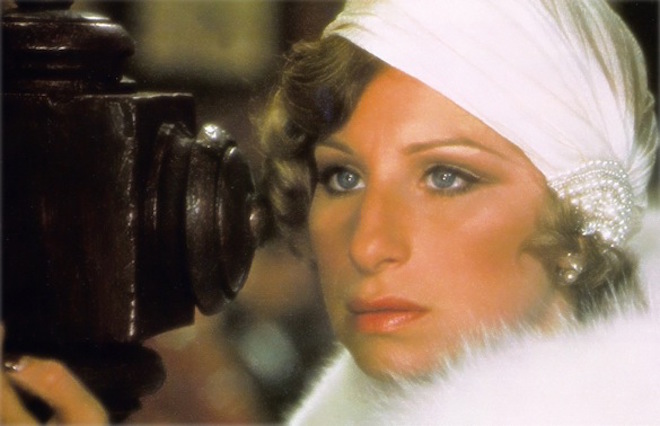 'Funny Lady' arrives on Blu-ray in a limited to 3,000 edition from Twilight Time packaged in a standard case. Typical of Twilight Time releases, an eight-page booklet featuring an array of photos from the film, a reproduction of the original poster art, and an essay by film historian Julie Kirgo (who doesn't try to mask her admiration of all things Streisand) is tucked inside the front cover. Video codec is 1080p/AVC MPEG-4 and audio is DTS-HD Master Audio 5.1. Once the disc is inserted into the player, the static menu without music immediately pops up; no previews or promos precede it.

'Funny Lady' looked great on DVD, but Twilight Time's 1080p/AVC MPEG-4 transfer raises the bar, dazzling the eye with a crisp hi-def image that beautifully suits the film's overblown production numbers and glitzy feel. Superb contrast and clarity help the image leap off the screen, while just a hint of grain adds appropriate texture and provides a fluid film-like experience. Colors, be they primaries or pastels, are bold and gorgeously saturated, and the cinematography by the legendary James Wong Howe exudes a luxurious lushness only a master of his caliber could produce. (Sadly, 'Funny Lady' would be his final film.) Black levels are deep and inky, whites are crisp and never bloom, and fleshtones remain natural and stable throughout. Shadow delineation is excellent, background elements are easy to discern, and close-ups nicely highlight Caan's ruggedness and Streisand's creamy complexion. Any minor print defects that dotted the previous DVD transfer are gone , and no digital issues or enhancements could be detected. 'Funny Lady' may not be the best movie musical, but it sure is splashy (pun intended), and this exceptional transfer brings out all the fine details and lustrous hues, making it a joy to watch.

Though the DTS-HD Master Audio 5.1 track doesn't feature much surround activity and seems to play best at a volume level a few notches higher than my usual setting, the sound is crystal clear, vibrant, and marvelously full bodied. Excellent fidelity, especially during the musical numbers, and superior depth and purity of tone distinguish this mix, which showcases Streisand's peerless vocals to perfection. Showstoppers like 'How Lucky Can You Get' (one of Streisand's all-time great performances), 'Great Day,' and 'Let's Hear It for Me' fill the room with power and pizzazz, while quieter songs, such as 'If I Love Again,' 'Isn't This Better?' and 'More Than You Know' exude an equally affecting resonance. Atmospherics, such as rain, are subtle yet palpable, bass frequencies are solid, and a wide dynamic scale handles all the highs and lows with ease. A few words of dialogue here and there are unintelligible, but for the most part, all conversations are easy to understand. No hiss, pops, crackles, or other age-related imperfections muck up the mix, and no distortion of any kind is present either. This track substantially improves upon the lossy Dolby Digital 3.0 audio that graced prior DVD releases, finally allowing us the opportunity to fully appreciate Streisand's awe-inspiring instrument.

A few vintage promotional featurettes and a couple of trailers comprise the disc supplements, a definite step up from previous DVD releases, which contained only song highlights. In an interesting twist, Twilight Time does not include an isolated music and effects track - one of the studio's staple features - for this beautifully scored musical. What's up with that?

Few musical biopics can eclipse 'Funny Girl,' and 'Funny Lady' doesn't, but this chronicle of the second chapter of comedienne Fanny Brice's turbulent life is an entertaining, if romanticized and historically inaccurate, sequel. A glamorous Barbra Streisand, in full diva mode, belts out a few memorable tunes and creates a comfortable chemistry with co-star James Caan, but amid all the humor, warmth, and style, the essence of Brice often becomes obscured and engulfed by Barbra's blinding aura. Twilight Time's superior Blu-ray presentation is a sensory treat, with a dazzling video transfer and excellent audio showcasing the movie's sumptuous production values and Streisand's potent pipes. This release also boasts more supplements than previous home video editions of the film. Musicals fans and Barbra-holics will certainly want to add this 'Funny Girl' companion piece to their collections, but for others, the appeal of 'Funny Lady' may be limited.