Overview - Will and Jake Grimm are travelling con-artists who encounter a genuine fairy-tale curse which requires genuine courage instead of their usual bogus exorcisms.
OVERALL
For Fans Only 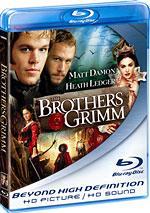 Surrealism in cinema is dangerous business. When it works, it can be beautiful, bold, thrilling and transcendent -- capable of reaching the kind of artistic heights a straightforward narrative could never hope to achieve. When it doesn't work, however, it can be pretentious, self-indulgent, and ingratiating. From masterworks like 'Brazil' and '12 Monkeys' to outright disasters like the recent 'Tideland,' perhaps no other commercial filmmaker has straddled this line more precipitously than Terry Gilliam.

Unfortunately, 'Brothers Grimm' just doesn't rank up there with the director's best. The story is certainly an intriguing take on the literary legends. Gilliam, working from a script by Ehren ('Scream 3,' 'The Ring') Krueger, re-imagines the brothers as mere crooks, less out to dazzle children with magical fairytales than to swindle their parents out of money by pretending to fight witches and monsters. But when a Scooby-Doo-like mystery suddenly befalls the village of Marbaden, the brothers have a chance to redeem themselves by preventing the sacrifice of twelve girls to the evil Mirror Queen (Monica Bellucci).

On paper, the 'Brothers Grimm' seems perfectly suited to Gilliam's sensibilities. And the film is often beautiful to behold, with wonderfully inventive sequences, fantastic visuals, and quirky humor. But something about the movie just feels inorganic, as if all the disparate parts end up clashing, instead of complimenting each other. Gilliam also seems to be caught in the trap of art versus commercialism. The story could obviously have been appealing to mainstream audiences, but Gilliam just is not a sentimental enough filmmaker to wring the required emotional pathos out of the Brothers' redemptive journey. It is easy to imagine where a Spielberg might have taken this material, but Gilliam seems more interested in his characters heads, and not their hearts.

Somewhat surprisingly, the performances don't help. As the Brothers, Heath Ledger and Matt Damon would appear to be inspired casting. But Ledger seems to be phoning it in, with his usual facial tics and garbled speech, while Damon just seems lost. The supporting players are stronger, particularly the always-dependable Jonathan Pryce as decadent Delatombe and the underrated Bellucci, but still everyone seems to be acting in different movies. It's like watching a table read where the actors are still feeling out their parts, and no one ever quite nails it.

Much has been made of the post-production squabbling between Gilliam and producers the Weinstein Brothers. It is no surprise that ol' Harvey and Bob are tough to work with -- they are legendary in Hollywood for their tempers and patronizing attitude toward even A-list filmmakers. But quite frankly, it is not the editing of the 'Brothers Grimm,' or an incoherent script, or a lack of budget, that is the problem. Even on the level of individual scenes, which Gilliam apparently had full control over, the tone never gels. The film just doesn't work -- either as a fantasy, an adventure, a comedy or a thriller. It's a mishmash of parts that, however wonderful to look at, together add up to very little.

Disney offers up a 1080p/AVC MPEG-4 transfer for 'Brothers Grimm' and it is excellent. The film benefits greatly from Terry Gilliam's usual fanciful visual style, which is rich, lush, evocative and wonderfully surrealistic.

Every element of the presentation is superior. The source is pristine, with pure blacks and clean, smooth contrast across the entire grayscale. Whites have nice pop in the high-end, but don't bloom, which leaves the transfer very crisp yet pleasing. The film's color scheme tends towards brown, which gives it quite an earthy feel, but there are nice splashes of very vivid, very saturated primaries, particularly reds and greens. Hues remain wonderfully pure, with no noise or bleeding. Depth is also very striking -- 'Brothers Grimm' looks three-dimensional throughout. Gilliam uses lots of smoke and effusive lighting, yet the sense of texture to the world he has created often looks exquisite and extraordinary. Only a bit of softness on blue screen shots (largely backgrounds) lessens the effect. Otherwise, this is definitely one of the best Blu-ray transfers I've seen yet from Disney.

'Brothers Grimm' gets the uncompressed PCM 5.1 surround treatment in a mix encoded at 48 kHz/16-bit. The film's design is aggressive and exciting, and undoubtedly shines on Blu-ray.

Surround use is terrific. There are plenty of nifty discrete effects that fill the rear speakers, and lots of seamless pans to buttress the fanciful on-screen action. Timbre is rich and warm -- the orchestral score by Dario Marianelli is lushly rendered, and dialogue surprising prominent. Even Heath Ledger's most mumbly dialogue is always audible. Though 'Brothers Grimm' is not flush with deep bass, low frequencies are nice and tight, from the clobbering of horse hooves to the more surrealistic sound effects.

Although the standard-def release of 'Brothers Grimm' came with more substantial extras, Disney has ported over a couple of the main ones for the Blu-ray release.

The highlight is the screen-specific audio commentary with Terry Gilliam. It's is actually quite low-key. I don't know if the director was simply beaten down by his now-legendary rows with the Weinstein Brothers or he was just having a no-Starbucks morning, but despite the lack of energy, there are some fascinating tidbits here. Steven Soderbergh was actually a consultant on the film, though I have to say I don't see his influence anywhere in 'Brothers Grimm.' PETA fans will also not like this track, as Gilliam is surprisingly candid about the number of abuses heaped on the animals during the shoot, including ravens tied to trees and a dead horse. Er, how nice.

The only other supplement is a clutch of 12 Deleted Scenes. Gilliam again provides optional commentary, but for me, none of these were particularly interesting, and were wisely cut. Though talk continues that Gilliam's film was destroyed by the studio, looking at this material, I have to wonder where all this supposed buried treasure is hidden.

'Brothers Grimm'isn't Terry Gilliam's finest hour. I like much of the director's work, but here the elements of comedy, fantasy and adventure just don't mesh very well. This Blu-ray release, however, is really quite good. Both the transfer and soundtrack are excellent -- up there with Disney's best efforts. Only a slimmed-down supplement package disappoints. Diehard Gilliam fans should definitely give this one a look -- everyone else, you've been warned...

Sale Price 5.59
Buy Now
3rd Party 2.81
In Stock.
See what people are saying about this story or others
See Comments in Forum
Previous Next
Pre-Orders
Tomorrow's latest releases