He was called The Voice, Ol' Blue Eyes, and The Chairman of the Board. He was a teen hearthrob for millions of bobby-soxers, a mellifluous-toned dreamboat for the middle-aged set, and the grand old man of standards in his golden years. He was a legend, an icon, and a cool cat who possessed one of the all-time great vocal instruments. And he was also a movie star, winning an Oscar for Best Supporting Actor in 'From Here to Eternity' and snaring a Best Actor nomination for his portrayal of a heroin addict in 'The Man With the Golden Arm.' Though he excelled in dramatic roles on occasion, he specialized in musicals and light comedy, genres which show off his charm, style, and velvety pipes. 'Frank Sinatra: 5-Film Collection' groups together a quintet of the singer-actor's most famous and identifiable films, even if they can't be considered his best. Three of them - 'Anchors Aweigh,' 'On the Town,' and 'Robin and the 7 Hoods' - are new to Blu-ray, while two - 'Guys and Dolls' and 'Ocean's 11' (for complete reviews of those films, click on their respective titles) - have been previously released. Each movie showcases the essence of Sinatra, from boyish romantic to city slicker to swingin' Rat Packer, and spotlights the unique qualities that make this lanky Italian from Hoboken a magnetic screen presence.

Sinatra made a name for himself singing with Tommy Dorsey's big band, then answered Hollywood's call and appeared in a couple of minor, low-budget musicals for RKO before joining the elite ranks at MGM, where he really came into his own as a film personality. His first movie at the studio, 'Anchors Aweigh,' teamed him with Gene Kelly, who taught Sinatra how to hoof, and the duo instantly captivated audiences. Though this musical behemoth runs a whopping 143 minutes (and overstays its welcome by a good hour), a few classic numbers make it worth slogging through. Of course, the most famous sequence - Kelly's ebullient and technically dazzling dance duet with cartoon character Jerry the Mouse (of Tom & Jerry fame) - doesn't even include Sinatra, but the singer enjoys several fine moments, crooning the melancholic ballad 'I Fall in Love Too Easily' and joining Kelly for an athletic dance in a naval barracks in which the two bounce up and down on cots, leap through the air, and execute some flashy synchronized tap steps. The story of two sailors on leave in Hollywood who both end up vying for the affections of an aspiring singer (Kathryn Grayson) is wispy at best, but some fine tunes, luscious Technicolor, and the grace and sincerity of the trio of young stars keep it afloat...just barely. Too much piano playing by Spanish virtuoso José Iturbi and one Kelly dream sequence too many stall the film, which would benefit tremendously from some judicious trimming. Rating for 'Anchors Aweigh': 3 stars

Four years later, Sinatra and Kelly put on their sailor suits again for some more rollicking shore leave, this time on the East Coast, in the classic adaptation of the Leonard Bernstein-Adolph Green-Betty Comden stage hit 'On the Town,' which Kelly co-directed with Stanley Donen. Best known for its New York location shooting and the rousing opening number that takes us to almost all of the city's iconic landmarks, this colorful film follows a trio of sailors (Jules Munshin is the third) as they explore and find romance in the Big Apple during a hectic 24-hour furlough. Only two vocal numbers - 'New York, New York' and 'Come Up to My Place' - are retained from the Broadway score, and the new songs (with the exception of the sprightly title tune) are decidedly second-rate. The energetic cast, which includes Ann Miller, Vera-Ellen, and Betty Garrett, gives it their all, but a thin plot stymies the film, despite several terrific sequences. Sinatra asserts himself well, but he's clearly a second banana to Kelly (interestingly, Sinatra received top billing in 'Anchors Aweigh,' but Kelly supplants him here), and he's not even given a solo number. Rating for 'On the Town': 4 stars

By the time 'Robin and the 7 Hoods' came along 15 years later, Sinatra was an Oscar-winning actor, a top recording artist, and the leader of a group of Hollywood bad boys known as The Rat Pack. With buddies Dean Martin and Sammy Davis, Jr. (as well as Peter Lawford and Joey Bishop), Sinatra and his Rat Pack cronies scored with the slick Vegas heist flick 'Ocean's 11' (for a complete review of that film, click here). Huge box office returns made a follow-up mandatory, and though this musical update of the Robin Hood legend rarely hits the bullseye (and too closely resembles Frank Capra's 'Pocketful of Miracles'), it possesses a healthy entertainment quotient. Set in Prohibition-era Chicago and chronicling the oneupsmanship of two rival gangster mobs and a femme fatale (Barbara Rush) who tries to outsmart them both, this high-spirited, Runyon-esque romp is most noteworthy for introducing what would become one of Sinatra's signature songs - 'My Kind of Town.' Bing Crosby and Peter Falk (who does almost a note-for-note impersonation of his Oscar-nominated performance in 'Pocketful of Miracles') sub in for Lawford and Bishop on the Rat Pack roster, raising the stakes with sparkling portrayals that boost the mediocre script. A few more numbers and a lot less talk would improve Gordon Douglas' film, which runs several minutes too long and often believes itself to be more clever than it is. Rating for 'Robin and the 7 Hoods': 3 stars

Sadly, 'Robin and the 7 Hoods' would be the final musical of Sinatra's career, but his voice and personality live on in countless films spanning five decades. Though it's a shame Warner Home Video chose to pad this collection with two previously released titles, the performances here rank among Sinatra's most popular, and allow us to see his talents and persona mature. Contrary to what the theme song of the popular NBC reality show might profess, "This is The Voice," now and forever. Sinatra has no equal in the singing department, and even if his movies don't always make the grade, the man and his music consistently merit straight As. 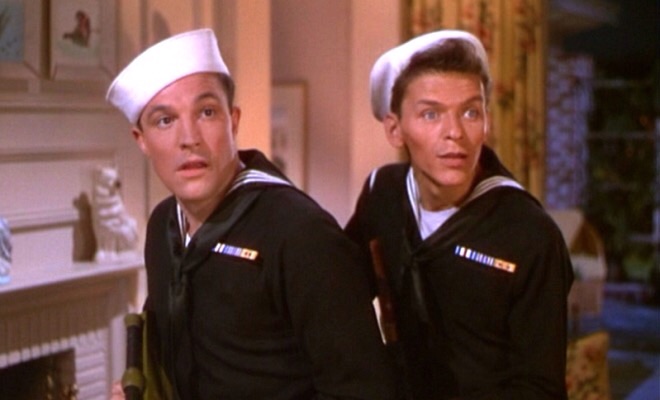 'Frank Sinatra 5-Film Collection' arrives on Blu-ray in a handsome and sturdy cardboard box set. Inside lies a 5-disc digipack and a 32-page hardcover photo book, which includes multiple scene shots, behind-the-scenes stills, and full-color poster art for each movie. (Surprisingly, though, several pictures do not even feature Sinatra.) Video codec is 1080p/AVC MPEG-4 and audio for all films except 'Guys and Dolls' is DTS-HD Master Audio 1.0. ('Guys and Dolls' sports a DTS-HD Master Audio 5.1 track.) Once the discs are inserted into the player, the static menus with music immediately pop up; no previews or promos precede them.

Sinatra fans, rejoice! The three new-to-Blu-ray films in this collection - 'Anchors Aweigh,' 'On the Town,' and 'Robin and the 7 Hoods' - look absolutely stunning in high definition. Warner's exceptional 1080p/AVC MPEG-4 transfers burst with bright, beautifully saturated colors, wondrous clarity, and terrific contrast. Grain is ever so faint, but never do the images look overly processed, and only a few errant specks dot the meticulously restored source material. In 'Anchors Aweigh' and 'On the Town,' rich, inky black levels, crisp, vibrant whites, and natural, stable flesh tones nicely balance the picture, offsetting the color's breathtaking brilliance. Three-strip Technicolor can often look garish and gaudy when improperly timed, but the hues here are gorgeously lush and life-like. Bold, vibrant primaries punch up countless sequences (reds are especially vivid) and delicate pastels add soft shadings that help create a picture-perfect whole. The close-ups of Kathryn Grayson in 'Anchors Aweigh' are suitable for framing, and those of Sinatra and Kelly exhibit plenty of subtle detail, while the New York locations in 'On the Town' jump off the screen, immersing us in the hustle and bustle of the Big Apple. 'Robin and the 7 Hoods,' shot in single-strip color, doesn't possess as much pop, but still looks very good indeed, thanks to superior contrast and a well-modulated palette. No noise, banding, or other digital issues affect any of the transfers, and any enhancements are seamlessly integrated so they escape notice. Both 'Anchors Aweigh' and 'On the Town' earn unqualified five-star ratings, while 'Robin and the 7 Hoods' checks in with a very strong four-star score. (For complete reviews of the 'Guys and Dolls' and 'Ocean's 11' video transfers, click on each film's title.)

DTS-HD Master Audio 1.0 tracks grace the three new-to-Blu titles, and the clear, well-balanced sound belies each film's vintage nature. Any age-related imperfections, such as hiss, pops, and crackles, have been scrubbed away, and a wide dynamic scale maximizes the impact of the vocals and instrumentals while keeping distortion at bay. Though some of the audio isn't as robust as one might like or the musical genre demands ('Robin and the 7 Hoods' really could have benefited from a 5.1 remix), the sound remains consistently full-bodied, if somewhat lacking in fidelity. Ambient effects aren't very discernible, but the tap dancing is distinct, and all the dialogue is easy to comprehend. Of course, from an audio standpoint, the 'Frank Sinatra Collection' lives and dies by its treatment of Sinatra's vocals, and I'm happy (and relieved) to report they've been treated with the utmost care, flaunting a lovely resonance and silkiness that's practically swoon-inducing. While there's only so much that can be done with mono tracks, these transfers bring out their best, and all of them rate a solid four stars. (For complete reviews of the 'Guys and Dolls' and 'Ocean's 11' audio transfers, click on each film's title.)

A number of interesting extras flesh out this multi-disc release. Though more content specific to each film would have been appreciated (I'm a huge fan of retrospective featurettes), the vintage material included ties in well to each title and is both interesting and entertaining.

For a complete review of the 'Guys and Dolls' supplements, click here.

For a complete review of the 'Ocean's 11' supplements, click here.

Robin and the 7 Hoods

If truth be told, Frank Sinatra didn't make a lot of great movies, but the titles included in 'Frank Sinatra: 5-Film Collection' - though far from his best - represent a nice cross section of the Chairman of the Board's cinematic contributions, especially in the musical comedy genre. 'On the Town' is the grouping's major drawing card, but even that innovative musical is frustratingly uneven and, despite some killer numbers, a bit dull. The video transfers, however, are anything but, and the superb restorations will knock the socks off even the most jaded videophile. Solid audio transfers, an entertaining array of supplements, and handsome packaging also beef up the appeal of this substantive box set. And yet, unless you're a dyed-in-the-wool Sinatra diehard (and don't already own 'Guys and Dolls' and 'Ocean's 11'), you might just want to purchase the discs that suit your fancy individually. Still, largely on the basis of the stunning video treatments of these golden era films, this collection merits an enthusiastic recommendation.

Sale Price 19.97
Buy Now
3rd Party 19.77
In Stock.
See what people are saying about this story or others
See Comments in Forum
Previous Next
Pre-Orders
Tomorrow's latest releases