Animals become monsters - and a man becomes part animal - in this sci-fi shocker starring Burt Lancaster and a galaxy of mutant monsters created by some of the make-up legends behind Planet of the Apes. On a tropical Pacific island, the mad Dr. Moreau (Lancaster) has set out to fool Mother Nature, conducting nightmarish genetic experiments that have resulted in Lionmen, Tigermen, Bearmen and other marauding monstrosities. But when a storm at sea washes shipwreck survivor Braddock (Michael York) ashore, the sinister surgeon devises a diabolical plan to dispose of his meddling and uninvited guest. Partially transformed into one of Moreau's monstrosities, Braddock must escape from this tropical hell before the mad surgeon can finish the job... of bringing out the best in him!

Of the three direct, English-spoken adaptations of H.G. Wells's 1896 sci-fi classic The Island of Doctor Moreau, 1932's 'Island of Lost Souls' remains the best and most memorable version. Thinking a bit on that statement, it's rather sad that in the over hundred years of cinema we have yet to see a rewarding telling of such an inventive novel. But thankfully for Wells fans everywhere, there is a good reason this pre-Hays Code film starring Charles Laughton and Bela Lugosi continues to delight.

Under the capable hands of Erle C. Kenton ('House of Frankenstein,' 'House of Dracula'), the dark fantasy adventure came with a hauntingly surreal noir flair that often toyed with the possibility of suddenly spiraling into a nightmare. That is until it finally does in the final quarter, leaving behind a frightening reminder of the dangers of playing God. The film is still stylishly beautiful to watch while also inspiring a horrifying scenario of humanity's innate — but often ineptly executed — desire to control Mother Nature. The film's lasting influence, from a script by Philip Wylie and Waldemar Young, can be seen in later productions also based on the book where a female character — a feline-human hybrid — plays a central role, with John Frankenheimer's troubled production being the last.

Over forty years since Kenton's deliciously dark take, American International Pictures (AIP) attempted a modern retelling with the obvious hopes of utilizing the best in makeup effects available at the time. In that respect, the 1977 movie succeeds admirably well. The work of Tom Burman & John Chambers remains just effective as ever, a reminder of the talent behind such practical wizardry before the advent of digital magic brought it to a halt and recently forced legends of the field like Rick Baker into retirement. Aside from other smaller noteworthy moments, this version is ultimately worth the watch precisely for this reason. 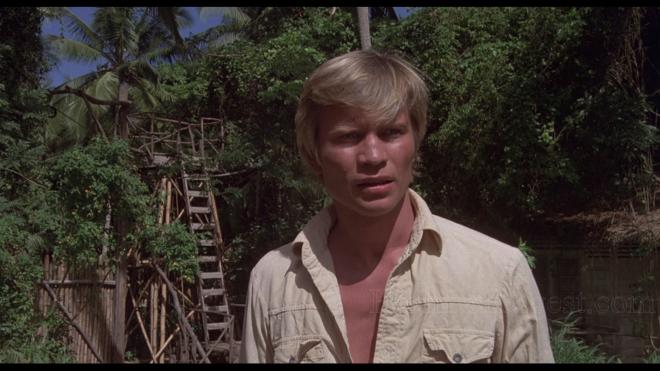 At the start, soon after the arrival of shipwrecked survivor Andrew Braddock (Michael York), audiences are teased with glimpses, mostly shadowy figures in the distance, of the animal hybrids populating the mysterious island governed by the cryptically ominous Dr. Moreau (Burt Lancaster). When able to finally walk about, Braddock is ordered to never wander outside the walls of the compound protecting the doctor's home, but at night, the agonizing cries of animals howling in pain and the rustling of plants on the other of the wall seem to beg for the curious engineer to investigate. When we're finally allowed to see one of the anguished creatures, we're shocked to discover the screams came from a man with the distorted face of a bear lying on a gurney.

Director Don Taylor, probably best known for his performance as Buckley in the 1950 comedy 'Father of the Bride,' does great behind the camera, patiently building towards that shocking moment and allowing viewers to appreciate the work of makeup artists. Sadly, he isn't able to maintain the same sort of interest and mystery for the remainder of the movie's 99-minute runtime. But as he demonstrated six years earlier in the much better and entertaining 'Escape from the Planet of the Apes,' Taylor knows how to work with special effects to impress viewers and stage some thrilling action sequences. In the last half hour when the island erupts into chaos and the disintegration of social order, audiences are treated to several dangerous-looking stunts where actors either run from or fight with various wild beasts. The entire spectacle harkens back to the B-movie schlock of decades earlier, and it makes for a satisfying climax.

Ultimately, the production's failure comes from a disappointingly uninspiring screenplay by Al Ramrus and John Herman Shaner. The story is peppered with tedious conversations that fail to even bring into question the moral quandaries and philosophical themes of human interference found in Wells's novel. Granted, York and Lancaster do their best with the material — their performances being another positive — and make attempts at touching on some worthwhile ideas, but they are only given cursory attention in favor of the action. Montgomery (Nigel Davenport) is viewed as a grumpy, big-game hunter with a macho complex while the beautiful Barbara Carrera does her best to portray the femme fatale in the vein of Kathleen Burke, but she's never given ample to establish her seductive prowess and lacks any chemistry opposite York.

Fans of Well's novel and Kenton's 1932 adaptation are kept on their toes with a few unexpected surprises — primarily some drastic alterations from the original source, like Braddock finding himself as Moreau's latest guinea pig — but overall, it doesn't quite satisfy and best remembered for it's amazing makeup effects and amusing stunt work.

Kino Classics brings 'The Island of Dr. Moreau (1977)' to Blu-ray on a Region A locked, BD25 disc inside the standard blue keepcase. At startup, viewers are taken directly to a static main menu.

The doctor conducts his atrocious experiments with a strong and sometimes fetching AVC-encoded transfer. Showing that the source used has aged quite nicely, the 1.85:1 image arrives with a bold and varied palette, and the contrast is comfortably bright with clean, crisp whites throughout. Black levels are also accurate with several inky rich moments, giving the presentation a lovely cinematic quality. An ultra-fine layer of grain washes over the video, adding to the transfer's film-like appearance. Overall definition and resolution are great with sharp detailing along the surrounding foliage and Moreau's house. Flesh tones appear natural with some appreciable textures and visible pores during close-ups.

However, there are a good number of poorly resolved moments which are softer than others, and a couple sequences appear a tad dull. Thankfully, they are not too terrible or all that distracting.

Moreau continues his research abominations with a very good and generally satisfying DTS-HD MA mono soundtrack. Although restricted to the center channel, the soundstage feels broad and spacious, generating a wonderfully pleasing sense of presence. Background activity is distinct and continuous throughout, exhibiting detailed clarity and good differentiation in the mid-range. Though it's not particularly varied and dynamic, the lossless mix is nonetheless enjoyable and engaging. Dialogue reproduction is distinct and well-prioritized, and most surprising is a responsive low-end that adds appreciable weight and depth to the music and the few action sequences.

Starring Burt Lancaster and Michael York, director Don Taylor attempted to adapt H.G. Wells' classic 'The Island of Dr. Moreau' for modern audiences, but the end result was a rather lackluster interpretation of the material, best remembered for its performances, makeup effect and stunts. The Blu-ray from Kino Classics arrives with a surprisingly good and satisfying audio and video presentation but lacks any noteworthy supplements. The overall package will ultimately tempt fans, but the curious should give it a rent first.