The Prime of Miss Jean Brodie

More than three decades before she donned a wizard's robe to play Professor McGonagall in the 'Harry Potter' films, Maggie Smith won a well-deserved Best Actress Oscar for portraying another inspirational British teacher. And although Jean Brodie remains a far more complex and controversial figure than the firm but gentle McGonagall, Smith brings her patented eccentricity to both women, making them unique and memorable. The major difference between the two is that McGonagall always acts in her students' best interests, while Brodie's motives seem carefully designed to foster her own glorification, so she may forever continue in her "prime."

'The Prime of Miss Jean Brodie' treats its subject like the queen she believes herself to be, and depicts the final years of her glorious and turbulent reign at the Marcia Blaine School for Girls in Edinburgh, Scotland. Ronald Neame's film gingerly blends comedy, drama, and Brodie's quirky personality, but the resulting brew, like a fine hollandaise sauce, often breaks down. And unfortunately, no one involved — not even the marvelous Smith — can provide the necessary quick fixes to bind it back together.

Although well-liked, respected, and, at times, worshipped by the girls she educates, Brodie is most definitely a legend in her own mind. She thumbs her nose at the curriculum mandated by the school's headmistress, Miss Mackay (Celia Johnson), preferring to stoke the passions of her "girls" with lectures on art, music, and the mysteries of love. Brodie doesn't really teach, but rather holds court in her classroom, imprinting her influence on a sea of young minds. ("You will always be Brodie girls," she says with finality.) Her controversial ideas and methods — such as singing the praises of fascism — land her in hot water with the school's administration, and her progressive views on sex and relationships torture the men in her life: Teddy (Robert Stephens, Smith's real-life husband at the time), a married artist with six children; and Gordon (Gordon Jackson, best known as Hudson in the classic British TV series, 'Upstairs, Downstairs'), a middle-aged bachelor who also teaches at the school.

One of Brodie's favorite pastimes involves predicting what paths of life her students will follow. "I am a potter and you are my pride," she tells them. Her amazing degree of success can be attributed more to her girls' intense desire to realize her vision than any prescience. But with a particular core group, the game backfires, spelling tragedy for one and inspiring another to rebel and ultimately expose the manipulative egotist lurking beneath Brodie's benevolent façade.

Meticulously produced and well acted by a sterling British cast, 'The Prime of Miss Jean Brodie' remains, as the Scots might say, a wee bit precious for contemporary tastes. A subtle but annoying pretension permeates the film, making it difficult to embrace. And let's face it, Jean Brodie is hardly the type of character around which an audience wants to wrap its arms. (Julia Roberts in 'Mona Lisa Smile' she is not.) That said, we do admire Brodie's independent spirit and disregard of social mores, and can understand why a group of impressionable adolescent girls — especially in 1932 — might make her their heroine. On the other hand, we can also empathize with Miss Mackay's concerns, and, as parents, would think twice (and probably thrice) before allowing Brodie to shape and mold our own kids.

Dame Maggie, of course, carries the movie, but its weight often strains even her talented shoulders. Part of Smith's genius is her ability to convey all the conflicting facets of Brodie's character, then tie them together to create a fiercely human portrait. You may not like Jean Brodie, but it's hard not to love Maggie Smith, and once seen, her uncompromising portrayal becomes indelibly etched in our memories. Neame's languorous direction, on the other hand, keeps the film's engine from properly revving until the climax, despite some frank depiction of teen sexuality. As Miss Mackay, the supremely talented Johnson (who 25 years earlier broke our hearts in 'Brief Encounter') makes a formidable adversary, and it's a shame her part wasn't enlarged. Pamela Franklin, as the pivotal Sandy, also holds her own with Smith, believably crafting a difficult role.

'The Prime of Miss Jean Brodie' calls to mind other British classics dealing with revered teachers — films like 'Goodbye, Mr. Chips' and 'The Browning Version' — but it never achieves the same emotional depth. Smith tries her best to tug our heart strings, but like many of the characters in the film, the movie ultimately leaves us cold.

'The Prime of Miss Jean Brodie' arrives on Blu-ray in a limited to 3,000 edition packaged in a standard case. Tucked inside the front cover is an eight-page booklet featuring an essay by film historian Julie Kirgo, reproductions of an Al Hirschfeld cartoon and the movie's original poster, as well as numerous color scene shots. Video codec is 1080p/AVC MPEG-4 and audio is DTS-HD Master Audio 1.0. Once the disc is inserted into the player, the static menu without music immediately pops up; no previews or promos precede it. 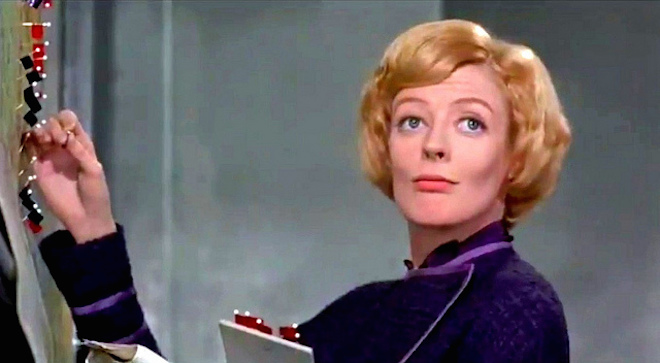 Twilight Time has nicely spruced up the previous DVD transfer in the Fox Studio Classics series, erasing the faint speckling that plagued the previous rendering, yet maintaining the fine grain structure, stellar contrast, and superior clarity. The vivid image occasionally looks a bit too bright, but the vivacity of the color palette has been improved. The verdant greens of the Scottish landscape look more lush, and the sunny patterns of Miss Brodie's colorful outfits nicely pop against the more austere backgrounds of the venerable Marcia Blaine School. At times, Smith's hair looks a bit too orange, but skin tones always appear natural, and close-ups enjoy exceptional detail levels, especially those of the aged Celia Johnson. Shadow detail remains very good throughout, black levels are appropriately rich, and even heavy patterns resist shimmering. No banding, noise, or other digital issues afflict the 1080p/AVC MPEG-4 transfer, and any artificial enhancements have been judiciously applied. Though the previous DVD was quite good, this Blu-ray edition surpasses it, making an upgrade essential for fans.

The lossy stereo track on the previous DVD has been replaced by a well-modulated DTS-HD Master Audio 1.0 track that benefits from solid fullness and depth of tone. The film's talky nature makes understanding dialogue essential, and thankfully all the exchanges are easy to comprehend, despite some thick Scottish accents. Rod McKuen's flowery score becomes a bit overbearing at times, but a wide dynamic scale keeps any hints of distortion at bay. Age-related imperfections, such as hiss, pops, and crackles, have been dutifully removed, leaving a clean, vibrant track that beautifully complements this intimate film.

All the extras from Fox Studio Classics DVD, with the exception of the still gallery, have been ported over to this Blu-ray release.

'The Prime of Miss Jean Brodie' may creak a bit around the edges, but Smith's Oscar-winning performance remains as fresh and compelling as it surely was 45 years ago, outshining a stagy film that only really grabs us toward the end. Director Ronald Neame's chronicle of a renegade, free-spirited teacher and her questionable influence on her impressionable charges meanders along and may even try the patience of traditional chick flick fans, but the strong portrayals and literate presentation make it worth watching. Twilight Time's Blu-ray presentation features a lush video transfer and solid audio, but supplements are slim (although the top-notch audio commentary earns high marks). Though Smith has filed many memorable performances throughout her lengthy career, this is arguably her finest hour, and for that reason alone, 'The Prime of Miss Jean Brodie' is recommended.