In the Penguins of Madagascar, audiences will discover the secrets of the most entertainingly mysterious birds in the global espionage game. Skipper, Kowalski, Rico and Private now must join forces with the chic spy organization, the North Wind, led by Agent Classified to stop the cunning villain Dr. Octavius Brine from taking over the world.

As a completely unnecessary, uncalled-for, and needless entry in an already packed franchise — well, aren't they all, frankly — 'Penguins of Madagascar' manages to surprise and charm its way into the series without missing a beat. With their commando-style demeanor, feigning themselves like a cross between the 'A-Team' and IMF agents, the four short-legged chums served the series well in short, fleeting spurts of wisecracks, military bombast, and oozing hilarious masculine bravado in defiance of plainly fatal peril. The thought of sitting through 90-minutes of that shtick, at first, sounds like an exhaustive and vain cash-grab, a joke that works best as a passing, elbow-jabbing gag stretched to a tedious chore targeted at the youngest. Thankfully, the fourth installment to the misadventures of escaped zoo animals offers plenty of one-liners, silliness, and witticisms to keep even the grumpiest among us smiling and laughing.

Part of these characters' appeal is that penguins are naturally adorable, cuddly, harmless creatures, yet these four little guys intentionally go against type, knowingly defying presumptions with funny short-tempered brazenness. A brief, self-aware origins epilogue, thanks to a documentary crew following their march across Antarctica, shows the Skipper (Tom McGrath), Kowalski (Chris Miller) and Rico (Conrad Vernon) as chicks breaking formation and resisting the natural order of their cuddliness. An impromptu rescue mission to save an egg, from which later Private (Christopher Knights) hatches, shows the quartet of flightless aquatic birds naturally poised for thrill-seeking adventures and covert operations. Adrift on an iceberg, leaving us to wonder when they arrive at the Central Park Zoo, their resistance to cuteness becomes the running gag, especially when opposed by another foursome of adorable animals. 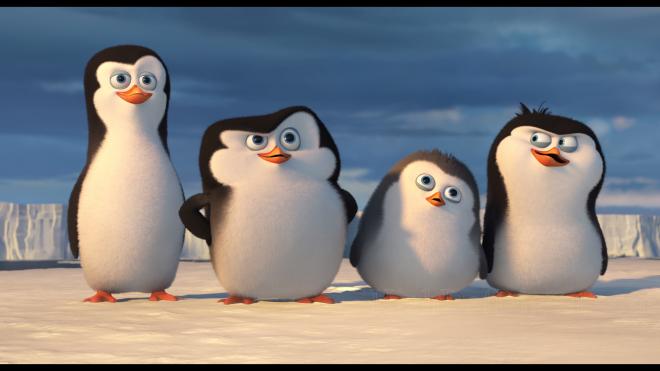 Afterwards, directors Eric Darnell and Simon J. Smith pick up moments after the third 'Madagascar' feature finished, making this both a sequel and a spin-off. And while the rest of the gang seems content as circus performers, the four charismatic soldiers literally cannon-blast away from the limelight to the last vending machine selling the discontinued Cheesy Dibbles. Later, the exceedingly messy puffed corn snack turns up for a noisy gag. Though the narrative logic is questionable, the venture for a late-night snack celebrating Private's birthday is nonetheless entertaining while also introducing the plot's baddie, a resentful and cynical octopus simply named Dave (terrifically voiced by John Malkovich). Sometimes disguising himself in human form as Dr. Octavius Brine, he's a great addition and highlight, tailored after the stock James Bond villain, brilliantly working as the ugly to our heroes' cute. And he's at his best when calling to his smaller octopus cronies in hysterically creative names of celebrities. ("Charlize, they're on the ray! Helen, hunt them down! Will, hurt them! Halle, bury them! Hugh! Jack! Man the battle stations! Kevin! Bake on! We're still going to need that victory cake!")

Bringing us back to what makes 'Penguins of Madagascar' work and as a surprisingly enjoyable installment to the 'Madagascar' universe, the jokes and gags are whimsically lively jabs delivered in quick, rapid-fire order of say it and move on. Each scene functions like short skits with energetic frenzy, much the same way fans enjoyed the foursome in the previous three films but interconnected by a mission to end Dave's dastardly plan. Helping the penguins are a professional, mysteriously well-funded team of elite spies called the North Wind and led by the overzealous gray wolf Classified (Benedict Cumberbatch). His demolitionist seal Short Fuse (Ken Jeong) doesn't care for Rico's style, and intelligence officer Eva (Annet Mahendru) becomes Kowalski's love interest while the muscular polar bear Corporal (Peter Stormare) can't resist cuddling the penguins. The frenetic, boldly colorful madcap pranks will have kiddies glued while the parents can laugh at the cheeky, self-aware tomfoolery of talking animals saving the day in this convoluted sci-fi, espionage action-adventure.

DreamWorks and 20th Century Fox Home Entertainment bring 'Penguins of Madagascar' to Blu-ray as a two-disc combo pack with a flyer for a Digital HD Copy. With a glossy cardboard slipcover, the Region Free, BD50 disc sits comfortably opposite a DVD-9 copy inside a blue, eco-cutout case. After skipping a few trailers at startup, viewers are taken to a menu screen with full-motion clips and music playing in the background.

The penguins take flight on Blu-ray with a highly-detailed and squeaky-clean 1080p/AVC MPEG-4 encode that shows a lush, varied array of colors. Luxurious, brilliant primaries invigorate the screen with life and action while softer secondary hues are richly saturated and vivid, dazzling the eyes from start to finish. Spot-on contrast provides comfortably bright and crisp whites throughout, making the most minuscule detail in the background crystal-clear, while opulent blacks wash the 1.85:1 frame with deep, penetrating shadows and excellent dimensionality. Fine lines and objects are resolute and very well-defined, making individual hairs of the furry critters distinct while Dave looks particularly slimy.

Being short-legged and flightless doesn't stop this quartette of thrill-seeking aquatic birds from delivering an action-packed and exhilarating DTS-HD Master Audio soundtrack. Imaging is immaculate with fluid movement between the channels, generating a broad soundstage with excellently discrete off-screen effects. The mid-range is expansive with outstanding definition and separation in the highs, providing the many action sequences with plenty of crystal-clear clarity while vocals remain distinct and well-prioritized. The low-end is of the mid-bass variety, but it's plentiful and weighty. With lots of detailed atmospherics and often-immersive directionality, rear activity creates a terrifically satisfying soundfield, where the canal chase scene in Venice and the climactic New York showdown are the film's demo-worthy highlights.

As a completely unnecessary, uncalled-for, and needless entry in an already packed franchise, 'Penguins of Madagascar' manages to surprise and charm its way into the series without missing a beat. With their commando-style demeanor, fleeting spurts of wisecracks, military bombast and oozing of hilarious masculine bravado in defiance of plainly fatal peril, the penguins entertain with their frenetic, boldly colorful madcap pranks and cheeky, self-aware tomfoolery. The Blu-ray arrives with reference-quality video and an exceptional audio presentation. Supplements are small but quick and to the comic point, making this a great package for the whole family.

Sale Price 8.13
Buy Now
3rd Party 1.51
In Stock.
See what people are saying about this story or others
See Comments in Forum
Previous Next
Pre-Orders
Tomorrow's latest releases