Taking place largely over the course of one tense night, Carol Reed’s psychological noir, set in an unnamed Belfast, stars James Mason as a revolutionary ex-con leading a robbery that goes horribly wrong. Injured and hunted by the police, he seeks refuge throughout the city, while the woman he loves (Kathleen Ryan) searches for him among the shadows. Reed and cinematographer Robert Krasker (who would collaborate again on 'The Fallen Idol' and 'The Third Man') create images of stunning depth for this intense, spiritual depiction of a man’s ultimate confrontation with himself.

Two years before he directed the film noir classic 'The Third Man,' Carol Reed helmed an equally dark, gritty, and suspenseful tale dealing with desperation, isolation, and political unrest. 'Odd Man Out,' based on the novel by F.L. Green (who co-wrote the screen adaptation), follows a group of rebels in post-World War II Northern Ireland who plot to rob a linen mill to fund their organization. The heist goes smoothly, but the getaway hits a snag, leaving the gang's leader, Johnny McQueen (James Mason), severely wounded and separated from his mates. Alone, bleeding, and unable to seek help, he tries his best to stay alive on a wet, cold evening and find a safe haven where he can await a reunion with his comrades and devoted girlfriend, who valiantly try to rescue him before he's captured by the authorities.

'Odd Man Out' transpires over one tense eight-hour period, with abrupt changes in attitude, outlook, and weather altering the narrative landscape. Even before the robbery, Johnny's physical stamina is suspect; he's been in hiding for six months after escaping from prison, and his closest allies suggest he not jeopardize the mission's success by pushing himself into action prematurely. He doesn't heed their warnings, and when he's later abandoned, he finds himself at the mercy of frightened innocents, opportunists, eccentrics, and his own crazed psyche as he bounces around the city seeking shelter and sympathy. Time ticks cruelly by, and with each passing hour he feels weaker and less able to withstand the rigors of his arduous existence.

'Odd Man Out' was one of the first films to dramatize the militant conflict in Northern Ireland. (The nameless "organization" in the movie is most certainly the Irish Republican Army and the nameless city is probably Belfast.) The script tries its best not to take sides, but it's hard not to root for the well-intentioned yet hopelessly doomed insurgents, even though their deeds violate the law and cause violent mayhem. Their purpose seems to be for the common good, which lends the tale a tragic element, yet the screenplay's unwillingness (or, more likely, inability) to tread into political waters makes the gang's motives frustratingly ambiguous. (The prologue states the story is "not concerned with the struggle between the law and an illegal organisation, but only with the conflict in the hearts of the people when they become unexpectedly involved.") As a result, 'Odd Man Out' becomes a morality play dealing with issues of faith, justice, loyalty, and personal accountability. Though we sympathize with the film's "heroes," we know the code of the time won't let them escape retribution, yet the film does a fine job examining the personal dilemmas facing the characters, and their choices and impulses often still surprise us.

Few bleak movies look so beautiful. A master of mood, Reed creates an immersive, claustrophobic atmosphere brimming with suspense, duplicity, and dread. Almost immediately, darkness descends on the city, shrouding the characters in shadows, then rain drenches the streets, weighing them down and sapping their reserves. In the last act, the rain turns to snow as Johnny's hopelessness intensifies and begins to consume his soul. Noir touches abound, but Reed and cinematographer Robert Krasker venture beyond the genre's standard lighting and shot compositions during the inventive hallucination sequences and fashion some mesmerizing images, such as faces popping up in beer bubbles and paintings magically aligning to form a gallery of grotesque, judgmental portraits.

Though Mason says quite little and spends much of his time grimacing and slipping in and out of consciousness, his expressive face conveys a multitude of emotions that engender warm feelings and keep us rooting for his survival. His is a controlled, nuanced performance, and the actor himself often referred to it as the finest of his career. Equally understated, Ryan expresses a quiet yet unrequited longing for Johnny that's more spiritual than sexual, and her muted portrayal strikes a resonating chord. All of the supporting actors are interesting to watch; only Robert Newton as a maniacal, drunken artist goes a bit overboard, often slipping into caricature.

'Odd Man Out' won the BAFTA award as Best British Film of 1947 and received an Academy Award nomination for Best Film Editing the following year. Though it unjustly remains in the shadow of Reed's subsequent productions of 'The Fallen Idol' and 'The Third Man,' this thought-provoking, impeccably directed, and visually stunning movie ranks high on the list of British classics and deserves all the accolades it has received. (It reportedly inspired Roman Polanski to seek a career in motion pictures and stands as his favorite film of all time.) Other movies may deal more directly with the "troubles" that have consumed Northern Ireland for almost a century, but 'Odd Man Out' uses the strife to tell an engrossing and moving human tale that doesn't sugarcoat the seriousness of the situation. Few films can do that well, but 'Odd Man Out' is one of them. It's brooding, heartbreaking, and often brilliant. 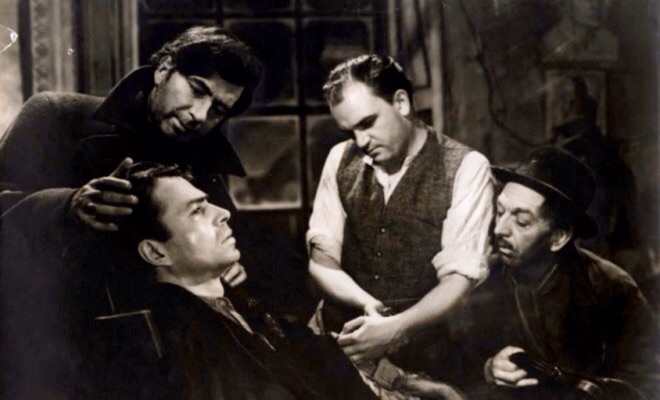 'Odd Man Out' arrives on Blu-ray packaged in a standard Criterion case. A 10-page fold-out booklet featuring an essay by Imogen Sara Smith, cast and crew listings, transfer notes, and a couple of photos is tucked inside the front cover. Video codec is 1080p/AVC MPEG-4 and audio is uncompressed LPCM mono. Once the disc is inserted into the player, the static menu with music immediately pops up; no previews or promos precede it.

Newly restored, this exquisite high-def transfer was created "from a new 35 mm composite fine-grain made from the original nitrate negative," which was provided by the BFI National Archive. Though a few errant specks and marks still litter the image, the overall presentation is beautifully clear and lush. Natural grain levels provide an appropriately gritty texture and wonderful film-like feel, and excellent contrast highlights the gorgeous noir overtones of Robert Krasker's rich cinematography. Deep, inky blacks help set and maintain the desperate mood, and solid gray scale variance enhances details and depth of field. Background elements are easy to discern, shadow delineation is quite good (although a few instances of crush can't be avoided in such a dark film), and close-ups showcase fine facial features, beads of sweat, and stubble quite well. No artificial sharpening or DNR could be detected, and even in the darkest scenes noise is absent and the picture remains stable. With all its dingy interiors and visual effects, 'Odd Man Out' poses myriad challenges, but this glorious effort from Criterion meets them all and will certainly please the film's fans and those who appreciate classic movies.

According to the liner notes, "the original monaural soundtrack was remastered at 24-bit from the 35 mm optical soundtrack positive," and the results are superior. The full-bodied, well-modulated LPCM track features a wide dynamic scale that effortlessly manages highs and lows without flirting with distortion. Atmospherics, such as rain, and sonic accents like footsteps in the mud, gunfire, horse hooves, and engine noise possess plenty of pop. William Alwyn's haunting, melodic score, which benefits from excellent fidelity and flaunts a lovely depth of tone, fills the room with ease, and though some of the dialogue is difficult to comprehend due to the actors' accents, most of the conversations are clear and well prioritized. Best of all, no age-related defects, such as hiss, pops, and crackles, disrupt the mood of this very fine audio rendering.

As usual, Criterion includes a bounty of supplemental material that enhances appreciation of the film. An audio commentary is missing, but that's the only element this comprehensive package lacks.

Carol Reed may be best known for helming 'The Third Man' (and the Oscar-winning musical 'Oliver!'), but 'Odd Man Out' ranks high on the director's list of enduring classics. This taut, inventive, moody post-war film noir may only tangentially address the religious and territorial strife consuming Northern Ireland, but it remains a riveting study of a robbery gone bad and one man's isolation in the aftermath. Memorable characters, a lyrical script, striking direction, and a passionate performance by James Mason distinguish the movie, which still packs a visceral punch more than 65 years after its initial release. Criterion's Blu-ray presentation boasts a spanking new video transfer that outclasses any previous version, robust audio, and an eclectic array of intriguing supplements. Fans of British cinema and film noir will certainly want to pick up this title, which comes highly recommended.

Sale Price 20.26
List Price 39.95
Buy Now
3rd Party 12.95
In Stock.
See what people are saying about this story or others
See Comments in Forum
Previous Next
Pre-Orders
Tomorrow's latest releases