Trouble is cooking for widower and master chef Chu (Sihung Lung) who's about to discover that no matter how dazzling and delicious his culinary creations might be, they're no match for the libidinous whims of his three beautiful but rebellious daughters. A master in the kitchen, Chu is at a loss when it comes to the ingredients of being a father. Every Sunday, he whips up a delicacy of dishes for his ungrateful daughters, who are so self-consumed that they don't see his attempt at showing them love - gastronomically. So, as relationships sour and communications break down, Chu concocts a sure-fire recipe that will bring his family back together: He creates his own love affair to rival his daughters' affections! Starring Sihung Lung, Chien-lien Wu, Yu-Wen Wang, Kuei-Mei Yang, and Sylvia Chang.

Ang Lee's 1994 film 'Eat Drink Man Woman' put the director on the map as a filmmaker capable of pleasing critics and audiences alike. The film was a box office success in Taiwan, but it also made an impact here in the United States, picking up a Best Foreign Language Film Academy Award nomination in the process.

Deeply rooted in the notion of tradition, 'Eat Drink Man Woman' explores the ways in which traditions on the micro and macro level can come to define a family, as much as it does a culture. And how that definition is inevitably forced to change over time. Lee's exploration of tradition focuses on the Chu family, headed up by aging patriarch and brilliant chef Mr. Chu (Sihung Lung), who cooks (overly) elaborate Sunday dinners for his three daughters, Chu Jia-Jen (Kuei-Mei Yang), Chu Jia-Chien (Chien-lien Wu), and Chu Jia-Ning (Yu-Wen Wang), all of whom are unmarried and live at home.

Sunday dinner becomes the anchor point for the film; it is the starting point, from which all of the narrative's threads diverge, and, ultimately, converge, time and again, until the story reaches its quietly beautiful, transformative denouement. Lee goes to great lengths to show the effort Mr. Chu puts into his meals. The skill and the sheer craftsmanship on display are astonishing; a true five-star multi-course meal for his three grown daughters – none of whom seem terribly impressed with his cooking, nor are they overly excited about the prospect of sitting around the table with one another in a week's time.

As much as the film is about tradition, it is also about the ways even the most meaningful rituals can become routine over time, perfunctory. This is seen in the way Mr. Chu cooks his meals. Although they are extravagant, and would require an inordinate level of skill in order for an entire kitchen of chefs to pull of – let alone just one man – there's no real desire behind them; it's all just to maintain a tradition everyone at the table is unaware they're tired of. And to make matters worse, Mr. Chu has lost his sense of taste, and has come to rely on the criticisms of his daughters – mostly Jia-Chien – and Chu's fellow chef, Uncle Wen to know when his technique has gone astray. 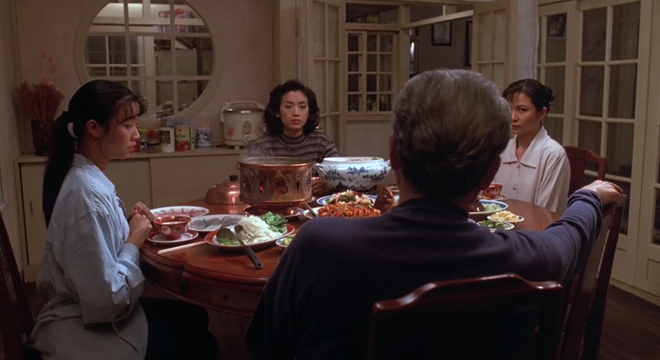 In that sense, 'Eat Drink Man Woman' is as much about passion and sensation, as it is about tradition. Passion drives each of the daughter's plots – and Mr. Chu's as well, though in a circuitous way – as the film follows each woman as she embarks on a new romance. Jia-Ning, the youngest, finds herself getting in the middle of her co-worker's relationship with a young man, inadvertently breaking them up and beginning a hasty romance that leads to dramatic change.

Once Jia-Ning has begun her relationship, the other two sisters are quick to follow, as Jia-Jen, a devoutly religious Christian and schoolteacher, finds herself taken with a star athlete who works at the same school, while Jia-Chien begins a flirtatious relationship with her co-worker Li Kai (Winston Chao), even though she is carrying on a no-strings-attached relationship with a former boyfriend.

While his daughters manage their romantic lives, Mr. Chu spends his time making bento boxes – much to the delight of her classmates – for Shan-Shan (Yu Chien-Tang), the young daughter of a family friend and single mother Liang Jin-Rong (Sylvia Chang). Jin-Rong's mother, Mrs. Liang has recently come to live with her daughter, and, though she is abrasive, loquacious to a fault, and smokes like a chimney, believes herself to be a perfect match for the lonely and available Mr. Chu.

All three relationships are initially centered on where Mr. Chu's daughters work, a fact that becomes significant when Jia-Chien reveals not only that her cooking talent rivals her fathers, but also that she had once dreamed of following in his footsteps. But that was before he pushed her into business. And although Jia-Chien is a successful airline executive facing a major, life-altering promotion, it is clear she left her true passion behind years ago.

It is also significant, as the film seems to suggest that professions can steal away life's passions – even if a person is doing what they love, like Mr. Chu. There is a strong undercurrent that what truly matters in life are the moments that happen between work, the moments that are discovered when family comes together to share hopes and dreams, to deliver plans and let others in on the life-changing experiences that inevitably come, and irrevocably change a family's dynamic, but also sometimes add to it, make it richer and more diverse.

In Lee's deft hand, 'Eat Drink Man Woman' explores the ways in which the microcosm of a single family can act as a sounding board to express the changing social mores and traditions from one generation to another. And as tradition and expectation are sloughed off or revisited, each member of the family begins to find their place in the world again, and re-discovers the passion and sensation they once had or were always denied. Or, perhaps in the case of Mr. Chu and Jia-Chien, they discover new passions that lead to familiar sensations they thought were lost long ago. 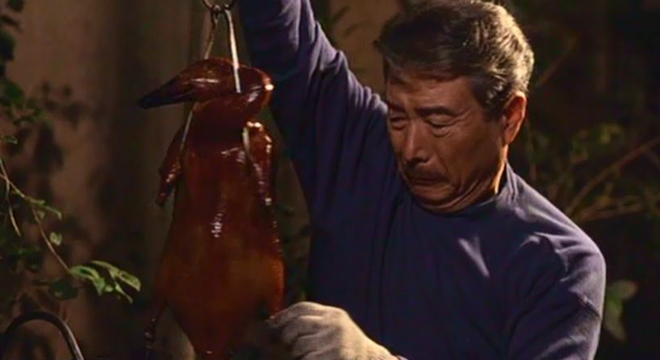 'Eat Drink Man Woman' comes from Olive Films as a single 25GB Blu-ray disc in the standard keepcase. There are no special features on the disc, so the user can jump right into watching the film.

The film is just over 20 years old and the transfer shows how relatively young it is by looking nearly pristine and highly detailed from start to finish. There are a few moments where the detail looks like it's a little off, or it came from a damaged part of the source, and then there are a few scenes where white flecks are noticeable for a fraction of a second, but for the most part, the image looks great.

Close-ups and wide shots feature a nice amount of detail, though the fine detail like facial feature, small hairs, and clothing texture are usually on display during the closer shots. Wide shots feature a good amount of depth, and offer plenty of detail in background elements, which gives the image a superb sense of space and successfully grabs the viewer and sucks them in the very specific setting.

Color is bright and vivid, painting the environment in rich hues that match the decadent meals cooked by Mr. Chu. The film runs with a gray palette that actually works quite well, making bright reds, blues, and greens stand out dramatically. Contrast is also high, as dark shadows run the gamut from light gray to inky, full-bodied black. No crush or banding is detectible anywhere.

Overall, this is a great looking transfer that highlights one of Ang Lee's most subtle, but beautiful films.

The Mandarin DTS-HD Master Audio 2.0 is a serviceable mix that showcases the dialogue, while also handling environmental sound effects quite well.

Voices are all clear and distinct, and they are never overwhelmed by the presence of the film's score or by the bustle of atmospheric effects that are generally present whenever Mr. Chu is in the kitchen. Thankfully, this is a quiet film, one that relies more simplicity of sound design, than it does big, bombastic noises. As such, the audio comes away sounding terrific, even though it's just slightly better than average.

To its credit, the mix does do a nice job handling the balance between dialogue, sound effects, and score, letting each one take center stage at just the right moment. Early on in the film, while Mr. Chu is cooking, there is a splendid balance between effects and score that sets the film off on the right foot, and even though it doesn't offer much more beyond that, it doesn't have to.

This is a good, if not great, sound mix that delivers what it needs to, but doesn't try to offer much more than that.

No special features are included.

Filled with fantastic performances all around, 'Eat Drink Man Woman' is the sort of deeply emotional and poignant film that Ang Lee built his career on. It is the kind of movie that you will want to watch over again, as it is all but guaranteed to show you something you missed the first time through it. This was the third collaboration between Lee and screenwriter James Schamus and even then, it was clear how well the two worked together. This still remains one of Lee's most endearing films, and with this release offering great picture and good sound, it comes recommended.