The Night They Raided Minsky's

Britt Ekland portrays Rachel, a beautiful young Amish woman who leaves her Pennsylvania home and comes to New York City in hopes of becoming a dancer, and ends up doing something quite different: inventing the striptease! Jason Robards gives a wonderful performance as Raymond Paine, the somewhat sleazy star of Minsky's burlesque show, who takes on interest in Rachel's many charms. But his admiration is challenged by Chick Williams (Norman Wisdom), Raymond's comedy partner for the past ten years. And when Rachel's dress is torn accidentally, she plays it up and finds herself the object of even more affection - from the very appreciative audience! The leader of an anti-vice group has everyone arrested, but not before Rachel becomes the toast of the town, in this hilarious - and scandalous - hit! Starring Jason Robards, Britt Ekland, Norman Wisdom, Forrest Tucker, and Harry Andrews.

Before he would make 'The French Connection' and 'The Exorcist,' William Friedkin would make the bawdy musical comedy 'The Night They Raided Minksky's,' with an all-star cast that included Jason Robards, Denholm Elliot, future Bond girl Britt Ekland, and national treasure Elliott Gould. It was an ensemble piece that detailed a single day and night in the lives of the performers of the titular Minsky's – a striptease burlesque in 1925 New York – that took an almost documentary-style approach to the narrative, spending as much time presenting the performances onstage, as it did exploring the hectic backstage world of the theater.

Co-written by 'All in the Family' creator Norma Lear, 'The Night They Raided Minsky's' offers a mishmash of storylines as unruly as the acts being performed for New Yorkers in search of a little indecency in their entertainment. The film is a rare middlebrow examination of lowbrow entertainment that works primarily because of its attention to detail.

Friedkin begins his film with a lengthy opening number that crisscrosses between black-and-white photos of 1920s New York and the wide-eyed wonderment of Rachel Schpitendavel (Ekland), a young Amish girl who has left the farm to pursue her dream of dancing to passages of the bible onstage. The juxtaposition of crowded streets and equally crowded storefronts – with their signage being a major focal point for Friedkin – and Ekland's fresh-faced awe sets the tone of the film almost immediately. And if that doesn't do the trick, the equally lengthy introduction of Minsky's players – namely Jason Robards' Robert Paine and Norman Wisdom's Chick Williams – as they perform a complete number from start to finish certainly will.

That willingness to put the narrative on hold to create a production within a production is something of a double-edged sword. While it demonstrates Friedkin's commitment to setting and place, and his immaculate attention to detail (that would serve him so well later on in his career), it also muddles the focus of the film to the degree that, by the time the performance is over, and the audience is backstage with Paine and Williams, it's unclear whose point of view the film intends to follow. 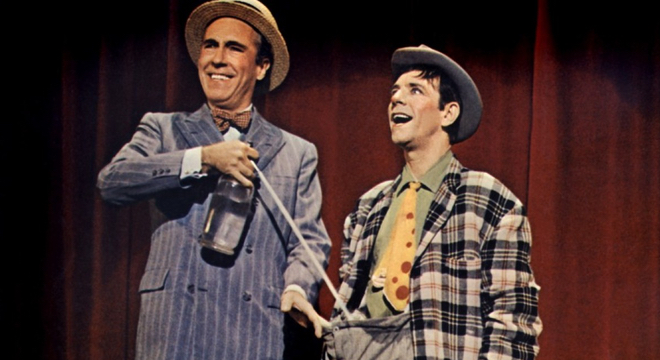 This is an issue that 'The Night They Raided Minsky's' has throughout its brisk 99-minute runtime. Bouncing back and forth from Ekland to Robards and Williams is one thing, but the film also throws in subplots involving Denholm Elliot's moral advocate Vance Fowler, and Elliott Gould as Minsky's proprietor Billy Minksy, whose father refuses to renew the lease on the building for his son. It is clearly an attempt to make the film an ensemble piece, one that mirrors the collaborative effort of the theater in which the story takes place. But this only succeeds in reducing the narrative to a series of too brief snapshots that have no choice but to favor plot over character.

And that's a shame, because with a cast as talented as this, set in a world of entertainment that, even in 1968 felt incredibly distant and fascinating, there is so much about these individuals and their lives worth exploring. Instead, 'The Night They Raided Minsky's' acts like a bullet train en route to an overly predictable ending that boils the film down to two unearned character turns, meant to leave the story on a dual turning point of shifting moralities that hint at the increasingly lascivious nature of entertainment and how sexuality can and will be exploited, even when it crosses the line of legality.

The film isn't interested in moralizing, which is a good thing, but it's also not interested in probing the questions asked by its own narrative – both in terms of examining the nation's problems with its lingering Puritanical mores, and the cheap, "anything for a buck" ethos running in the opposite direction. Much of that has to do with the rather rote thread in which Paine and Williams' find themselves in competition to charm and seduce the ingénue they find in their midst.

That decision to seduce the young woman is the second stage of their grand plan to humiliate Fowler by enticing him to call for a raid after selling Rachel's upcoming performance as a sure-fire bet to cross the lines of decency. Of course, the twist is, Fowler's raid will only find Rachel performing a dance set to a biblical story. There's humor in it, to be sure, but with so much focus on Paine and Williams' burgeoning rivalry over a woman they just met, and the plan to ruin Fowler, too much of who the men really are and what drives them is left unexplored.

The same goes for Rachel, whose one-dimensionality puts her on the run from her oppressive father (Harry Andrews) – who has somehow chased her down to Minsky's – to pursue her childlike dream of making it big in showbiz. Ultimately, the characters, from Robards and Williams, to Ekland, Gould, and Elliot, are all types: men and women who are defined by surface-level things like their jobs. There's an opportunity for rich character development here that the film simply misses.

But that's not to say that 'The Night They Raided Minsky's' is without its attributes. The onstage performances by Robards and Williams are incredibly well done. Both men bring naturalism to the difficult task of putting on a performance within a performance that genuinely sells the film's sense of both time and place. In this instance, Minsky's is more than a place for the narrative to unfold; it is a living, breathing entity that is home to this semi-wretched lot. And Friedkin, for his efforts, succeeds in making the theater feel real and lived-in.

The surprising dimensionality of the setting may not entirely make up for the thin characters on display, but it does give the film something meaty to sink its teeth into. The script is more interested in wringing laughs from the preposterously prudish nature of the world outside the burlesque – which is exemplified in Rachel's unintentionally provocative show stopper during the film's climax – and to a certain degree there is plenty of entertainment to be had there. But there is something far more interesting lurking below the surface that is never quite explored; motivations and thoughts that are left uncharted in favor of an unbelievable romance that becomes too weighty and significant too quickly for the ending to pack the punch that it so clearly wants to. 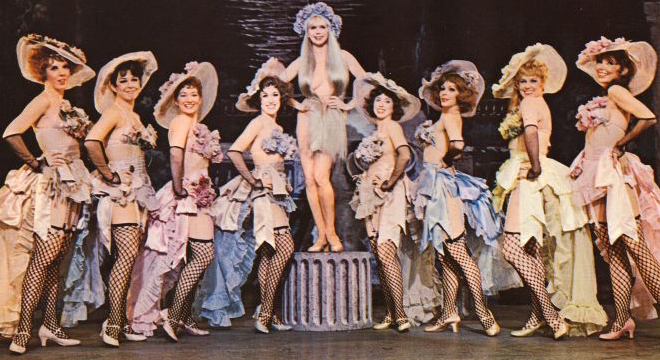 'The Night They Raided Minsky's' comes from Olive Films as a single 25GB Blu-ray disc in the standard keepcase. There are no previews ahead of the top menu, so the user can either access the film's trailer, or go straight to the film itself.

'The Night They Raided Minsky's' boasts an impressive transfer that breathes new life into this film, giving it enhanced detail and bright, vivid colors, while reducing grain and artifacts significantly.

The image is surprisingly packed with fine detail that showcases plenty of facial features and clothing textures. The costumes of the various burlesque performers are oftentimes the highlight of any give scene, and they typically look great here. In addition, the shots of downtown Manhattan look terrific, offering plenty of detail and terrific depth of field. Contrast is high throughout, as the darkened theater still offers plenty of fine detail, without an increase in the grain. Blacks are full-bodied, while white balance keeps the film from ever looking blown out. Color is bright, paying particular attention to reds, which really pop onscreen.

Despite the film's age, this is one impressive transfer that only slips with a few instances where perhaps the source wasn't as good as it could have been. Otherwise, this disc looks great.

The DTS-HD Master Audio 1.0 mix is fine, but unremarkable. There are times when the balance seems to be a bit off, but for the most part, the audio delivers crisp dialogue and even manages to impress with its presentation of the film's various musical numbers.

There is a lot of audio packed into certain scenes, and the result is occasionally a slightly muddled delivery, where the sounds of the theater audience sometimes overwhelm the focus that's meant to be for those onstage. This is most apparent during the film's raucous finale, when the bawdy orchestral music is mixed with the lascivious cries from the audience, egging Ekland's character on. It works to a certain degree, selling the chaotic intensity of the moment, but the pitch of some of the voices undercuts the efficacy of the audio.

Still, the track does it's best to handle things like ambient noise, music, and dialogue, and, for the most part, it succeeds. It just won't wow anyone who's listening.

'The Night They Raided Minsky's' is a fun film that allows itself to be as bawdy as its subject matter. And while that is entertaining for the most part, the script's surface-level attention to its characters leaves them and the story feeling one-dimensional. Terrific actors like Elliott Gould and Jason Robards are given little to go on, and their threads feel mostly interested in getting to the ending hinted at in the film's title. Still, with great picture and decent sound, this one is worth a look.

Sale Price 16.21
Buy Now
3rd Party 56.49
In Stock.
See what people are saying about this story or others
See Comments in Forum
Previous Next
Pre-Orders
Tomorrow's latest releases