Overview - Aeon Flux is a mysterious assassin working for the Monicans, a group of rebels trying to overthrow the government. When she is a sent on a mission to kill the Chairman, a whole new mystery is found.
OVERALL
Give It a Rent 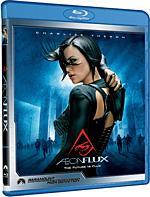 Based on the successful MTV computer animated series of the same name, 'Aeon Flux' is another one of those big-screen adaptations of a cult phenomenon that failed to ignite with mass audiences. Like the recent 'V for Vendetta,' 'A Scanner Darkly,' 'Hellboy' and 'Serenity,' it disappointed at the box office, proving that just because the fan boys flock to a property on the small screen or in a comic book doesn't mean they'll pay to see it on the big screen. Or maybe, like so many of its ilk, 'Aeon Flux' just didn't get it quite right. While the original MTV series was, in its own way, edgy and pioneering, 'Aeon Flux' on the big screen is glossy and sanitized, its rough edges sanded down (intentionally or not) by an A-list cast and a squeaky-clean visual look that fails to capture the spirit of the source material.

Which is too bad, since 'Aeon Flux' actually has a somewhat intriguing premise. The year is 2415. It has been over 400 years since 99 percent of the human race was wiped out by a deadly virus. Earth's remaining survivors have retreated to Bregna, a walled-in, Zen-like paradise. But as the centuries wore on, Bregna began to slip under the control of a government led by the Goodchild clan, including patriarch Trevor (Marton Csokas) and son Oren (Jonny Lee Miller), who are growing increasingly dictatorial. Soon an outlaw group of rebels, the Monicans, forms to overthrow the theocracy. Aeon Flux (Charlize Theron) is the Monican's top infiltrator, who with her genetically-enhanced extra-sensory powers, is assigned to assassinate the the Goodchilds. But Aeon soon discovers that the government's deception and treachery runs far deeper than even the Monicans could have imagined.

Granted, the above plot synopsis could have been cobbled together from a dozen other, better sci-fi movies. It pulls freely, both thematically and visually, from classics like '1984,' 'Blade Runner,' 'Equilibrium' and even last year's underrated mega-flop 'The Island' (a film I persist in admiring, even though I hate everything else Michael Bay has ever done). Maybe that's the problem with 'Aeon Flux,' and why audiences avoided the flick in droves -- after such genre-bending hits like 'The Matrix' and 'Sin City,' and even more pedestrian videogame "reimaginings" like 'Tomb Raider' and 'Resident Evil,' 'Aeon Flux' just seemed like too little, too late. There is nothing particularly wrong with the film, its story or admittedly flashy visual panache, yet somehow it just doesn't come together to form a cohesive whole that really resonates.

I know it is a tired old cliche to say, but 'Aeon Flux' also suffers because it places style far above substance. Theron is of course a great actress -- she did win a much-deserved Oscar for her transformative performance in 'Monster' -- but Aeon is a poorly-developed character, and given so much plot twists to uncover and action setpieces to complete, that Theron isn't allowed to bring her inner emotional world to life. The supporting players are also all lost amid the fantastical production design. Yes, 'Aeon Flux' is a fabulous-looking movie, and it is a sheer joy just to look at it. But the old adage still holds true -- all the gorgeous production design and cool action scenes mean squat if you don't care about the characters.

Still, 'Aeon Flux' might be worth seeing if you are a diehard sci-fi or videogame fan -- it certainly delivers when it comes to wildly imaginative visuals and suspenseful action scenes. And it does touch upon some universal themes that a lesser film wouldn't even have bothered to suggest at all. Paradise may be nice, but is it worth the cost of losing our shared humanity? Where must government draw the line between the autonomy of its citizens and the good of the greater community? Is rebellion sometimes the only solution, no matter what the cost? Perhaps, had 'Aeon Flux' tackled these intriguing themes in more than PG-13 way, it might have had more of a lasting impact. And certainly, this is hardly a "dumb" movie. So if you can lower your expectations and have a great home theater rig, 'Aeon Flux' is still a fun, perfectly harmless way to kill 92 minutes. 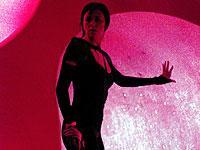 I was really quite impressed with the HD DVD release of 'Aeon Flux,' which I gave high marks for its video transfer. However marginal the film itself may be, its cinematography and effects are nothing short of spectacular. Such over-the-top visuals are tailor-made for high-def, though this Blu-ray is a narrow step down from its HD DVD counterpart. Both are minted from the same master and presented in 2.35:1 widescreen and 1080p video, though Paramount has gone with MPEG-2 here, instead of VC-1.

It most respects, it is hard to imagine a consumer-grade video transfer looking any better than this. Though there is no "source print" to speak of, as this is a digital-to-digital transfer, wherever it came from it looks pristine. Blacks are dead-on, and both sharpness and contrast superb. Resulting detail is luxurious, with a sense of depth and three-dimensionality to the image that certainly does high-def proud. Colors are also incredibly vivid and vibrant, yet smooth and free of noise -- they are so good, in fact, that they look unreal. I was also impressed with the consistency of the transfer -- scene after scene just looked great, both daylight exteriors (er, at least of the CGI variety) as well as dark interiors. Pretty fantastic stuff.

However, I was a bit distracted while watching the Blu-ray by more consistently noticeable artifacts. In particular, posterization was more troublesome. Dissolves and large gradations of color often looked a bit more artificial than the HD DVD. I also noticed a slight increase in video noise in the darker scenes. Hardly excessive, and the difference is nowhere near night and day. I'm not sure if this has to do with the fact that the Blu-ray had to be squeezed into a tighter space (a BD-25 25GB single-layer versus an HD-30 30GB dual-layer disc), but the HD DVD version just looked slightly cleaner.

Paramount gives 'Aeon Flux' a Dolby Digital 5.1 surround track, and the film is nothing if not aggressive in its sound design. 'Aeon Flux' boasts the kind of sonic zip you expect for a big-budget, modern sci-fi extravaganza, and this Blu-ray delivers the goods despite a couple of minor quibbles.

Like its surreal visuals, 'Aeon Flux' has a pretty wacky soundtrack. Effects often whiz by, but not just as simple pans from front to back from right to left, but often from speaker to speaker in a zig-zag pattern. There are also some instances of dialogue and atmospheric noises placed in the rears, which adds ambiance. However, as I lamented in my HD DVD review of the film, I did wish the mix was a bit less sporadic -- while most scenes feature at least some sense of envelopment, curiously at times a whole sequence will go by which is entirely front-directed. Weird. Otherwise, all technical aspects of this soundtrack are class-A, including great dynamic range with a sense of depth and presence across the entire spectrum and powerful low bass. Aside from a caveat or two, 'Aeon Flux' sounds almost as good as it looks. 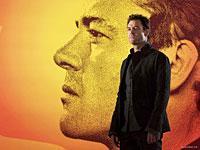 Paramount has ported over all of the extras from the standard DVD release of 'Aeon Flux' for the Blu-ray. Though nothing here reinvents the wheel, it is a fairly decent package of supplements and certainly one that doesn't lack for a sheer volume of information.

Not one but two audio commentaries are included, the first with producer Gale Anne Hurd and star Charlize Theron, and the second with screenwriters Phil Hay and Matt Manfredi. Unfortunately, both tracks were recorded before the movie debuted and subsequently bombed in theaters. Not that you would know it by Gale and Theron, who are almost rhapsodic in their gushing praise of every aspect of the movie -- in their eyes, 'Aeon Flux' appears to be nothing less than the greatest sci-fi masterpiece of all time. To be fair, the two do share a wealth (almost to a fault) of production stories, from shooting in Berlin to the film's rigorous stunts to Theron's much-publicized injury halfway through filming when she nearly broke her foot. By contrast, Hay and Manfredi at least attempt to dissect the film's themes and characters. But again, a look underneath 'Aeon Flux's admittedly beautiful hood reveals little of substance is actually going on. Two hours of Hurd and Theron was enough of a struggle to get through -- another two hours of overly-fawning, pretentious gobbledygook was clearly too much.

Up next is a series of five featurettes that really is one 45-minute documentary, just broken up into a bunch of little parts: "Creating a World" (aka "This ain't your big brother's cartoon"), "The Locations" (aka "It's cheap to shoot in Berlin"), "The Stunts" (aka "Charlize kicks ass"), "The Costume Design Workshop" (aka "Charlize is really pretty, too") and "The Craft of the Set Photographer" (aka "We're really desperate for some filler"). On the plus side, none of these featurettes makes the mistake of focusing on silly things like "character" and "story" and "meaning" (save perhaps for "Creating a World," which does give a little face time to the screenwriters to talk about their "standalone" concept for the film); instead, the majority of this material is all about the visuals and the action. Yes, it is overly technical, but after seeing all the work that went into creating what everyone hoped would be a multi-million dollar blockbuster, it actually becomes a bit poignant after awhile -- it's easy to forget in this day and age of weekend box office number bean-counting that real careers are at stake when a movie this expensive flops. Ouch.

Rounding out the extras is the film's theatrical trailer presented in full 1080p video.

'Aeon Flux' is a fairly forgettable sci-fi thriller, and already one of the more lambasted big-budget flops in recent memory. I can't say it improves much on video, but you diehard videogame fans might still like it. As for this Blu-ray release, it compares favorably to its HD DVD counterpart in all respects, though the transfer is a bit more plagued by some minor artifacts. All in all, though, worth a look if you're into these kinds of flicks or just want to see Charlize Theron in black spandex.