The gritty adaption of William Shakespeare's play about the English King's bloody conquest of France.

Just in case there are any doubters out there, the history play Henry V is evidence enough William Shakespeare was an extraordinary literary genius, radical and innovative, fortunate to be appreciated even during his own lifetime. The 1989 film adaptation from Kenneth Branagh not only knows this to be true but even embraces the very theme which demonstrates the play is a brilliant masterpiece of literature. The plot's excellence and distinction resides in the prologue speech delivered by Chorus, a part wisely given to the talented Derek Jacobi dressed in modern attire and walking through a film studio so as to make the point clearer to contemporary moviegoers. This break in the fourth wall is like Shakespeare admitting to the challenges and limitations of bringing history to the stage — or the silver screen — that it could never do justice to the reality. Nonetheless, the creators — or the filmmakers — attempting to reenact a true account of national pride humbly ask viewers to suspend their disbelief and allow their imaginations to make it real for a short while.

Marking his debut as writer and director, Branagh understands the importance of the speech, which is not much of a surprise given his career began in the theatre, for accurately reflecting this central theme. The filmmaking process also suffers from the same challenges and limitations of portraying history precisely and authentically. Underscoring this is the fact that we don't attend plays or watch movies for a history lesson — it's a very sad case when some people actually do or when others ridiculously dispute and disparage a movie for not telling the whole truth. 'American Sniper' and 'Selma' are only a couple recent examples. Anyhow, the point is we want to be entertained, to be taken away from the dreariness of our boring, routine lives, to be wowed by something larger than life. If Spielberg's 'Lincoln' recounted every detail in the life of an admired historical figure, it would not be a movie anyone would pay money for. Unless it was a televised series on PBS or, God help us, The History Channel where it would probably try to prove that aliens did it all along.

In the prologue, Shakespeare essentially addresses this issue, which is incredibly clever and intuitive to do over four hundred years ago, and Branagh boldly rejoices in this ingenious beginning as Jacobi pushes the doors open commencing the action. We don't want reality. We want drama and action and because of that, we are asked to simply delight in what the imagination can conjure. It's a bit of irony that in the attempt to honor the distinguished notoriety and accomplishments of a real person, a historical figure the public might view as a remarkable hero, it is told a dramatic piece of fiction. The great Bard of Avon acknowledging this at the time he did is evidence of his virtuoso talent. Moreover, his immense influence on modernity can also be summed up as the creator of a story franchise, of capitalizing on the popularity of an earlier established work. The play is the fourth installment in a series showcasing the British royal lineage, something we would refer to as a "quadrilogy" today, so late 16th Century audiences would be very familiar with the story's hero because they've seen him grow up as Prince Hal in the plays Henry IV Part 1 & 2. 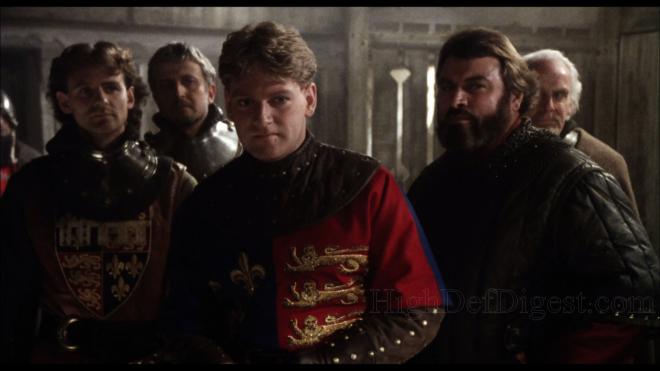 For the film, Branagh makes the safe assumption that most moviegoers are at a disadvantage when it comes the life and times of the great king who defeated the superior French army at the deadly Battle of Agincourt. So, he inserts several flashback sequences of Henry, played by Branagh himself, when he was a rebellious young Prince spending much of his time with ne'er-do-well commoners and Sir John Falstaff (Robbie Coltrane) at the Boar's-Head Tavern. Branagh does this not only to acclimate contemporary audiences with necessary exposition, but he does this also to better establish his own central theme when translating the classic play for the silver screen. The future director of 'Thor' and 'Cinderella (2015)' removed much of the smaller comedic moments, particularly those involving the antics of Pistol (Robert Stephens) and Nym (Geoffrey Hutchings). He instead tells the story strictly as a drama with attention on the horrors and effects of war, as well as the taxing challenges of becoming a King, such as when faced with sentencing to death a former friend from his youth, Bardolph (Richard Briers), for looting a church.

At the time, the young Kenneth Branagh was a relatively unknown talent, recognized more for his work on the stage and several appearances on television. With 'Henry V,' he made one of the most impressive motion picture debuts, earning him worldwide acclaim and several award nominations for his both work in a leading role and as director. And to this day, his camerawork remains as striking and notable as ever, working carefully with cinematographer Kenneth MacMillan ('Of Mice and Men (1992)') to create a brooding, grave look at hand-to-hand combat. The final four-minute tracking shot across the battlefield as the music of Patrick Doyle swells to a tearful crescendo is engraved to memory. Prior to that, Branagh's reading of the famous "St. Crispin's Day Speech" is a rousing and inspiring moment that reminds moviegoers of Shakespeare's continued influence on the now somewhat clichéd scene where a film's hero delivers a grandiose speech to encourage the troops into battle. When it's all said and done, Kenneth Branagh's 'Henry V' remains one of the best film adaptations of most any William Shakespeare play.

Shout! Factory brings 'Henry V' to Blu-ray on a Region A locked, BD25 disc inside the standard blue keepcase. At startup, viewers are taken to a static menu screen with the usual options and music.

The not-so-young-anymore Prince Hal wages war upon the battlegrounds of Blu-ray with an average-looking and somewhat disappointing presentation. Admittedly, this is an improvement over previous home video editions, but sadly, this 1080p/AVC MPEG-4 encode seems to have been made from a badly aged source, possibly the same one used for the 2000 MGM DVD because they look fairly similar. Other than the usual spattering of dirt, white specks and the occasional minor scratches, the video also suffers from poor resolution, some very mild banding and flat contrast levels, creating a bit of posterization and blooming in the highlights. Much of the picture is soft and blurry with only a couple moments of good definition. Blacks are strong and accurate, but the darkest portions tend to obscure the finer details. The color palette benefits the most with pleasing, bold primaries, but since the elements show the yellowish tint that comes from age, the 1.85:1 image fails to every impressive and could greatly improve with a full restoration.

Amazingly, as well as fortunately, one of the very best Shakespeare adaptations ever arrives with a great DTS-HD MA stereo soundtrack.

Imaging feels broad and expansive with excellent balance between the channels and delivering plenty of convincing off-screen effects. Creating a wide wall of sound, the soundstage exhibits clean separation between the various frequencies, allowing each ringing clang of swords and every scream during battle to be perfectly heard without fail. The score spreads evenly across the screen with distinct clarity and fidelity of every instrument in the orchestra. Bass doesn't really impress much — given the film's final musical piece, it should probably be stronger — but it's adequate with a good palpable feel during a few key scenes. Dialogue is precise and very well-prioritized in the center, making each emotive scene and conversation all the more powerful and poignant.

Marking his big screen as a male lead, screenwriter and director, Kenneth Branagh stunned audiences with his remarkable, cinematic adaptation of William Shakespeare's 'Henry V.' The film perfectly captures the brilliance of the play while celebrating the Bard's literary genius with magnificent performances and outstanding camerawork. The Blu-ray from Shout Factory arrives with disappointing video that sadly doesn't offer much of a jump to it DVD counterpart, but the audio presentation definitely benefits from the move to high-def. Lacking terribly in the supplements department, the bare-bones release will likely only attract hardened fans and Shakespeare devotees.

Sale Price 14.99
List Price 24.97
Buy Now
3rd Party 10.25
In Stock.
See what people are saying about this story or others
See Comments in Forum
Previous Next
Pre-Orders
Tomorrow's latest releases