A greedy landowner and his backward nephew conspire to block the only water source for an adjoining property in order to bankrupt the owner and force him to sell.

A beautiful but shy shepherdess plots vengeance on the men whose greedy conspiracy to acquire her her father's land caused his death years earlier.

In 1986, 'Jean de Florette' and 'Manon of the Spring' were, at the time, the most expensive French film(s) ever made. Based on the novel by Marcel Pagnol and directed by Claude Berri, the films told the broad, sweeping tale of greed, death, and ultimately, heartrending, poetic justice. What's unique about both films is that, despite being two halves of one grand epic, they both work as self-contained movies. The viewer doesn't necessarily have to watch both in order to understand what's going on – a feature that is likely more impressive for 'Manon,' but nonetheless is still an example of Berri's strength in composing two inexorably linked yet impressively distinct films.

The tale begins just after the First World War, as a young man named Ugolin (Daniel Auteuil) returns to his familial home in Provence to live and work the land with his only surviving relative, his wealthy, lineage-obsessed uncle, Cesar Soubeyran (Yves Montand). Ugolin's post-war plans include using his plot of land to grow carnations, which he soon finds he can sell for a handsome profit. The only problem is, in this rural area of Provence, water is not easy to come by, and Ugolin's plot of land has only a single cistern that cannot possibly hope to keep rows and rows of carnations hydrated.

It doesn't take long for the patriarchal Cesar to suggest they purchase a nearby plot from a cranky olive farmer, to make use of the natural spring running just beneath the surface of his land. The meeting to negotiate a price for the land turns confrontational, leaving the other farmer dead. Cesar and Ugolin cover up their crime and, to make the land seem undesirable to whoever inherits it, they plug the spring with concrete, figuring it will be just a matter of time before the new owner sells and they can get the land on the cheap.

As it turns out, the inheritor is city-dwelling hunchback Jean Cadoret (Gerard Depardieu), who brings his wife and young daughter Manon to the bucolic countryside with the hopes of creating a new life for himself and his family. Jean is idealistic and hardworking, slaving away through the hot summer months, trudging up and down a steep path to lug liters and liters of water for his crops and the rabbits he hopes to create a thriving livelihood from. 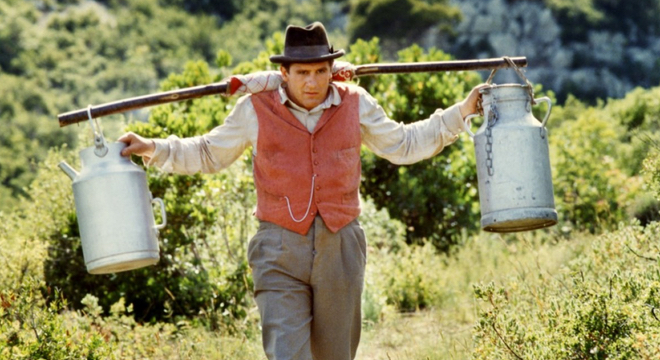 At the same time, Cesar's plan is to have Ugolin befriend the hunchback, while simultaneously turning the village people against him, painting Cadoret as an outcast and a threat to the insular community. The idea being that, when Jean ultimately fails – due to the lack of water and general animosity of his neighbors – he will undoubtedly sell to his only friend, Ugolin.

Berri uses his actors and the landscape to create a sense of tragic inevitability that revolves as much around Depardieu's ability to balance naïve optimism and despair, as it does around Montand's capacity to project heartless greed and ambition without devolving into a cackling caricature of the classic movie villain. Meanwhile, Auteuil delivers a performance that is somewhere in between, a naïve young man, driven as much by a desire to succeed as he is by the innate goodness that briefly causes him to question the unethical treatment of a man who desperately needs his help.

Though it teeters on the edge of melodrama at times – especially when the family's cistern runs dry and Jean's wife nearly collapses in her husband's arms – Berri manages to keep 'Jean de Florettte' from taking the plunge completely, by underlining the tragic nature of avarice. Through it all, the performances by the three leads maintain a steady level of nuance that accentuates the heartbreaking sense of fate running beneath the narrative's surface, like the spring that goes undiscovered by Jean.

And knowing that his salvation is literally underfoot the whole time, concealed by men who had no reason to hate or fear him, takes a simple tale of misfortune and augments it to full-on tragedy, which turns 'Manon of the Spring' into the second part of a multi-generational epic about balancing the scales and poetic retribution.

Picking up 10 years from where 'Jean de Florette' leaves off, 'Manon of the Spring' follows the now teenaged daughter of Jean Cadoret, who still lives in Provence and works as a goat herder, spending her days wandering the hills, playing her father's harmonica, and generally making everyone who comes in contact with her wild with desire. Played by a fresh-faced Emmanuell Béart, Manon comes dangerously close to becoming a mere type: the waifish ingénue capable of charming any man with her mere presence (and especially those who stumble upon her bathing), but Béart manages to compose a character who is at once naïve and optimistic like her father, and filled with anger and resentment towards the Soubeyrans and the villagers who did nothing to help her father when he was in need.

Unsurprisingly, Manon remains something of an outsider, the young girl of "the hunchback," who is spotted sometimes by the locals. It is unclear at first the lengths of Manon's understanding of what happened to her father, much less how she feels about it. Béart lets her magnificently large and expressive eyes do most of the talking for much of the first half of the film. It is only when she makes the acquaintance of Bernard, a kindly and attractive young schoolteacher played by Hippolyte Girardot, that Berri begins to explore who Manon is and what drives her.

At the same time, Ugolin and his uncle Cesar are enjoying the fruits of their wicked labors. Successful and flourishing from their carnation trade, the two have everything but love and a family. As the patriarch of the rapidly diminishing Soubeyran clan, Cesar implores his nephew to find a wife, marry, and make little Soubeyrans, to inherit and continue their proud, deceitful line. And, as fate would have it, Ugolin finds himself infatuated with the daughter of the man he helped ruin.

There is a strong undercurrent of retribution running through 'Manon of the Spring,' but this is no Charles Bronson picture. Instead, Berri uses the righting of wrongs to transform the two separate films into one grand, sweeping epic of tragedy and justice. While the film follows the maturation of Manon, it is Cesar's arc that makes the entire story come full circle, as he goes from greedy malcontent to a man stricken by a revelation so profound it is as if fate is laughing at him. And again, were it not for Berri's measured approach, the melodrama inherent in the narrative would have become an overwhelmingly sentimental experience, undercutting the expression of grief and retribution that makes this nearly four-hour epic such a fulfilling journey. 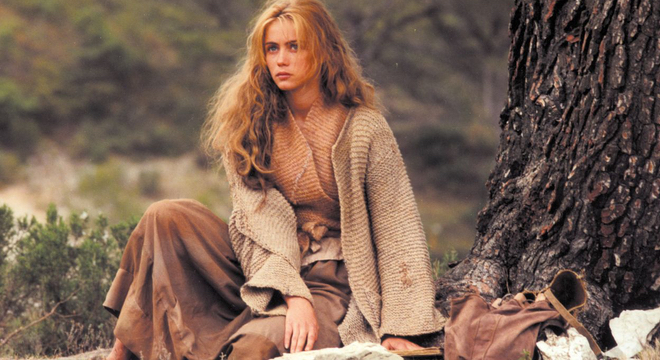 'Jean de Florette / Manon of the Spring' comes from Shout! Factory as two 50GB Blu-ray discs inside the standard two-disc keepcase. The insert features somewhat tacky cover art, depicting both film's posters – in the manner of the Blu-ray value packs you see in five-dollar bins – but the insert's reverse side offers a different image that can be swapped out. There are no previews or special features on either disc aside from the theatrical trailers.

Both films are approaching the 30-year mark, and although that's not really that old, there are times when the age of the film is apparent. 'Jean de Florette' starts off with a sequence following Ugolin on his journey home, and the quality of the picture leave a lot to be desired. It is grainy, with limited fine detail and the color is somewhat muted.

But that sequence goes by quickly, and although it's not the best first impression that a film can make, the rest of the disc (as well as the second film) offer such a nice, full-bodied picture, it's worth it to give the disc a second chance at that first impression. Scenes are generally filled with a bright, detailed picture that makes the most of Berri's love of close-ups as well as the vast countryside in which the films are set. Fine detail is present in nearly every scene – though the extent to which it appears generally depends on the depth of field and how close to the person or object the camera is placed. Still, facial features and textural elements look good throughout and sometimes even great.

Color and contrast also play a big part in the overall quality of the transfer. Color is big, bright, and beautiful, making the most of the golden hues that Berri uses to make Provence look as palatial and heavenly as possible, painting a sumptuous picture while simultaneously creating a powerful contradiction between the gorgeous vistas and the torment of both Jean and Manon. Contrast is high throughout, maintaining a measured white balance that never looks blown out or too hot, even in the heat of the French summer. Darkness is conveyed through deep, rich shadows that run from gray to inky black without a trace of banding or crush. The image does not lose a hint of detail in darker moments, making this a very nice image that simply got off to a rocky start.

Both films have been fitted with surprisingly nice DTS-HD Master Audio 5.1 mixes, giving the films rich-sounding audio that highlights the dialogue, but also generates a convincing and immersive atmosphere that is alive with ambient sounds and the films' beautiful score.

Both discs are front-loaded. Therefore, most of the sound comes through the center and front right and left speakers. The center channel delivers robust dialogue that is always crystal clear, but the front channels will occasionally pick up another voice, to create a sense of depth and directionality. Rear channels consistently deliver ambient sound and other atmospheric elements to create a well-balanced immersive listening experience.

Most impressive, though, are the times when the film's score is allowed to get big and expressive, using the full range of the channels at its disposal, and even bringing a little LFE in at times. Though powerful, the discs always maintain a fantastic balance that allows other elements to still come through, and work with – not against – the film's desire to let the score take center stage.

Overall, this is a very nice sounding set of discs that will please fans of the film and first-time viewers alike.

'Jean de Florette' and 'Manon of the Spring' are a pair of films that, when combined create a sweeping, multigenerational epic about morality, fate, and justice. What's remarkable is how the films can exist on their own, telling complete stories that don't require the other in order to make sense. It is only when the two are viewed together – ideally back-to-back – that the grandness of the narrative comes into view and is given a chance to come full circle. Although some supplements would be nice, the image and sound of these discs, combined with the fact that Shout! Factory has packaged them together, makes this double-bill recommended.