Co-written by Robert Hall and Aaron Drane, the film is based on the critically acclaimed and fan favorite 2009 FEARnet.com series. When trauma-induced phobias begin to re-emerge in five survivors a year after their horrifying tragedy, they return to the "Fear Clinic," hoping to find the answers they need to get cured.

Dr. Andover (Robert Englund), a fear doctor who runs the clinic, uses his "Fear Chamber" to animate their fears in the form of terrifying hallucinations. However, the good doctor soon begins to suspect that something more sinister may be at work, something that yearns to be more than just an hallucination...

Everyone has a fear, some irrational terror that drives them to stay safe all their lives or take extreme risks in order to conquer their fears. I myself have a fear of falling. If I climb up a simple step stool and look down, I get the sense that my feet are about to slip out from under me at any moment and I’ll break my foot or something horrible. I had a college roommate who was terrified of spiders - so I periodically send him pictures of tarantulas on Facebook. Your fears can empower, embolden, or out right make you laugh your head off if you give yourself over to the absurdity. But if you can’t do that, they can be a source of misery and make for fantastic horror movie fodder. At least that’s what ‘Fear Clinic’ seems to strive for, but it doesn’t quite know how to make fear a terrifying experience on screen.

'Fear Clinic’ stars the iconic Robert Englund (A Nightmare on Elm Street) as brilliant Dr. Andover who has created a revolutionary means to “cure” people of their crippling phobias. While situated in a coffin-like chamber, patients undergo a form of extreme sensory depravation as the good Dr. Andover guides them through their fears, forcing them to hallucinate the events and then guide them out enabling them to realize that whatever they’re afraid of is all in their mind and not something to fear any more. Sounds like a  great plan, until for some strange reason, things start going very, very wrong.

During a session with a woman who has survived a mass shooting, Dr. Andover loses his patient to a darker unseen force. Rather than following his voice out of the darkness, another voice, a more powerful presence forces her deeper into her fears leaving her in a catatonic state staring lifelessly into the void as her eyes fill with blackness. This experience cripples the good doctor and forces him to close the clinic out of fear of something going wrong for other patients. The only problem now is that other “cured” survivors of the same shooting that Andover also treated are having relapses back into their fears and the only means to help them is to risk putting them back in the chamber at the risk exposing them to this force that doesn’t want to simply be a hallucination any longer. 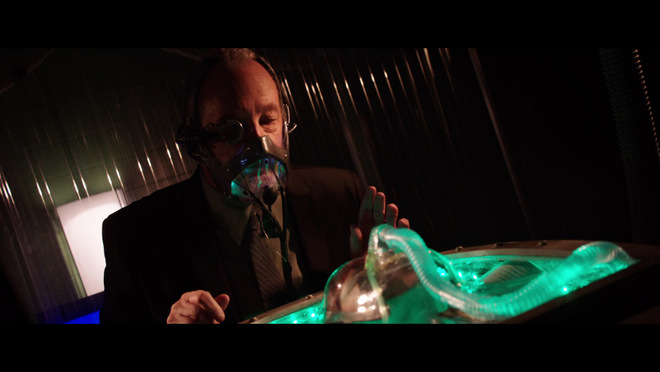 That sounds like a fantastic premise for a horror movie. Unfortunately - the way ‘Fear Clinic’ unfolds is a convoluted mess. It’s never clear what’s going on or what the motivations are for any particular person. Did the patients that Andover is trying to save already have their extreme phobias or are they a result of the shooting? Never really explained; you’re left to guess what is going on and connect the dots for yourself. That normally isn’t much of a problem for a horror movie, but in this case, a little understanding, or some basic set up would have gone a long way towards resolving a lot of the story issues and then make the situations people are experiencing that much more terrifying. As it stands, it never really feels like anyone has anything to risk and therefor the audience doesn’t have anything to fear. It’s also a missed opportunity that we never really see what these people are genuinely afraid of. One character is afraid of the dark, another is afraid of insects, another is claustrophobic, but these fears are never really explored or exploited as they could have been for a horror film.

‘Fear Clinic’ is a movie that feels like it’s stumbling from one cool idea to the next only without taking any time to draw any connecting tissue to make it interesting or exciting - instead it comes off as confusing and at times outright silly. Part of the problem could be that this movie was originally a popular webseries that got expanded into a feature film. It probably works much better in smaller installments and extended over a longer period of time. And that’s the real shame here. This movie has better than average production values, an interesting premise, and some pretty decent creature effects for the final “Fear Monster” provided by the legendary Robert Kurtzman. On top of all these marks in the plus column is a pretty fantastic cast. Fiona Dourif’s damaged but determined Sara is believable and provides a strong motivating anchor for the film. Thomas Dekker as the mysterious invalid Blake is an interesting character to see unfold. Then there is the big man himself, Robert Englund. While always reliable, here Englund delivers one of his best performances in years since he’s not required to camp it up behind pounds of makeup nor is he regulated to simple stunt casting.

With all of these highlights, all of these things working for the film, it’s a shame the movie just isn't scary. Maybe another pass at the script, maybe a more relaxed pace at the front end to introduce the characters properly would have helped the final outcome; but that’s hard to say. Where this movie ends up on the list of low budget horror movies is something that is better than average, but ultimately not that special. It’s worth a look for die hard horror fans, but if the genre doesn’t really get you excited, there isn’t a lot to recommend.

‘Fear Clinic’ comes to us by way of Anchor Bay in a standard eco-keep case. The BD25 disc is region A locked and is a Best Buy Exclusive release through May 11th.

‘Fear Clinic’ comes our way in a stellar 1080p 2.40:1 presentation. Considering the lack of extras on the disc, the picture has a lot of real estate to live on. Shot digitally, there are few if any compression issues to speak of other than some slight banding that’s barely noticeable. For a dark and shadowy movie, black levels are nice and inky and rarely give way to any crush issues. Colors are also given plenty of room to pop on the screen, particularly blues and greens. Flesh tones are also equally nice. It’s a moody film so people are expected to look pale and not too pink or healthy. Detail is spectacular, particularly in Dr. Andover’s fear chamber, there’s a lot of lights and wiring to take in and nothing feels lost.

Like any good horror movie, ‘Fear Clinic’ is improved with a fantastic audio presentation. This disc features a solid English Dolby TrueHD 5.1 track. There is plenty of dimension and imaging around the channels that really helps bring home the unsettling nature of the movie. It’s also a movie that appreciates the quiet moments and lets those scenes live with subtle sound effects and a score by Jason M. Hall that has nice lingering base notes that fill the dead air. Levels are also natural and even, punctuated with loud bursts to help ramp up the action. For a dialog heavy movie, understanding what characters are saying is never an issue here.

Fear Clinic: Behind The Scenes (11:51 HD) - Interview with cast and crew that explains the history of the project as a web series and it’s transition to a full length feature film. This is interesting but it would have been great to have also had the web series on the disc as well since it works as a prologue of sorts to the film.

I love horror movies so I’m always eager and excited to see something new and different. ‘Fear Clinic’ is a movie that conceptually is a good movie but the final product doesn’t make the grade. Glaring story structure issues bring down the efforts of a great cast, creepy cinematography, and this disc’s stellar video and audio presentation. It’s worth a look but only for the genre loyal.

Sale Price 14.88
Buy Now
3rd Party 11.97
In Stock.
See what people are saying about this story or others
See Comments in Forum
Previous Next
Pre-Orders
Tomorrow's latest releases