Lurk what's waiting for the Monster High ghouls when they bring their killer fashion to the howlways of the spooktacular Haunted High! When the ghouls of Monster High follow Spectra Vondergeist one day, they discover a creeperiffic Ghost World with an all-spirit school. But their scary-cute student bodies are hardly welcome with the very strict Principal Revenant, and she punishes Spectra with frightful detention chains that prevent her from re-joining Monster High. Now, it's up to the imperfectly perfect friends to take on ghostly forms in order to save one of their own from disappearing forever!

Either I've been watching these 'Monster High' TV specials for much too long and ghoulishly fallen victim to the cartoon's darkly charms or the writers have suddenly and miraculously honed in their craft because 'Haunted,' the latest installment in the animated series based on the popular fashion doll franchise, is surprisingly good. Or at least, it is by children's viewing standards. For a while, I considered my age perhaps having something to do with my enjoyment, but I imagine age would only make me more cynical rather than willing to embrace it since I haven't quite developed a soft spot for the entire franchise as a whole. A common theme in most episodes is acceptance, self-esteem and belonging while still remaining an individual. That's all well and good, but there are only so many times this can be explored before feeling stale and tired. So, what changed to suddenly make this and the previous entry better than others?

Far as I can tell, the storytelling has much improved, meaning producers brought in better writers, or in this case, one decently good writer: Keith Wagner. He's also the same gentleman who wrote 'Freaky Fusion,' which I also found myself enjoying. While I may not be familiar with his other work, all of it in animated television, his talent is evident with two tales thus far that touch on other themes equally, if not more, important as the other four I've subjected myself to. 'Freaky Fusion' nicely explored the value of learning one's heritage, taking pride in that and realizing family doesn't have to be strictly defined as blood relations. Considering the target audience, the topic is a bit smarter and more profound than would be generally expected of a children's cartoon. The same goes for 'Haunted' as it amusingly probes into the dangers and usually negative effects of gossip and naïvely believing rumors without questioning its validity. 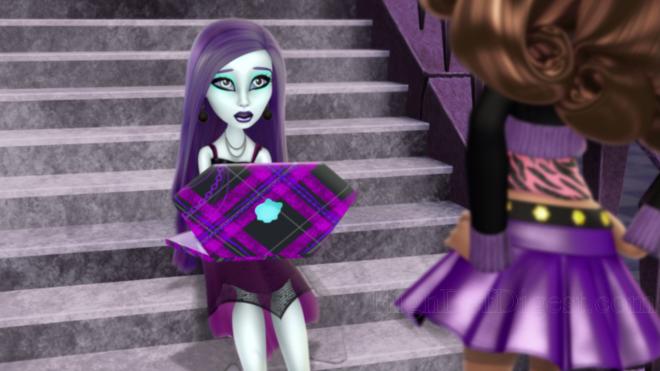 Again, this is a thoughtful subject matter for a series most parents and adults would otherwise be quick dismiss, and the filmmakers treat it commendably with a seriousness that never feel too grave while also turning it into another spooky fantasy adventure. Of course, readers can easily accuse me of reading too much into it, but I stand by my statement. The plot starts with Spectra Vondergeist, an aspiring journalist, dreadfully asking students of Monster High for the latest scoop to report on her blog. When confronted about a claim turning out to be a hurtful lie, she doesn't show much remorse or concern for a retraction. Then again, she's not exactly given time to think about her actions because a secondary plot about Draculaura being haunted interrupts, urging the horror-themed characters to investigate Ghost World where they find an all-spirit school is under the scarily stern and strict authority of Principal Revenant.

This is where 'Haunted' turns in a story that goes far deeper than I would have expected. Not that it's impossible; I simply would not have anticipated filmmakers to take it to the scale and extent they do. At Haunted High, the friends discover the principal's sinister plan of increasing student enrollment with the ghouls of Monster High. Without giving away too much — just in case any parent actually wants to watch with their little monsters — the plot boldly takes issue with larger fictional narratives designed for personal gain, comparing it to the effect of rumors. The ghost kids are fed lies about the living world and the "solids" conspiring to invade the spirit realm so as to control, believing the story mostly because the claim comes from a place of authority. But before reaching precariously close to turning political, the filmmakers quickly return to Spectra learning the damage of gossip. Still, it's a surprisingly thoughtful episode, showing another freaky side to the spooky franchise.

Universal Studios Home Entertainment brings 'Monster High: Haunted' to Blu-ray as a two-disc combo pack with a code for an UltraViolet Digital Copy. A Region Free, BD50 disc sits opposite a DVD-9 inside a regular blue keepcase with a glossy, embossed slipcover and a small catalog for collectors. After a couple skippable trailers, viewers are taken to a menu screen with full-motion clips, music and the usual options.

Like its predecessors, the latest 'Monster High' entry haunts Blu-ray with the same economical, one-dimensional style of computer animation. But in spite of its Saturday morning cartoon look, the seemingly plain and ordinary picture quality nonetheless shows excellent fine lines around various objects and the spook-tacular Haunted High building. The 1080p/AVC MPEG-4 encode exposes elaborate detailing in the ghouls' fashionable clothes and hair. The color palette is mostly geared towards primaries which are richly saturated and pronounced, but secondary hues are also quite bold to give the 1.78:1 frame a buoyant and energetic feel. Brightness levels are full-bodied and accurate while contrast is well-balanced with crisp, brilliant white throughout.

The teen ghouls scare their latest frightful adventure with another excellent DTS-HD MA soundtrack. However, much of the action is located in the fronts, reminding viewers of its made-for-television origins. Nevertheless, the lossless mix sounds great, providing a satisfyingly wide soundstage filled with various convincing off-screen activity. With vocals very well-prioritized and intelligible in the center, movement across all three channels is flawless while dynamic range maintains distinct clarity and a surprisingly punchy and responsive bass provides weight. On a couple occasions, the rears are employed for the more elaborate action sequences, nicely enhancing the soundfield with seamless panning.

Unlike previous entries in the 'Monster High' franchise, 'Haunted' is one of the better and smarter efforts yet to be produced, teaching kids a valuable lessons on the negative effects of gossip and naively believing them. The Blu-ray arrives with an excellent audio and video presentation, but the supplements are incredibly lacking compared to previous releases. Nevertheless, the little monsters will be more than satisfied.

Sale Price 74.95
Buy Now
3rd Party 74.95
In Stock.
See what people are saying about this story or others
See Comments in Forum
Previous Next
Pre-Orders
Tomorrow's latest releases