An aspiring opera singer finds herself transported back to Victoria-era London - and into the arms of a reclusive, disfigured maestro determined to make her a star. The silver-throated Christine (Jill Schoulen) enjoys success through the arrangements of her new lover (Robert Englund)...until she realizes that he has been committing unspeakably grisly murders in her honor and won't stop until he's completed his masterpiece...in blood!

My memory of 1989's horror drama 'The Phantom of the Opera' is a vague collection of fragments from the night I went with a friend to see it. I remember the Edwards Theater was unusually empty for a Friday night, even more so for a movie on its opening weekend, and only about five other patrons were in attendance to see a brand new adaptation of Gaston Leroux's classic 1910 novel. Looking back, this small fact was pretty telling of the production's box office success, of which there was none, basically making it a major flop. Although we weren't familiar with the original source and only knew of the story from classic films, along with Andrew Lloyd Weber's Broadway musical, which was quite popular at the time, our reasons for watching it were very simple. The most obvious and immediate was that we were avid horror-hounds, attending every genre flick released without a thought or care about their quality.

After all, this was a period — from the late 80s through the early 90s — when filmmakers and studios were a bit more daring, releasing strange, and fantastical works, and hungry fans could have their pick of the wildest and most bizarre yet richly imaginative. Of course, these movies didn't always satisfy and several were laughably bad, the sort with concepts that definitely looked better on paper. And so, my friend and I took a gamble, as we did each and every weekend, salivating at the mouth with eager imaginations desiring for the latest gorily surreal phantasmagoria. From what I recall, we felt fairly confident we'd walk away at least mildly pleased because this new version came from Dwight H. Little, the director of 'Halloween 4: The Return of Michael Myers,' the horror sequel that brought back The Shape in all his creepy glory. Though we weren't raving about it to friends, I remember feeling satisfied and entertained, and the movie holds up decently well. 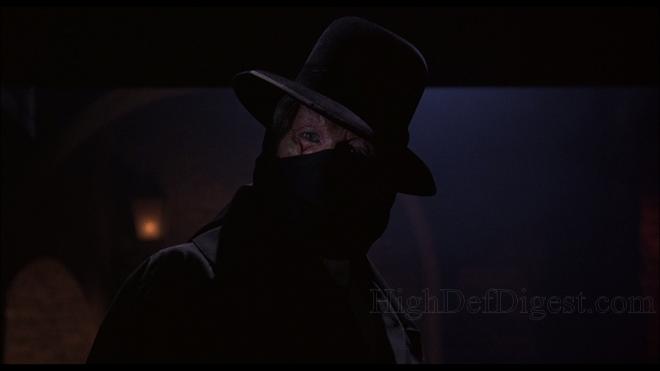 Ultimately, our most significant reason for rushing to theaters to see the movie was Robert Englund starring in a role other than Freddy Kruger, albeit still playing a horribly disfigured man terrorizing innocents. At the time, Mr. Englund was riding on the successful coattails of the 'Nightmare on Elm Street' franchise, a memorable portrayal that made him a genre legend and icon. In the role of the crazed musician Erik Destler, the actor found an opportunity to demonstrate his dramatic skills, that he's more than just a character actor behind layers of makeup prosthetics. The movie may not have done much to further his career, but his name, along with his performance, now belongs next to Lon Chaney, Claude Rains and Herbert Lom as respected actors that have tackled Destler's phantom. And of course, Englund is mesmerizing in the lead, expressing a great deal of the character's emotional depth with his eyes and simple glances.

One of the more impressive aspects of Little's 'The Phantom of the Opera' is that the script by Gerry O'Hara and Duke Sandefur is probably one of the more faithful adaptations ever translated to film. Leroux's original novel is a gorily detailed and violently dark gothic tale about a man's obsession for fame and an unfettered fixation on the innocent soprano Christine Day (Jill Schoelen). Granted, there are several notable liberties and creative changes, such as opening and ending in a modern New York setting, but for the most part, the film is true to the spirit of Leroux's horror novel. Worth appreciating for fans is Destler's Faustian deal, which is made a point with a stage performance of Charles-François Gounod's opera Faust. Then there's Misha Segal's haunting score underscoring the drama and suspense while Little, working with cinematographers Peter Lyons Collister and Elemér Ragályi, fills the screen with wild, evocative visuals that dazzle. Though several areas tend to drag, the overall production puts on a good show, satisfying the hunger of horror-hounds with some class.

Shout! Factory brings 'The Phantom of the Opera (1989)' to Blu-ray under the distributor's Scream Factory line. The Region A locked, BD50 disc is housed inside the normal blue case. At startup, the disc goes to an animated menu with full-motion clips and music playing in the background.

The darker, grislier 1989 adaptation lights up the screen with a very pleasing and often excellent 1080p/AVC MPEG-4 encode (1.85:1). Making its way to the Blu-ray stage for the first time, the high-def transfer shows plenty of sharp detailing in the architecture of the opera house and distinct fine lines along the walls of the Phantom's rocky sewer abode. Threading in the costumes is very well-defined, and facial complexions are revealing with lifelike textures during close-ups. There are a few poorly-resolved sequences, but thankfully, they don't take much away from the better parts. Some white specks and dirt litter the screen from time to time, and contrast is a tad on the hot side, create a few spots of very mild blooming. Colors benefit the most with rich saturation and boldly-rendered primaries while black levels are true and deep with mostly good shadow delineation.

The phantom breaks a leg — along with several other gory body parts — with a strong and overall satisfying DTS-HD MA soundtrack that will leave fans smiling. As is customary to most Scream Factory releases, owners are given the choice between a modern 5.1 remix and a stereo track that's truer to the original design. Although the latter usually wins by default, in this instant, the former proves to be quite the showstopper, particularly when the music of Misha Segal comes into the play. The romantic gothic score fills the room with exceptional separation and detailing in the orchestration and an excellent room-penetrating mid-range. Low bass is hearty and adequate, providing weight and depth, while vocals are well-prioritized and intelligible. Though mostly a front-heavy track, rears are occasionally employed to expand the soundfield with pleasing directionality without also being too distracting. Overall, the 5.1 lossless mix surprisingly offers a better listening option overall the stereo track.

A more faithful adaptation of Gaston Leroux's classic 1910 novel, 'The Phantom of the Opera' is a satisfyingly gory and visually pleasing telling of a familiar tale from director Dwight H. Little. Horror legend and icon Robert Englund demonstrates his dramatic chomps in the leading role and gives one of his more memorable performances. The Blu-ray arrives with great picture quality, an excellent audio presentation and a small but decent assortment of supplements. The overall package is worth a look.

Sale Price 14.99
List Price 16.95
Buy Now
3rd Party 49.99
In Stock.
See what people are saying about this story or others
See Comments in Forum
Previous Next
Pre-Orders
Tomorrow's latest releases