Hollywood actor turned idiosyncratic auteur Robert Montgomery directs and stars in this striking crime drama based on a novel by Dorothy B. Hughes. He plays a tough-talking former GI who comes to a small New Mexico town to shake down a gangster who killed his best friend; things quickly turn nasty. 'Ride the Pink Horse' features standout supporting performances from Fred Clark, Wanda Hendrix, and especially Thomas Gomez, who became the first Hispanic actor to receive an Academy Award nomination for his role here. With its relentless pace, expressive cinematography by the great Russell Metty, and punchy, clever script by Charles Lederer and Ben Hecht, this is an overlooked treasure from the heyday of 1940s film noir.

Robert Montgomery's 1947 film 'Ride the Pink Horse,' an adaptation of Dorothy B. Hughes' 1946 novel of the same name, is heavy on the atmosphere, following lonely protagonist Lucky Gagin (Montgomery, pulling double-duty as both star and director) on a suicide mission to New Mexico, as he attempts to blackmail the leader of a criminal empire as retribution for killing one of Gagin's friends.

It would be easy to sum the film up for how entrenched it is in American film noir – or, more accurately, the sub-subgenre of American border noir, thanks to its setting in the southwest and cinematographer Russell Metty, who would go on to put his cinematographic stamp on the classic 'Touch of Evil' – but there is something irreverent lingering within the darkened recesses of Montgomery's film that cause the usual shadowy bleakness to let through a small glimmer of light.

The film is filled with the standard morally gray characters like Montgomery's abrasive Lucky Gagin, hunching gangster Frank Hugo (Fred Clark), and Hugo's kept woman, the femme fatale Marjorie Lundeen, played by Andrea King. But its preternatural cynicism – spawned by a postwar weariness, itself a modification to Hughes' original story – is undercut by the presence of three central characters, all of whom are seemingly hell bent on helping Gagin. The assistance they lend isn't so much in terms of achieving his objective of blackmail, but in recovering the humanity he so plainly lost while serving in World War II.

As such, 'Ride the Pink Horse' introduces then-eighteen-year-old Wanda Hendrix as the waifish, fresh-faced, and seemingly naïve social outcast Pila, who greets Gagin soon after his arrival in the tourist trap of San Pablo – which happens to be bustling with excitement and anticipation over the annual celebration wherein Zozobra, the God of bad luck, is ritualistically burned to stave off harm for another year. Pila's eagerness to protect Gagin is also a portent of the character's doom, as the young woman gifts the irascible stranger an idol intended to protect him from the vision she'd had of his imminent death. 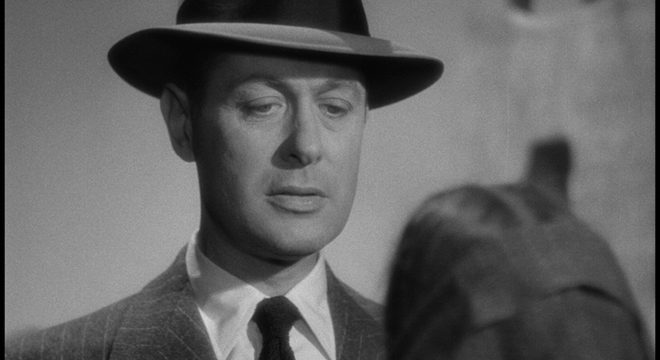 While Gagin's busy dodging Pila and dealing with Hugo, he acquires two unlikely compatriots. One is an easygoing, diminutive, and bespectacled government agent named Bill Retz (Art Smith), who is aching to bring Hugo down and thinks Gagin's blackmail leverage is his golden ticket. The other is Tomas Gomez's burly, affable Pancho, the down-to-earth proprietor of the carousel (featuring the titular pink horse), whose unsophisticated, threadbare demeanor is (like Pila) the polar opposite of Gagin's lusty, big city materialism.

The script by Ben Hecht and Charles Lederer (with some script doctoring allegedly being done by producer and long-time Hitchcock associate Joan Harrison), at first plays with convention, setting Pancho up to be something of a parasite, as he gravitates toward Gagin and his cash in a dusty San Pablo watering hole, encouraging the visitor to ingratiate himself to the locals by wetting their whistles. But soon Pancho reveals himself to be the real deal, offering Gagin his modest bed – after the festival has made lodging impossible to find – and again when he protects the injured American by remaining silent, even while two of Hugo's men beat him mercilessly for Gagin's.

The idealism of the three characters isn't treated with the kind of scorn that is prominent in noir's cynical worldview. Instead, it is seen as a backdoor for Gagin, a chance to regain the humanity lost to the psychological wounds of war and his post-war experience back home. As Gagin's dealing with Hugo and Marjorie bring him closer to the demise Pila warned him about, his three unlikely guardians find themselves drawn into the action, and are simultaneously asked to pull Gagin from the bleak world he's walked in for so long.

That optimistic hand being held out to a protagonist who is dangling by a thread separates 'Ride the Pink Horse' from not only its source material, but also other films of the same ilk. And it speaks to Montgomery's willingness to flirt with convention as a filmmaker. Here he frames a great deal of the shots over the shoulder of the character he's playing, allowing the audience to become Gagin for certain scenes, like his slow walk into a San Pablo bus station before meeting Pila, and his introduction to Marjorie, for example.

Early on, the effect makes Gagin something of a cipher, an unknowable everyman who is notable only for his short fuse and allusions to his propensity for violence – evidenced by the service revolver he keeps tucked away in his jacket like a "lucky charm." But as the narrative unfolds, and Gagin's bitterness and greed are transformed into something else, the character is more often framed from the front and at a distance. This gradual unveiling of Lucky Gagin makes for the character's shift to work on a visual level as well as an emotional one, allowing the audience the chance to know and see him by the time his turning point arrives.

The same goes for Pila and Pancho, as each character finds he or she has been placed in harm's way for no other reason than to help a stranger. Over the course of the film, Pancho proves himself to be the hearty, unpretentious protector. But it is Pila who rises even higher, taking a more active role in the narrative than even Gagin does at one point. And by the time the film's denouement fills the screen, it is clear she will no longer be the same shy, awkward, diminutive woman she was before, as she takes hold of Gagin's narrative and fully makes it her own.

The result is a stylish film noir that more than looks the part, but refuses to act it. With a final sequence that seems unable to tolerate the film's earlier cynicism, 'Ride the Pink Horse' challenges the conventions of other crime films and offers up something with just a hint of optimism, letting a small shaft of light into the otherwise shadowy recesses of a dark film. 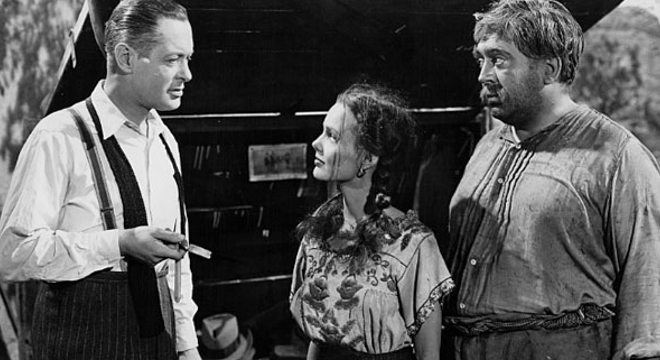 'Ride the Pink Horse' comes from Criterion as a single 50GB Blu-ray disc inside the standard clear keepcase. The insert features an illustration by artist Mac Burckhardt, while the spine is numbered at 750. Along with the disc is foldout insert featuring an essay by filmmaker Michael Almereyda.

The film has been given a new 2K digital restoration, and the results are very good. Aside from a few artifacts here and there, the image is clean. Distortion is not a problem anywhere else, either, as the image is free from flicker, shakiness, or significant scratches of any kind. Grain is present in some shots, but for the most part the picture looks pristine

Fine detail is remarkably high in close ups, revealing plenty of facial features and textures in clothing. That detail does drop to a certain extent during wider shots, but significant detail in background elements helps from making it much of a problem. Contrast is great throughout, making full use of the film's superb black-and-white photography. Blacks are rich and full-bodied throughout, with plenty of variances up and down the gray scale. Shadows maintain an appropriate gloom without distorting the level of detail or becoming overwhelmed with issues like crush and banding. Whites maintain a warm glow, but never run too hot.

Overall, this is a terrific transfer for an image that is only held up by the limitations of the source.

The LPCM 1.0 track does what it needs to from start to finish. That is, it balances the film's use of dialogue with the musical score by Frank Skinner. The result is a nice combination of sound that creates an atmospheric vibe appropriate to the aims of the production. Sound effects register appropriately, even though they don't pack much of a sonic punch. There is even a nice sense of place and atmosphere during scenes set in busy restaurants and during the festival that becomes such a major plot point of the film.

In the end, the monaural track makes for a surprisingly rich listening experience in a film where dialogue is the most important factor.

Audio Commentary Featuring Film Noir Historians Alain Silver and James Ursini – Silver and Ursini deliver a compelling commentary in which they discuss the idea of film noir and the ways in which 'Ride the Pink Horse' adheres to and breaks from the conventions associated with it. Both men complement the other nicely, making for an engaging listen from start to finish.

In Lonely Places (HD, 20 min.) - This is an interview with Imogen Sara Smith, author of In Lonely Places: Film Noir Beyond the City. Smith gives an engaging and insightful, thought provoking interview about film noir and how Montgomery's film fits in its particular worldview. This is absolutely worth watching.

Lux Radio Theatre Adaptation of 'Ride the Pink Horse' (59 min.) – This is the complete radio adaptation of the film, which brings Robert Montgomery, Wanda Hendrix, and Thomas Gomez back to their roles.

Although – or maybe because – it shirks many conventions of the crime genre, 'Ride the Pink Horse' is a fascinating bit of film noir that features some fantastic performances all around. Most notable is Gomez, who became the first Hispanic nominated or an Academy Award for his portrayal of Pancho. With superb cinematography highlighting a gripping and sometimes irreverent narrative, the film is a strange mishmash of cynicism and optimism that makes for interesting viewing. With great picture, good sound, and some fascinating extras, this one is recommended.

Sale Price 27.99
List Price 39.95
Buy Now
3rd Party 12.98
In Stock.
See what people are saying about this story or others
See Comments in Forum
Previous Next
Pre-Orders
Tomorrow's latest releases