Overview - From the director of The Cell comes a visually stunning epic fantasy about a bedridden man who entertains a curious little girl by telling her a fantastical story of exotic heroes and far off places which reflects his state of mind. The central story takes place in a remote 1920's hospital where a small girl named Alexandria (Catinca Untaru) is recovering from a severe looking shoulder injury incurred in a fall while trying to pick oranges. One day she happens to meet Roy (Lee Pace) - a stunt or "gag" man for the "flickers" or moving pictures - who seems to have injured himself out of a future in a particularly reckless stunt, even for those times. He is a clearly unhappy man who - through his own carelessness - unwittingly leads Alexandria to believe that he intends to entertain her with a lavish, epic story of exotic heroes and far off places. As the stuntman's health reaches to the point of peril - so does the story he is telling her...with potentially fatal consequences.
OVERALL
Recommended

Over the course of the last two decades, Tarsem Singh (a commercial and music video director responsible for the critically panned but visually arresting ‘The Cell’) has been diligently working to develop and finish ‘The Fall,’ a career-long labor of love that finally debuted at the Toronto Film Festival in 2006 and earned a limited theatrical release in 2008. Shot over a period of four years in a nation-hopping trek across the globe, financed largely on his own dime, and bursting with the same surreal imagery he brings to all his projects, ‘The Fall’ arrives on home video with a lot of baggage. Does Tarsem’s second film suffer from the same problems as his first? Is it just an overblown music video? Does it have any substance?

’The Fall’ follows a 1920s stuntman named Roy (Lee Pace) who’s crippled when a dangerous leap from a bridge ends in tragedy. Bedridden and depressed in a Los Angeles hospital, Roy meets a young girl named Alexandria (the precocious and exceptionally natural Catinca Untaru) and begins to tell her an elaborate tale of six heroes -- a lovelorn Indian warrior (Jeetu Verma), an ex-slave (Marcus Wesley), an explosives expert (Robin Smith), the infamous Charles Darwin (Leo Bill), an otherworldly mystic (Julian Bleach), and a mysterious, masked bandit (initially Emil Hostina and eventually Pace himself) -- who join forces to take revenge on their sworn enemy, the evil Governor Odious (Daniel Caltagirone). As Roy’s story unfolds, Alexandria’s imagination takes center stage, erasing the fine line between the harsh realities of the world and the naive visions of her mind’s eye. Yet even as he grows to genuinely care for the girl, Roy has an ulterior motive: tricking Alexandria into stealing a bottle of morphine tablets that he wants to use to kill himself.

Let’s be honest: most everyone who steps up to defend Tarsem’s ‘The Cell’ is forced to point to its evocative imagery while settling for a contrived plot and shallow characters. I would know… I happen to be one of those tepid pseudo-fans. However, to my relief, I haven’t felt the need to justify or apologize for any shortcomings in ‘The Fall’ simply because I didn’t encounter any. The director’s second film is surprisingly sweet and unexpectedly charming -- a painterly vision that snaps back and forth between a dusty reality and a vivid dreamscape just as Terry Gilliam did in ‘The Adventures of Baron Munchausen’ and Guillermo del Toro did in ‘Pan’s Labyrinth.’ His fairy tale still features bleak and disturbing visuals, as well as abstract symbology and recurring images, but his cast brings such warmth and compassion to their parts that they elevate the entire script. Pace and Untaru are phenomenal, co-anchoring the dual natures of both their realities and providing a compelling commentary on innocence and desperation. I don’t know where Tarsem found the young actress in particular, but her naturalistic mannerisms and line readings are so disarmingly endearing that I shared the smiles and tears that graced her face.

I’ve dug through the general problems critics had with ‘The Fall’ and, frankly, most of their comments seem to have been primed to launch before they even watched the film. It’s tough to argue that Tarsem’s surreal visualizations are hollow and pretentious when the story of Roy and Alexandria is so personal, complex, and down-to-earth. It’s even more difficult to claim that the film is incoherent or plodding since its plot is so richly developed and its tone so lyrical and precise. Granted, ‘The Fall’ is the sort of artistic experience that will always have its critics and I’ll be the first to admit that this isn’t a film for everyone. It’s methodical pacing and the alterations of its time stream are quite reminiscent of ‘300’ (which has its own share of irritable hecklers), it’s underlying plot contains a fully-developed homage and various nods to silent era Hollywood, and the filmmakers blend a variety of practical, digital, and artistic special effects (including a bit of deft stop motion animation and several extremely intricate miniatures). Even so, this is art as film folks. Just because it includes surrealism and inventive uses of familiar techniques doesn’t make it pretentious -- it just makes it bold and extraordinary.

As it stands, I was completely taken with ‘The Fall.’ I wasn’t prepared to spend so much time outside of its fantasy realm in 1920s Los Angeles, I didn’t expect to so intensely connect with its protagonists, and I definitely didn’t think I would get so caught up in Roy’s tragic life and Alexandria’s dramatic imagination. I know some people will vehemently loathe this film simply because of its structure and visual experimentation -- in fact, I’d suggest you rent the film itself before making a decision based on the strength of this Blu-ray release -- however, anyone looking for a poetic blend of dazzling artistry and two compelling stories will most likely adore ‘The Fall.’ Give it a chance and see if it grabs a hold of your heart and mind as much as it did mine. 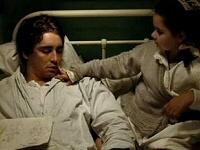 ’The Fall’ features a stunning, near-flawless 1080p/AVC-encoded transfer that’s ripe with vibrant primaries, lush bronzed tones, and exquisitely inky blacks. Contrast is spot on and never buckles under the intensity of the beating sun or the low lighting of Alexandria’s hospital. Detail is remarkable and precise as well. Every cracked rock, parched patch of skin, and tattered costume reveals fine textures and minute imperfections that simply could not be achieved on DVD. In fact, the entire picture, from beginning to end, is incredibly clean -- even though grain is almost imperceptible, I didn’t detect any DNR or print scrubbing at work on the image. As a whole, this transfer is gorgeous and I imagine many people will use select scenes as demo material for their friends and family.

I hesitate to register a lone complaint but, for whatever reason, there are at least two scenes that suffer from some noticeable but minor artifacting. Specifically, when the masked bandit covers his dead brother (watch the spreading blood at the top portion of the white cloth) and when Roy finishes telling the story to Alexandria (keep your eyes on the wall behind his head). However, slight technical nitpicks aside, ‘The Fall’ pairs gorgeous visuals with a truly exceptional transfer that must be seen to be believed. 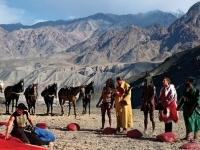 Exploding buildings, roaring muskets, an enormous slave-drawn carriage, a tree erupting in flame… ‘The Fall’ offers filmfans so many standout sonic sequences that its rich Dolby TrueHD 5.1 surround track rarely fails to engage the listener from every direction. In case you hadn’t already guessed it, LFE support is hearty and aggressive, providing healthy bass rumbles and hard-hitting gunfire. The rear speakers deliver the goods as well, effectively crafting an immersive soundfield, generating realistic ambience, and creating convincing interior and exterior acoustics. More importantly, dialogue is crisp and well prioritized in the mix. While some of Alexandria’s third-act narration is occasionally overwhelmed by the film’s musical score, it never seems to be the result of anything but the director’s intention and the girl’s soft voice. Likewise, Beethoven’s Symphony no. 7 in A major features gorgeous stringed crescendos and lush low-end tones, but is sometimes injected into the soundscape with relatively reckless abandon.

Regardless, ‘The Fall’ offers a gripping lossless experience that doesn’t disappoint. Whether the track should be considered reference level is open to a bit of debate, but I think Sony’s impressive TrueHD mix enhances the film’s imagery and perfectly complements its tone. 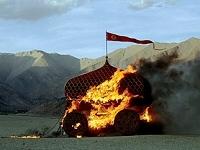 The Blu-ray edition of ‘The Fall’ includes all of the extensive special features from the concurrently-released DVD, but merely presents the video content in standard definition. Ah well, the commentaries and documentaries (as well as one of the deleted scenes) make this a satisfying and noteworthy supplemental package. 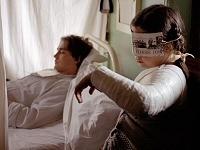 ’The Fall’ may not be for everyone, but I was completely surprised at how quickly and thoroughly it drew me into its beautifully charming tale and mesmerizing fantasy world. Thankfully, the Blu-ray edition’s technical presentation won’t earn as much debate as the film itself. A near-perfect video transfer, a powerful lossless audio track, and a generous helping of detailed supplements make this release worth every cent. While I’m sticking by my suggestion that people rent the film before blind-buying ‘The Fall,’ this is an easy release to recommend and one that will have a comfortable home on my shelf for a long time.

Sale Price 95
Buy Now
3rd Party 95
In Stock.
See what people are saying about this story or others
See Comments in Forum
Previous Next
Pre-Orders
Tomorrow's latest releases