Returning to the city from her wealthy employer residence, Joyce Willecombe (Nancy Olson), spots two armed men on the train. She reports them to the conductor who radios in to the Station’s police. Once at Union station she points out the men to Lt. William Calhoun (William Holden), head of the station’s police squad and they find out that the gunmen are members of a gang who have kidnapped her employer’s blind daughter and are seeking a $100,000 ransom. The Chicago police headed by inspector Donnelly (Barry Fitzgerald), and the FBI are both called in. The action in this classic Film Noir culminates in a chase through the station’s underground tunnels. Directed by Rudolph Maté (D.O.A.).

In between 'Sunset Boulevard' and 'Born Yesterday,' actor William Holden managed to squeeze in 'Union Station,' a low-budget but effective film noir that uses a railroad backdrop to frame a standard crime story. Director Rudolph Maté may lack the flair and ferocity of more acclaimed noir helmsmen, but he constructs some arresting shots and keeps the movie's engine chugging along, telling his stark tale in a brisk 82 minutes. The reliable Holden handles his chores well, reuniting with his 'Sunset Boulevard' love interest Nancy Olson, but there's not much romance in Sydney Boehm's just-the-facts-m'am script, which keeps a laser focus on the criminal proceedings and efforts of a team of crackerjack cops to foil them.

What begins as an innocent train trip for Joyce Willecombe (Olson) evolves into a desperate race against time when she spots two suspicious men, one of whom is concealing a gun, boarding her New York-bound railcar. Joyce alerts the jaded conductor, who placates her fears by radioing ahead to Union Station and the office of Lt. William Calhoun (Holden), who heads up the depot's police force. Calhoun meets Joyce on the platform, and after some initial investigation discovers the men in question are part of a nefarious kidnapping ring that has abducted one of Joyce's closest friends, a defenseless - and very rich - young blind woman. Finding where these thugs have stashed their victim and trapping them before the woman is harmed and her wealthy family pays a sizable ransom form the crux of this no-frills yarn.

'Union Station' is interchangeable with any number of second-tier film noirs, but Holden's magnetism and a top-notch supporting cast led by crotchety Irishman Barry Fitzgerald of 'Going My Way' fame help it rise above other genre entries. Olson, with her almond-shaped eyes and soft-spoken demeanor, often resembles Gene Tierney, but lacks Tierney's glamour and elegance. After making a splash in 'Sunset Boulevard,' Olson made only a few more feature films before becoming a fixture on television for many years.

Maté, an acclaimed cinematographer who photographed Rita Hayworth to perfection in her finest films (including the iconic 'Gilda'), adopts a semi-documentary style, employing several location scenes and infusing the story with a pulsating sense of realism and urgency. There's not much character development and the action sequences aren't particularly complex, but a few memorable scenes - most notably, one that transpires in a stockyard - keep us engaged and punch up the pedestrian plot. The movie also provides a slick behind-the-scenes look at the inner workings of a metropolitan train station (much like 'Airport' would do for aviation terminals 20 years later), which adds an extra layer to the story.

'Union Station' pales when compared to more classic examples of film noir, but fans of the genre will appreciate its toughness, stripped-down presentation, and the engaging performances of its stellar cast. Holden's natural, no-nonsense portrayal carries the day, and transforms what easily could have been a forgettable low-budget picture into a respectable exercise in suspense. 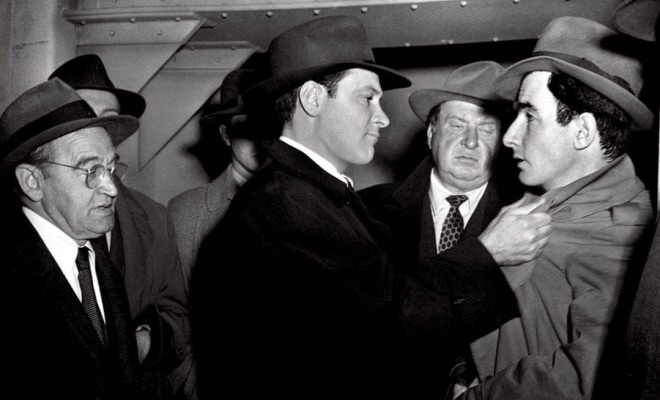 'Union Station' arrives on Blu-ray packaged in a standard case. Video codec is 1080p/AVC MPEG-4 and audio is DTS-HD Master Audio 1.0. Once the disc is inserted into the player, the full-motion menu with music immediately pops up; no previews or promos precede it.

Picture quality tends to fluctuate wildly on Olive releases, but thankfully 'Union Station' boasts a better than average 1080p/AVC MPEG-4 transfer. Though contrast isn't quite as pronounced as it should be for a film noir, black levels are deep enough and solid whites nicely offset them. A nicely varied gray scale heightens detail levels, and overall clarity is quite good. Grain is evident but not overpowering, adding appropriate texture to the taut tale. Close-ups show off facial features well, background elements are easy to discern, and very few instances of crush creep into the picture. Consistent yet faint speckling afflicts the image, and a few noticeable marks crop up, but this is a generally pleasing transfer that should satisfy the film's fans. It doesn't rank up there with the best noir efforts, but then again, neither does 'Union Station.'

The DTS-HD Master Audio mono track supplies clear, decently modulated sound that's marred by some surface noise and a few pops and crackles. Accents such as typewriter tapping, luggage loading, and footsteps crunching against the pavement are all crisp and distinct, and the well-rendered hustle and bustle of the station provides essential atmosphere. Dialogue is always easy to comprehend - even when spoken in a thick Irish brogue by Barry Fitzgerald - and the sparingly employed music score fills the room with ease. Though there's not a whole lot to this track, what's there is well presented.

There are no extras whatsoever, not even a trailer.

Well paced, relatively tense, and competently acted by a strong cast, 'Union Station' earns a solid B on the film noir grade scale. Though it lacks the classy production values and artistic direction of better noir efforts, Rudolph Maté's terse but not particularly memorable kidnap/manhunt yarn has some fine moments and maintains interest from beginning to end. Olive's Blu-ray presentation lacks supplements, but good quality video and audio transfers punch up the (limited) appeal of this catalogue title that's strictly for William Holden and diehard noir fans.

Sale Price 19.99
List Price 29.95
Buy Now
3rd Party 17.32
In Stock.
See what people are saying about this story or others
See Comments in Forum
Previous Next
Pre-Orders
Tomorrow's latest releases