Jon Stewart makes his directorial debut with Rosewater, a drama based on a memoir by the Iranian journalist Maziar Bahari. As the film opens, Bahari returns to his home country in order to report on the 2009 presidential elections there. When the results lead to large public protests, Bahari (Gael García Bernal) videotapes the civil unrest. This brings him to the attention of authorities, who apprehend him and keep him in solitary confinement in hopes of getting him to confess to crimes against Iran. However, his international celebrity leads to help from powerful and unexpected places. Rosewater screened at the 2014 Toronto International Film Festival.

Though not quite as emotionally gripping or stirring as it imagines itself to be, 'Rosewater' nevertheless remains a poignant and affecting bio-drama about a human right we tend to take for granted. The adaptation of Maziar Bahari's memoir Then They Came for Me serves as a stark reminder of how precious and treasured our freedom of speech truly is — what a privilege it is to speak our minds and share information and knowledge with others. In one quietly moving sequence, a small band of intellectual students are forced to keep satellite dishes on the roof of a building like a guarded secret. Knowing what happens in other parts of the world is apparently a punishable crime, an act against the state, and these young men risk their freedom, possibly even their lives, for the sake of simply wanting to know. When they talk, they speak proudly with a desire to show that the Iranian people are not living in a third-world Stone Age.

Earlier, our protagonist Maziar, portrayed with exceptionally touching moments of tragic hero, browbeaten man and heavy-hearted soon-to-be-father Gael García Bernal, was awakened by three government goons who immediately rummage through his personal belongings. A record of Larry Cohen's I'm Your Man is confiscated as seditious material, and a box set of 'The Sopranos' is deemed pornographic. When questioned about a Maxim magazine, which usually features an attractive female celebrity in a rather provocative pose, Bernal is baffled to answer honestly about the periodical's admittedly lewd content, showing that the filmmakers are not without a small sense of humor and irony, making audiences chuckle while also feeling anxious. As strange and foreign as it looks, while we watch from our comfortable privileged standpoint, the freedom to choose one's entertainment is not a liberty entitled to all people around the world. 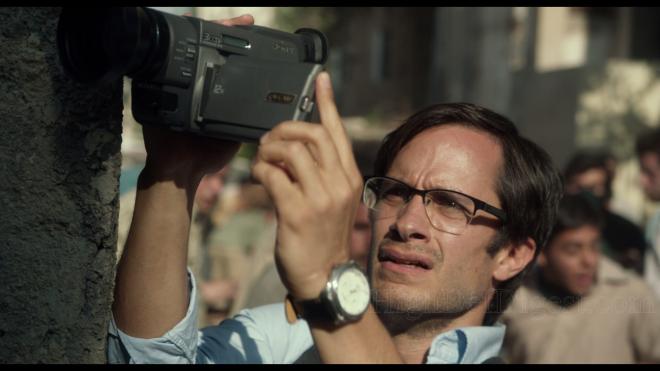 There are other pockets of humor sprinkled throughout this tale of one man's harrowing experience of being falsely arrested for nearly three months. It's not to minimize the incident or give it a light-hearted treatment, as much as to make the encounter bearable, to better swallow the reality of something that otherwise seems shocking and perhaps outlandish, an intriguing underlying theme within the comedy genre. This comedic aspect may not come as much of a surprise because the screenplay comes from comedian, political pundit and TV personality Jon Stewart, who also makes his directorial debut with a satisfying bang. This fact also comes with its share of irony since part of the reason for Bahari's detainment is due to his appearance on an interview for The Daily Show. The London-based journalist's interrogator "Rosewater" (an excellent Kim Bodnia) uses clips of the segment as evidence, failing to differentiate satire from fact.

As the shrewdly observant and hilarious host of the late-night show, Stewart is all-too familiar with the thin line between fiction and reality, where people refuse to see sarcasm and parody is born from human foolishness, not some clever disguise masking a deeper truth or stance. In 'Rosewater,' Stewart proves himself as outstanding in exposing the rash, absurd rigmarole behind the camera as he is in front, astutely pointing out the inanity of Bahari's imprisonment while also showing the journalist's will to survive. In one very discerning and calculated sequence, Bahari walks the streets of London and as he narrates his life, windows becomes screens showing various clips from his life and the world, an ingenious effect that hints to plot's overarching theme. Stories, knowledge and information live with us, form us and are part of us. The freedom to share our experiences is a privilege treated as a crime in some parts, and Bahari's offense is bearing witness to injustice and wanting to share it.

Universal Studios Home Entertainment brings 'Rosewater' to Blu-ray as a two-disc combo pack with an UltraViolet Digital Copy. The Region Free, BD50 disc sits comfortably opposite a DVD-9, and both come inside a blue, eco-elite case with a shiny, glossy slipcover. After several skippable trailers, viewers are taken to a static menu with music.

The political drama makes a statement with a mostly spotless and impressive 1080p/AVC MPEG-4 encode that's true to the creative intentions of the filmmakers. Shot entirely on HD cameras, the freshly-minted transfer is squeaky clean and immaculate for the most part, but there is the occasional scene that's a bit too sterile and smooth, reminding viewers of it coming from a digital source. Nonetheless, objects are finely detailed and distinct, exposing every imperfection in the walls of the Iranian prison and individual pores in the face of the cast.

Presented in its original 1.85:1 aspect ratio, the video comes with comfortably bright contrast, showing crisp, brilliant whites and providing excellent visibility in the distance. The color palette is tad subdued, just enough to give the picture a somewhat dreary, grayish overtone, yet primaries are nicely saturated and accurately rendered. Brightness levels are on the strong side with a few sequences of mild crush in the darkest portions, but overall, blacks are true and penetrating, providing the image with several good scenes of dimensionality.

On the audio side of the debate, Jon Stewart's directorial debut arrives with a strong and very pleasing DTS-HD Master Audio soundtrack. Although not particularly memorable and not likely to surprise most, the track does precisely what is expected, delivering a wide and generally expansive soundstage with crisp, precise vocals in the center. Imaging is pleasing broad, especially with Howard Shore's score and the few song selections, displaying lots of background activity with excellent clarity and notable separation between the channels. Strong dynamic range keeps the action in check while low bass provides adequate depth and weight, though it's nothing that every stands out. The surrounds are occasionally employed to expand the soundfield with first-class directionality and very good panning, but it's not very consistent and immersive. Still, for a character-driven drama such as this, the lossless mix is a real pleasure.

Though not quite as emotionally gripping or stirring as it imagines itself to be, 'Rosewater' nevertheless remains a poignant and affecting adaptation of Maziar Bahari's memoir. Written and directed by Jon Stewart, and starring Gael García Bernal, this film is a stark reminder that our freedom to share our experiences is a privilege treated as a crime in some parts of the worls, and Bahari's only offense is bearing witness to injustice and sharing it. The Blu-ray arrives with outstanding picture quality and adequate audio, but supplements are rather disappointing. Overall, the package is sure to please. Worth a look.

Sale Price 8.99
Buy Now
3rd Party 8.99
In Stock.
See what people are saying about this story or others
See Comments in Forum
Previous Next
Pre-Orders
Tomorrow's latest releases