A Swedish family travels to the French Alps to enjoy a few days of skiing. The sun is shining and the slopes are spectacular but, during a lunch at a mountainside restaurant, an avalanche turns everything upside down. With diners fleeing in all directions, mother Ebba calls for her husband Tomas as she tries to protect their children. Tomas, meanwhile, is running for his life... The anticipated disaster failed to occur, and yet the family's world has been shaken to its core, a question mark hanging over their father in particular. Tomas and Ebba's marriage now hangs in the balance as Tomas struggles desperately to reclaim his role as family patriarch.

Ruben Östlund's 'Force Majeure' focuses its razor-sharp perception on the immense impact a chance occurrence has on a single marriage, and by doing so, applies biting, often hilarious analysis of the archetypal roles played within conventional families.

The film takes aim at the patriarch, by centering on an ideal, well-to-do Swedish family, composed of a young, successful businessman named Tomas (Johannes Kuhnke), his charming wife Ebba (Lisa Loven Kongsli), and their two children, Vera and Harry (played by real-life siblings Clara and Vincent Wettergren). Taking place over the family's five-day ski vacation to the French Alps, the narrative is largely concerned with an exploration of the fallout between Tomas and Ebba, when an emotionally traumatic but physically benign experience leads to questions of Tomas' role as father and placement at the head of the family.

On the second day of skiing, the family enjoys lunch on a rooftop terrace at the base of a peak. When a controlled avalanche appears to be barreling out of control, panic spreads atop the terrace and Tomas flees, leaving his wife and children behind. When the harmless fog of snow lifts, revealing the avalanche to have been controlled after all, Ebba and Tomas sit and resume their meal, seemingly in a state of shock. It is not until later that Ebba begins to scrutinize her husband's actions, confronting him with questions of cowardice, finding him and his perception of the event lacking. 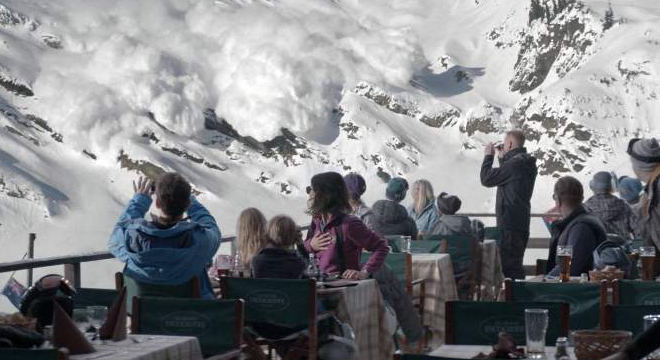 Östlund's insightful lens penetrates deep into the family's upturned dynamic, revealing insecurities on both sides of the equation. The impeccably manicured slopes of the ski resort become symbolic representations of the picture-perfect family's façade, while the omnipresent sounds of avalanche control explosions mirror the barrage of Ebba's pointed attacks on Tomas. Soon, as Ebba's emotional assault intensifies, the once liberating implication of a vacation takes on a claustrophobic undertone of confinement. Inside their room, the forced intimacy destabilizes the family, which is made worse when Tomas maintains differing perception of the event.

But Östlund doesn't allow for ambiguity in the increasingly chilly dynamic between husband and wife. Because of the explicit, clear-cut nature of Tomas' reaction, his refusal to atone becomes the source of even greater tension, brought out in a series of remarkably uncomfortable interactions between radically different couples. A revelatory discussion with an acquaintance named Charlotte (Karin Myrenberg), regarding the feasibility of an open marriage exacerbates Ebba's frustration, while the arrival of family friend Mats (Kristofer Hivju, 'Game of Thrones') and his 20-year-old girlfriend Fanni (Fanni Metelius) turns the embattled couple into an admonitory account they fail to heed.

When the incident becomes a matter of discussion and debate amongst the various parties, the search for a reasonable explanation leads to Fanni questioning whether Mats would respond differently. The blow to his psyche and male ego is extreme, and Östlund uses the occasion to pull away from his primary subjects, to examine the issue in a dissimilar environment. And the result is another darkly comical exchange that pokes at the notion of masculinity and the societal expectations of it, while simultaneously setting fire to the conception that it is synonymous with strength.

The term force majeure is used in contracts to prevent the parties involved from being held accountable should an obligation go unmet in the wake of an extraordinary event. Östlund – who also wrote the script – uses the institution of marriage to suggest an implicit contractual obligation exists with regard to conventional gender roles. However, through the actions of his characters – namely, Tomas' cowardice, Charlotte's polyamory, and Mats' May-December romance and off-screen ex-wife and children – the director implies that such established and clear-cut functions are no longer the agreed upon standard. Regardless of the appearance of superficial traditionalisms, such an antiquated yardstick can no longer measure the modern family unit.

Through it all, there is a wry sense that the once inviting downhill trajectory of the ski slopes have become emblematic of Tomas' attempts to recover his lost status as paterfamilias. Once the descent has begun there's nothing to be done until he reaches the bottom. Time and again, 'Force Majeure' focuses on its characters as they climb to the summit of a ski slope via gondola, chair or T-bar lift, only to glide willfully, almost effortlessly back down. The insinuation that everyone is positioned instinctively toward baseness is underlined during the family's final trip down the slopes, with conditions at near zero visibility, when Tomas is granted a fateful opportunity at ascension.

Throughout the film, Östlund's script and direction ensures the film maintains a frosty sense of humor that brilliantly toys with its characters' perception of themselves and one another. It all leads to an intense and enigmatic denouement, in which the slow departure from the mountains hints at a new kind of clarity for some, and the possibility of an entirely new kind of self-delusion for others. Either way, Östlund suggests, differing levels of perception are something everyone learns to live with. 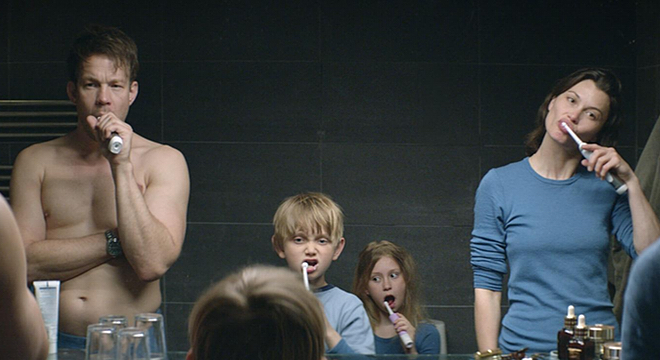 'Force Majeure' comes from Magnolia Home Entertainment as a single 50GB Blu-ray disc in the standard keepcase. The disc is loaded with several previews for new and upcoming releases from Magnolia ahead of the top menu. These can be skipped to play the feature or take a look at the slight supplements included with this release.

A significant amount of 'Force Majuere' takes place on the ski slopes, meaning there is an awful lot of white onscreen at any given moment. This leads to concern about flatness, lack of detail, and an overblown picture. Thankfully, the transfer suffers from none of these potential maladies, as the disc delivers a surprisingly rich, detailed image with plenty of depth, even in an all-white environment. Small details are noticeable on the slopes that prevent the scene from looking flat and giving the image the complexity it needs to be as engaging as possible.

Fine detail is present throughout. Facial features are on full display in nearly every scene. Wisps of hair, pores, and fine lines are clearly visible in close-ups and medium length shots. Texture is found on nearly every surface – even snow – and is plentiful in the characters clothing. Background elements look fantastic, as the peaks of the French Alps are rendered with terrific clarity, helping the film maintain its sense of place.

Color is vibrant, as the characters' wardrobes often stand out well against the stark white backdrop. But even when the film moves inside, the use of color is strong. Skin tones look accurate throughout, running the gamut from normal to the ruddiness of someone who's just been outside skiing all afternoon. Contrast is also high in most places. Black levels produce deep, dark shadows with excellent delineation. Title cards and cuts to black are full-bodied, without a trace of banding or crush. White balance is very good, too, although there is a scene or two where it looks as though things are running just a tad too hot.

Overall, the disc offers a very nice image on a film with a backdrop deserving of one.

The Swedish DTS-HD Master Audio 5.1 mix is spectacular. From top to bottom, the audio is impeccable. The mix handles each facet of its job very well, focusing primarily on dialogue and atmospheric elements, but also making powerful use of the film's score.

Characters are easily heard, whether they're speaking Swedish, French, or English. The dialogue is balanced beautifully with sound effects that create a robust, immersive environment. It doesn't matter if the action is unfolding on the slopes, a restaurant, or the cramped space of a bathroom, there is a significant layer of ambient noise going on to deepen the listening experience. The best examples of this are naturally found on the slopes, where the avalanche control explosions sound off from different channels depending on where the camera is focused. But there are small things, too, like the whoosh of skis on snow, the distinct crunch ski boots make when walking on the white stuff, or the din of a posh resort restaurant. It all sounds great.

Moreover, the audio delivers rich sections of the musical score from composer Ola Fløttum that maintains a consistent, pleasurable presence throughout the film, but reaches a terrific crescendo during its climax.

This is a fantastic listening experience all around.

Interview with writer/director Ruben Östlund and actor Johannes Bah Kuhnke (HD, 17 min.) – The director and star sit down for a quick interview in which Östlund recounts what inspired the film and what his approach to the tone and look of the film were.

AXS TV: A Look at Force Majeure (HD, 3 min.) – This is just a collection of clips from the interview above mixed with shots from the film.

'Force Majeure' is a biting and wickedly funny dark comedy that pokes at its characters specifically, but succeeds in making larger statements as well. It is also a beautifully crafted film with exquisite cinematography and sound design delivering a complete sense of place that is used compellingly throughout the film. With terrific performances from the entire cast, and Östlund's on-point writing and directing, the film is easily one of the best of 2014. The disc features great picture and wonderful audio, and even though the supplements are a little lacking, this on still comes highly recommended.

Sale Price 15.94
List Price 16.98
Buy Now
3rd Party 11.95
In Stock.
See what people are saying about this story or others
See Comments in Forum
Previous Next
Pre-Orders
Tomorrow's latest releases