Overview - A family man convicted of killing an intruder must cope with life afterward in the violent penal system.
OVERALL
Rent it First

In a world of drug dealers, rapists, and murderers, Hollywood would have us believe that prison guards are the most logical villains. Seriously, I can’t think of a single, legitimate profession that’s more regularly vilified in the industry… well, aside from prison wardens. Think about it. The lovable inmates in ‘The Shawshank Redemption’ had to contend with Byron Hadley, ‘Cool Hand Luke’ had to deal with a silent crackshot like Boss Godfrey, and the poor boys in ‘Sleepers’ struggled to endure the stomach-turning advances of their guard -- even ‘The Green Mile’s sappy, empathetic guards had to contend with a fellow employee with a penchant for sadism.

Former stuntman and newly-established writer/director Ric Roman Waugh decided to approach the subgenre from a different direction and present a scenario that “could happen to you.” Unfortunately, the result is ‘Felon,’ a film that suffers from the same stereotypical developments and abuses of power featured in far too many prison dramas before it. When family man Wade Porter (Stephen Dorff) is sent to prison for three years after killing a fleeing intruder on his property, he must survive racially charged encounters with various inmate gangs, earn respect and a prison education from his roommate, a philosophy-spouting mass-murderer named John Smith (Val Kilmer), and participate in yard fights orchestrated by the sadistic chief prison guard, Lt. Jackson (‘Lost’s Harold Perrineau).

The story isn’t terribly complicated, but there's a bit of potential tucked within its depressing frame. The idea of following a man sentenced to jail for circumstances that could feasibly happen to anyone is a solid one. To the director’s credit, the first half of ‘Felon’ is a sobering and fairly intense examination of prison life and the desensitization experienced by guards in the penal system. Despite a contrived stabbing that occurs during Porter’s transport to the facility (come on, could our everyday victim really be that unlucky?), the events that land Porter in jail are believable, the introduction of the various gangs is frightening, and a few, all-too-brief glimpses into Lt. Jackson’s home life allow ‘Felon’ to step out from its genre brethren and approach the material from a refreshing perspective. More importantly, Kilmer and Dorff inject authenticity and pathos into their characters, eliciting genuine sympathy with every scene.

Sadly, that’s where my praise ends. First and foremost, Waugh’s script isn’t at all balanced -- he devotes far too much time to Porter’s wife (Marisol Nichols) and her mother (a woefully one-note Anne Archer), but hardly provides any time with Lt. Jackson outside of the prison. Instead of keeping his camera with Porter, or making the film a dual study of Porter and Jackson, Waugh focuses on a waning wife and an annoying, pushy mother-in-law, both of whom lost my compassion early on. The director even gives Porter’s son (Vincent Miller) his share of the spotlight, but doesn’t give the young kid anything to do except pull his father’s clothes out of the trash and stare blankly at his mother. Worst of all, however, is the fact that Jackson is such a monster that any credibility the story had for the first hour is lost as the veteran guard nearly loses his mind. He’s revealed to be an alpha male curb-stomper whose sole motivation is power and the illusion that he’s invulnerable. Granted, Perrineau does a fine job with what he’s handed, but his part is underwritten, underdeveloped, and underused.

As it stands, ‘Felon’ is the sort of film that makes for a decent rental when nothing else is available -- it has a pair of standout performances, serves as a respectable exploration of prison culture, and even offers up a few unexpected developments. Unfortunately, an eye-rolling third act, unpolished subplots, and an onslaught of cliché sequences undermines the film’s much touted “it could happen to you” mantra and leaves ‘Felon’ looking like the rest of the pack. 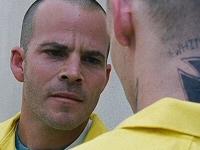 ’Felon’ features a gritty 1080p/AVC-encoded transfer that drowns its picture with wave after wave of heavy, salt-n-pepper grain. Since I’m a fan of a solid, filmic presentation, I normally wouldn’t give grain a second thought, but when it occasionally disrupts the image, shortens depth, and hinders dimensionality, and is crisper than the rest of the on-screen imagery, I can’t help but cry foul. The film’s muted colors and oppressive shadows don’t help the situation either -- I haven’t had the opportunity to compare the disc to its standard definition counterpart, but I can’t imagine finding any significant differences. Black levels are sometimes crushed or clouded with noise, edge enhancement pops up throughout, and whites are often hot and overblown. Making matters worse, quite a few shots look soft, dull, or downright awful. All things considered, scenes shot in daytime exteriors look pretty good, but they can’t save the overall picture from itself.

While I have no doubt that the Blu-ray edition of ‘Felon’ faithfully represents its director’s intention (aside from the edge enhancement), I can’t in good conscious give this transfer the same score as others on the market. I know some readers want us to solely evaluate the intrinsic quality of a disc, but giving this transfer four or five stars would be terribly misleading and provide a disservice to anyone glancing at our overall ratings. Ultimately, videophiles won’t have to deal with any major technical issues, but they probably won’t enjoy the experience either. 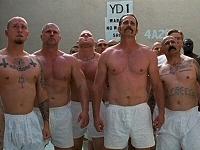 Thankfully, the audio didn’t give me as much of a headache. Sony brings ‘Felon’ to Blu-ray with a respectable Dolby TrueHD 5.1 surround track that handles the various scuffles, gunshots, and sounds of the prison with ease. The LFE channel is tasked with too much vocal support (at times leaving Kilmer’s Smith sounding like a clogged toilet), but it also enhances the atmosphere of the prison every time a cell door slams closed or a punch lands. While the rear speakers are generally limited to ambient noise and acoustic support, they create a convincing soundfield when Porter and Smith are escorted into the yard each day. The dialogue is centralized and crisp, prioritization is spot on (even during the chaotic fights), and fairly precise directionality allows listeners to immerse themselves in the experience.

The only thing that really disappointed me is the fact that the track isn’t as clean or polished as better lossless tracks I’ve reviewed. I’m sure it can be attributed to the low-budget sound design itself, but if the box didn’t tell me otherwise, I probably would’ve assumed I was listening to a standard Dolby track. Even so, fans of the film will find little to whine about here and are likely to enjoy the audio presentation.

I really wanted to dig into a commentary on this particular release, if for no other reason than to listen to director Ric Roman Waugh discuss his script and characters. Unfortunately, the only feature on the disc is a plodding, promotional EPK called “The Shark Tank” (HD, 13 minutes). While it has a fair share of interviews and behind-the-scenes revelations, it didn’t pack enough content to give me insight into the film or make me appreciate the path the story took. 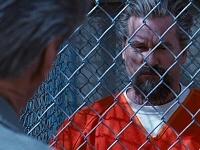 Stephen Dorff and Val Kilmer may bring the goods, but ‘Felon’ is undone by an unstable script, plenty of predictable plot developments, and an abundance of clichés that undermine its realistic vibe. Alas, the Blu-ray edition of the film doesn’t even offer fans of the film much incentive. A faithful but ugly video transfer, a solid but slightly underwhelming audio track, and an absence of any significant supplements leaves ‘Felon’ looking more like a bargain bin title than a serious contender for your cash. It’s worth a rent, but not much else.