The Two Faces of January

Screenwriter Hossein Amini makes a stylish directing debut with this sleek thriller set in Greece and Istanbul, 1962. Intrigue begins at the Parthenon when wealthy American tourists Chester MacFarland (Viggo Mortensen) and his young wife Collete (Kirsten Dunst) meet American expat Rydal (Oscar Isaac), a scammer working as a tour guide. Instead of becoming his latest marks, the two befriend him, but a murder at the couple's hotel puts all three on the run together and creates a precarious bond between them as the trio's allegiance is put to the test.

The world of Patricia Highsmith's novels is often filled with morally compromised men, many of whom increasingly face a day-to-day existence on a razor's edge. From the on-the-fly conspiracy of 'Strangers on a Train,' to the inexplicable mingling of self-delusion and narcissism in Tom Ripley (in both René Clement's 'Purple Noon' and Anthony Minghella's 'The Talented Mr. Ripley'), Highsmith's most indelible characters run the gamut from small time con men, to full-on sociopaths. And that makes her novel 'The Two Faces of January' a compelling match for the talents of screenwriter (and now director) Hossein Amini – so long as the comparison drifts more towards 'Drive' and less towards 'Snow White and the Huntsman.'

Like Clement and Minghella before him, Amini seems drawn to Highsmith's works not only for the complex antiheroes at their center – though given today's movie and television landscape, the term "antihero" is more than overused – but also because she places those ethically ambiguous men in the kinds of settings that are ripe for visual storytelling. To Amini's credit, 'The Two Faces of January' is a sumptuous film from beginning to end. The first-time feature filmmaker shows a knack for representing the setting and the period, which, in this case consists of early 1960s Greece, without losing the narrative thread in all the beautiful details at his disposal. The time period and the Grecian landscape are handled delicately; they permeate every frame, and yet feel more like a suggestion than a conscious effort toward classification.

The relative restraint with which the setting is handled seemingly allows Amini's characters room to develop within it, especially as the plot attempts to establish the psychological connection between the co-leads of Viggo Mortensen and Oscar Isaac. Mortensen plays Chester MacFarland, a swindler on the run in Europe with his young wife Collette (Kirsten Dunst), from the men he ripped off back home in America. Touring the ruins of Athens, Chester is introduced to Rydal (Isaac), a young, charismatic American expat working as a tour guide. Like Chester, Rydal is also on the run from something in his past – the memory of his recently deceased and emotionally abusive father. 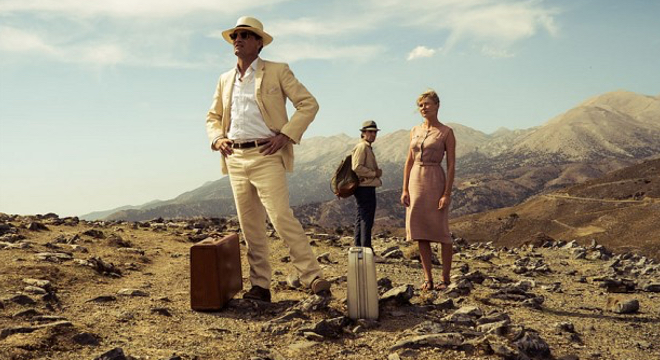 This adds a compelling layer to the relationship between the increasingly paranoid Chester, and the young and smitten-with-Collette Rydal. After conning the MacFarland's out of a few hundred dollars – a little ruse the young man uses to supplement his extended stay in Greece – Rydal learns his scheming is nothing compared to the underhandedness that put Chester and Collette on the lam. After Chester has an inopportune run-in with a man hired to get the money he stole back, Rydal finds himself an accessory to the MacFarlands' crimes, which only escalate the longer the trio stays in Greece.

'The Two Faces of January' is equal parts potboiler/thriller and familiar character study. Highsmith's novel isn't breaking new ground when it comes to characters she's written before, but it is a continuation of her exploration of the darker side of human nature. Amini's screenplay splashes around in the same morally complicated waters, but struggles to plumb the psychological depths of the characters in a manner that would provide insight into their actions beyond greed – either for money or for love. The father-son dynamic between Chester and Rydal is unexplored for the most part; it is left to become a coda of sorts, a reminder of what has transpired, rather than an active part of the film's narrative.

Along with the surface-level psychological aspects of Rydal and Chester's relationship, Collette is little more than a prop. Dunst, like Isaac and Mortensen, turns in a fine performance, but unlike her co-starts, she's left with little to do, but react to the men around her. The only time Collette is shown to have some agency is when she appears to pursue Rydal as a romantic replacement for her increasingly weak-willed and untrustworthy husband. Of all the aspects of the narrative that work, but need to be explored further, the attraction between Rydal and Collette is nowhere near the top. The simmering sexual tension between the two works better in small doses, as an underlying threat to Chester's untenable position. Instead, it becomes blatant and textual to the degree that Rydal's conflict with this father figure becomes borderline Oedipal.

Still, Amini paints a vivid, often gorgeous picture with the help of cinematographer Marcel Zyskind, bathing his setting in a golden hue, until the portent of a coming storm literally darkens the horizon. The result is a competent recreation of a far more detailed painting by an artist who had the luxury of contemplating every brushstroke, so that the end result was as congruous as it was striking. In his dual roles, Amini seems unsure which of the narrative's many aspects he most wants to emphasize, and in doing so focuses on them all, leaving insufficient time or space for any one to establish itself as the heart of the film.

All of which leaves 'The Two Faces of January' as a sharp-looking, sometimes-compelling thriller that could have been great if it had only explored its characters more. 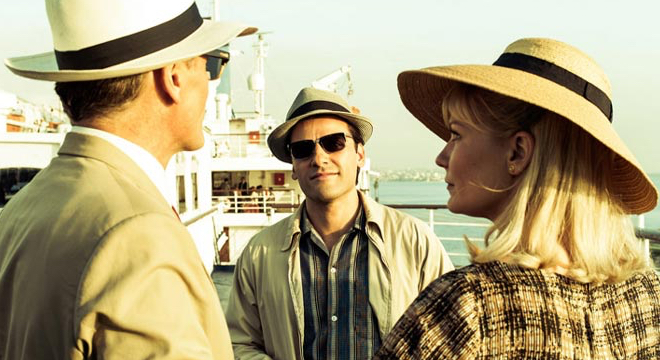 'The Two Faces of January' comes from Magnolia Home Entertainment as a single 25GB Blu-ray disc in the standard keepcase. The disc will automatically play a handful of current and updateable previews before the top menu, many of which are thematically linked to the feature. The top menu is straightforward, offering the viewer a choice of audio settings and a handful of special features that explore the film a little more.

With its 1080p AVC/MPEG-4 encoded transfer, 'The Two Faces of January' features a gorgeous image that is as bright and vividly colored as it is rich in detail. The finer aspects of everything from the actors' facial features, the textures of the clothing they wear, to the beautiful landscape that has ensnared them is presented with the utmost clarity and accuracy. The sumptuous image is equally detailed regardless the time of day, which creates some stunning glimpses of golden hour, as well as night, and even a pre-storm shot that looks particularly ominous.

The color is balanced against the film's warm palette, which is typically whites, browns, and tans, but tends to cool as the narrative progresses. Contrast is also high throughout, producing even blacks and whites that offer inky darkness without loss of detail and stunningly bright day scenes that convey the heat and glaring sunlight without looking overblown. There is no trace of banding or crush anywhere in the image.

This is an incredibly sharp, detailed image that gives the film's amazing locales and period specific details the attention they deserve.

The DTS-HD Master Audio 5.1 mix offers a straightforward listening experience that runs with the film's score, sometimes to the detriment of the ambient sounds of its location.

For the most part, the mix offers a clean, crisp listening experience that presents its dialogue first and foremost. This makes the actors easy to hear, even when they're confronted by the din of a busy marketplace, the sound of an old (even for the '60s) bus, or the omnipresent crashing waves of a ship at sea. While the balance seems to be in check, with the dialogue coming through the center channel and sometimes through the front right or left speakers, the atmospheric noise can be difficult to detect. At times it seems as though the rear channels have nothing to do, while the front speakers are taking on the majority of the load. This sometimes leads to a one-dimensional listening experience. Other times, the rear channels deliver a more immersive listening experience that, although it sounds good, leaves the listener unsure as to why one scene was played with such depth, while others not at all.

Still, this is a strong audio mix that, when it is given the chance to shine, certainly does so.

Deleted Scenes (HD, 6 min.) – The deleted scenes are offered in a large chunk that plays one after the other. A few of the scenes offer a better glimpse into the relationships of the characters – especially Chester and Collette – but none of them seem like particularly egregious exclusions.

Gag Reel (HD, 4 min.) – This is a typical gag reel that offers some decent laughs and paints the shoot as a more lighthearted affair than its tone would suggest.

Traveling in Style (HD, 3 min.) – This is a quick look at the fashion that is featured in the film.

Shooting the Odyssey (HD, 3 min.) – This short featurette looks at the gorgeous locations.

A Twist on the Classic Thriller (HD, 3 min.) – This feature offers a look at Highsmith's novel in comparison to Amini's script.

AXS TV: A Look at 'The Two Faces of January' (HD, 3 min.) – This is an annoying feature of most Magnolia releases, which combines interviews from all the above supplements into a single watered down version.

Although it could have dug deeper into the characters' needs and wants, as well as the relationship between Mortensen and Isaac, 'The Two Faces of January' is still an enjoyable thriller. The cast is great and delivers on the tension that usually accompanies a tale from Highsmith. At times, though, the film seems too focused on marching from point A to point B, and the result is a diluted sense of the thematic elements that would have made the experience seem far richer and more rewarding that it ultimately was. This is unfortunate, as a little more depth would have made what is a good film into a great one. Still, with superb picture, very good sound, and some light but interesting supplements, this one is definitely worth a look.

Sale Price 12.5
List Price 16.98
Buy Now
3rd Party 5.66
In Stock.
See what people are saying about this story or others
See Comments in Forum
Previous Next
Pre-Orders
Tomorrow's latest releases