It’s a shame that it’s taken Jet Li and Jackie Chan, two of the most personable, internationally-celebrated martial arts film stars alive today, almost thirty years to join forces. However, it’s an even greater shame that their first project together is ‘The Forbidden Kingdom,’ a by-the-numbers, Wuxia adventure that shoves its talented legends aside to focus on a modern teenager who transforms from a superfan into a superhero. At its best, it’s a fun family flick that delivers some decent fight scenes while attempting to bookend high-flying kung fu with elements of ‘The Neverending Story.’ At its worst, it’s a limp actioner that has a difficult time establishing an engaging narrative or a compelling cast of characters.

When a martial arts genre junkie from South Boston named Jason Tripitikas (Michael Angarano) encounters a magical staff that whisks him back in time to ancient China, he comes under the protection of two immortals: a drunken nomad named Lu Yan (Jackie Chan) and a disciplined warrior called Silent Monk (Jet Li). The two powerhouses don’t exactly get along, but still agree to impart their knowledge and fighting styles to the boy when they realize he’s destined to free an entity known as the Monkey King (also played by Li) from the clutches of the evil Jade Warlord (Collin Chou). As Jason hones his fighting skills and embarks on a perilous journey, he must earn the respect of an assassin with a personal vendetta (Lui Yifei), face a series of deadly foes, and prevent the Jade Warlord from obtaining immortality.

The problem with ‘The Forbidden Kingdom’ is that it’s all too familiar. While the actors have a blast bounding around the screen and bantering with each other, the material simply doesn’t offer much in the way of wit or originality. A group of gun-toting bullies hassle Jason in Boston (even though you know he’ll be back… with kung fu!), Lu Yan and Silent Monk come to blows when they first meet (don’t worry, they quickly figure out they’re on the same side!), and our young Chosen One quickly learns how to go toe to toe with experienced villains (after a rousing ‘80s montage that leaves no question as to who’s got the touch and the power!). Yet, it’s the film’s paper-thin mythos and ho-hum backstory that really left me shrugging my shoulders. The Monkey King is an annoying prankster that completely failed to earn my sympathy, the Jade Warlord’s seeming invincibility is predictably undone by his overconfidence, and Lu Yan spouts rhetoric that reveals nothing but inconsistent philosophy and contradictory motivations. The plot isn't entirely derailed by its shortcomings… it just never amounts to a distinctive, thrilling, or remarkable piece of storytelling.

Don’t get me wrong, ‘The Forbidden Kingdom’ still has a few things to offer casual martial arts fans and devoted followers of Chan or Li. Angarano is surprisingly effective in spite of his underdeveloped role -- he may not have a standout lead performances under his belt quite yet, but I’m sure this isn’t the last we’ll see of the young actor. It doesn't hurt that renowned fight choreographer Yuen Woo-ping keeps the kung fu fast and intense, the air bound antics to a minimum, and the battles evenly matched and exciting. While magic inevitably spoils the fun when natural talent is replaced with computer wizardry, Woo-ping tosses enough down and dirty fights into the mix to keep things interesting. To top it all off, Chan and Li do what they do best. Chan earns some decent laughs with his usual schtick, Li keeps his performance brooding and precise, and each martial artist tackles a second role. Their efforts may not save the film, but the entire cast brings enough charisma to the table to make it difficult to outright dislike the film.

Imperfect but charming, exciting but occasionally plodding, and fun but unfulfilling, ‘The Forbidden Kingdom’ is a fluffy, harmless adventure flick that will entertain the younger members of your family long before it earns a place in your heart. While I won’t say I was completely disappointed with Chan and Li’s first pairing, I will say it could have been much more iconic, satisfying, and memorable. Ultimately, give the flick a spin and see if it captures your imagination more than it did mine. 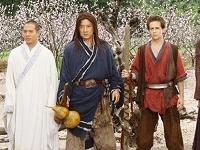 ’The Forbidden Kingdom’ features a striking 1080p/AVC-encoded transfer that falls just short of a reference level presentation. First and foremost, the color palette is quite impressive, benefiting from vivid primaries, deep blacks, and consistently comfortable contrast leveling. Fleshtones are natural as well, leaving Chan and Li’s aging skin looking as healthy as that of their young co-stars. Better still, detail is exceptionally crisp and revealing -- fine textures look realistic, shadowed objects aren’t drowned out by darkness, and hair, clothing fibers, and stitching are perfectly rendered on the screen. In fact, the overall image boasts a refined, three-dimensional appearance that allows many sequences to leap off the screen.

Unfortunately, while I didn’t detect any edge enhancement or source noise, there are a few scenes that suffer at the hands of errant artifacting, black crush, and banding. It’s also worth noting that a few shots are slightly softer than the rest of the film. Granted, the transfer’s technical mishaps aren’t prevalent enough to severely detract from the overall presentation. However, they’re distracting enough to hold the otherwise gorgeous picture back from perfection. 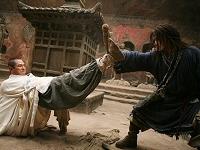 Lionsgate continues to demonstrate their commitment to high definition with another fantastic DTS HD Master Audio 7.1 surround track that will delight fans and newcomers alike. From the film’s opening flights of fancy to its final, climactic showdown, dialogue is consistently crisp, unhindered by chaotic action, and deftly enhanced by subtle LFE support. The track impresses further each time a battle explodes onto the screen -- resonant low-end thooms are powerful, stable treble tones never waver, and transparent channel pans make movement eerily realistic. Directionality is also spot on. I never struggled to identify the source of a sound, yet I didn’t feel like any sound effect was over-localized or relegated to a single channel. As such, invasive environmental ambience and interior acoustics allow a convincing and immersive soundfield to emerge; one that’s only limited by the minor shortcomings of the film’s original sound design.

If I can muster any complaint, it’s that some of the film’s sound effects are thin and stagey. While I don’t think it’s a technical problem with the DTS HD MA track, it’s still worth mentioning as random punches sound underwhelming and artificial. Still, it’s a small issue that will probably only matter to the most stringent audiophiles among you. ‘The Forbidden Kingdom’ sounds great and shouldn’t give anyone interested in the film any pause. 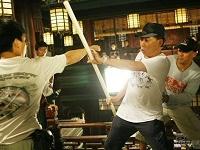 The Blu-ray edition of ‘The Forbidden Kingdom’ features all of the supplements that appear on the standard DVD (in high definition no less), includes some exclusive content (detailed in the next section), and covers just enough behind-the-scenes info to satisfy fans of the film. 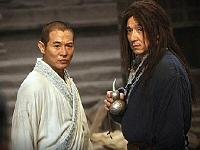 ’The Forbidden Kingdom’ plays it safe, electing to delve into family-friendly territory instead of giving Jackie Chan and Jet Li fans the martial arts team-up they’ve waited years to see. Still, regardless of how you feel about the film itself, there’s no mistaking that its Blu-ray debut is worth a look. It features an excellent video transfer, a powerful DTS HD MA 7.1 surround track, and a solid collection of supplements and exclusive content. It may not be the film everyone hoped for, but Lionsgate once again delivers an impressive disc.