A single father makes his meager living holding up an advertising placard on a traffic island in the middle of a busy highway. His children wait out their days in supermarkets before they eat with their father and go to sleep in an abandoned building. As the father starts to come apart, a woman in the supermarket takes the children under her wing. There are real stray dogs to be fed in Tsai's everyday apocalypse, but the title also refers to its principal characters, living the cruelest of existences on the ragged edges of the modern world.

Stray Dogs is many things at once: minimal in its narrative content and syntax, as visually powerful as it is emotionally overwhelming, and bracingly pure in both its anger and its compassion. One of the finest works of an extraordinary artist.

Tsai Ming-liang's 'Stray Dogs' is a singular work, an incredible expression of, and a yearning to understand, the complexities of the human condition. It is a work brimming with humanity, even though its harrowing depiction of extreme poverty and mental anguish often comes in concentrated form, usually through masterfully arranged static shots that engage the audience as much through the beauty of their composition, as they do through the inevitable reaction that will arise as a result of their unprecedented length.

The film concerns a homeless alcoholic played by Lee Kang-sheng, and his two children (played by Lee Yi-cheng and Lee Yi-chieh, respectively), as they survive on a meager existence in Taipei. The man spends his days holding real estate advertisements at a busy intersection, bracing himself against the wind and rain with little more than a plastic poncho and the repetitive recitation of an ancient poem. While the man stands with his sign, his son and daughter wander a local supermarket, rustling up food in the form of free samples. After work, the trio is rejoined, to eat some takeout, wash in a public restroom, and then bed down in an abandoned building.

Over the course of the film, the children have encounters with three women (or a single woman, who happens to be played by three different actresses: Yang Kuei-mei, Lu Yi-cheng, and Chen Shiang-chyi). Each encounter depicts the children being watched over by the woman (or women) in one form or another. The film's first static shot depicts the children in bed, as a woman methodically brushes her hair. A second encounter sees the young homeless girl receive a hasty shower by the manager of a supermarket, while a third sees the children seemingly rescued, huddled in the woman's tender embrace, during a torrential downpour.

If these moments seem narratively incongruous, it's because they are, and they are meant to be. One of the defining aspects of 'Stray Dogs' is its utter lack of a chronological narrative. As each character remains mostly anonymous, so too do their circumstances. The way Ming-liang embraces the unknown becomes the driving force behind the film, as each long take affords the audience an opportunity to develop numerous questions. Although the story seemingly follows the family's routine, and the eventual dissolution of it, there is no confirmation that what is presented onscreen didn't happen prior to the homelessness, nor is there any indication that something else is actually at play. 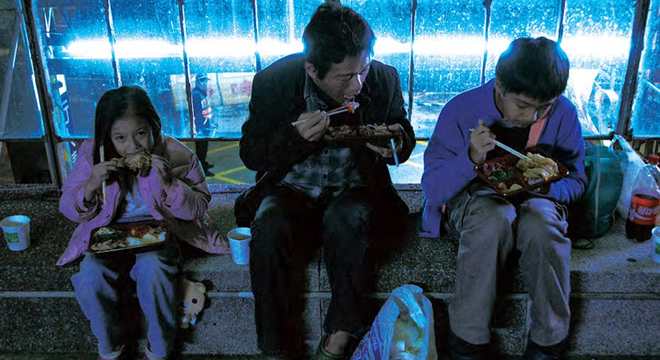 One of the features of the film is how Ming-liang allows for questions of "what is real?" to slip into the conversation, as the chronology of the narrative strays to such a degree that intonations of fantasy and surrealist imaginings are inevitably brought to the forefront. At one point following the woman's protection of the children during the rainstorm, Kang-sheng, the woman, and the two children are inside a strangely furnished apartment, complete with space age chair. There is a birthday party happening, it seems, and there is a slight sense of festivity. And yet, the blackened walls, seemingly dripping with soot and mold suggest something entirely different, a halfway point between destitution and the life he once had, perhaps?

It is a compelling question. The beauty of 'Stray Dogs' comes from the extent to which it goes to ask the audience to ponder its characters' circumstances, and to stay with them as they experience (or don't experience) the harshness of their reality. Of the many powerful static shots making the film something akin to an experience, rather than a straight story, there are two that linger on Keng-sheng, illustrating his desperation as well as what very well may be his madness. The aforementioned close-up as Keng-sheng recites the poem begins methodically, and slowly becomes more passionate as the performance shifts from speaking to singing. Holding completely still, fighting against the bracing wind, Keng-sheng slowly succumbs to his emotions, allowing his eyes to well up with tears while his nose leaks like a broken faucet.

The rawness of the performance, and the intimacy of the camera's placement are uncomfortable to say the least, but that is what makes it extraordinary to watch. And yet, as disturbingly striking as Keng-sheng's public performance is, he and Ming-liang double down on a harrowing incident with a cabbage his daughter has dressed as a doll.

After going on a bender, Keng-sheng wakes to find the cabbage doll lying in bed next to his children. He regards the object quizzically at first, but soon begins devouring the leafy plaything, ripping off huge chunks of it with his teeth, chewing some, but letting most of it fall from his mouth. It is an assault; make no mistake, and the ominous portent it suggests gives the appearances of the woman a savior-like flavor. But more than create some sense of cohesion with regard to the relationship between the woman, the children, and their father, the scenes demonstrating the depths of Keng-sheng's character's anguish suggest a universal emotional resonance that can be understood by all viewers on one level or another.

Perhaps because of its lengthy static shots, 'Stray Dogs' is ultimately a film about watching – watching and not reacting, or at least not acting, or taking action. The inaction depicted on screen, the seemingly inert shots that linger for several minutes suggests the fascination viewers have with their subjects, but also implies there is a corrosive disconnect between the two. It is fitting, then, that one of the longest static shots in the film – around 14 minutes in length – is of two people watching something off screen.

This is, without a doubt a complex film that challenges its viewers at every turn. But it is also a startling masterwork (reportedly the director's last film) that generates discussion through its oblique nature. 'Stray Dogs' is haunting and beautiful, and it will stay with you long after it has ended. 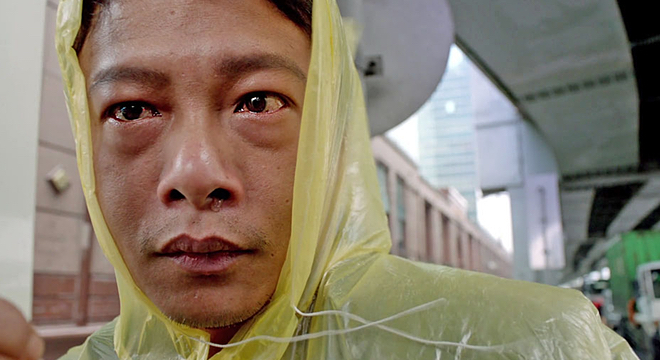 'Stray Dogs' comes from Cinema Guild as a single 50GB Blu-ray disc in the standard keepcase. There are no previews ahead of the top menu, so you are free to start the film, or dig through the extras. In addition to a Tsai Ming-liang short film, and a lengthy "master class" extra the disc also includes a booklet with an essay written by Jonathan Rosenbaum.

Cinema Guild pulled out all the stops on the 1080p AVC/MPEG-4 encoded transfer. The image is startlingly sharp and consistent from start to finish. Fine detail is noticeable in nearly every frame. From facial hairs to small wrinkles, and especially textures in clothing, seemingly nothing escapes the camera's eye. Obviously, these details are more pronounced in close-ups, where slight color variations in skin tone are noticeable, as are the details on fabric and other materials. Backgrounds are also highly detailed and vivid throughout.

Color is used to highlight many aspects of the film, and it looks great as well. Blues, reds, and greens stand out remarkably well, and most colors hold up nicely in darkness, too. Scenes never look over saturated, except when they are meant to, such as one shot where the two children scurry through a busy supermarket, and the warmth of it is turned up a notch to great effect. Contrast is similarly high and consistent. And considering so many important scenes take place at night or in limited light, having the black levels remain strong and full-bodied, without robbing the image of any detail is very important. There is also no evidence of banding or crush anywhere on the disc. White levels remain high, keeping the film from looking blown out.

Overall, this is a stunning transfer that enhances a film totally deserving of such image quality.

The Mandarin DTS-HD Master Audio 5.1 mix delivers a sometimes rich, sometimes-stark listening experience that handles both equally well. Dialogue is very clear, and vocal intonations are easy to pick up. However, the film doesn't spend a lot of time on characters interacting through conversation, so the audio tends to rely on generating an immersive atmospheric experience. It does this by allowing the sound of traffic, wind, or rain to dominate the speakers, and to move in and out of the channels through some very accurate directionality.

Most of the mix is loaded towards the front, with the right and left speaker picking up most of the action, while the sparse dialogue is delivered primarily through the center channel speaker. The rear speakers pick up and deliver some great sounding ambient noise, making a lunch spent alone in a field a richly rewarding listening experience.

In the end, this is a strong mix that delivers big things in small quantities.

'Journey to the West' (HD, 56 minutes) – This is Tsai Ming-liang's 2014 short film (if a 56 minute film can be called short), starring Lee Keng-sheng as a slowly moving monk, and Denis Lavant as a fellow traveller and follower of sorts. The film is composed of about 14 nearly static shots that depict Keng-sheng's brightly robed monk as he moves through the streets of Marseille, one deliberate centimeter at a time. Like 'Stray Dogs,' the journey in 'Journey to the West' is an introspective one that is oblique at times, but never ceases to be visually stunning and emotionally gripping.

Tsai Ming-liang Master Class at the Cinematheque Francaise (HD, 70 min.) – Filmed prior to a screening of 'Stray Dogs,' this discussion by Ming-liang covers everything from his childhood to his influences, and his ongoing relationship with Lee Keng-sheng. The director also goes into his thoughts on how his films compare to other directors like Wong Kar-wai and Edward Yang. This is a fascinating conversation from a master filmmaker, and well worth watching for anyone interested in the works of Tsai Ming-liang.

'Stray Dogs' is a film that has to be seen to be understood – even if you don't necessarily understand what it's trying say right away. But its challenging nature is a feature, not a bug. This is the kind of film you will want to watch over and over again, just to parse new details and consider new possibilities. But in the end, it is a movie that is just yearning to be experienced. It doesn't have to be solved or studied or picked apart; it can simply be watched for its breathtaking beauty and stunning glimpse into the depths of humanity. With near perfect picture, great sound, and some astonishing extras, this one comes highly recommended.

Sale Price 22.86
List Price 34.95
Buy Now
3rd Party 17.99
In Stock.
See what people are saying about this story or others
See Comments in Forum
Previous Next
Pre-Orders
Tomorrow's latest releases