On Any Sunday, The Next Chapter (Dolby Atmos)

Dana Brown is an American surfer and filmmaker, and is the oldest son of filmmaker Bruce Brown. His films include The Endless Summer Revisited (2000) which is made up of unused footage from The Endless Summer (1964). His first all-original film was Step Into Liquid (2003) followed by a documentary on the Baja 1000 titled Dust to Glory (2005). In 2009, he debuted a new film called Highwater during the 100th anniversary of the Santa Monica Pier.

In 1971, the documentary 'On Any Sunday' set what in hindsight could be pronounced as a milestone in the history of motorcycle racing, impacting the sport to such an unanticipated degree that it remains one of the best films on the subject. In the same way director Bruce Brown brought recognition to the world of surfing with 'The Endless Summer,' Brown struck again five years later with a look at the love and enthusiasm for motorcycles, specifically those with a passion of pushing the limits at dangerously fast speeds. Featuring an appearance by racing enthusiast Steve McQueen, the film is 96 minutes of thrilling, free-spirited daredevils and talented, methodical motocross racers explaining to the world their fervent motivation and near-manic relish of riding on two wheels with a scorching, revving engine between their legs. It's a motion picture on the intense dedication to a machine to that offers a genuine sense of freedom.

Over forty years later, filmmaker Dana Brown, son of the aforementioned director, continues his father's legacy with a sequel on how the sport has grown and evolved, aptly titled 'On Any Sunday, the Next Chapter.' Admittedly, the movie is a not a direct follow-up in the traditional sense, as in it took four decades to make another documentary. Dana's film is, in fact, the fourth entry in what is essentially a franchise, with each looking at the sport from new perspectives and slightly dissimilar themes. Here, the focus is interestingly more on the evolution of the sport into a pastime, a sense of community and family among enthusiasts, a glimpse on the motorcycle's impact as a whole in the world, and most significantly, the simple passionate joy of riding. With impressive camerawork, Dana expands a viewer's awareness to the feel of camaraderie and an esprit de corps superseding the usual competitive nature of the individual. 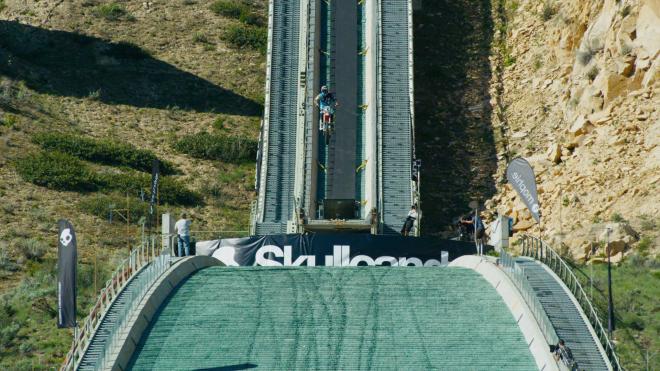 Dana allows a tinge of irony to be clearly understood in that sentiment, possibly because the image of the motorcycle rider remains that of a lone, solitary figure on the open road intentionally falling off the grid. Or at least, that's the somewhat iconic impression continuously echoed in Hollywood and the media. Brown shows that although the sport has evolved with more daredevil tactics and death-defying risks, such as those stunts performed by world-record breaker Robbie Maddison, the spirit and zeal remains the same and endures within the family, suggesting that bonds are basically strengthening by a shared love for motorbikes. Along with Maddison, motorsports competitor and Nitro Circus creator Travis Pastrana offers lively discussion of enjoying his passion with family and friends, and Carlin Dunne spends quality time with his father either at the family-owned Ducati shop or riding across the Bonneville Salt Flats.

At times, 'On Any Sunday, the Next Chapter' feels like some sort of promo video with lots of name-dropping, showcasing a great deal of talent and sports events with none ever given a good amount of attention to seem focused. In truth, much of the footage and many of the interviews play like short vignettes almost haphazardly pieced together, failing to show the connection of one discussion to the next. On the other hand, the documentary never actually promised concentrating on a single idea or athlete outside a shared love for the sport of motorcycles, as it jumps around between various major events. And the film does, however, come with a central theme, a motif that unites all the interviews and exhilarating footage. Even in the world's most highly competitive race, the MotoGP, competitors Marc Márquez, Dani Pedrosa and Valentino Rossi can still form a familial-like bond because of a shared love for riding motorcycles.

Hannover House through Anchor Bay Entertainment brings 'On Any Sunday, the Next Chapter' to Blu-ray on a Region Free, BD25 disc inside a blue eco-cutout case. At startup, the disc goes straight to an animated menu screen with the usual options, full-motion clips and music.

The motorcycle-sport documentary shreds the screen with a spectacular, demo-worthy 1080p/AVC MPEG-4 encode, exposing every ball of mud, tiny flying debris from wrecks and every bead of sweat on the faces of racers with crystal-clear clarity.

With spot-on contrast and brilliant, crisp whites, viewers can gawk in amazement at the stunts and daredevils as individual lines appear discrete and razor sharp. Every leaf and blade of grass is distinct. The smallest clump of dirt on the muddy roads is diverse and separate. The years of use and wear on the racetracks can be seen from a distance while the lettering on each bike is perfectly legible, along with the bruises and scratches from accidents. Threading and stitching in the clothing is detailed, and facial complexions appear healthy as every pore, wrinkle and scar is made plainly visible. The video is bathed in a sumptuous array of colors, particularly the lavish primaries, and black levels are inky rich and opulent, providing the 1.78:1 image with a stunning three-dimensional feel, making it an awesome sight to behold on a big screen.

The documentary sequel revs up with an exciting Dolby Atmos soundtrack that satisfies but doesn't quite meet the expectations of the new sound format. Compared to what we've heard thus far from the likes of 'Transformers: Age of Extinction,' 'Teenage Mutant Ninja Turtles (2014)' and 'Expendables 3,' this latest release with the object-based audio option doesn't compare, which is not to say that it's bad. But rather, the producers didn't really take much of advantage of the possibilities, especially given the many amazing scenes of loud racing, the opportunities were frankly endless. And granted, a documentary won't every compare to an action flick, but the filmmakers missed the chance for making something truly exhilarating and immersive for home audio.

Admittedly, the rears were often employed for delivering a variety of discrete, well-placed effects. A handful of scenes, especially, came with subtle ambient noises in the background, but they were far and few in between. The start of the movie teases with various sounds that fluidly and convincingly pan from the front of the room to the back and overhead, almost as if motorcycles were literally driving through the house. But once in the movie proper, such impressive activity ranges from light and minimal to enveloping moments during races. Basically, the movie fails to really ever generate that overwhelming dome-like soundfield we've come to expect, and the music is ultimately the best part of the track. Even the quieter sequences in 'John Wick' sounded better than the loudest here.

In the front soundstage, imaging feels broad and spacious with excellent panning effects, creating a splendidly engaging wall of sound. Dynamic range and acoustics are detailed and discrete, allowing for the tiniest clump of dirt and the minutest of debris from accidents to be distinctly heard flying across the screen. The low-end is plentiful and weighty, providing the music with a good deal of appreciable depth and response. Dialogue is precise and well-prioritized above the ruckus and mayhem. Despite some very small disappointed in the overall quality of the Atmos track, the lossless mix is nonetheless exciting and wildly entertaining.

Continuing in his father's legacy, filmmaker Dana Brown revisits the motorcycle racing sport Bruce Brown filmed as his subject matter over forty years ago. In the aptly titled 'On Any Sunday, the Next Chapter,' he explores how the sport has grown and evolved since with various interviews and footage touching on the familial camaraderie of bike enthusiasts and athletes. The Blu-ray arrives with reference-quality video and a generally satisfying Atmos presentation. Supplements are light but enjoyable, making the overall package one for sports fans.

Sale Price 23.95
Buy Now
3rd Party 23.95
In Stock.
See what people are saying about this story or others
See Comments in Forum
Previous Next
Pre-Orders
Tomorrow's latest releases