The Sum of All Fears

Hi. My name’s Ken Brown and I’m an Affleckoholic. It’s not something I like to talk about… when I try to tell people that Affleck’s work in ‘Gigli’ wasn’t as bad as critics made it out to be, or that he managed to bring a bit of wit to a trainwreck like ‘Surviving Christmas,’ I always encounter the same stares, sneers, and snickers. It’s a tough addiction to deal with in a world that’s turned its back on the would-be Matt Murdock, but I still hold out hope that Ben will eventually get his career back on track. Sure, he’s spent the last ten years slogging his way through junk like ‘Reindeer Games,’ ‘Pearl Harbor,’ and ‘Man About Town,’ but let’s not forget this is the same guy who turned in impressive, late ‘90s performances in ‘Shakespeare in Love,’ ‘Chasing Amy,’ and, of course, ‘Good Will Hunting.’

One of the more divisive films in Affleck’s critically-panned canon is ‘The Sum of All Fears,’ Paramount’s first attempt to reboot the Jack Ryan film franchise for a new generation. Loosely based on the Tom Clancy novel of the same name, Ryan (a furrow-browed Ben Affleck) has been reimagined as a young intelligence analyst whose knowledge of the latest Russian president (Ciaran Hinds) earns him a trip to the Kremlin with CIA Director William Cabot (Morgan Freeman). However, when Ryan and Cabot realize the Russian officials have lied to them about three missing nuclear technicians, an operative named John Clark (Liev Schreiber) is dispatched to get to the bottom of the deception. Before long, Ryan discovers that a neo-Nazi named Richard Dressler (Alan Bates) has stashed a Russian-made nuclear bomb in Baltimore in the hopes of starting a cataclysmic conflict between Russia and the United States. Racing against time, Ryan tries to prevent an explosion, warn the President (James Cromwell) of the danger, and thwart a manufactured nuclear war.

Despite my affinity for Affleck, I rather enjoyed ‘The Sum of All Fears.’ While it has little to do with the novel that inspired it, it isn’t just a “slick-looking mess” like some critics have suggested. Evaluated on its own terms, director Phil Alden Robinson’s revamp is a solid thriller that takes quite a few brave and unexpected turns (a big one in particular). The screenplay effortlessly balances it’s intrigue and action, adds palpable tension to the hunt for the nuclear bomb, and strips the characters and story of extraneous subplots that would cloud the central conflict. At first I was worried the film would feel hollow next to meatier Clancy fare like ‘Clear and Present Danger,’ but it actually works and keep things moving along at a brisk pace. More importantly, Freeman and Cromwell inject legitimate gravitas into a script that could have been trite and cliché, Schreiber and Bates deliver respectable supporting performances that give the film more realistic interpretations of a superspy and a Bond Villain-of-the-Month, and notable faces like Bruce McGill, Philip Baker Hall, and John Beasley help modernize Ryan’s world and make it more authentic.

And Affleck? All bias aside, the young actor does a fine job channeling Harrison Ford’s bewildered action-hero mannerisms and Alec Baldwin’s defiant charm. The only scenes that sag involve Jack Ryan’s girlfriend, Dr. Catherine Muller (Bridget Moynahan) -- Moynahan and Affleck’s interactions are passable, but you can tell the screenwriters and the actors considered the relationship between the future Mr. and Mrs. Ryan to be an inevitable plot device that didn’t warrant a lot of investment. Aside from these minor characterization missteps, ‘The Sum of All Fears’ suffers from a few more dehabilitating problems. Its plot developments seem a bit contrived, characters are shuffled around the board as if they’re chess pieces rather than real people, and the third act is a relative disappointment (especially in light of the jaw-dropping, second act clincher). None of these issues particularly ruin the movie, but they do lessen the overall impact and make the film feel more like a by-the-numbers thriller than a Tom Clancy spider web.

As it stands, ‘The Sum of All Fears’ squeaks by ‘Patriot Games’ to become my third favorite Jack Ryan film. I would have enjoyed it more if it offered the double-crosses and character twists that populate ‘Clear and Present Danger’ or the plausible plot developments and performance weight of ‘The Hunt for Red October,’ but I still thought it was a lot better than most people seem to think. While anyone looking for a thought-provoking sequel to the established series will probably be disappointed with Paramount’s efforts, those looking for an above-average thriller and an overhaul of Clancy’s aging character will dig the results. 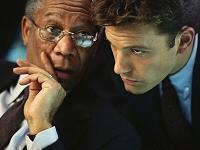 To my surprise, ’The Sum of All Fears’ features the most disappointing 1080p/AVC-encoded transfer of the Jack Ryan Blu-ray releases. It doesn’t suffer from the same technical oddities as ‘Patriot Games’ (and therefore doesn’t deserve the harshest criticism), but it looks terribly over-processed for a six-year old film. Heavy DNR, consistent edge enhancement, and additional sharpening techniques have been applied to the picture, making the image harsh and unnatural while simultaneously scrubbing faces of texture and backgrounds of fine details. The results make the film’s detailing smeared and smudged throughout -- skin is waxy, clothing and fabric look flat, and building surfaces aren’t as refined. Compared to similar titles, this one looks as if it's been waterboarded by an overzealous engineer.

Still, viewers who don’t mind sacrificing considerable fine detail or dealing with sharp edge halos will find the picture is significantly better than its standard DVD counterpart. Colors are more vibrant, stable, and natural than in previous releases, leaving those waxy skintones looking warm and healthy. In fact, there are plenty of scenes that could have been downright amazing had the transfer retained the filmic qualities of its original print. I was also pleased with the film’s attractive and comfortable contrast, its noteworthy shadow delineation, and a series of deep, inky blacks (that only fall victim to crush in three or four shots). Honestly, this is yet another title that will split fans into two camps -- those who aren’t sensitive to over-processing techniques and those who loathe them. Will ‘The Sum of All Fears’ impress your neighbors? Most likely. Will it impress anyone who knows what they’re looking for? Not so much. 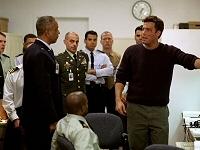 While ‘The Sum of All Fears’ video transfer will give fans a headache, its polished Dolby TrueHD 5.1 surround track is far more reliable. Dialogue is clear and evenly distributed across the front speakers, rear support delivers plenty of immersive opportunities, and dynamics pack a nice punch. The film’s central effects sequence sounds spectacular -- the LFE channel summons a guttural growl as wind and debris hurtle across the soundfield. In fact, the track’s low-end bass tones are generously spread across the entire film and add significant weight and impact to the on-screen action. Ambience is aggressive at times and subtle at others, enhancing explosions with tinkling glass and scattering shrapnel, as well as dropping countless voices into a stadium and a variety of murmurs in every crowded interior.

If I had any issue it concerns the track’s pans and directionality. I would expect overcooked sound effects in a rock-em-sock-em actioner, but I was disappointed to find certain effects crammed into every speaker for effect. I also didn’t expect to find a few voices that jumped from one channel to the next without a smooth transition. While it only happened a half-dozen times, a film that features a dazzling sonic showcase moment shouldn’t stutter when someone walks across a room. Thankfully, my complaints are minor and probably would go unnoticed by anyone who isn’t actively listening for problems. In the end, ‘The Sum of All Fears’ sounds better than it did on DVD and adds some much-needed value to the disc’s technical presentation. 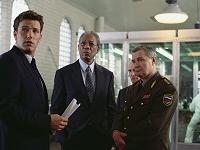 Mirroring the 2003 Special Collector’s Edition DVD, this new Blu-ray release includes a decent supplemental package. The only major downside is that the disc’s two documentaries are presented in standard definition. Even so, Affleck fans will be disappointed by the fact that the notoriously funny commentary-veteran didn’t record anything for ‘The Sum of All Fears.’ Ah well, I suppose it gives me a decent reason to hang onto the Criterion release of ‘Armageddon.’ 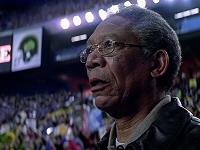 ’The Sum of All Fears’ is a better film than some critics and Clancy fans might suggest. While it nearly abandons its source novel in favor of rebooting the Jack Ryan series, it still has more to offer than your run-of-the-mill thriller. Unfortunately, this new Blu-ray edition isn’t the disc I was hoping for. While it offers fans an impressive TrueHD audio track and a thoroughly entertaining director/author commentary, it stumbles with an unnatural, over-processed video transfer and a pair of dry documentaries. In the end, fans and newcomers should approach this release with lowered expectations, but still give it a spin to see if it’s worth adding to their shelves.

Sale Price 8.72
Buy Now
3rd Party 3.5
In Stock.
See what people are saying about this story or others
See Comments in Forum
Previous Next
Pre-Orders
Tomorrow's latest releases