The film tells the story of a Spanish soldier (Franco Nero), who falls in love with a gypsy (Tina Aumont) only to end up deserting the army and being chased into the border lands, where he joins the gypsy smugglers to rob money for a journey to America. But it turns out his love has a husband (Klaus Kinski) and is only using him again and again....

Luigi Bazzoni's 'Pride and Vengeance' may star the now-legendary Franco Nero ('Django') and Klaus Kinski ('Nosferatu the Vampyre'), but it's Tina Aumont's performance as the hellcat seductress Carmen who ultimately steals the show. From the first moment she walks into the frame, a black headscarf encircling her oval face, Aumont is instantly the main attraction, a stunningly gorgeous bombshell with a doe-eyed innocence and a cherubic smile capable of bewitching even the most hard-bitten, cold-hearted of men. At the height of her career when she notoriously appeared on Playboy showing off her luxurious ankle-length hair, Aumont made a name for herself as the picture-perfect embodiment of a femme fatale in European cinema, an endlessly flirtatious vixen with the gift of making men swoon with a simple glance and hypnotize them into doing her bidding. Right from the start as she stands on the other side of a prison-like fence, we know she's trouble but also incredibly irresistible.

Bazzoni kicks off the excitement and drama in his fascinating western romance with Aumont's splendiferous eyes setting their target upon Don José (Nero), a sergeant in the mounted infantry with police duties. While stationed as a guard at the entrance of a cigar factory, Aumont's Carmen brandishes her deviously alluring smile, instantly attracting the attention of José. Similar to Clint Eastwood's personality, Nero is another actor with a unique set of eyes, a pair of crystal-clear, radiant blue peepers that pierce through the soul and at once imply the man glaring at you means deadly business. Bazzoni knows exactly what he's doing when pushing in on José's eyes looking from beneath his hat to catch his first glimpse at the woman that is soon to be his downfall. For Nero to easily fall for her come-hither gaze, Carmen must be an otherworldly enchantress — she's the death of men in the mind of fans. 'Django,' the icon of Italian western cinema, has succumbed to the beguiling ways of the gypsy beauty. 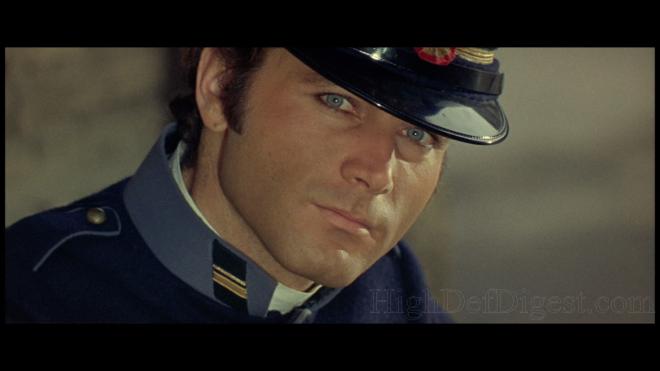 The script, co-written by Bazzoni and Suso Cecchi d'Amico (amazing screenwriter of such classics as 'The Leopard,' 'Bicycle Thieves,' 'Casanova 70' and Franco Zeffirelli's 'The Taming of the Shrew'), is based on Prosper Mérimée's classic novella Carmen, a tale that has been translated into a variety of mediums, most famously Georges Bizet's opera. Though the setting  in the south of Spain begs the question of whether the move falls under the western genre, the production is nonetheless thought of as a western interpretation of that romantic tragedy. After losing his military rank for unwittingly aiding Carmen in a couple criminal activities and killing his superior in a fit of jealousy, José goes from Basque hidalgo, a nobleman of high stature, to a common person forced to join Carmen's band of outlaws for survival. It's here that our once potential hero discovers Carmen's husband (Kinski), revealing how far her slithering charms extend and making José, as well as the audience, finally doubt her intentions and promises of love.

While not on the same level of action and gratuitous violence as other "Spaghetti" westerns, 'Pride and Vengeance' remains one of the smarter and more elusive horse operas of the period, primarily because at the center lies a woeful tale of love, heartbreak and obsession. Cleverer still is the title being a tongue-in-cheek play on Jane Austen's masterwork Pride and Prejudice, if some readers haven't already caught on to that, hinting at Bazzoni and d'Amico were aiming at. While inspired by one classic story, the filmmakers borrow the themes of another, particularly that of wealth and class divisions. From José's experience, this is most apparent, as he quickly learns the fall from social grace is simpler than previously believed. But on a more interesting note, the plot also touches on ideas of nature versus nurture, or rather the importance of upbringing to one's character as in Austen's book, when talking about Carmen and her gypsy charms. The film doesn't delve deep into the subject, but that they're brought up at all makes for an interesting watch with this underrated Italian western.

Blue Underground brings Luigi Bazzoni's 'Man, Pride and Vengeance' to Blu-ray on a Region Free, BD50 disc housed in the standard blue case. At startup, viewers are taken straight to the usual selection of menu options with full-motion clips and music playing in the background.

The Bazzoni western romances and seduces on Blu-ray with a somewhat indecisive 1080p/AVC MPEG-4 encode. At first glance, the video is quite impressive with several sharply well-defined sequences, making it the best the film has ever looked. Individual hairs are distinct, stitching and wrinkles in costumes are apparent, and small pebbles on the dirt trails and the tiniest imperfections on buildings are plainly visible. However, there is clear evidence of digital noise reduction having been mildly applied since much of the presentation lacks the heavy grain structure expected of the 2-perf Techniscope film stock. Although flesh tones appear natural, facial complexions are bit too smooth. The rest of the high-def transfer thankfully comes with strong black levels and excellent contrast while primaries are accurate, and secondary earth-tones are cleanly rendered.

Blue Underground offers this horse-opera adaptation of the classic novella with a pair of pleasantly satisfying DTS-HD MA mono soundtracks: English and Italian. While both are, for the most part, fairly similar and viewers can't go wrong with either one, I found myself enjoying and preferring the Italian version. Comparatively, the English dub comes with a bit more hissing and some of the higher frequencies are not quite as well defined. In Italian, the lossless mix displays a slightly stronger sense of presence with broader imaging and distinct clarity in the mid-range. In either case, both tracks deliver a great soundstage with very good and intelligible dialogue reproduction. Bass is sadly missing in both versions, yet fans won't likely find much else to protest about.

Although Luigi Bazzoni's 'Pride and Vengeance' stars Franco Nero and Klaus Kinski, it is Tina Aumont's performance as the hellcat seductress Carmen who ultimately steals the show. Her character is essentially at the center of the mayhem and melodrama, seducing even the most reluctant and strong-willed men to do her bidding. The Blu-ray arrives with strong but somewhat questionable video and a satisfying audio presentation. Supplements may appear light, but they make for a great watch and addition to the overall package, which cult enthusiasts will love to own.

Sale Price 15.98
List Price 19.95
Buy Now
3rd Party 13.99
Usually ships within 5 to 6 days.
See what people are saying about this story or others
See Comments in Forum
Previous Next
Pre-Orders
Tomorrow's latest releases