What ever happened to Harrison Ford? I’m not talking about the self-referential actor who grimaced his way through ‘Hollywood Homicide’ or cashed out with ‘Kingdom of the Crystal Skull’ (sorry fans, it lost me the moment Indy stumbled out of the refrigerator)… I’m talking about the legendary performer who commanded the screen in ‘Air Force One,’ crafted a pitch-perfect reimagining of a beloved character in ‘The Fugitive,’ and delivered the goods as a relatable CIA official who takes matters into his own hands in director Phillip Noyce’s ‘Clear and Present Danger.’ Where’d that guy go?

Based on the Tom Clancy novel of the same name, ‘Clear and Present Danger’ follows series mainstay Jack Ryan (Harrison Ford) -- now Deputy Director of Intelligence -- as he fights to survive the political machinations of an amoral CIA director named Robert Ritter (Henry Czerny), a corrupt National Security Advisor named James Cutter (Harris Yulin), and the President himself (Donald Moffat). After convincing a congressional committee to grant the CIA funds for intelligence operations in Colombia, Ryan discovers that Cutter and Ritter have been conducting secret military operations against a vicious drug cartel. Ryan must ascertain the nature of their dealings, enlist the help of a field operative (Willem Dafoe) who Cutter and Ritter manipulated, and save a black-ops squad that’s been left for dead behind enemy lines.

My apologies if I made a slow-burning political thriller like ‘Clear and Present Danger’ sound like a guns-n-explosions actioner, but it would take three or four paragraphs to outline the various subplots, double-crosses, and international intrigue that undergird every scene in the film. So much material has been exorcised from the novel that one might expect a simplistic story, but nothing could be further from the truth. Honestly, the sheer scope of the film can be a bit daunting and will lose anyone who steps out of the room for more than a minute. Even so, Noyce keeps the film’s countless narrative threads precariously tight and doesn’t lose sight of the central conflict. He hurls dozens of characters, motivations, and ideals at the screen, but wisely keeps his camera swirling around Ryan, Cutter, Ritter, and the President. While the film does occasionally drift into super-agent vs. the world territory, Noyce tones down scenes that risk transforming Ryan into James Bond and keeps his hero grounded in relative reality and plausible politics.

Thankfully, Ford is given more opportunities to make Ryan a proactive force (as the character is in ‘The Hunt Red October’) than a victim turned reluctant hero (as he is in ‘Patriot Games’). Even the chattiest scenes crackle with the actor’s patented average-joe intensity -- when Ford barked, “How dare you, sir” at the President, I felt it in my gut and immediately realized how refreshingly noble and genuine it sounded. On the other end of the spectrum, Czerny, Yulin, and Moffat make for some great, scene-chewing villains. Each character has his own agenda, but the extent of their collective influence and power gives the entire story a palpable volatility that keeps things barreling along to the subtly climactic end. The only weak performances come from the conventional Colombian soldiers and cartel leaders but, of course, this isn’t the sort of film that needs them to be anything but formulaic stand-ins.

My heart still belongs to ‘The Hunt for Red October,’ but ‘Clear and Present Danger’ is an engaging political thriller that manages to keep its quiet double-crosses as compelling as its explosive action sequences. While some may find it a tad slow and overblown for their tastes, I couldn’t help but get caught up in Ryan’s quest to defend his forgotten countrymen, uncover the truth, and fight for his ideals -- three things that are sadly missing from modern politics. 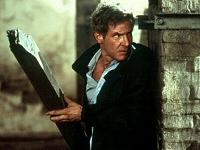 The Blu-ray edition of ’Clear and Present Danger’ features a decent 1080p/AVC-encoded transfer that looks pretty good, despite a few fundamental problems. After a rather shabby, poorly-contrasted opening sequence, Noyce’s thriller hits its stride with incredibly vibrant colors, solid blacks, and fairly revealing delineation. In fact, the scenes in Colombia pack the screen with lush jungle greens, bold flashes of red, and clean blue skies. While the film’s warm skintones appear to be a bit over-saturated, the actors don’t look as drab or sickly as they do on the standard DVD. Detail is also worth mentioning. Sure, the transfer’s improved sharpness can mainly be attributed to the disc’s increased resolution, but grass and foliage, on-screen text, and skin textures offer clarity that simply isn’t available in previous releases. While this certainly isn’t the next great catalog titlee, it should please casual fans looking for a smooth and shiny upgrade.

However, while the transfer isn’t as problematic as the one Paramount slapped together for ‘Patriot Games,’ it still suffers from a bit of overzealous post-processing work. DNR reduces grain and noise, but inadvertently scrubs away some of the print’s fine texture and outright smears the backgrounds of a few scenes. Edge enhancement makes an appearance as well, lining objects with thin halos that stand out against white walls and bright skies. Finally, element-specific sharpening finishes off Paramount’s sucker punch and occasionally makes foreground objects appear disjointed from the backgrounds. To get a glimpse of all three techniques assaulting the image at once, check out the training sequence where Willem Dafoe and Benjamin Bratt try to spot a sniper in a ghillie suit.

Sure, everyday viewers may not be sensitive to these issues, but that doesn’t mean they should be satisfied with less. While we’ve come a long way from the days of 4:3 televisions, pan-and-scan flicks, and subpar video quality, we shouldn’t stop demanding more. Don’t get me wrong, boycotts, grumbling, and angry complaints accomplish nothing -- I think fans of the film should nab a copy of ‘Clear and Present Danger’ simply because it’s the latest and greatest version available. However, over-processed transfers will continue to appear unless consumers (yep, those who actually check out a disc instead of looking at screen shots online) politely educate, demonstrate, and explain the benefits of a filmic picture. Studios aren’t inherently lazy and, contrary to what some believe, don’t enjoy cutting corners. At the end of the day, they want their movies to appeal to fans, catch the attention of newcomers, and sell plenty of copies. If people want more natural transfers, they’ll get em. If they don’t see the problems with DNR and EE, we’ll continue to get DNR and EE.

Long rant short, graciously contact studio reps and let them know what you’re looking for, politely guide your fellow Blu-ray fanatics to screenshots that show them how DNR and EE saps detail from a picture, and reasonably ask for what fans deserve… the best presentation of a film a studio can possibly muster. Ultimately, that’s what we all want, isn’t it? 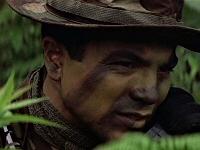 ’Clear and Present Danger’s Dolby TrueHD 5.1 surround track didn’t exactly blow my mind, but it did manage to faithfully and accurately present the film’s aging sound design. This is the chattiest Jack Ryan entry of the bunch and, to its credit, the mix holds its own with crisp, well-prioritized dialogue (that only falters during a few chaotic military engagements in Colombia), respectable rear speaker support, and satisfying dynamics. While the LFE channel doesn’t have a slew of standout sequences, it still does a great job enhancing the film's intermittent gunfire, explosions, and helicopter fly-bys (particularly in the third act). Likewise, the surrounds may not be aggressive enough to create a wholly immersive experience, but some notable Colombian sequences deliver impressive rear soundfield movement.

Unfortunately, the resulting sonics are a tad uneven and inconsistent. Ambience sometimes seems like an afterthought in the film’s various interiors, leaving a void any time the story drifts away from the White House or Escobedo's property. Worse still, acoustics are hit-or-miss, oftentimes retreating from the proceedings rather than supporting the centralized conversations and action scenes. Ultimately, this TrueHD mix sounds substantially better than the standard DVD’s heavily compressed audio, but it doesn’t quite measure up to better lossless tracks on other Blu-ray catalog releases. Granted, fans familiar with the talkative nature of this thriller won’t have any serious complaints, but newcomers will wonder why the audio isn’t as involving as the film’s political double-crossings. 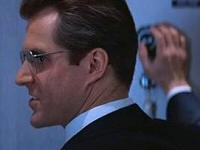 The Blu-ray edition of ‘Clear and Present Danger’ includes the same lackluster supplemental package as its standard DVD counterpart. Aside from the film’s theatrical trailer (HD, 2 minutes), the lone feature on the disc is a bland, basic cast and crew EPK called “Behind the Danger” (SD, 26 minutes). Everyone from director Phillip Noyce to actor Harrison Ford show up to share their thoughts on the production, but no one really offers a compelling exploration of the differences between the book and the film, the real politics behind the fiction, or the interpretation of the characters presented on screen. Still, it’s a decent addition considering the fact that Paramount could have just released a bare bones disc. 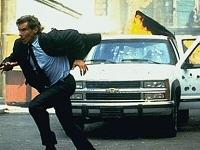 While not a perfect or timeless classic, ’Clear and Present Danger’ is an excellent political thriller in its own right, and a successful entry in the Jack Ryan series that really nails the tone, intensity, and conflicts found in Clancy’s novels. Unfortunately, this Blu-ray release is a mixed bag. It features a decent lossless audio track, but misses the mark with an over-processed video transfer and an emaciated supplemental package. To be blunt, this one is risky for anyone who isn't an ardent fan. The Blu-ray edition may offer DVD owners a sizeable upgrade, but it's not a sure investment. Give it a rent, see if the over-processing bothers you, and purchase accordingly.

Sale Price 7.99
Buy Now
3rd Party 4.4
In Stock.
See what people are saying about this story or others
See Comments in Forum
Previous Next
Pre-Orders
Tomorrow's latest releases